New Contemporaries has supported emerging artists from British art schools since 1949. Democratic and accessible, the open-submission exhibition provides a professional platform for art graduates. Figurative pioneers David Hockney and R.B. Kitaj made 1961 a stellar year whereas Turner-prize winning artists Damien Hirst and Mark Leckey were among the cool conceptualists of 1989.

The annual exhibition has come a long way, from its initial year when named “Young Contemporaries” and endorsed by specialists like National Gallery director Philip Hendy, to the controversial student-run show at the Royal Academy in 1970. More recently, it has invited an outside team from the arts profession to be selectors. This year, unusually, no painter was on the panel: it included Iranian-born sculptor Nairy Baghramian, British film-maker of Irish and Palestinian descent Rosalind Nashashibi, and London-based conceptual artist duo Cullinan Richards.

Selectors were not aware of the entrants’ art schools or nationalities during the judging process. From over 1,500 submissions, a select group of artworks was gathered by a van travelling around the country and then viewed during a five-day period. Finally, 29 artists were chosen for the nationally touring exhibition. It was first situated in an old sorting office at the Liverpool Biennial before it was skilfully edited down to fit the cool white space of the ICA.

The majority of artists hail from top London schools such as the Royal College of Art, reflecting the capital’s fantastic reputation on the global stage. Yet a number originate from foreign shores, including Hong Kong, Norway, Poland, Switzerland and Togo, and display a maturity of thought and process. As ICA curator Matt Williams observes: “This year, the work suggests a level of confidence, plus an academic knowledge and an awareness of the international art scene.”

Williams explains that curating a pre-selected body of work presents a unique task: “Due to the nature of the process, ie receiving pre-selected work, it’s difficult to curate the exhibition per se, so often the curatorial decisions are intuitive. Obviously while taking into consideration the form, colour and gallery space. It’s about trying to play to the artist strengths, especially given emphasis upon painting.”

The tactile versatility of this traditional artistic medium is seen in the exotic mix of paint and collage in They Visited Twice (2012) by Freya Douglas-Morris, abstract oil on raw linen Untitled (2012) by Tyra Tingleff, and acrylic and watercolour Fronds (2011) by Jan May. Prints are affective in their range, from the classically solemn Portrait of Silenus 2 (2012) by Samuel Taylor to the wittily comic Nimm lieber ein Taxi! (2012) by Oliver Osborne. And videos are remarkably engaging: Tony Law invites one to take an elegiac walk in Strolling (2012) whereas Simon Senn documents the gritty reality of life in the Soweto township in South Africa in Meadowlands Zone 1 (2010). However, through the video loops and marks on canvas, there is an enduring sense of that decidedly modern aesthetic of repetition in this snapshot of art graduates. This makes it recommended viewing. 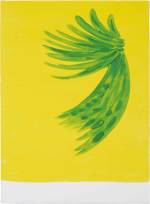 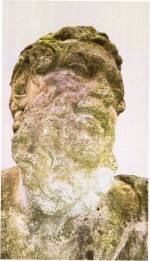