Bill Lynch: The Exile of Dionysus

Bill Lynch: The Exile of Dionysus

Lynch was overlooked in his lifetime, his career cut short by an early death, but this small exhibition shows the power of this enigmatic artist’s works 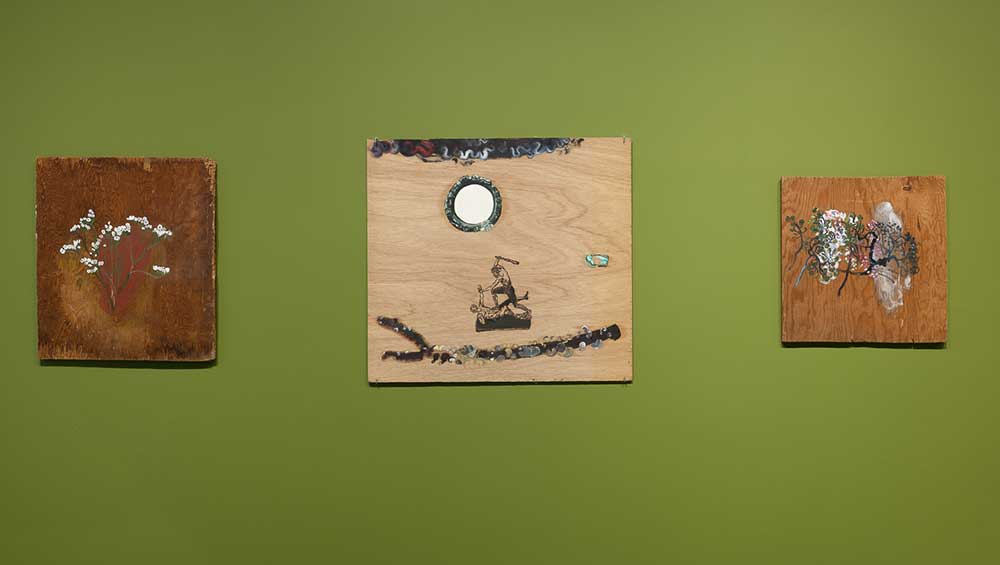 This small exhibition of works by the American artist Bill Lynch at Brighton CCA is the first time Lynch’s work has been shown in a UK institution. Although it contains just 15 paintings, it nonetheless gives a sense of what this enigmatic artist achieved in his lifetime. Born in Albuquerque in 1960, he trained at Cooper Union School of Art in New York’s East Village and when he died in 2013, aged 53, his work had never been exhibited. It is only thanks to his friend and fellow-student Verne Dawson, who was a year ahead of Lynch at art school, that the work came to light at all.

At Cooper Union, Reuben Kadish was an important teacher for Lynch. Kadish’s own work was in a primitivist style in clay and bronze, and he was close to Jackson Pollock, Philip Guston and David Alfaro Siqueiros, personally and professionally. Dawson recalled Kadish sharing a wide range of interests in the classes that he and Lynch attended, from Benin bronzes to laser beams, from the Jantar Mantar, an astronomical garden observatory in Jaipur, to images of the virgin in cave art. Arthur Corwin was another important teacher for Lynch at Cooper Union. As well as being an artist, Corwin was a civil engineer and an architect. He taught several classes, including Art in Mathematics, which Dawson mentioned as being significant for himself and Lynch.1 Cooper Union’s In Memoriam for Corwin reads: “This course will cover the prehistoric development of cognitive thinking, the origins of the abstract languages of the arts and sciences and their lingering influence on the symbolic perception of modern man.”2 As well as the mathematical, Corwin also taught the calendrical content of art – photographs show him with a tarot calendar, for instance. Given Corwin’s framing of art in this way, it is not surprising that the class was so attractive to Lynch. In the midst of these diverse influences at art school, Lynch further developed his own interests in folklore, astronomy, and mythology. In those early years in New York, and later in North Caroline and elsewhere, Lynch also drew on the natural environment, his reading of art history and his many visits to museums. Still, Lynch’s work, like the man himself, did not fit in with the New York art scene of the time. He and Dawson were both interested in the past in different ways. While Dawson’s anthropological eye looked to the prehistoric past to create fantastical landscapes and cosmic visions, Lynch looked to Chinese painting and the Chinese masters such as Zhao-Shao’ang (1905-98) of the Lingnan school of painting, among a host of other influences. 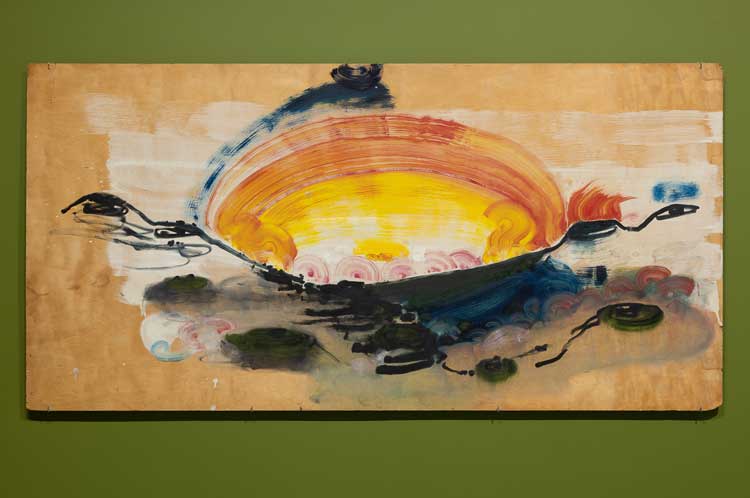 Lynch’s paintings are deceptively simple. With a particular economy of means, he painted birds, branches, blossoms and more, directly on to plywood with, it seems, as few strokes of his brush as possible.  While the use of repurposed plywood was partly an economic decision on the artist’s part – his finances did not stretch beyond that – he took full advantage of its properties so that there was a kind of “truth to materials” at play as he incorporated knots, marks and grain into his compositions. The Exile of Dionysus (the Greek god of wine, pleasure, festivity, madness, ecstasy) is a perfect title for this exhibition. Lynch was overlooked, or exiled, in his lifetime. He was diagnosed with schizophrenia, loved rock and roll, drank malt liquor and smoked pot. It is very clearly an exhibition of two halves. 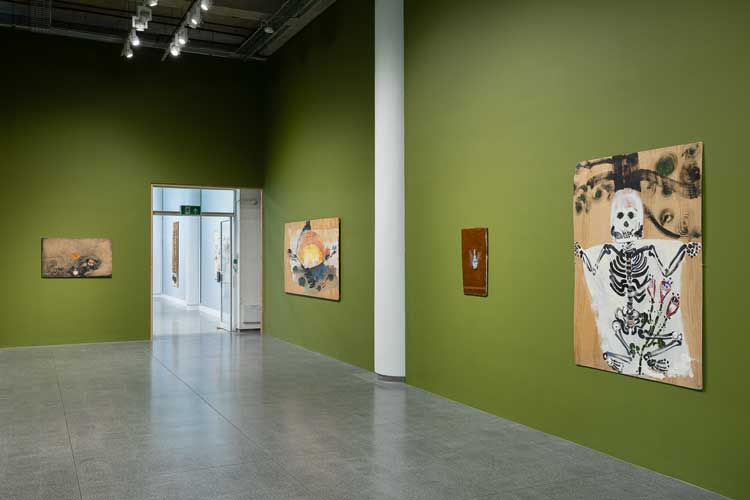 The first half takes 10 works by Lynch and hangs them together on walls painted in a deep green that supports the delicate scenes of vegetation and wildlife, alongside others of mythology and ancient cultures. When I visited, this gallery space felt like a cool, verdant refuge from the scorching weather outside and, despite the intimacy of Lynch’s paintings, I felt as if I were surrounded by damp vegetation. Few of the paintings have titles or dates, so it is difficult to single out particular works. However, the very first painting in the exhibition, No title (Silver Dollar Branches) (undated), seems to glow in its rendition of this little plant, perfect in its imperfections and life-affirming too. Likewise, No title (Recto: Garden with White and Blue Flowers, Verso: Garden with Pink Flowers) (undated), is just the sort of cool green vegetation that draws you in to lie beneath its protective shade. 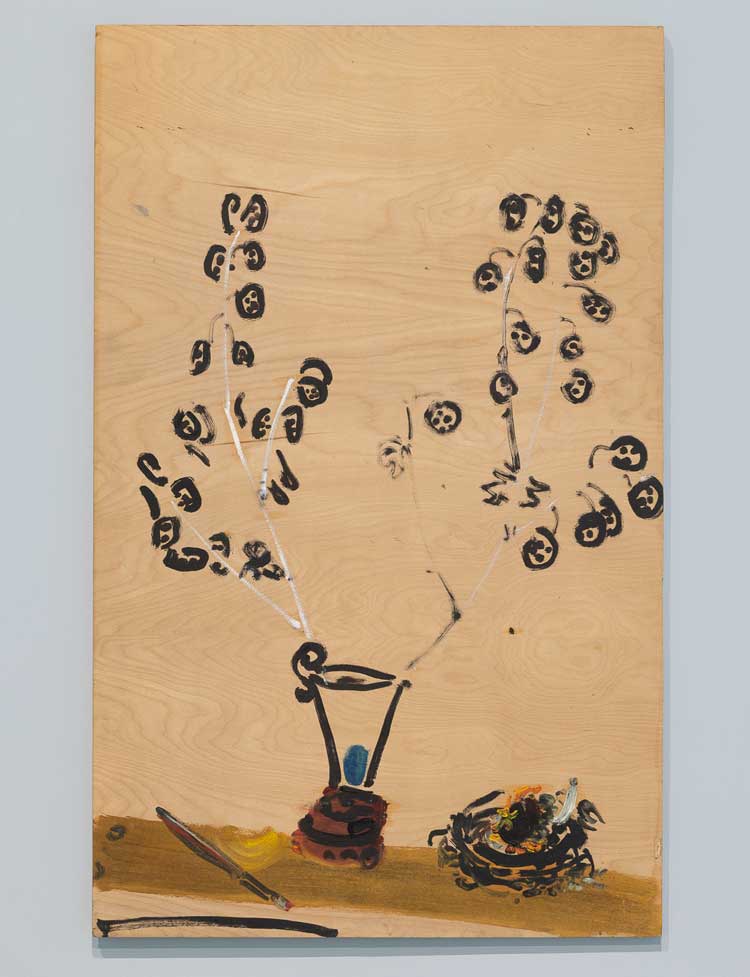 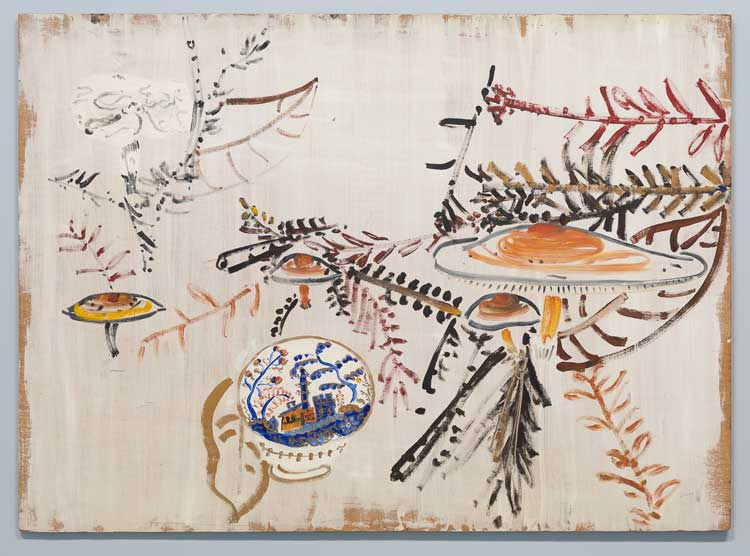 The second part of the exhibition contains five works by Lynch, all referencing his interest in Chinese painting. Here, I was especially taken by Tea Cup on Forest Floor (1993) and No title (Snow on Branch) (undated). There is clear continuity between the works in this gallery, but with only five paintings in a what felt like a vast and rather barren space, especially with its unsympathetic grey walls, this half of the exhibition felt unfinished, truncated in a manner that was frustrating and even uncomfortable.

Yet, as I reflect on it now, perhaps that is what was intended. Lynch was overlooked and exiled in his lifetime. His career ended prematurely at a relatively young age, brought to an abrupt close. He was not part of the art scene of the time, but in a wilderness of sorts, an experience that is perhaps conveyed by the starkness of individual paintings in this space, their sparse appearance on the gallery walls and the coldness of the walls themselves. This clever strategy takes a handful of paintings, puts them in a huge space, and creates the feeling of exile. This is not a pleasant feeling to experience, but it is worth it to engage with such a unique body of painting.