The Welsh artist’s London show is a cartoon, model and animation-fuelled parody of pretentious artists, curators and architects, set in the tranquil galleries of Southwark Park 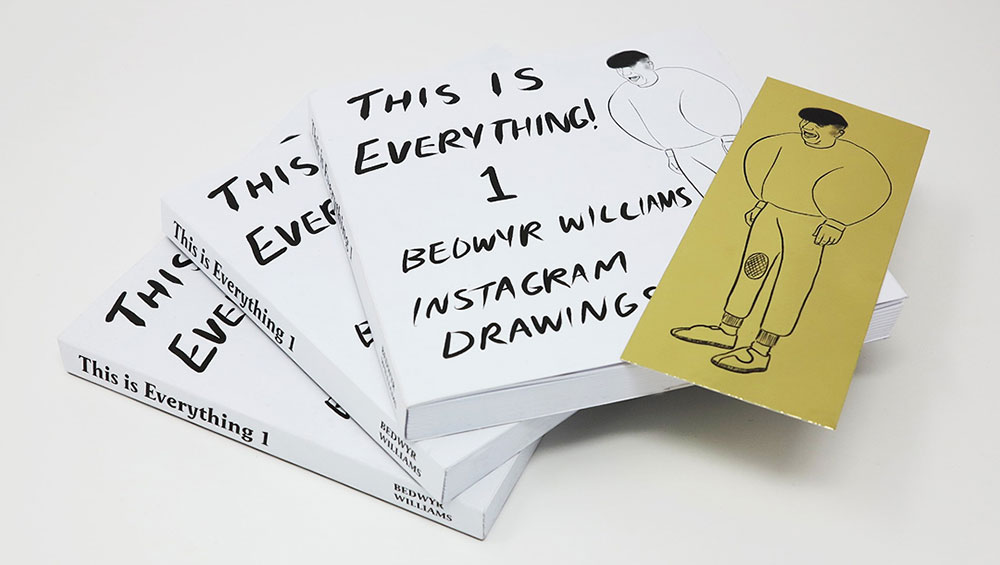 Hubris is very much the stuff of Bedwyr Williams’ art. The cartoons on his Instagram account – he has a following of more than 14,000 – are known for ripping to shreds the overweening self-confidence and pretention of artists, curators, architects and pretty much everyone in the cultural community.

Fans of this artist’s compulsive, mocking wit and drawing style have much to celebrate in his show at Southwark Park Galleries, spread over two sites. In the Lake Gallery, large display tables are laden with the last few years’ Instagram highlights – the fruit of a decision to create a new drawing every day – which are also available for coffee table (or loo-side) display via a new book: This is Everything 1: Bedwyr Williams Instagram Drawings.

Here is the “London based, ten shows a day tadpole head know all”, complete with brutal haircut and prestige gallery tote bag; here is the “Artist duo working on ambitious and shit VR project for the elderly”, (as one of them earnestly simulates visual and mobility impairment with blindfold and cane). My personal favourite is: “Architect’s dad taking care as he descends from son’s mezzanine bed” (cue elderly foot emerging from amply trousered legs gingerly reaching for the top rung of an enormous ladder).

But how does satire achieve real bite, that perfect balance of bile and wit? What makes it art? How does one avoid simply poking fun at easy targets? When does laughing at others’ – or one’s own – foibles generate that joyful recognition of an arrow of truth hitting home rather than the cringe at seeing your own or others’ worst instincts exposed?

Williams (b1974, born and lives in Wales) has previously blended his satirical streak with daft and surreal elements, framing his jibes and crushing judgments within the playful realm of artistic imagination. The Gulch, his show at the Barbican in 2016, was a fabulous send-up of the Ikea showroom lifestyle parade – one bizarre fantasy room set after another. For his Artes Mundi presentation in Cardiff, as one of the shortlisted artists for the 2017 prize, he displayed a potent mix of cynicism and compassion with his hyper-real, CGI-rendered film of a starchitect-studded, testosterone-fuelled Welsh valley regeneration project, undercut by his gentle, lilting Welsh tones narrating the thoughts of its creators and participants.

Since that moment, the artist tells me over the phone: “Things have changed quite a bit and I haven’t exhibited for quite a while. I started looking at what artists were going on about on Instagram. I realised there was this really weird fakeness (in their reactions), this blowing smoke up each other’s arses: ‘Love this!’; ‘Hoping to catch the last day of your show!’; ‘Beautifully installed’ - all this hyperbolic praise. Or liking pictures of curators’ children you’ve never met. What’s weird is, I’d never thought of artists as being that way. My experience of artists is to be quite mean. You have to have a fighting personality to do it in the first place. Nobody wanted you to be an artist. It’s either you’re up the arse of a curator or he’s up yours – metaphorically, of course. It’s a competitive world. I know in the back channels they’re as horrible about each other as they ever were. If that’s not ripe for having fun with, I don’t know what is. My thing is that I never make it about actual individuals. There are people I’ve met or who have my worst qualities injected into them. I consider myself no better than them.” 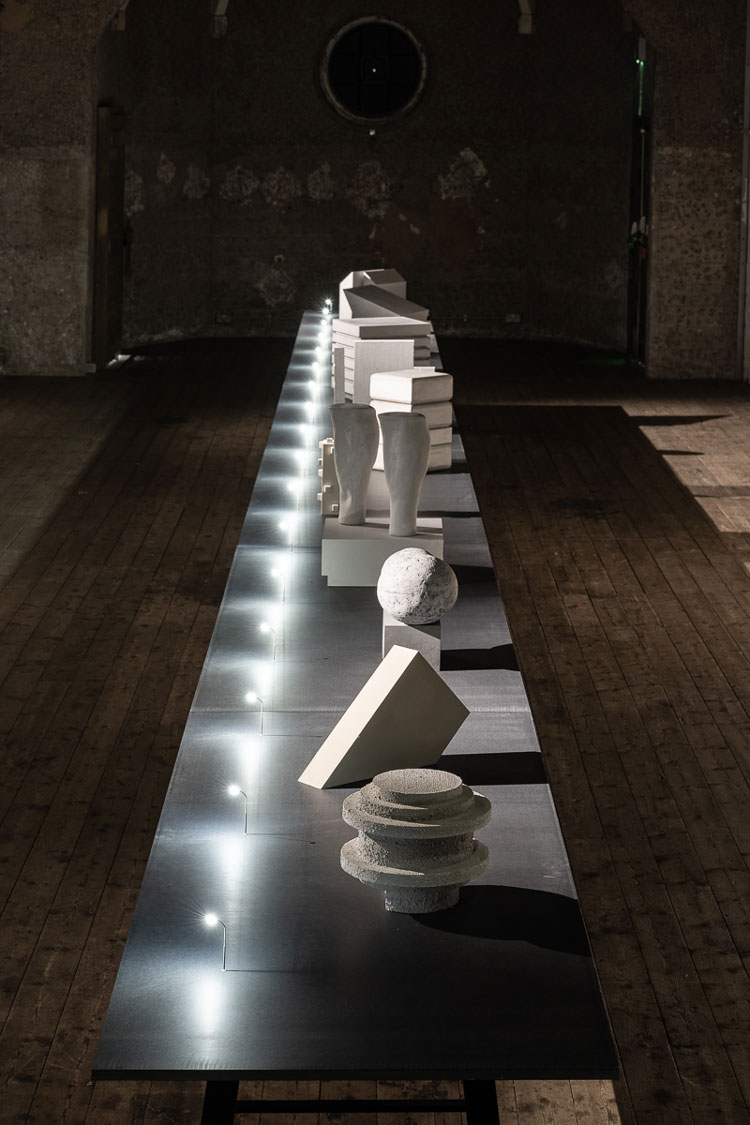 To one side of these tables is a dark room screening a pseudo-slide show of Williams’ more surreal and deliciously silly stuff, taking pot shots at other familiar targets – buy-to-let landlords, Londoners with second homes in Wales – via his colourful iPad drawings, another recent introduction. I can attest, some of these are laugh-out-loud funny – not just to me but, judging by the frequent snorts and sniggers, to others in the room. You may have to take my word for it, but there is observational genius in the visuals to these captions: “Doesn’t wash properly community artist’s shambolic lantern parade”; the manic stare of the person on a book cover titled Working with Excitable People in the Arts Long Term; the aquatic isolation of the “Wild swimmer and buy-to-let landlord forced to swim in a giant replica of his tenant’s faulty cistern”. And who wouldn’t be amused by: “Artist who thinks he has special powers is having problems with his broadband” (the glowing eyes of said artist framed by darkness)? 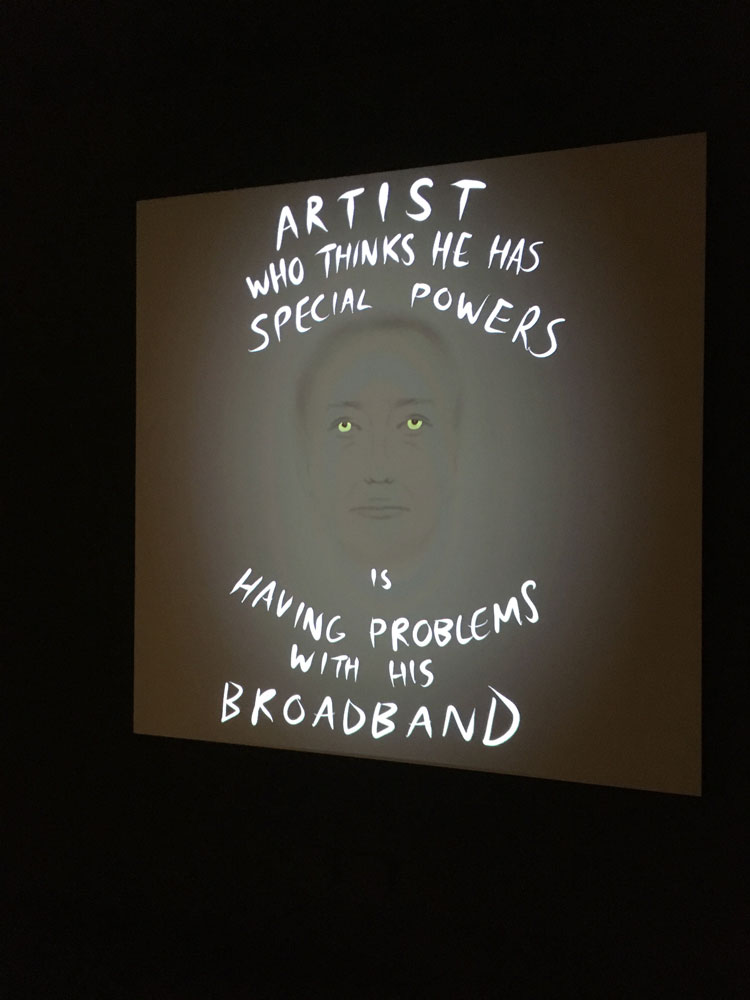 And there is footwear – of course there is; his shoe-choice mockery is something his Instagram feed became famous for way back. And the footwear does much of the characterisation in his accompanying film, screened across the park at the Dilston Gallery. Militia (2020) is a story of a contemporary art gallery  - its architecture a self-consciously geometric non-sequitur - set within a regional town’s “Culture Quarter”, under attack from a group of militant protesters (though we never find out what they are protesting about).

Williams worked with an old art college pal, Steve Kirby, to get just the right level of visual irony here: Kirby’s animation work now includes advertising for banks and other organisations that hope that a cute, friendly animation might make their un-sexy product more appealing. It is a style choice that makes this slightly menacing narrative even more surreal, as the eponymous militia enter through the gift shop and run amok in the gallery, while the staff - safely locked behind the office doors - watch it all on CCTV.

There was only so much detail that Williams was able to convey in the simplistic animation style he had chosen, so he lets the footwear do the talking – when a character speaks (voiced by Williams), they are seen from the knee down. We hear the female director (or, more accurately, her penny loafers) react in horror as the glass and china knick-knacks – including a ceramic tea set shaped like assorted genitalia - get tossed around the room. There is an administrator wearing chunky activity sandals with an ankle tattoo (a Sanskrit symbol half-visible under her leggings); a technician wearing soft, brightly coloured Kickers, and another who contrasts his boring suede lace-ups with bright pink socks. Williams – who worked as an invigilator when he was starting out on his artist path, so knows the behind-the-scenes gallery power dynamics and shoe choices well – is enjoying the thought of this film being viewed by its arty audiences: “I know there are people walking around the gallery who are in those shoes. That is such a delicious prospect for me. There is someone laughing at somebody who is quite similar to the person who is behind them.”

This show and these creations were in motion well before the pandemic, but given the appalling and still unravelling consequences, aren’t there perhaps better targets for his ire? Having said that, the overblown egos and pretensions of the “cultural elite”, and the world of white privilege they speak of, have perhaps never been riper for ridicule. Williams says: “I could have been a minor league football player who made drawings of referees. Yes, its target is very art world, but actually all these people exist in other worlds as well. I just happen to be an artist. I think grandiose curators or artists that want everyone else to follow their worthiness but are not squeaky clean themselves are suitable targets. It’s an attack on elements of human nature, not one profession in particular. Those same traits are in other professions … Humour is only one of many methods you can get things across with. It’s not like artists who work with humour are trying to be liked.” 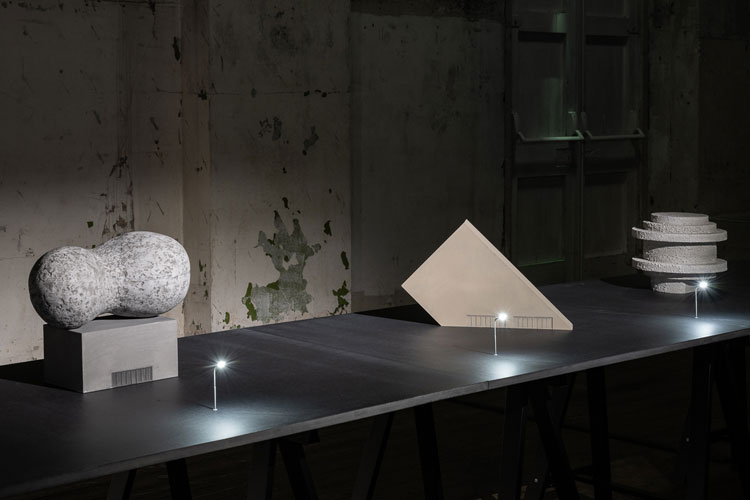 Indeed, he is not likely to win many architect fans with the presentation next door to the film: in a long, dark room under the humble timber roof of this former chapel, pale models of cultural buildings of varying degrees of ridiculousness are paraded on a long plinth, dimly lit, as if by moonlight. Williams is returning to a favourite topic: statement cultural buildings and those who commission them. But this time, there is a fun, participatory performance punchline: he has put the call out to anyone wanting to design and make models of their own ideal (or surreal) cultural building to bring their models along for a day of sharing, on 10 July, the day before the show closes. A prize-winning project will be picked, and the others displayed in Williams’ own culture quarter masterplan.

This aspect may or may not be replicated at the other venues to which the show is set to travel: all of which, Williams tells me, are, like this building, the opposite of “statement buildings”. They are the kind of arts centres that are very much rooted in their community: Tŷ  Pawb in Wrexham and Aberystwyth Arts Centre.

Having said that, before our phone call finishes, Williams tells me he is not a big fan of artists acting like social workers, and certainly does not see himself getting involved in playgrounds or public realm commissions. “If you design swings for kids as an artist, that’s great. I’m quite a negative person, nobody wants slides designed by me.” I’m not sure I agree.

• Milquetoast will travel to Tŷ  Pawb, Wrexham, (24 July to 11 September 2021) and Aberystwyth Arts Centre (dates to be confirmed).