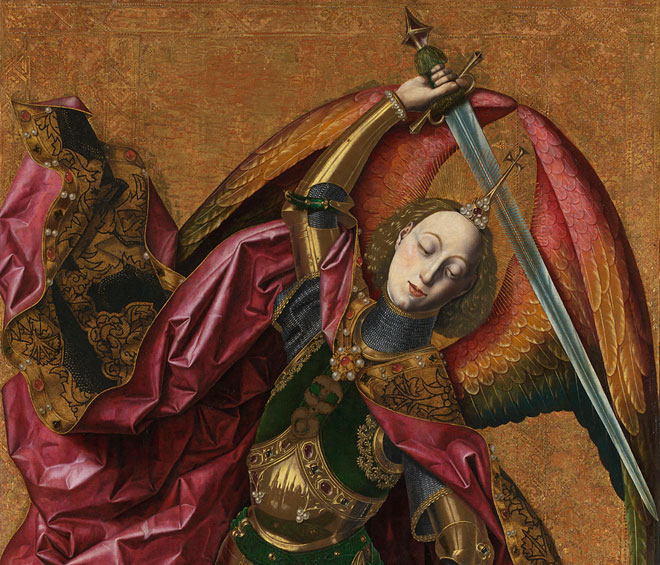 Antoni Joan, the devout knight, patron, businessman and politician, kneels on the sandy earth, the hilt of his sheathed sword balanced on the crook of his arm. He looks up from his prayer book, the picture of calm, as Saint Michael, clad in gleaming gold armour, raises his arm to finish off the writhing devil at his feet. Joan commissioned this work from the best painter that 15th-century Spain had to offer, one Bartolomé Bermejo, and it now resides in the National Gallery, London. For a limited time, Saint Michael Triumphant over the Devil with the Donor Antoni Joan (1468), has been joined by six other canvases by Bermejo, for a free exhibition examining his mastery. 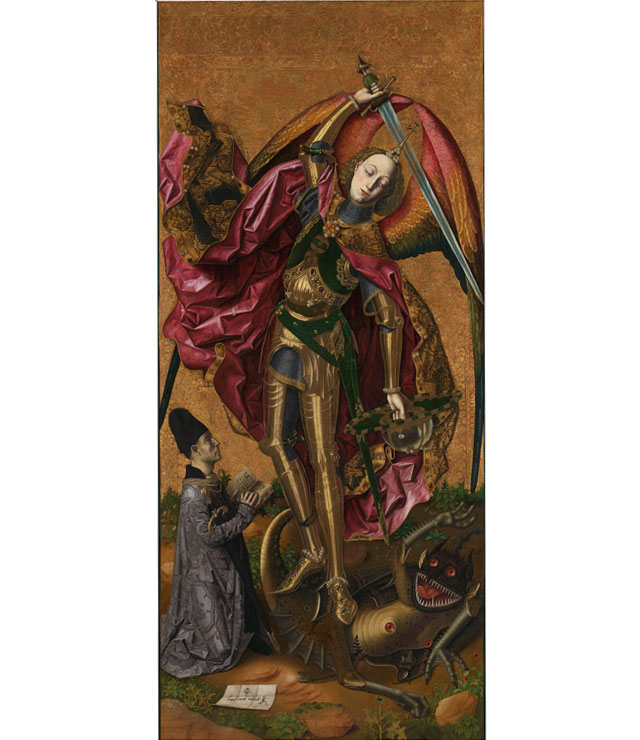 Little is known about the particulars of Bermejo’s life, but we do know that he was a peripatetic painter, moving between the various Spanish kingdoms without stopping for more than 10 years at a time. Bermejo means red or reddish in Spanish, which may suggest that the artist had auburn hair and he was likely a converto, or a convert, from the Jewish to the Catholic faith. This may be the reason for his mobile existence.

Fifteenth century Spain was not a good time to be a Jew or a Muslim. The Spanish Inquisition was only just reaching its height, its aim, to force non-Catholics to convert; those who did not were expelled from the country and new converts were heavily monitored. In fact, Berjemo’s wife was put on trial in 1486 for not following Catholic practices to the letter after her own conversion. 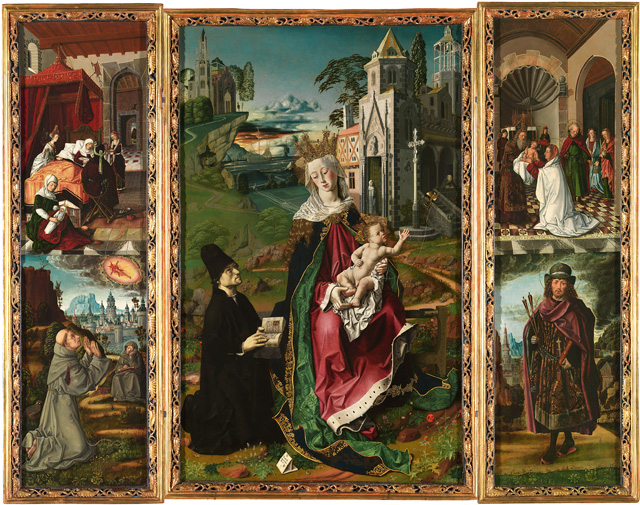 Saint Michael Triumphant is considered one of Bermejo’s most accomplished works. In this painting, the saint is bedecked in the most exquisite finery, with green velvet and crimson silk, all painted with an expert hand. His chainmail glitters and reflected in his golden breastplate is the city of Jerusalem. The saint points the rock crystal boss of his shield at the devil squirming at his feet, as he raises his sword to deliver the final coup de grace. But the devil does not look as you might expect him to. He is grotesque, it’s true – an invention Hieronymus Bosch would have been proud of – but also a figure of pity, more comi-tragic than scary.

The devil’s gaping mouth and crocodile teeth make him look as though he is almost laughing. At his elbows, his forearms sprout from the mouths of reptilian heads and his nipples form the eyes of a second face, with a mouth at his abdomen. His wings are those of a moth and his spiky tail curls around the armoured ankle of the saint. Growing by his side is a small group of poppies, the flower of death; this poor monster is about to meet his end. 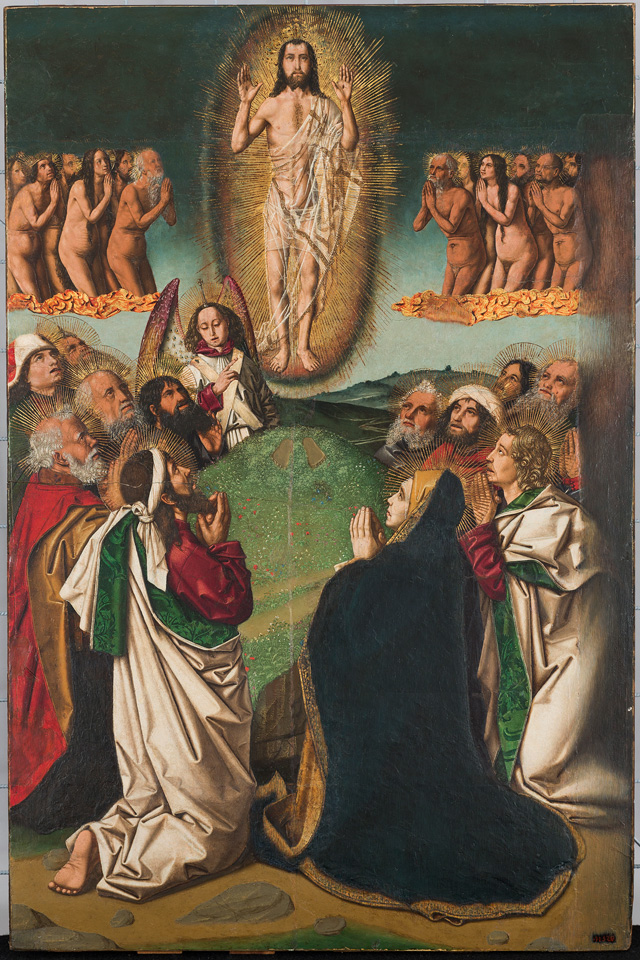 The subject of Saint Michael slaying the devil was a popular one at this time, and came to symbolise the defeat of the Muslim territories in the Iberian peninsula. This image, then, is partly a devotional one, and partly, perhaps, a celebration of the Reconquista, which reached its completion in 1492 when the last remaining Muslim territory was vanquished by Queen Isabella I and her husband Ferdinand II of Aragon, who were also responsible for starting the Spanish Inquisition. 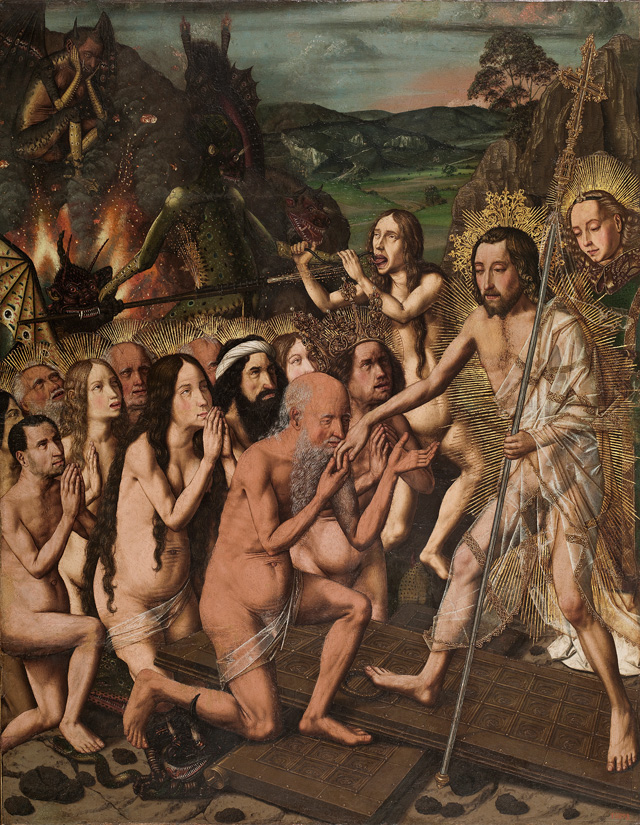 The other six paintings in this exhibition represent significant events in Christ’s life. The detail in these canvases is extraordinary and, in the catalogue, the curators point to the humour lurking at the edges. Take, for example, the Descent of Christ into Limbo (1470-5). While Jesus, draped in fine gossamer cloth and radiating splendid golden rays, addresses the pious, the monsters guarding the gates of hell in the background are a humorous hybrids of frogs, moths, eagles and snakes, with broad mouths full of teeth, and gleaming eyes. Just like the squirming devil in Saint Michael Triumphant, these creatures are figures of fun, sitting in stark contrast to the sober scene playing out before them. 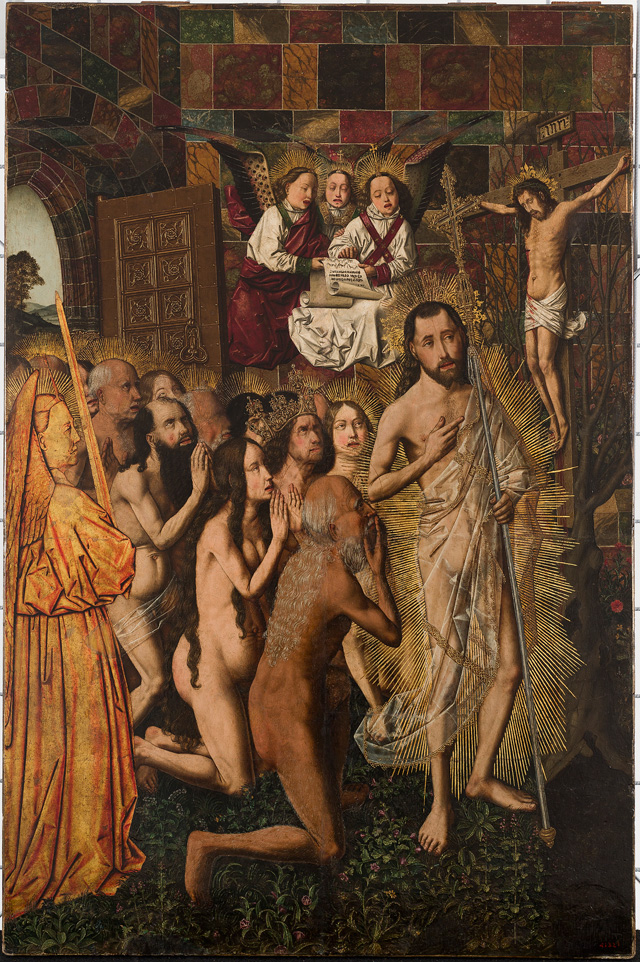 In this canvas, Jesus stands quite literally on the gates of hell, which have been pulled from the their hinges and placed on the ground in the form of a cross. The devil sits high up in the background, sulking with his head in his hands, and a dejected look on his face, annoyed that Christ will not be descending into the fiery pit that flares up at his feet. To the right, a boss-eyed lizard man with an overbite (who would not look out of place in a 1960s episode of Star Trek) strikes a rather self-conscious pose.

Perhaps contemporaries would have found these creatures frightening, but I suspect that Bermejo is having fun, perhaps at the expense of the New Testament. It is known that converted patrons requested symbols of their own faith to be included in their commissions, such as inscriptions in Hebrew and scenes that gave prominence to Old Testament patriarchs. Perhaps this was an act of defiance, a subtle rebellion from those who had been forced to renounce their faith. 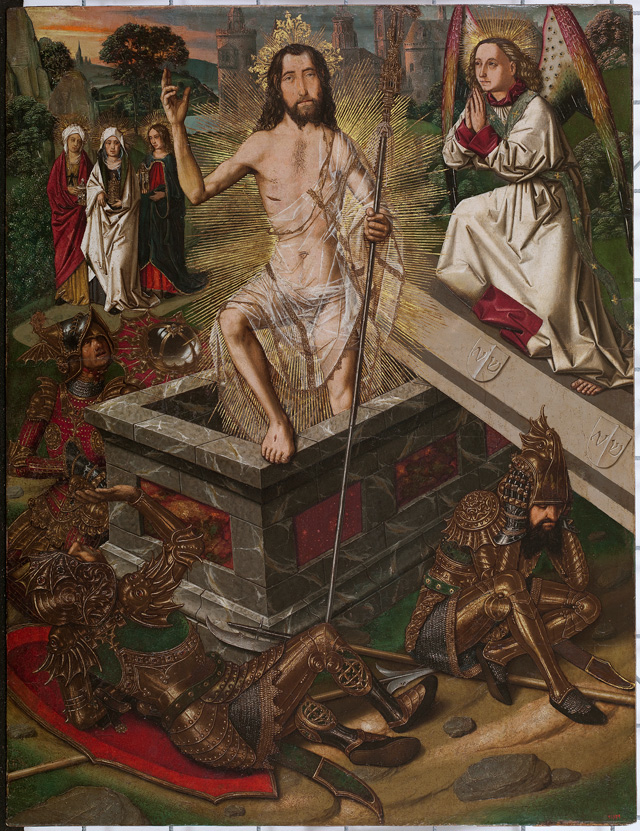 The other paintings in this exhibition are more sober in their representation of Christ’s life. Bermejo doesn’t take quite the same liberties with his Resurrection (1470-5), although the pose of the dejected devil is repeated here in the attitude of a Roman solider, covering his ears like a child, as Jesus rises from the dead making just a bit too much of a racket. The initials on Christ’s tomb are in Hebrew, and it is likely this patron was also a converto.

There may only be seven paintings in this room, but you could spend hours taking in all the details. Whether they were commissioned by Jewish converts trying to keep the Inquisition from their door, or by those looking to please a Christian god while maintaining some identity with their old faith, isn’t clear. And it is not entirely clear whether Bermejo was himself a converto. What we do know is that he belonged to a community of converted Jews and must have been trusted to strike the right balance in a turbulent world of religious unrest.