Barbara Pollack – interview: ‘You don’t have to be Ai Weiwei to be a successful Chinese artist with an international presence’

Barbara Pollack – interview: ‘You don’t have to be Ai Weiwei to be a successful Chinese artist with an international presence’

The writer and curator talks about the impact of the enormous social, economic, and political changes in China on the post-Cultural Revolution generation of artists, including the seven she features in her new show at the Asia Society 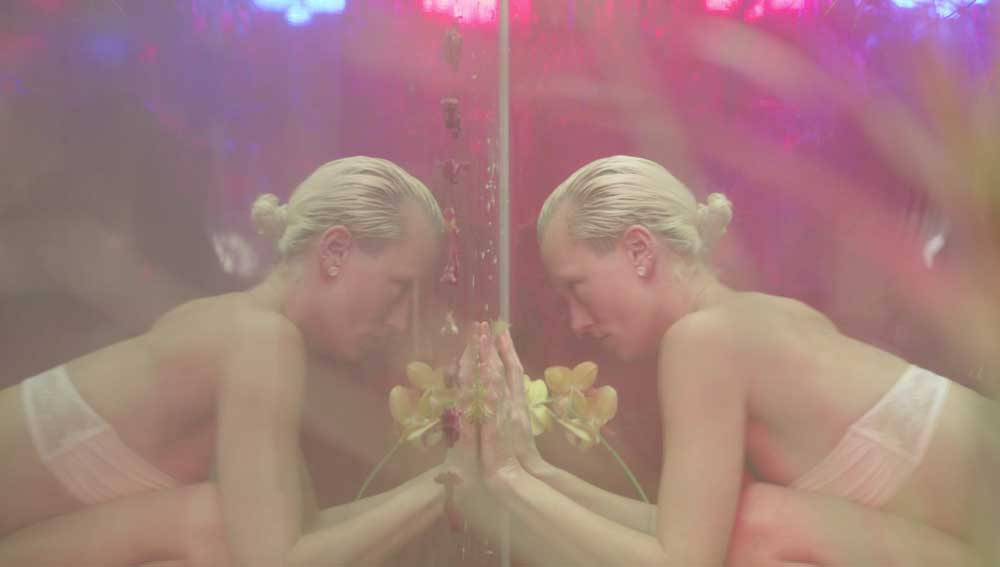 New art from mainland China, Hong Kong and Taiwan was introduced to the US by the Asia Society and PS1 (now MoMA PS1) in 1998 in a sprawling, first of its kind exhibition called Inside Out. It made history. Now Asia Society is presenting Mirror Image: A Transformation of Chinese Identity, a succinct, tightly curated exhibition of seven artists that focuses on the post-Cultural Revolution/post-Mao generation. Organised by the New York-based arts writer, journalist and curator Barbara Pollack, the exhibition investigates the impact that the enormous changes that have taken place in China since then has had on these artists and their practice. The following is an edited and condensed conversation with Pollack about the exhibition.

Lilly Wei: Could you talk a little about your recently opened show of contemporary Chinese artists at the Asia Society in New York? Perhaps we could begin with the artists in the show.

Barbara Pollack: There are seven artists in the show: Tianzhou Chen, Cui Jie, Pixy Liao, Liu Shiyuan, Miao Ying, Nabuqi and Tao Hui. Most of them live in China and were educated there, at Central Academy in Beijing or China Academy of Fine Arts in Hangzhou and elsewhere, although a number have also been to art school in London and New York. I’ve known the artists from the time they were just out of graduate school and have been following their development over the past decade. All of them are featured in my book, Brand New Art from China (2018).

LW: I appreciate the scale of the show. It gives an idea of some of the prevailing trends among younger Chinese artists today – it is specific, but not overwhelming.

BP: Yes, that was deliberate; I wanted the viewers to not feel rushed, overwhelmed, so they could focus on the work. 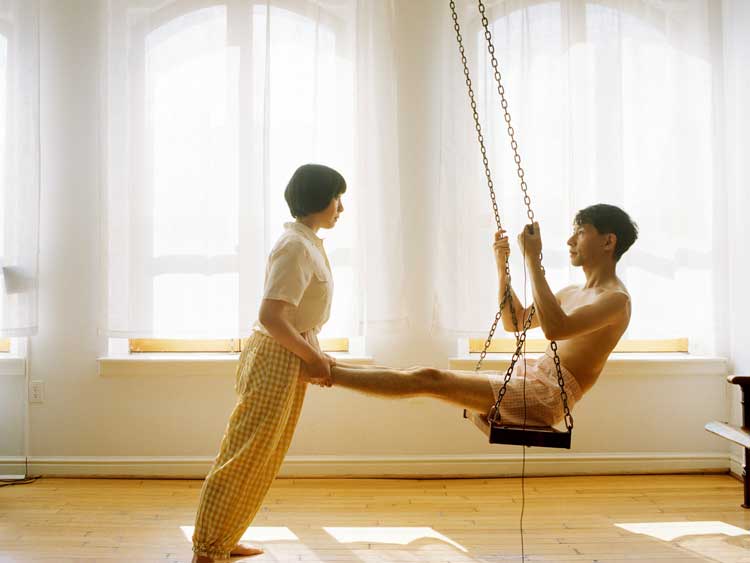 Pixy Liao. I Push You, 2021. Digital chromogenic print. Courtesy of the artist and Chambers Fine Art.

LW: Could you discuss your criteria for the selection process?

BP: I had several in mind, but one critical requirement was that the artists came of age in the 2000s, that is, born after the end of the Cultural Revolution and the death of Mao. Pixy is the oldest artist here, born in 1979. I wanted to show work that reflected the changes that took place in China under Deng Xiaoping by artists who grew up under the open-door policy espoused by Deng, a time that the curator Hou Hanru called a brief period of renaissance.

LW: And some of your other criteria?

BP: I was looking for artists with an extensive international exhibition history. Almost all the artists I chose show widely, but many haven’t been seen in New York. Cui Jie, for instance, is more of a presence in London and while there is interest in her work here, she hasn’t shown here before Mirror Image. When she graduated from the Central Academy in Beijing, she was making hyper-realistic work, but she reinvented herself to capture the changes in the Chinese landscape that led to a new kind of landscape painting. She now lives in Shanghai. 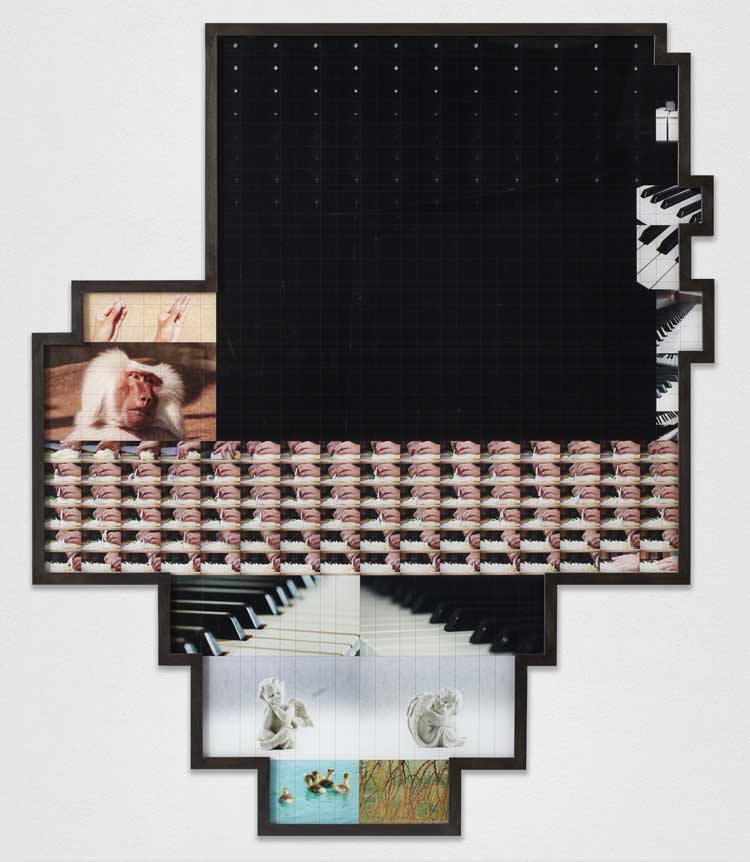 LW: And you were looking for diversity of vision among your artists, it seems.

BP: Yes, I wanted the works to be very different in media, in materiality, in their ideas about globalisation and notions of identity. Liu Shiyuan lives in Copenhagen and Beijing and sees herself as an immigrant in Denmark and the cultural misunderstandings and mistranslations of that. Tao Hui, on the other hand, lives in Beijing, so he is perfectly comfortable with tropes such as Chinese soap operas. Pixy Liao was educated in China and in the United States, as was Miao Ying who did the AI work, so their points of view are also different. These artists do not think of themselves as representing Chinese art but as individual artists, and with China’s rise as a world power, they no longer feel that they are at a disadvantage on the global stage. These artists are also not as familiar with recent Chinese history as you would think and what they know and are allowed to know is often skewed. 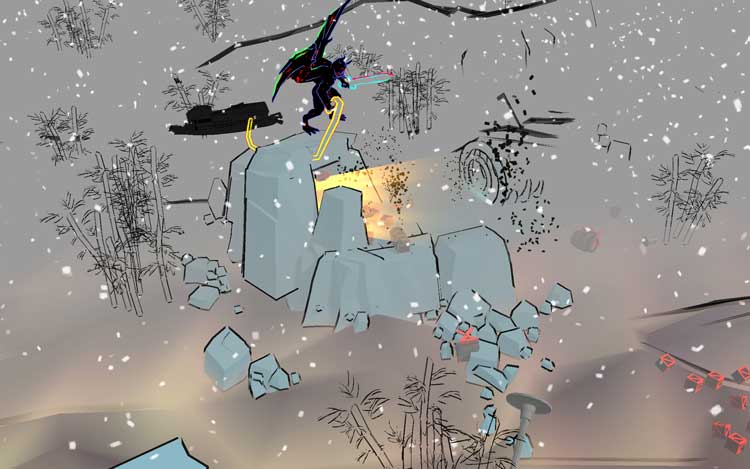 BP: The New York art world can be very provincial and, starting with the Trump administration, there has been an increase in anti-Chinese sentiment, and he and the pandemic have spurred a rise in anti-Chinese hate crimes.

LW: Would you talk a little about the difference you see between the artists in your show, who came of age in the 2000s and the present generation of artists?

BP: The artists in my show come from mixed backgrounds and viewed being educated in the west as a privilege. This most recent generation of artists, born in the 1990s and after, mostly come from wealthy families. They take much more for granted, such as being educated in the west. And they hold on to their Chinese identity and are more sophisticated than the preceding generation, although I would caution myself against making broad generalisations. I also have no idea what restrictions might be coming up.

LW: The generation of artists you are showing benefited from relative neglect; the visual arts were not as closely scrutinised as the written word and not taken as seriously. But that is changing also as Xi Jinping revs up a nationalist narrative.

BP: Yes, and with Xi Jinping’s support, traditional notions of Chinese culture and Chineseness are being revived by certain critics and curators. 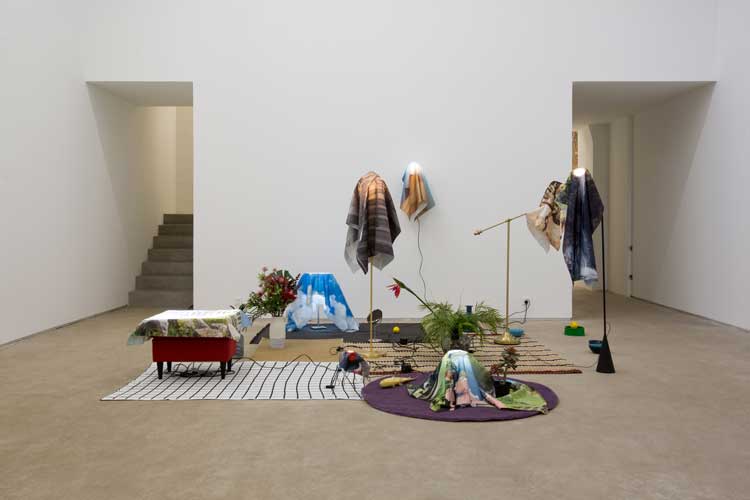 LW: You have said that the installation by Nabuqi – who was born in Inner Mongolia and now lives in Beijing – was representative of how the global economy works. Would you explain what you mean by that?

BP: How to Be “Good Life” (2019) was built in China from objects from Ikea in Beijing. We couldn’t ship it here, it turned out, so Nabuqi sent us a shopping list and we ordered what we needed from Ikea here. What we couldn’t find, we went on eBay to locate.

LW: Illustrating the supply chain disruptions that have taken place everywhere and the walkarounds that were needed.

LW: Like so many other products. How do you think the situation for Chinese artists has changed in the past several decades?

BP: For one thing, I think Chinese artists are having more solo shows and their works are considered on their own merits, not as part of group shows that are exclusively Chinese. I see that as great progress. The emergence of individual artists that we should be paying attention to is important. I see the younger generation of artists having global careers represented by galleries all over this world as a normal occurrence. You don’t have to be Ai Weiwei to be successful and have an international presence. These artists grew up with an infrastructure – museums, galleries, collectors, and auction houses – that the earlier generation of artists didn’t have. And they didn’t know what the rules were. The younger artists do know what they are. What is also important is that there exists a whole class of collectors that are their contemporaries. So, they can confidently feel that there is a place for their work to go. The audience for their work is huge in China, and has been since about 2010. And artists have become more and more ambitious because of that. They can dream that way because there is support for them.

LW: I see that there are more women in your show than men.

BP: Out of seven artists, five are women and two are men. This is one advantage of the only child policy, that girls who were only children were given more care and attention. I hadn’t planned that, it just happened. Female artists have emerged, another change from the earlier generations in which there were many women in the arts, but they didn’t have the same opportunities as men did.

LW: What were some of the other difficulties of organising such a show during a pandemic?

BP: I was heartbroken not to be able to bring the artists here except for those who were already in New York. But we were able to organise additional programming via Zoom. I did a lot of Zoom interviews with the artists, and we sourced all the work from American collectors; the artists’ galleries were very helpful.

LW: Tell me about the title of the show, Mirror Image: A Transformation of Chinese Identity.

BP: I chose the image of the mirror because there is an aspect of distortion in its reflection. When you are putting together an exhibition, it is always an interpretation, through my eyes, through the eyes of the artists, through those of the viewers. The transformation is about how a new sense of self has been developed. The questions I asked were about the changes that have occurred in China over the past two decades and the impact it has had on this generation and their artworks. How does the shifting of a country from an isolated agrarian nation to a global superpower affect its art and the psyches of its artists? What are the results of these enormous social, economic, and political changes?

LW: Do they speak of themselves as a generation?

BP: They do. They have a lot in common. The show is not a documentary, it’s an interpretation. I was thrilled that so many Chinese artists said that the conversations I published in Brand New Art got it, that the issues I discussed with the artists in it were what they have experienced.

LW: Which work would you consider the most characteristic work here, one that most exemplifies your theme? I’m sure they all do, but perhaps one might be particularly representative?

BP: Perhaps Trance, if I had to choose one. What’s shown here is a trailer made from a 12-hour endurance performance directed by Tianzhou Chen in Beijing in 2019. He’s very interested in subcultures and brought in 18 performers from around the world for the project, looking for different ways that trance-like states could be induced in performers and the audience. It makes references to Antonin Artaud, Buddhist practice, techno music and Burning Man, and is an examination of all the cultures available today and their spiritual impact from a global perspective. If you had made a Google search, this is what you would get. You can watch much longer excerpts of it on YouTube. I wanted it to be the culmination of the show, ending it with a bang.

LW: Is this still looking at current Chinese art through a western lens?

BP: That’s also changing. There is a whole new generation of Chinese curators, as well as international curators, that will be bringing us exciting exhibitions in the future. Contemporary Chinese art still isn’t known as well as it should be.

• Mirror Image: A Transformation of Chinese Identity is on view at the Asia Society until 14 August 2022.