Assemble + Schools of Tomorrow: The Place We Imagine

Assemble + Schools of Tomorrow: The Place We Imagine

In this fantastically creative play space, children have worked with the Turner-prize winning architectural practice Assemble to bring to life the ideas of the modernist architect Lina Bo Bardi 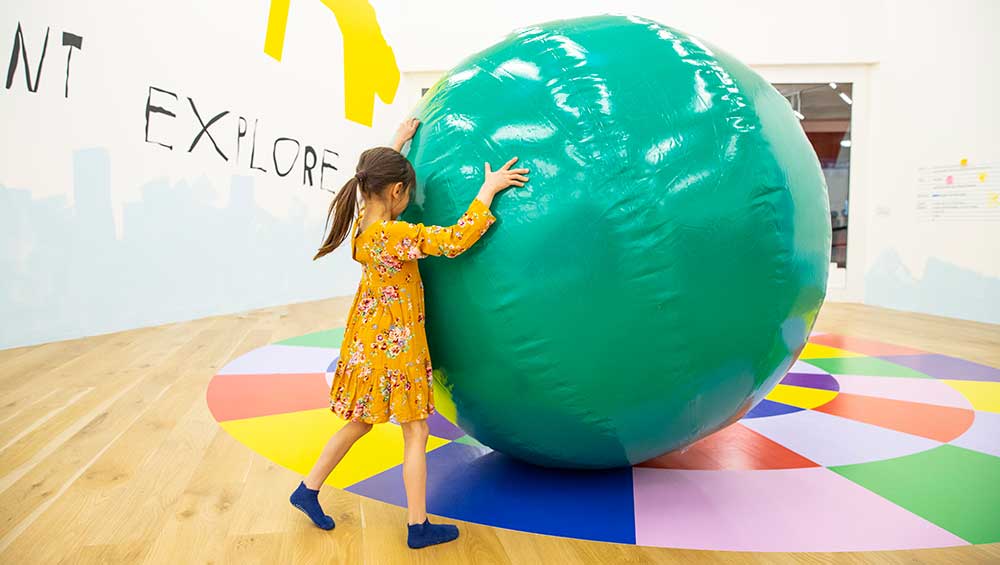 Well, at Lina Bo Bardi plus Assemble, I was hooked. When I was told that Nottingham Contemporary was planning a show inspired by these two impressively socially minded and inclusive, but rigorously imaginative artistic/architectural entities, I booked my ticket on the spot. For those who do not know about the architect Bo Bardi (born Achillina Bo, in Rome, 1914, died São Paulo, 1992), she was making waves in Brazil from the late-1950s to the early 1990s in her own radical, socially responsive way. She was a leading female architect at a time when women were not given the opportunities to design major buildings, long before Zaha Hadid finally realised her own flamboyant, parametric fantasies. Bo Bardi, unlike Hadid, was very much an architect for the people. Her ideas were for a robust, inclusive, intuitive, and yet still exciting, recognisably modern architecture. A pioneer in adaptive reuse, probably her most famous building is the SESC Pompéia, completed in 1986. A former steel-drum and refrigerator factory in São Paulo, it became a landmark project for the “working people”, a place for culture, leisure and community. 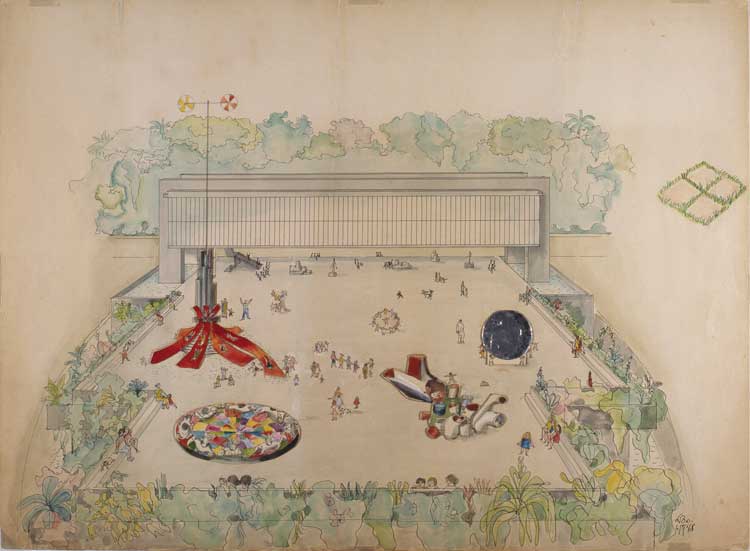 Bo Bardi was also famous for the 6,000 drawings she left, both sketches for projects she realised and those she would like to have built and some of these – especially schemes for public spaces encouraging play and exploration – have become iconic.

It was one of these drawings, shown as part of a previous Bauhaus exhibition, that sparked this exhibition. The curatorial team at Nottingham Contemporary admired the overscaled play structures Bo Bardi had drawn for an imaginary public space in front of the Museum of Art, São Paulo. Knowing that Jane Hall, one of the long-serving members of Turner prize-winning architectural practice Assemble, had done a PhD on Bo Bardi, the team were inspired to put the two entities together. 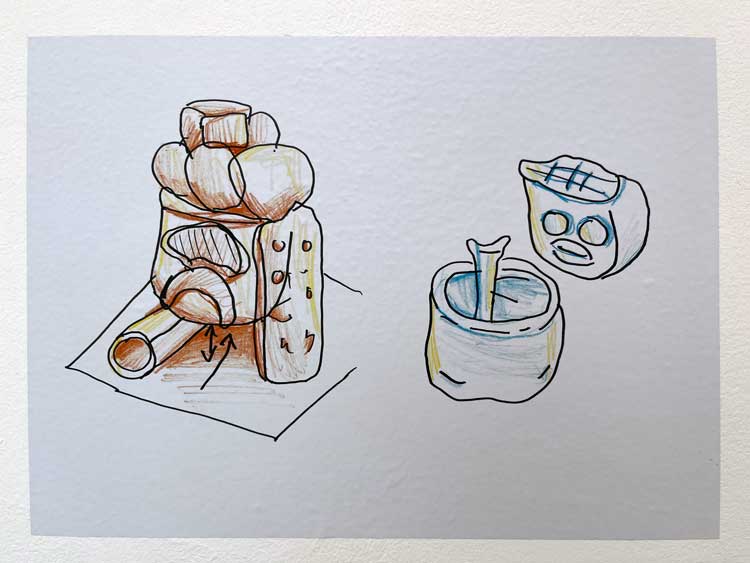 The third crucial ingredient for this show, however, is children. Curator Nicole Yip says: “The fact that the structures in the drawings are imagined from a child’s-eye perspective was very important, sparking questions around the political potential of play and children’s imaginations. So, it was important we involve children.” 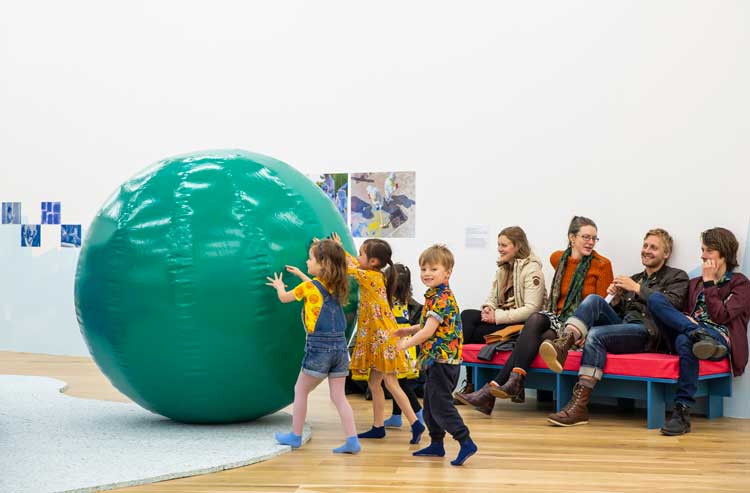 Nottingham Contemporary had already embarked on its four-year Schools of Tomorrow programme, supported by the Paul Hamlyn Foundation, placing artists in residence at seven schools and a nursery across Nottingham. The artists are embedded in, and responsive to, each school’s curriculum, while also working in collaboration with the gallery’s curatorial team. Interestingly, the children’s input has come to play a major part in the show and is visible throughout the gallery, not just in the play structures, but in films, drawings, posters and scripts. Bo Bardi is undoubtedly there in spirit. She is there in a film to the left of the entrance, with many of her quotes and drawings represented – including the original one that sparked the idea for this show.

Originally, Yip says, they had intended Bo Bardi’s works to be made somehow more visible. But as the research progressed, it became apparent that the show could best manifest her ideas as a proper co-creation between the schoolchildren, the artists and the gallery team (hence Assemble’s shared billing with Schools of Tomorrow in its title).

True to Assemble’s form, the participation was thorough and immersive; the practice may have been made famous when it won the Turner prize for its collaboration refurbishing and housing a Liverpool community in 2015, but its credentials for meaningfully involving participants had been established far earlier, for example with the Baltic Street Adventure Playground in Glasgow, fully co-designed with the area’s six- to 12-year-olds, embraced by the community and still going strong.

Yip says: “Assemble worked very closely with three of the schools - a primary school, a nursery and an academy - through 2021. They held a number of workshops with the associate artists, then with the schools themselves, and drew out some key observations from these workshops around how children play and what’s important. Different things came out of different schools. For one, it was about freedom to run between places. For another, it was about curiosity and discovery. And for another, it was about deconstruction and construction. All came into this show.” 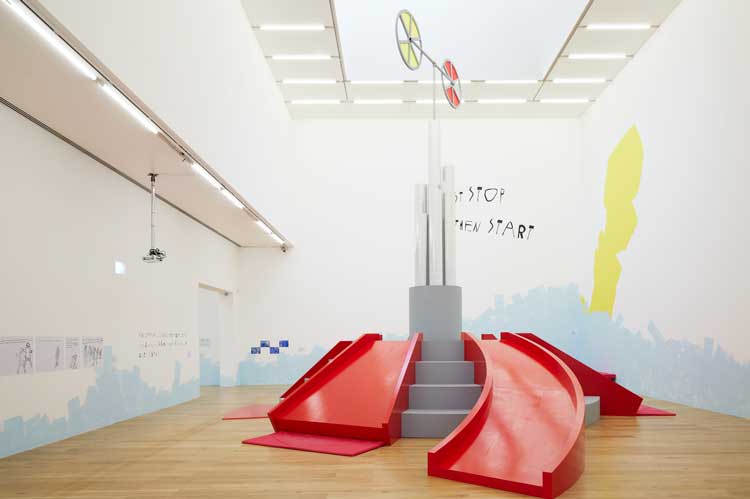 That is true in the three structures at Nottingham Contemporary, situated across two of the street-facing galleries: Big Red, a carnival-esque podium sits on its own in one gallery, with bright red slides pivoting around sets of steps and a cluster of tall tubes at its apex. It is all about hurtling around and through space. This was inspired directly by Bo Bardi’s drawing, as was the “animal roundabout”, which Assemble has rendered, complete with Bo Bardi’s squiggly illustration style, in big, soft animal shapes. These huge foam cushions can be constructed, deconstructed, straddled, stacked, used as stepping-stones, upended and bounced on – and I saw children doing all these things in the introductory hour of free access that the relevant schools were given before the official press preview. 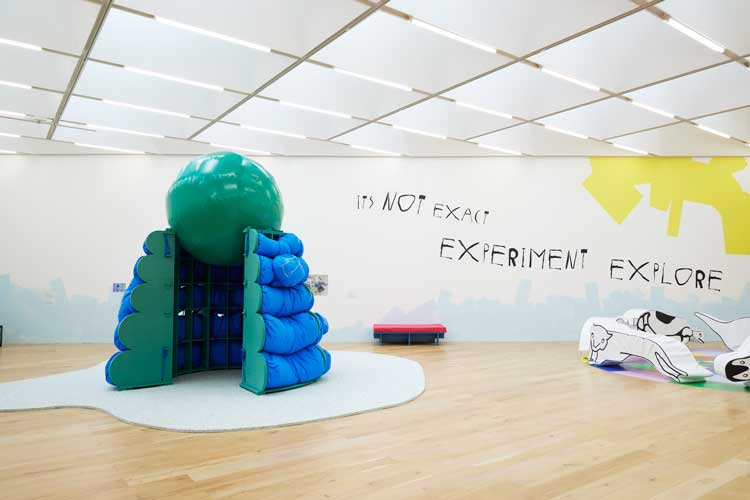 The last structure was co-created between Assemble and the children, and looks very much like a large, squishy Dalek. The frame comprises several beautifully jointed, interlocking panels, into which blue, padded fabric “sausages” have been firmly wedged to make a climbing pyramid on the outside, while the inside has a delightful, cave-like, atmosphere and shelves that also invite climbing or hiding. The cherry on the cake, as it were, is the giant green inflatable ball that sits atop its inverted form. On my visit, it was one of the first things to be toppled when the children entered the space, and a group of them rolled it around the room with whoops and shrieks of delight. Later, as I peer at the original Bo Bardi drawing, I see children running around her imagined piazza, holding a giant ball above their heads – her dreams have become manifest at Nottingham Contemporary. 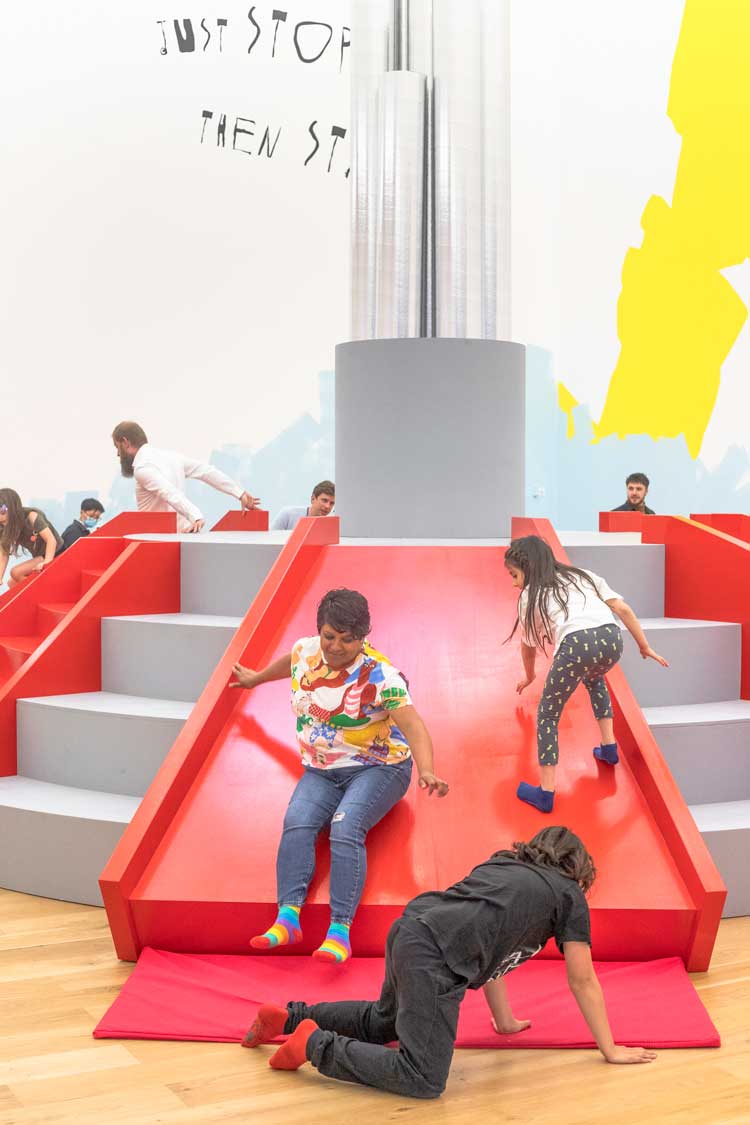 Children will be allowed to do pretty much anything they like with these structures during the show. Undirected, free-form play is what this is all about. Adults will also be encouraged to join in. In fact, a whole area of posters, which frames the second gallery window, gives clear instructions from the children on how they would like adults to play: “Concentrate.” “Let it Energise.” “Repeat, Repeat, Repeat.” These and similar instructions are also scrawled across the walls in a new font (called “Us”) developed by the schools with the graphic designer Fraser Muggeridge, as part of the workshops. 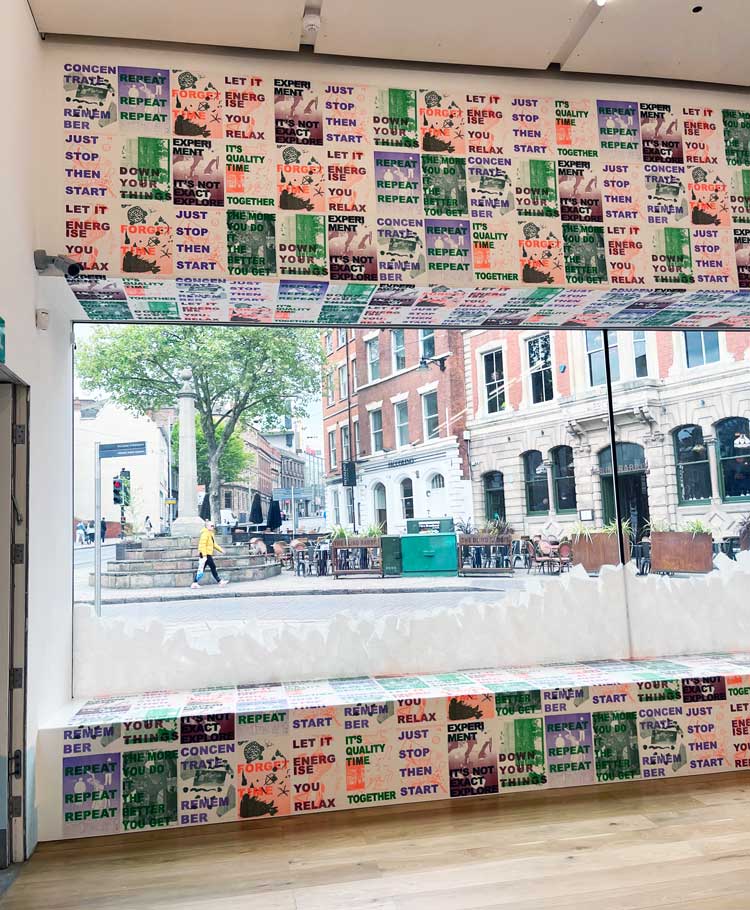 Instructional posters across the window. Assemble and Schools of Tomorrow: The Place We Imagine, installation view at Nottingham Contemporary, 2022.Photo: Veronica Simpson.

Access all areas, indeed. The way the show has been conceived and structured means the gallery will be host to many of the harder-to-reach communities. As Yip says: “This space is for everyone. A lot of the communities who we’ll reach through this project have never stepped through these doors before.” 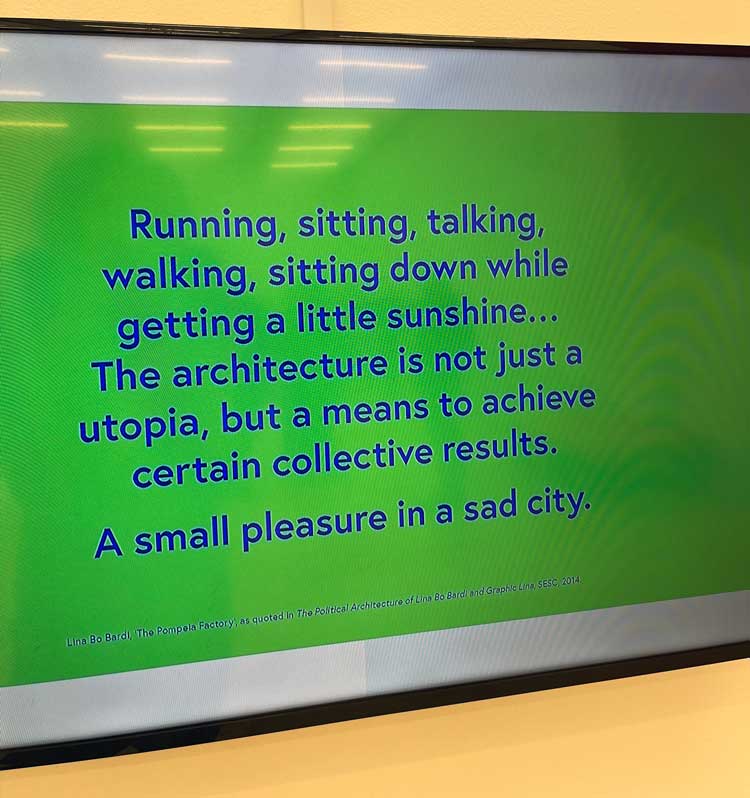 A quote from Lina Bo Bardi on the screen at the entrance to the first gallery. Assemble and Schools of Tomorrow: The Place We Imagine, installation view at Nottingham Contemporary, 2022.Photo: Veronica Simpson.

One of Bo Bardi’s quotes really resonates after the event. On screen (against a bright yellow background), she declares of her SESC Pompéia: “I would like to see people going there to attend open-air exhibitions, take part in debates, listen to music, watch films. I would like to see children play there in the morning and afternoon. And to be fair-minded about it, there should even be space for outdoor gigs and everyday bad taste.”

I’m not sure about bad taste – the colours are certainly at the vivid end of the primary spectrum, but the whole presentation is immensely joyful, from the structures themselves to the paint splashed seemingly haphazardly over the walls to the videos showing workshops and experiments, and the exuberant instructions in posters and writing. I have no doubt that the children who have participated, as well as those who simply get to play here this summer, will have learned or assimilated something essential about the multiplicity of ways in which the interaction of body and structure and space can be interpreted, constructed and reconstructed. Bo Bardi – whose essential belief was that everyone should understand the joy and value of architecture, its social and cultural potential, as well as its power to direct or enable our bodies as they move, perch, dwell and explore in space - would be most pleased. 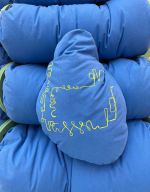