By revisiting a key exhibition of German artists from 1974, the ICA reflects on art, its relationship to capitalism, and its potential to incite reform

Can art bring about reform? Maybe even revolution? How might it be used as a politically motivated tool? These questions were at the forefront of seven key German artists’ minds in the early 1970s, and an exhibition of their work, held at the Institute of Contemporary Arts in 1974, opened them out to a wider international audience.

In its series of archival exhibitions, displayed in the Fox Reading Room, the ICA has currently mounted a grand review of the exhibition Art into Society – Society into Art: Seven German Artists, which took place from 29 October – 24 November 1974 and was organised by the then ICA curator, Norman Rosenthal, and the writer and curator Christos M Joachimides. The research and display have been jointly – and thoroughly – pulled together by Lucy Bayley and Juliette Desorgues. On show are photographs of the installation and surrounding events; vitrines with the catalogue and printed material relating to the exhibition; photocopied press coverage from the time; and select audio and video material, including extracts from a general discussion on politics in Germany that took place at the ICA on 19 November 1974.

Art into Society – Society into Art was based on the exhibition Kunst im Politischen Kampf (Art in the Political Struggle) which had taken place a year earlier (31 March – 13 May 1973) at the Kunstverein Hannover, again curated by Joachimides. Both exhibitions grew out of colloquia involving the participating artists and curators, where logistical details and overarching themes were discussed. In a video interview from January 2016, playing on a small television in the centre of the room, Rosenthal recalls how the ICA exhibition was devised. Organised in close cooperation with the Goethe Institute, the exhibition formed part of the ICA’s German month. This was the follow up to the “very successful” French month of 1973, an initiative launched by the gallery, aided by funds made available at the time of the UK’s entry into the European Economic Community (EEC). The aim was “to examine in depth significant aspects of the cultural life of the various European countries involved”. As Rosenthal recalls: “In those days, art was just America and its effects in England … Europe didn’t exist.”

The German month consisted of the visual arts exhibition, a full programme of music, theatre, film, poetry readings and an exhibition of architectural work by Hans Scharoun (1893-1972), plus an extensive lecture series, ranging over a wide variety of topics. The purpose of the month was not to represent Germany and culture – a task that was deemed “impossible” – but to show the extent to which German cultural life had been dominated, for the past seven or so years, by politically and socially aware ideologies, stemming, in part, from the work of the Frankfurt School (philosophers including TW Adorno, Ernst Bloch, Max Horkheimer and their peers). The visual arts exhibition – Art into Society – Society into Art: Seven German Artists – featured Albrecht D (D for Dürer) (1944-2013), Joseph Beuys (1921-86), KP Brehmer (1938-97), Hans Haacke (b1936), Dieter Hacker (b1942), Gustav Metzger (b1926) and Klaus Staeck (b1938), with an important contribution as well from Michael Ruetz (b1940), one of Germany’s leading photojournalists.

The colloquium that led to the exhibition is described, in a document on display in a vitrine in the reading room, as an exercise in Mitbestimmung (participation), and it was hoped it might serve as a model for group exhibition-making, avoiding both the “hazards” of the open exhibition and also the certain “capriciousness” of selectors in curated shows. “The artists can be made aware at first hand of the difficulties of the organisers [not least those of finance.] The organisers can find out more easily the artists’ individual problems, concerns and ambitions,” the document explains, concluding: “As Joachimides pointed out in Berlin, the Hanover Colloquium had a ‘therapeutic’ effect on all those taking part. After all, even in art, justice must not only be done, it must also be seen to be done.”

The seven artists involved were all politically and socially engaged. Brehmer, for example, produced a three-panel work (Realkapital-Produktion, 1974) consisting of diagrams illustrating the relationship between labour and capital, particularly in relation to multinational corporations. Haacke focused on narratives of ownership and exchange value surrounding Edouard Manet’s painting Bunch of Asparagus (1880). In the catalogue, he presented a new work on the Guggenheim Museum in New York, listing the business activities of the museum’s board of trustees. Hacker produced a series of large-scale banners, on which he handwrote an illustrated essay on art’s ideal revolutionary political role, connected to the 18th-century George Stubbs painting, Horse Attacked by a Lion (1765), and Albrecht D made a series of A4 sheets, bound together by thread, alongside a series of postcards, providing documentation of the origins and development of the situation in the Sahel region in Central Africa, spanning the period of colonisation, the introduction of a single-crop economic structure and progress towards independence.

Metzger, in contrast to his fellow artists, was ambivalent about the capacity for art to effect truly radical political change. He was concerned by the art world’s strong links with capitalism. Accordingly, he chose not to contribute any physical work to the exhibition, but instead wrote an essay for the catalogue, elaborating on the reasons for his material absence. He proposed an artists’ strike lasting three years, from 1977 to 1980, which he believed would revolutionise the art system. In the opening paragraph of his essay, Metzger wrote: “Artists engaged in political struggle act in two key areas: the use of their art for direct social change; and actions to change the structures of the art world. It needs to be understood that this activity is necessarily of a reformist, rather than revolutionary, character. Indeed, this political activity often serves to consolidate the existing order, in the west, as well as in the east.”

He continues: “The use of art for social change is bedevilled by the close integration of art and society. The state supports art, its needs are as a cosmetic cloak to its horrifying reality, and uses art to confuse, divert and entertain large numbers of people. Even when deployed against the interests of the state, art cannot cut loose from the umbilical cord of the state. Art in the service of revolution is unsatisfactory and mistrusted because of the numerous links of art with the state and capitalism.”

During the artists’ strike, he proposed that people might, instead, spend time on “the numerous historical, aesthetic and social issues facing art,” seeking to construct new means of marketing, exhibiting and publicising it. He concludes: “As the 20th century has progressed, capitalism has smothered art – the deep surgery of the years without art will give art a new chance.”

It was, however, Beuys and Staeck who were the stars of the show. Beuys, who asked for just “four blackboards, a wooden chest and some red and white chalk”, took up a near permanent presence in the exhibition, being there every day from 12 to 8pm (apart from when he had to make two short trips to Belfast). His presence was signalled by his fur coat hanging on a wall, and he spent his time in the gallery in discussion with visitors, drawing these interactions on to the blackboards. When he was absent, he said that the blackboard would stand in for him. As the boards were completed, they were spray-fixed and thrown, by Beuys, on to the floor, where visitors could walk over them, adding to them with their footprints.

Staeck, a lawyer (including to Beuys) and member of the leftwing Social Democratic Party (SDP) in West Germany, contributed a series of satirical posters, many of which were aimed at West Germany’s leading rightwing political parties, the Christian Democratic Union (CDU) and the Christian Social Union (CSU). One in particular caused something of a scandal in the German political sphere and media. It showed the rightwing politician and a founder of the CSU, Franz Josef Strauss, as a butcher with a pair of knives and the text: Entmannt alle Wüstlinge (Butcher all Libertines). Two parliamentarians visited from Germany and complained. The German tabloid Bild am Sonntag claimed that the exhibition had caused consternation in London largely because of these posters. It also implied that since the Goethe Institute was funding the show (true, but only in part), it was the German taxpayer who was subsidising it all. Rosenfeld, in his interview, remembers being told he would never receive a penny from the German government as long as he lived as it was a “disgrace”. (He also recalls, with gleeful irony, how he was later awarded the German iron cross.) This controversy was documented in a publication entitled Der Fall Staeck Fall (The Staeck Affair) (1975), a copy of which is on show – sadly unavailable to read, since it is enclosed in a vitrine.

What can be read, however, are the selection of contemporary reviews by leading critics, including one by Lynda Morris in Studio International. Although not fully convinced by the merits of the show – “The exhibition looked rather unappetising. It suffered from being cramped in what is left of the ICA’s mutilated space” – she does concede that it “certainly raised the relevant question of social and political art in London” and that “whatever qualifications one feels about the exhibition and the theme, it proved that the ICA’s reputation is not beyond repair”. Well, the latter prediction was certainly borne out, and the raising of – still – relevant questions has been achieved once more by the putting on of this archival show. Document-heavy and demanding some commitment to sit and read and listen to the audio material available, it is rewarding when one does take time to reflect on how things were then, how they are now, and what art’s role in society – and society’s role in art – might actually be. It may not be revolutionary, but it certainly has the potential to trigger reform. 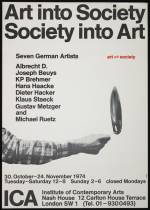 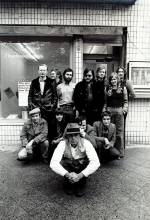 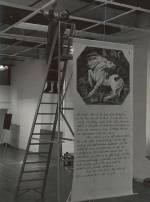 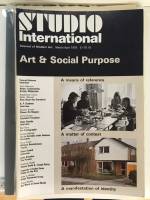 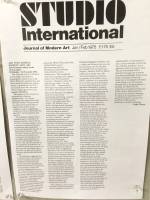