Ann Veronica Janssens — interview: ‘I try to make visible the invisible, to work with the limits’

Ann Veronica Janssens — interview: ‘I try to make visible the invisible, to work with the limits’

The Belgian artist discusses her perception-bending work, currently on display at the South London Gallery

It might not sound like much: a wafer-thin smear of PVC glitter, strewn across the floor of South London Gallery. Yet Untitled (Blue Glitter) (2015-), by the Belgian artist Ann Veronica Janssens (b1956), has an ineffable quality that far transcends its material components. It shifts as one walks around it, coruscating in hundreds of hues of cerulean. The empty space surrounding it becomes suffused with its shimmer. The glitter is so diaphanous you could imagine it dissolve into air, and yet it appears deep enough to be immersed in. 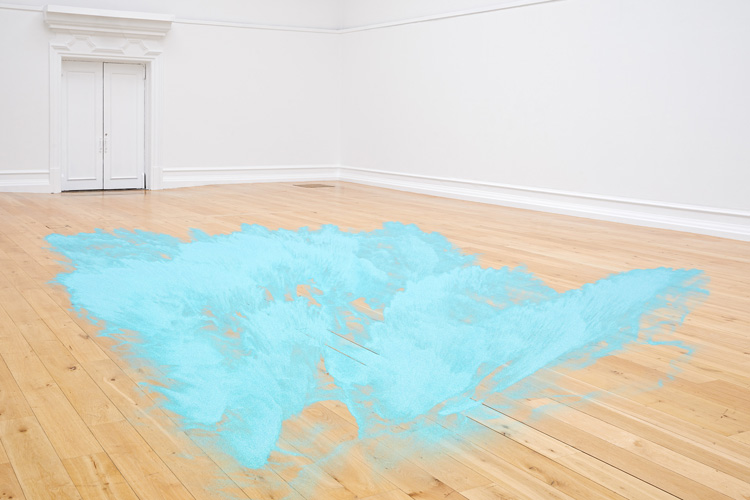 Hot Pink Turquoise collects a dozen or so of Janssens’ works, spread sparingly across the gallery’s two buildings. Each is an exploration of light and materiality, activated by our own perception. Magic Mirror (Blue) (2012), which leans against a wall near the glitter, is a rectangle of layered glass that, from afar, seems suffused with a seductive mist. Up close, it reveals itself to be shattered, an omen of misfortune. Three works in an upper floor of the Fire Station building have a similar form. Stroll past, and they become aglow with entire spectrums of lush colour,  an illusory fog that seems to gain a tangible existence outside the glass’ confines. In the past, Janssens has created environments of actual mist that were so immersive it could feel like swimming in pigment. But the works at the South London Gallery all remain in a solid state. Although they formally echo the strict geometric objects of 1960s minimalism, they exhibit a sensual, expressive relationship with colour that feels more Jackson Pollock than Donald Judd.

Janssen is based in Brussels, near the Wiels Centre for Contemporary Art. She has represented Belgium at the Venice Biennale, designed lighting for contemporary dance performance and illuminated a Romanesque chapel in Grignan, France. Hot Pink Turquoise, which earlier this year opened in a more expansive form at the Louisiana Museum of Modern Art near Copenhagen,  is her first survey exhibition in London, although her work has previously appeared at the Hayward Gallery’s Light Show (2013) and at the Wellcome Collection (2015). 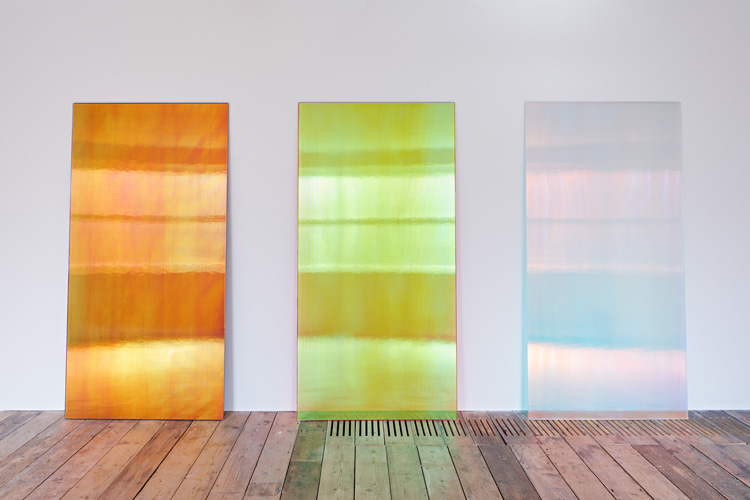 Studio International spoke with Janssens about tangibility, experimentation and the South London Gallery.

Joe Lloyd: Your work is formally varied, but something that remains throughout is an interest in light and how we perceive it.

Ann Veronica Janssens: The act of perception is really at the core of my artworks and my interests – light, but also physical phenomena. Movement has always been very important, along with the idea that it’s the audience themselves who make the work. I make some tests, and when I feel something could be interesting, I share it with an audience.

JL: It could be said this sharing with an audience activates your work. Why so?

JL: How do you seize on the idea for a new work?

AVJ: There are really two ways I work. Sometimes I go to the place where I plan to make a project, am inspired by the context, and react to it – making a site-specific project, or one with knowledge of the context, not only architectural but also the life, the people who will visit. Then there are other works, which are more experiments in the studio, which I work on in small dimensions and then present.

JL: I first encountered your work at the Wellcome Collection, where you exhibited a mist-based work, yellowbluepink (2015). How did you alight on this process?

AVJ: I always explain it as the possibility of rendering material the perception of matter and architecture. I’ve made sculptures since the 90s to give materiality to light. With the mists, the first one was at the Museum of Contemporary Art in Antwerp, and it was totally white. The museum is a postmodern building. I wanted to use this whiteness, in this difficult architecture, as a sort of maximalist research about the colour. 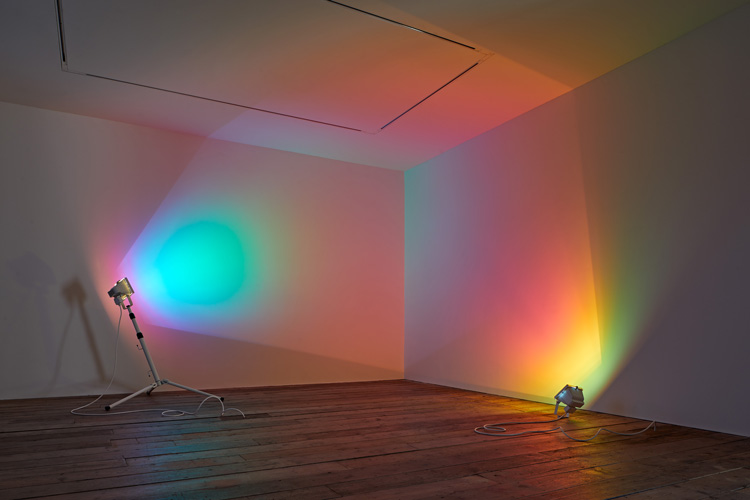 It’s also about creating the feeling, the perception, of dissolving the limits of the architecture. There are no limits any more when you’re there. You have a vision, but it’s almost more internal than external: you’re in the light. When I started working with coloured mists, I thought it was interesting because it was like a zoom into a painting, a zoom into blue or orange or a combination. And that’s what I try to experiment with.

JL: What informs your choice of bright, singular palettes?

JL: Your practice has been described as minimalist. Would you agree?

AVJ: I think it’s grounded in minimalism, constructivism, modernism and conceptualism. It’s more based on perception, movement and temporality. But, like the minimalists I try to create a reduction of the material. The beginning looks very complicated, and I try to reduce and reduce.

JL: You have used a lot of unconventional materials, such as paraffin oil and Aerogel, in your sculptures.

AVJ: I suppose because I don’t make classical sculpture, I try to make my tools and my mediums based on experimentation, because I’m curious about physical phenomena. For example, you can play with a light as a solid, as a liquid, on refraction, on reflection. With a lot of work, I try to make visible the invisible, to work with the limits. With Aerogel, because it’s 99.8% air, it imitates the way light moves through the atmosphere. For me, it’s like an ultimate sculpture.

Also, a lot of my works are very ephemeral. At the South London Gallery, I’ve made an installation with blue glitter. It’s a kind of open sculpture, because each time it’s different. You never have total control over a lot of my work, which I like it. It never ends, it’s never fixed. 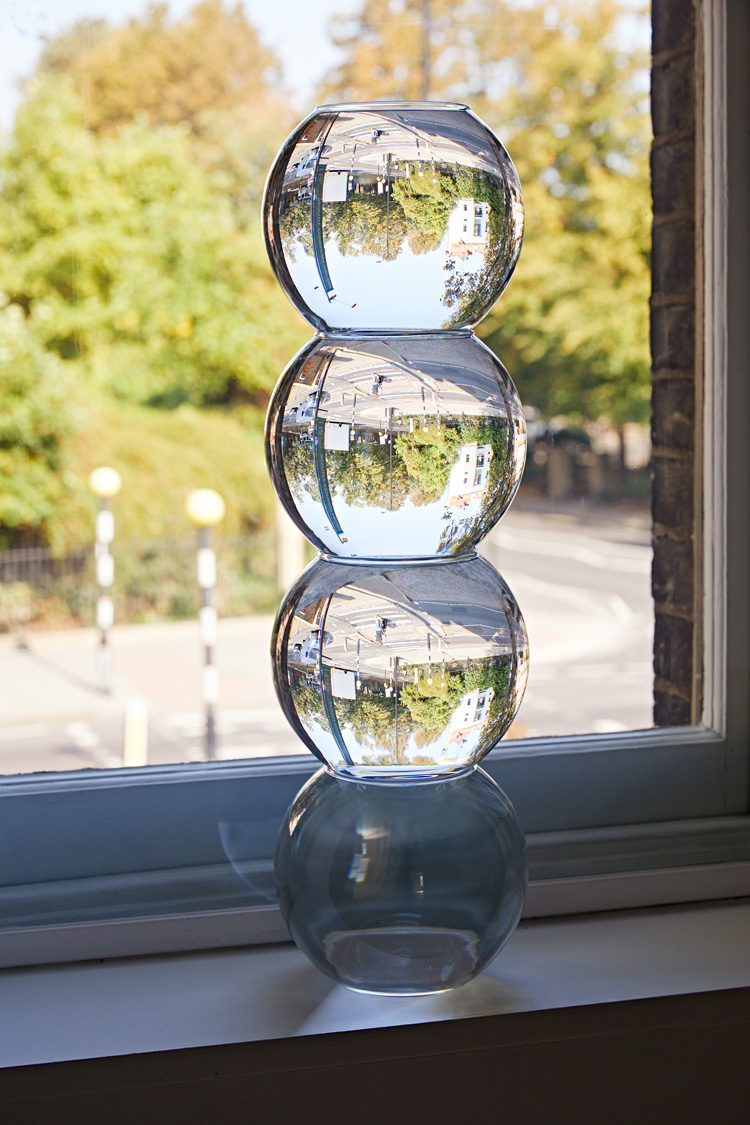 JL: In the past, you have compared your studio to a laboratory. Would you consider your practice scientific?

AVJ: It’s similar! I am absolutely not a scientist, but it’s similar because of the experimentation and research. Sometimes it works, sometimes it doesn’t work. And it has an element of curiosity, of trying to understand.

JL: Do you try to anticipate the reaction of your audiences when you create a work, and has an audience’s reaction ever surprised you?

ADV: Yes! For some people it can feel like an experiment, or a pictorial experience, or sculptural, or perceptive. Maybe for others it can be very violent, though I don’t want to make violent work. Some are made anxious. There are all sorts of stories. I’ve been sent messages from people who were married after meeting in my mist. I have no control over how people perceive them, but I don’t want to control how people perceive it. It depends on their presence, and what their brain produces in the moment.

JL: Are there particular architectural environments you find especially interesting to work with?

AVJ: Some galleries are white, and a lot are neutral, which allows you do things in very varied ways. But I also like working in the street. I like putting sculpture in public spaces, and working out how I can infiltrate the space, whether it’s a gallery or a Romanesque chapel.

JL: How did the South London Gallery’s work as a venue?

It’s hard to believe, but it’s also the first time I’ve made a virtual installation: a collaboration between with the team in London and my team in Brussels.

JL: How has the pandemic affected your working practices?

AVJ: It’s been interesting, because I was working a lot before the lockdown. It’s allowed me to have more time in the studio: to think, to prepare. I’ve not been in the rush I was before, so it has not been so bad. But the situation in general is horrible. I’m teaching in Paris, at the École des Beaux-Arts, and I’ve spent quite a lot of time with my students because it was very hard for them. No confining barriers, small rooms. They’ve produced a lot of interesting work.

JL: Finally, what lies ahead?

AVJ: In mid-November, I’m going to have a show at the Alfonso Artiaco Gallery in Napoli. And then I have something at the Panthéon in Paris, and I’m preparing a big show at the Pirelli HangarBicocca in Milan, which will open in two years. It’s a huge space. It’s so huge that it’s good to have the time to think and continue to experiment.

• Ann Veronica Janssens: Hot Pink Turquoise is at the South London Gallery until 29 November 2020. In line with government guidance, the gallery is temporarily closed. 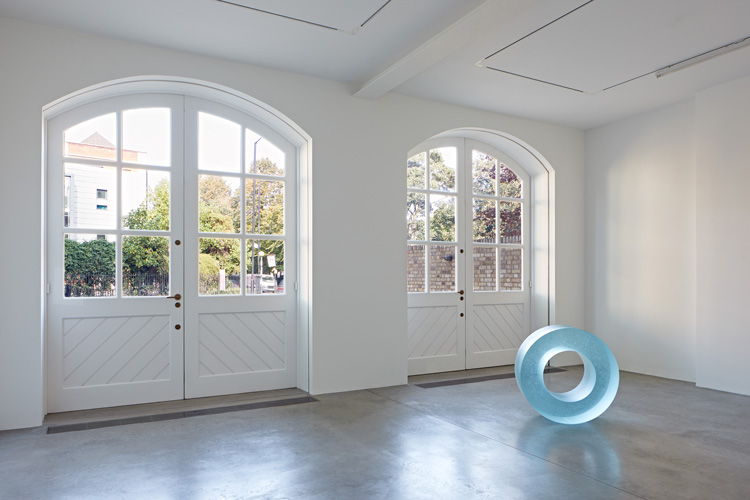 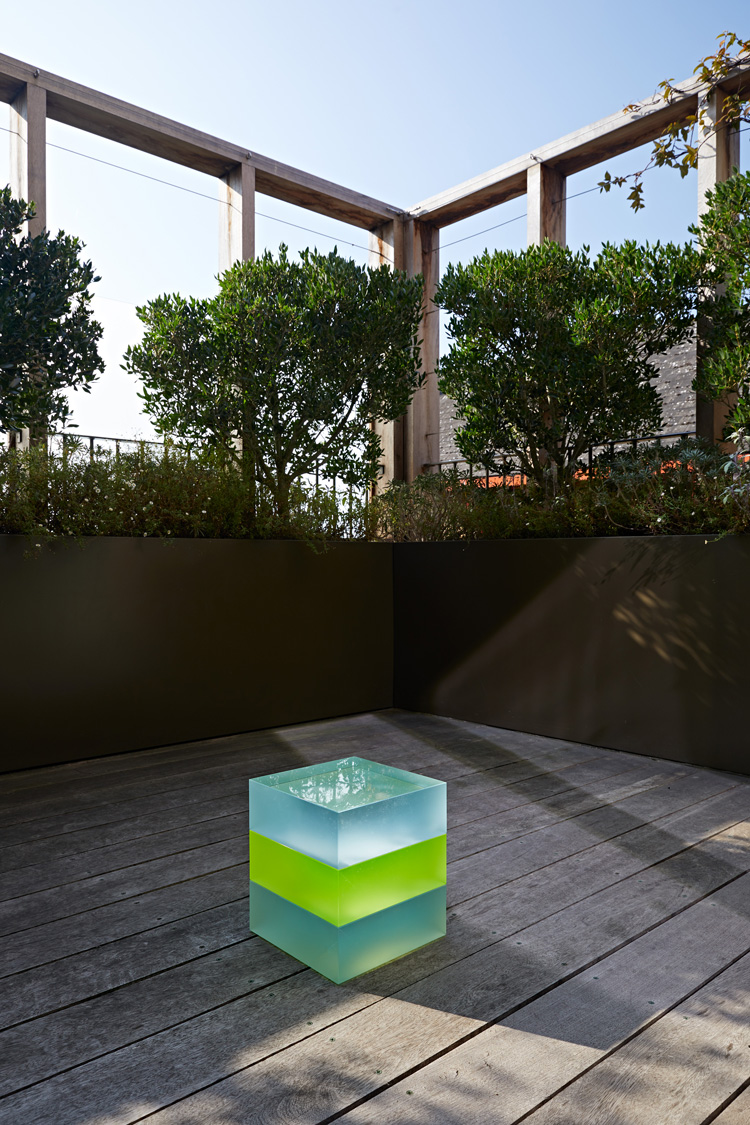