There is a great deal of death in this exhibition but, ultimately, it is an overwhelming lust for life that permeates every room

Tate Modern, London
12 March – 6 September 2020
(Due to the coronavirus, all Tate’s four galleries are temporarily closed until further notice)

This exhibition takes the personal story of Andy Warhol (1928-87) as its starting point. That story threads through an exhibition that considers Warhol’s subject matter, his investigations of different materials and his crafting of a distinctive public persona. It asks how this personal story helped to shape his view of the world and the artworks he made. 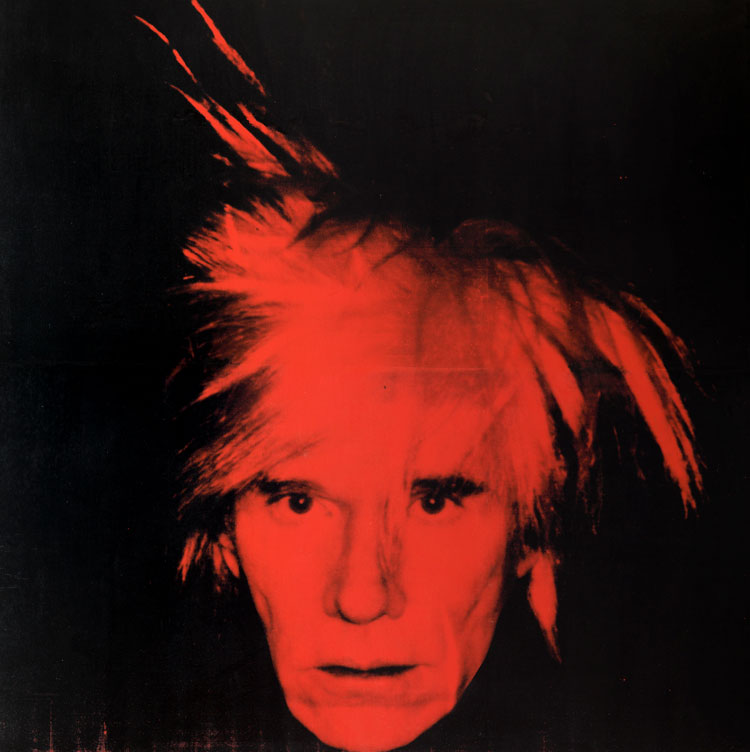 Warhol was born Andrew Warhola in Pittsburgh, Pennsylvania, the son of immigrant parents from what is now Slovakia. He was raised in the Catholic religion, took art lessons at his local museum and drew with his mother, Julia. From a young age, he was entranced by religious imagery and Hollywood movies. When Warhol’s father died in 1942, he left money for him to go to college where he studied pictorial design. Warhol moved to New York in 1949, aged 21, to work as a commercial illustrator. It was at this time that he began to fashion his persona. He dropped the “a” from his surname, underwent plastic surgery on his nose, and began wearing a distinctive silver/grey wig to hide his receding hairline. His mother soon joined him in New York and helped with his illustrations, living with him until just before her death in 1972. 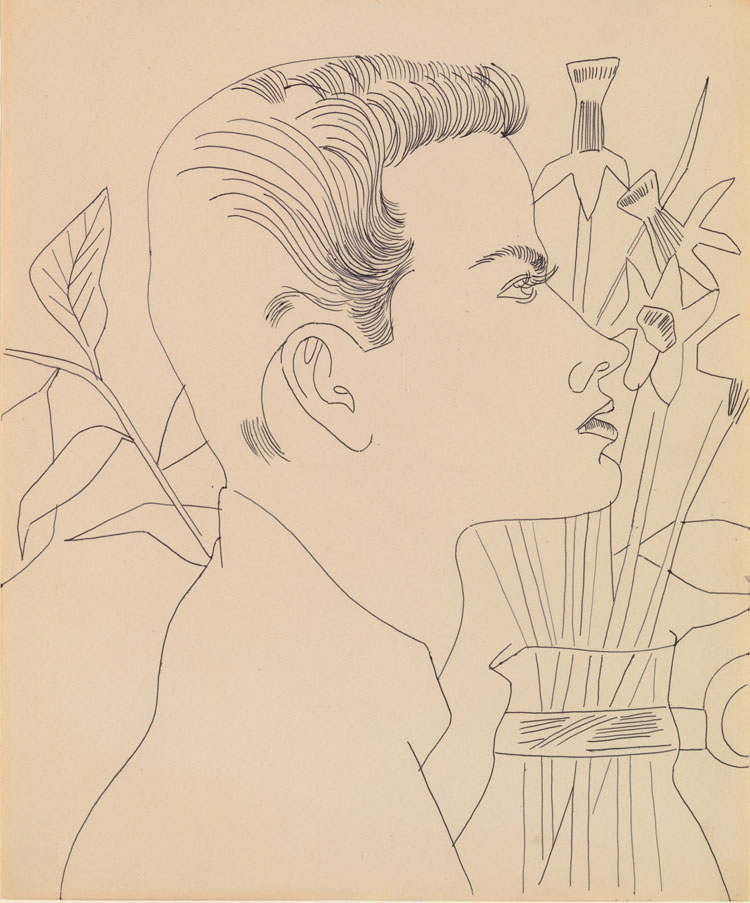 As a gay man, Warhol embraced the queer community of dancers, poets, artists and designers that New York offered. His exhibitions in the 1950s featured line drawings of young men at a time when the machismo of abstract expressionism dominated the US art world. It would be another 10 years before Warhol would be successful as an artist.

Warhol’s first serious art film was Sleep (1963) and it is one of the first works in this exhibition. The closeups of Warhol’s one-time lover, the poet John Giorno, sleeping in the nude are transfixing. By editing out any excessive movement and projecting the 16mm film in slow motion, Warhol turned Giorno’s naked body into a field of light and shade, much like an abstract painting. 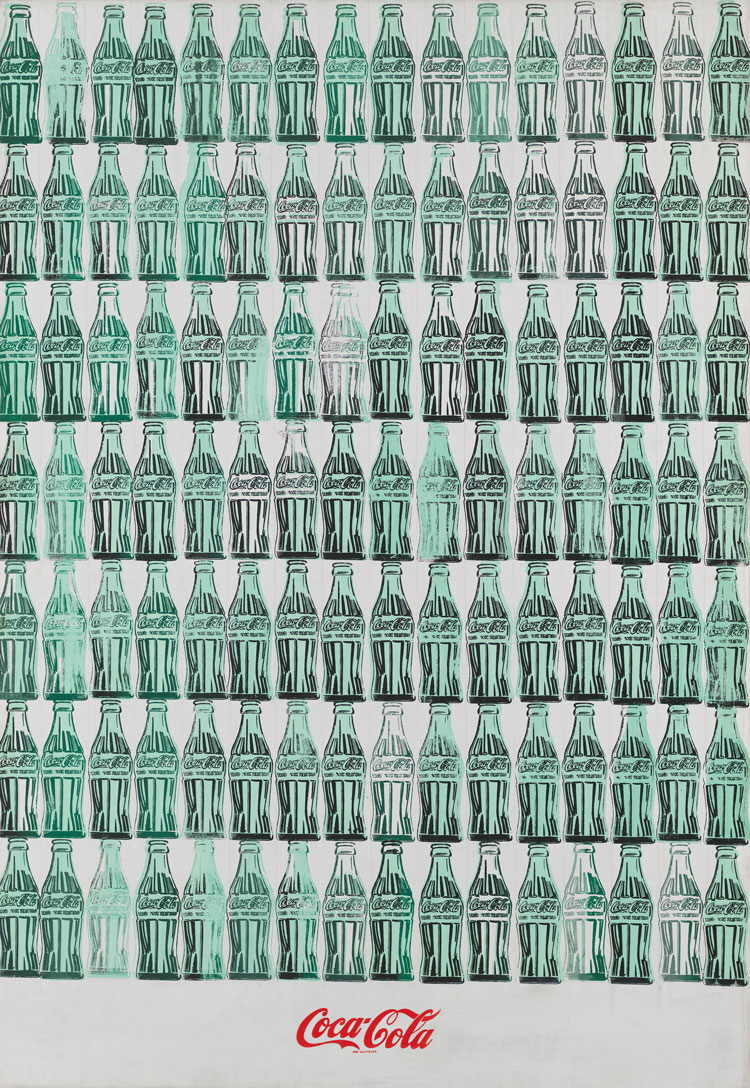 In 1960, Warhol began to make hand-painted images using advertising imagery and expressive painting. He quickly moved to the cleaner graphic style we now know as pop art. He wanted to speed up the replication of images and, in 1962, adopted commercial screenprinting techniques. Among these images are his Death and Disaster paintings, images of film star Marilyn Munroe and his famous Campbell’s soup cans. 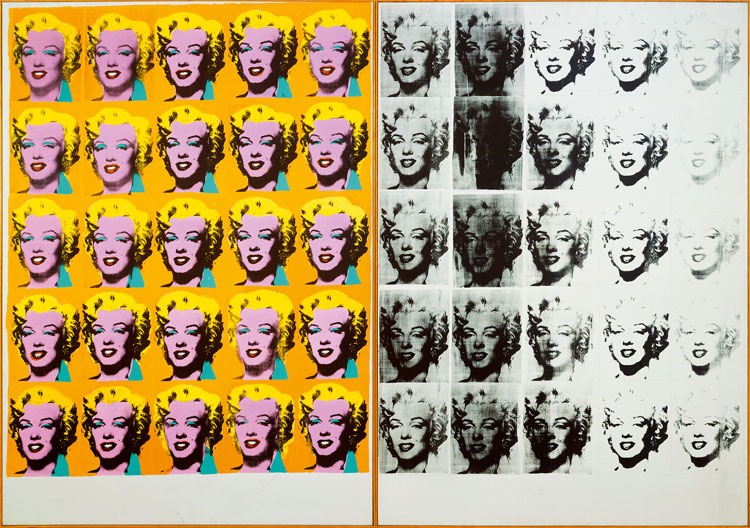 There are three joyous and explosive parts of this exhibition that come one after the other, heightening the impact and experience for visitors. The first concerns the Factory, Warhol’s experimental art studio and social space with its walls covered in silver paint and foil. From 1964-6, Warhol documented the people passing through the Factory in his Screen Tests. In collaboration with others, he made more than 500 films between 1963 and 1967. The Factory scene with its many personalities became a kind of living artwork in its own right by the mid-60s. 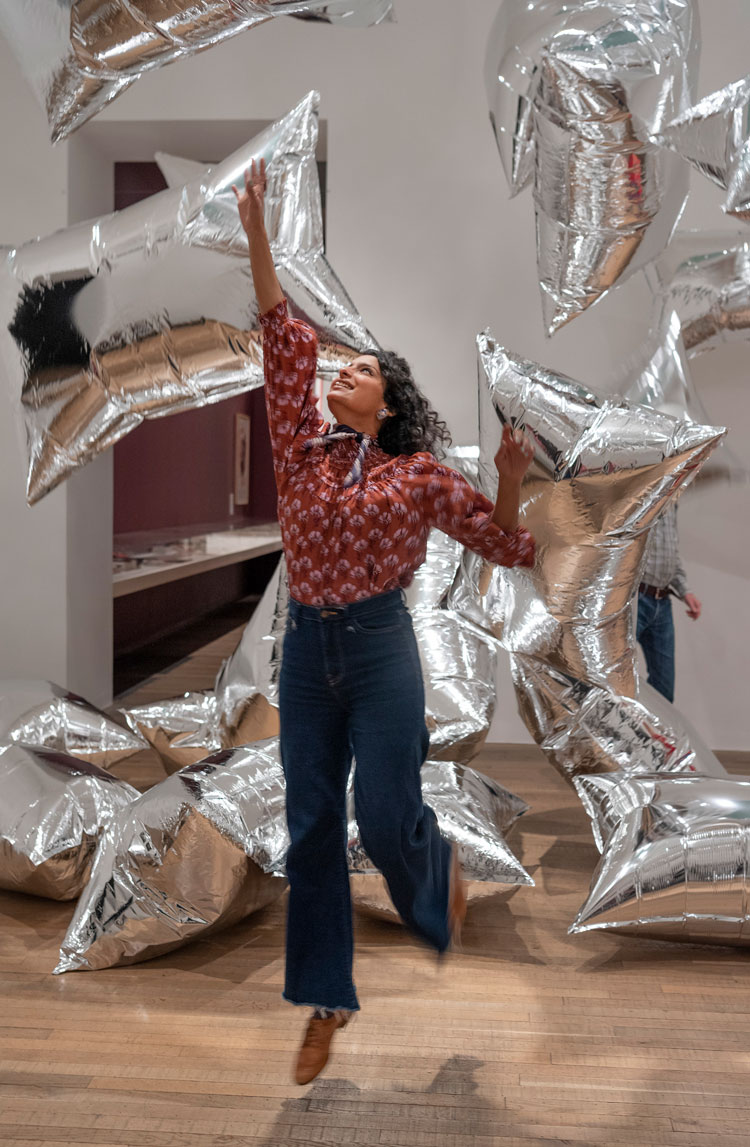 The second joy in this exhibition is Silver Clouds, a space replete with metallic silver balloons filled with helium that invite viewer interaction. Warhol called them “paintings that float”.

The third joy is Exploding Plastic Inevitable, or EPI.  This room was designed by The Andy Warhol Museum to give an impression of the EPI multiscreen, multimedia shows featuring film, performance and music. 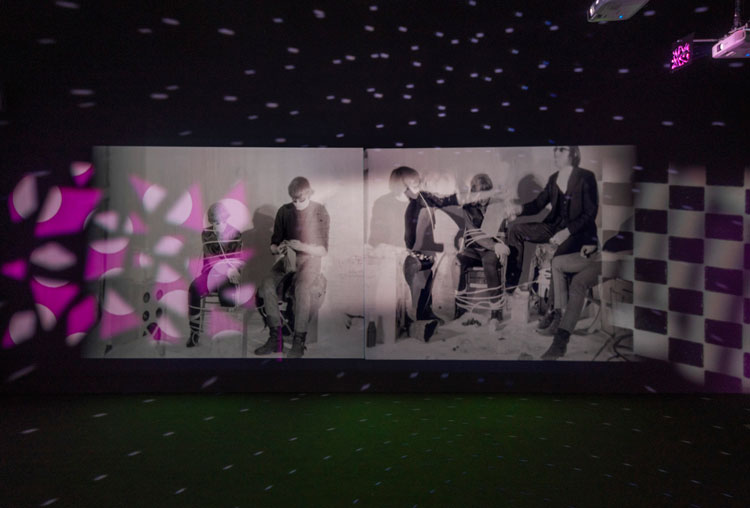 There was music from Velvet Underground and Nico, and strobe lights and coloured gels overlaid projections. There was dancing with whips from Factory superstars Gerard Malanga and Mary Woronov. Exploding Plastic Inevitable is sexy, stirring and truly mesmerising. 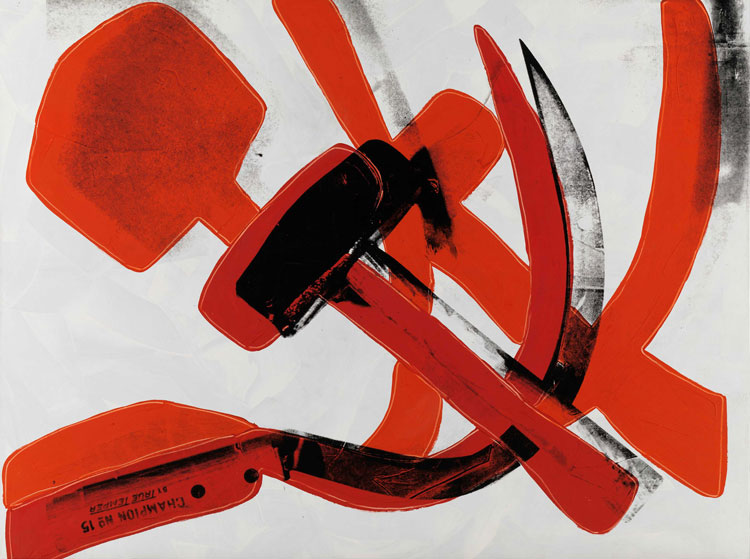 When the writer Valerie Solanas shot Warhol in an attempted murder in 1968, his physical and mental health were affected for the rest of his life. In the 70s, Warhol returned to printing with a number of large-scale screenprints like the Mao series of 1972 and the Hammer and Sickle and Skull series of 1976. In 1975, he produced another new series titled Ladies and Gentlemen and featuring anonymous Black and Latinx drag queens and trans women. From more than 500 photographs of 14 models, a selection were enlarged on to silkscreens. 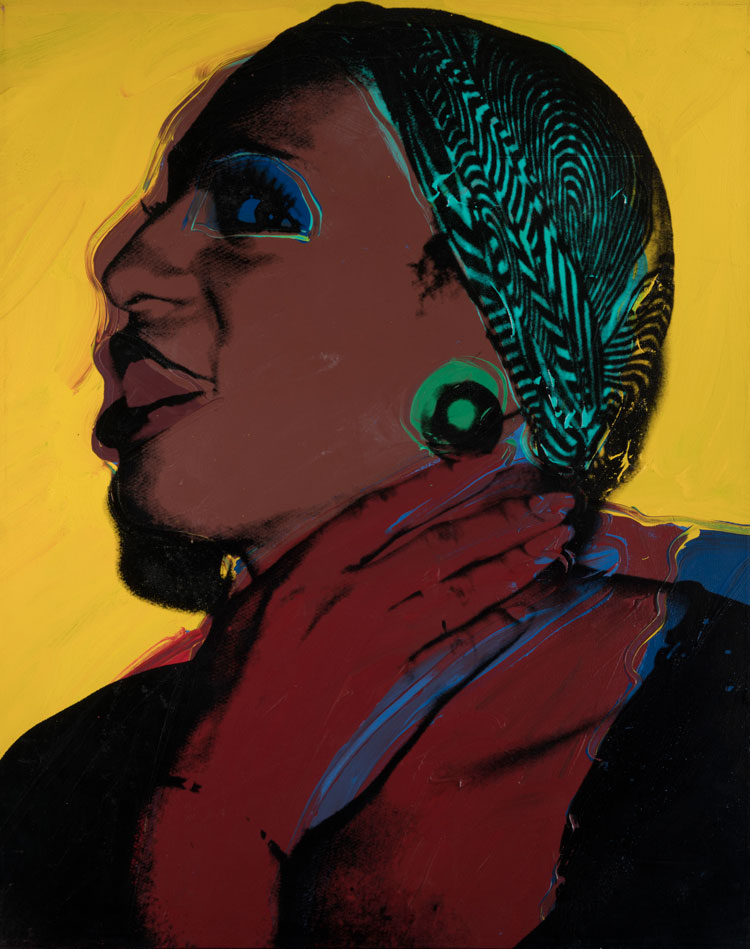 Warhol was an international celebrity by the 70s. Often photographed with well-known figures such as Grace Jones and Debbie Harry, Warhol went out every night. His social networks earned him portrait commissions that helped to fund his more experimental work. In 1978, his Oxidation series used human urine to oxidise metallic paint, creating pools of colour to parody abstract expressionism.
In 1980, Warhol extended his practice into television premiering Andy Warhol’s TV on a cable channel. Then he showed Andy Warhol’s Fifteen Minutes on MTV in 1986.

Warhol’s Sixty Last Suppers (1986) is, fittingly, the last work in this exhibition. A copy of Leonardo da Vinci’s The Last Supper (1495-8), depicting Jesus the night before his crucifixion with the 12 disciples, had hung in the Warhola family kitchen. Warhol deliberately used a cheap reproduction based on a 19th-century copy, a copy of a copy of the original. The repetition of the image and the sheer scale of the work mean its impact is significant. Tate’s interpretive material suggests it is a “portrait of endless loss”, and it is.  It was made after the death of Warhol’s former partner Jon Gould from an Aids-related illness. It is also reminiscent of the wall graves found in some cemeteries. Sitting in front of it in the gallery certainly felt like an act of commemoration.

There is a great deal of death in this exhibition but, ultimately, it is an overwhelming lust for life that permeates every room. I was fortunate to visit just days before Tate Modern closed its doors due to the Covid-19 threat. As I write this review, I cannot help but wonder how it looks now. Still, emptied of visitors and awaiting their return in order to breathe new life into the artworks, the gallery spaces and each other. 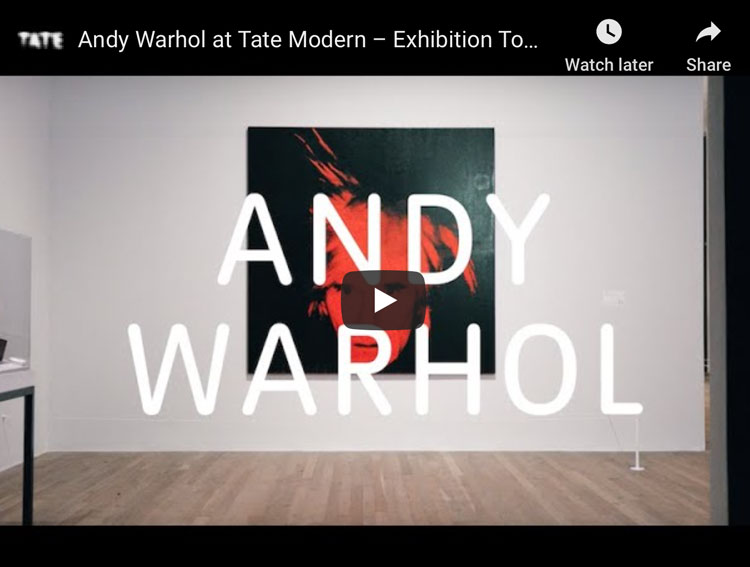 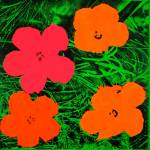 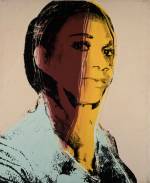 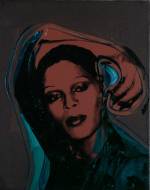