Andy Warhol and Eduardo Paolozzi: I want to be a machine

Andy Warhol and Eduardo Paolozzi: I want to be a machine

In the 1960s, Warhol and Paolozzi believed art would benefit from increasing mechanisation. This show looks at where their differing techniques took them 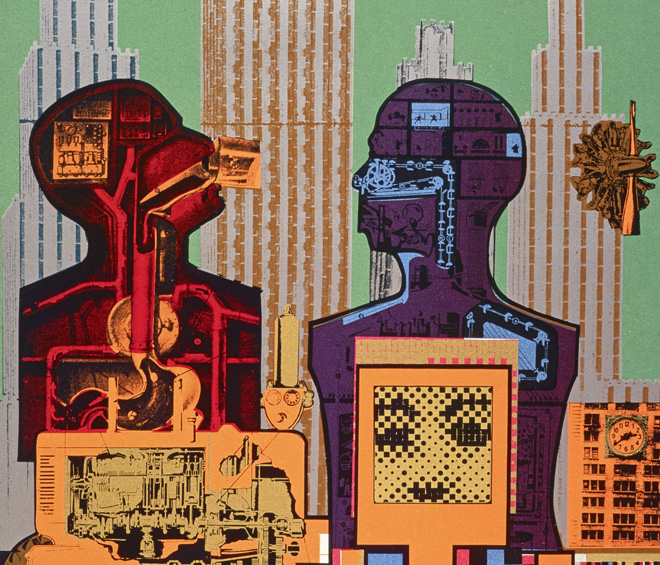 Eduardo Paolozzi. Wittgenstein in New York (from As is When), 1964 (detail). Collection: National Galleries of Scotland, purchased 2001. © Trustees of the Paolozzi Foundation, Licensed by DACS 2018.

The desire to be a machine, or at least to relate to them profoundly, was shared by Andy Warhol and Eduardo Paolozzi in the 1960s, as the world around them became increasingly industrial and mechanised, and the place of people – and their emotional lives – became implicitly challenged and discussed.

Taking its inspiration from these shared concerns, and particularly from Warhol’s famous declaration, in 1963, that “I want to be a machine”, the current exhibition at the Scottish National Gallery of Modern Art explores the contrasting ways in which these two prominent and innovative artists positioned themselves in relation to machines and the ideas surrounding them. Both using the technique of screenprinting to mechanise their own artistic practices, and becoming known as proponents of the pop art movement, the Edinburgh-dwelling Paolozzi (1924-2005) and the New York-based Warhol (1928-87) nevertheless explored their similar subject matters in very different ways, with contrasting conclusions.

Inspired by the Bauhaus movement, Warhol’s embrace of screenprinting was part of a serious belief that art should – and would, inevitably – become mechanised, in a society that was increasingly industrialised and dependent on machines. Even before he embraced screenprinting, as the exhibition shows through a series of rare early drawings, Warhol was intrigued by the idea of repetition and reproduction; he would trace images or outline projections on the wall to create eerie “copies” of advertisements and photographs. Using ink on paper, furthermore, he would create rudimentary, faint prints of his own drawings, what he termed “the blotted line technique”, which resulted in ghostly images of young men and fashion models.

When he began using screenprinting to create his more famous images of Marilyn Monroe, Jackie Kennedy and numerous other iconic faces (including, in time, his own), this sense of hauntedness became, if anything, more pronounced. Although Warhol said he wanted to become a machine and mechanise art, the humanity, and perhaps a certain element of existential crisis, slips into view.

Warhol’s persona was machine-like – robotic, without life or character, at times, in a way that led contemporary commentators to view him as clownish, naive and even idiotic – but this construction had a genuine theoretical underpinning. Warhol not only believed in industrialisation; there was also a sense that he desired the emotionlessness that machines represented. His work, in a way, was an escape into a world devoid of emotion and all that it could bring. Being a machine was a way to escape being human.

However, in these works, from the early drawings through to the famous creations of his peak decades, and the numerous Polaroids and films that he made throughout, some kind of emotional life is revealed regardless, and indeed even becomes its most prominent characteristic. The photographs and prints seem to insist on repetition and resuscitation of life, but also underline that it has gone – that for every copy, something of the original has been worn down and denigrated. In the ghostlike, faint lines of reproductions, death haunts, but life – and emotion – also linger, almost menacingly.

The desire to be a machine, it seems, was an impossible one, even for Warhol. Machines, to a man who loved and embraced the mechanical age, came to symbolise some sort of death, some aesthetic nihilism, that, strangely, the symbols of mechanised art seem to protest against, implicitly. Warhol once stated that he wanted to make works that showed no trace of having been produced by hand; while he did manage this, his art nevertheless belies its very human creator, concerned with desire and death and his own fate.

Taking a rather different approach to the question of men and machines, Paolozzi’s work is concerned with a far more visceral relationship between them. In his magnificent sculptures, particularly, his work reveals and enjoys the similarities between the body and the parts of mechanical things – the intricate, vein-like tubes of engines, the physical architecture of systems. There is a clear influence of the austere, mechanical wartime in which Paolozzi grew up – its planes and engines, especially – juxtaposed with pop images of housewives, domestic scenes and trashy novels. This gloriously unreal vision of capitalist, consumerist postwar society, as presented in Paolozzi’s collages, exists in stark contrast with the visceral, down-to-earth, intricate creations in bronze and steel. Here, machinery is more closely connected to physical, human life; Paolozzi counters the unreal world of advertisement and fantasy with the dexterity and materiality of the mechanical, industrial world.

For Paolozzi, screenprinting, interestingly, became a way to combine these two worlds; his prints, so intricate and complex, and yet also informed by his earlier collages, present a fusion of visual invention and imagination, and an industrialised, mechanised perspective. For him, humans and machines could work harmoniously, since machinery was, after all, an invention of human minds.

Decades since Paolozzi and Warhol’s most innovative work was created, screenprinting is now thought by some to be an almost archaic technique, rather than a means of creating iconoclastic commentaries on the relationship between humans and their innovations. It represents the days when we still used our hands, arms and bodies, to create works of art, rather than computers. It has come to symbolise physical, human effort, rather than mechanisms invented by the mind.

Both artists’ insights remain relevant and fascinating, however. Paolozzi’s belief that machines would always reflect the human minds that created them remains as useful today as ever. And Warhol’s perhaps inadvertent observation that even when machines can take over our physical processes, the emotional, existential world of human minds continue regardless, is certainly prescient. We cannot escape ourselves, however mechanised we become; the intricacy and complexity of human life haunts and embodies everything we create. 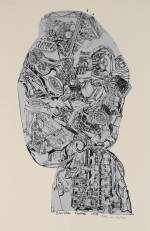