This exhibition of more than 300 works explores the formal similarities and conceptual differences between Warhol and Ai – from their approaches to studio practice, their interest in their native societies, their experiments with celebrity, and their popular appeal

Andy Warhol and Ai Weiwei clash and compliment each other in this exhibition of comparisons and contrasts between style, concept and form. Using the language of pop art, one of the most relevant comparisons is how both artists have made work to reach a wide and popular audience, creating symbolic visual languages through the use of everyday objects.

Shown next to each other, surprising things happen. Ai’s work seems to bring out a darker side to Warhol’s colourful screenprints; instead of a vacuous reflection of society, Warhol’s work becomes a critique on culture, celebrity and consumerism in America. Similarly, Warhol’s obsession with surface brings out the playfulness of Ai’s work, which the latter always manages to maintain, even while addressing serious political issues. Max Delany, senior curator at the National Gallery of Victoria, takes us on an intriguing ride with the artists, across physical and conceptual territories where they have met and collided.

The exhibition is also an extensive survey of both artists work, with more than 200 works by Warhol and 120 works by Ai, including major new commissions. These include: an installation of one of Ai’s Forever Bicycles series, made up of 1,500 bikes; a five-metre-tall piece from his Chandelier series; Blossom (2015), an installation of thousands of delicate white porcelain flowers; and, of course, Letgo Room (2015), the installation built of Lego-style bricks showing portraits of Australian human rights activists.

Letgo thrust the exhibition into the headlines before it even opened through Ai’s very public dealings with the Lego toy company. In December 2015, Lego refused to process Ai’s bulk order on the grounds that it would not supply bricks if it thought they would be used to make a political statement. However, after Ai posted a Duchampian photo of a toilet filled with Lego bricks on Instagram, captioned with the words from his refusal letter, he was inundated with offers of Lego bricks from all over the world. Time constraints, however, meant Ai ended up building the work with Chinese copies of the brick, which in itself added a new dimension to the work. (Then in January, Lego changed its rules for bulk orders, adding yet another strand to the story).

Ai’s personality and bold public actions mean that he is never long out of the headlines, and Warhol, too, placed himself in the spotlight by associating with famous people and inviting celebrities into his studio. The exhibition explores how the artists have engaged with the subject of celebrity, developed followings, and used modes of mass communication to reach people. For Warhol, it was photography and film; for Ai, the internet and social media. The exhibition describes Warhol as a “precursor” to social media, using his famous quote: “In the future everyone will be world-famous for 15 minutes”, and his Screen Tests 1964-66 – filmed portraits of well-known individuals from Lou Reed to Yoko Ono – which reflect our contemporary obsession with reality TV.

Here, we seem to meet a difference between the two artists. Looking at multiple screenprints of Marilyn Monroe and Elvis Presley, we can see that Warhol was insatiably fascinated by personality cults, news headlines, and the social and economic phenomena of celebrity. Ai, on the other hand, sees a different power in celebrity – the power to do good and make a change in this world. Celebrity has also been a cloak of protection for Ai; the world was watching when he vanished for 81 days, detained by the Chinese authorities – petitions and protests sprung up internationally in an attempt to locate him. Interestingly, his celebrity has emerged from the hardship and suffering he has faced, perhaps more than from his art.

Direct comparisons in the exhibition include both artists’ portraits of Mao Zedong. It was in the early 1970s, with the popular circulation of Mao’s Little Red Book in the US, that Warhol became aware of the power of his personality cult. He created his image of Mao in 1972, the year President Nixon travelled to China, directly from this book, using it as he would any other celebrity, tracing and screenprinting the image in variations of colour. The exhibition shows a series of Mao screenprints, hung on top of wallpaper patterned with repeats of a purple-faced Mao.

Ai, too, worked with the image of Mao, although having a very different opinion and experience of the dictator. Consequently, Ai’s image of Mao presents the viewer with different layers, painting him, in a cartoonish style in oil on canvas, into the “individualistic” society that he detested: Ai sees his cult not as one of celebrity, but one of terror.

Both artists are very recognisable and have become well-known faces; Warhol’s spiky hair in his screen-printed self-portrait, or Ai’s latest selfie on Instagram easily come to mind. The exhibition creates an interesting dialogue between the two artists through their self-portraits. In 1987, the year of Warhol’s death, Ai visited the Museum of Modern Art where he posed in front of a 1966 self-portrait of Warhol, identifying himself directly with the artist. We also see a photograph of Warhol in Tiananmen Square in 1982, a symbolic location that has been central to much of Ai’s work. Later on, we see Ai’s middle finger stuck up towards the square, and Lu Qing, his wife, flashes her underwear in the square.

Some of the comparisons make it seem as if Ai has spent his whole career working to reflect that of Warhol’s. In 1985, Warhol was commissioned to paint a portrait of the Absolut Vodka bottle for an ad campaign, and in 1994 Ai placed a statue of a Tang Dynasty courtesan in an empty Absolut Vodka bottle. Yet these bottles represent different things: for Warhol, a commercial enterprise; for Ai, a political readymade.

Duchamp was an influence on both artists; Warhol made a screen-test portrait of him and Ai bent a wire coat hanger into the shape of his profile. Using the idea of the readymade, both artists mirrored their environments through objects, layered on them social and political commentary and critique, then, most importantly, used them to communicate with a wide audience.

Warhol’s commentary on consumerism through his Brillo Boxes and Campbell’s Soup Cans was perceptive and astute. While seeming obvious, it was, at the same time, taunting and humorous, reflecting society back on itself. Ai treats objects in a more personal way, using surveillance cameras made of marble, and bicycles to comment on the restrictions to his freedom imposed by Chinese authorities. Ai has even compared himself to a readymade, with how he merges his life and art; in some ways, he is the object of interest, removed from the everyday and into the gallery space.

Both artists played the role of initiator and conductor of their social and political experiments, specifically through their roles at the helms of their studios, The Factory and 258 Fake, both of which structures played to the Duchampian theory of ideas over artisanal skills.

Ai’s Blossom (2015), commissioned for this exhibition, was created by ceramicists at Jingdezhen, a traditional place of porcelain manufacture in China, demonstrating how Ai works with teams of artisans to realise his ideas. The work is a carpet of white flowers, their petals delicately curling upwards across a large surface area in the centre of the room. Flowers have been a recurring theme in Ai’s work as well as Warhol’s. In the same room as the white porcelain carpet are Warhol’s large flower screenprints. Warhol had started drawing flowers while working as a successful commercial illustrator in the 50s, learning how to fill space on the page, developing a simple yet characteristic style, and understanding what attracted people to images. On the other side of the room, Ai’s early drawings show his interest in politics and quest for personal expression. He grew up in Xinjiang province, a remote area to which his father, the poet Ai Qing, was sent for manual labour and re-education. The exhibition shows works created by Ai in the late-70s, when he was involved in burgeoning democracy movements and the Stars group (an avant-garde group of self-taught artists operating in Beijing between 1979 and 1983), including elegant figurative drawings in a romantic western style. Later, in the 80s, he moved to New York, yet still looked to the social issues there, creating Safe Sex (1986), a raincoat with a condom built in, a work that combined two readymades to consider the Aids crisis.

Ai’s latest work, Letgo, demonstrates the same activism that has always been clear in his work. The piece shows portraits of, and quotes from, Australian activists, including Julian Assange, Rosie Batty, Dianne Otto, Rosalie Kunoth-Monks, Norrie May-Welby and Gary Foley. Looking at this big yellow box, situated inside a room of colourful, pastel-coloured screenprints, it is remarkable how Ai manages to maintain this element of “play” within his work while addressing serious topics such as human rights.

The relationship between individual and state power was relevant subject matter for both artists and, sitting alongside Ai’s work, we have the opportunity to look at Warhol’s work from a socio-political angle that is not often emphasised. Warhol’s Electric Chair (1964), part of his Death and Disaster series – with images of political assassins, gun and knives, and America’s most-wanted men – looked to the commercialisation of violence in the US. He engaged with the media representation of these subjects, reappropriating images from newspapers. His mural Thirteen Most Wanted Men, created for the New York State Pavilion at the 1964 World’s Fair in New York City, was destroyed by officials. This exhibition highlights Warhol’s quote: “You’d be surprised how many people want to hang an electric chair on [sic] the living room. Specially if the background colour matches the drapes,” which points to how his work was often taken at face value, when, in fact, it was a complex critique.

Should we, therefore, be taking selfies with Twitter bird balloons and gold alpacas – the Chinese symbol of popular discontent – in front of a wallpaper of chains, while not fully understanding the chains that are placed on people’s freedoms in China? The comparison between the two artists furthers the understanding that Ai’s use of pop art language is an activist act in itself, using the traits of an advertiser to appeal to a consumer, but let’s hope that the fun and playful appeal of his work never leads us to forget its powerful message. 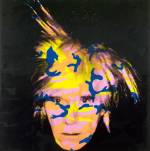 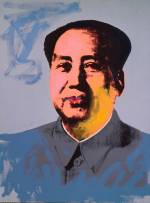 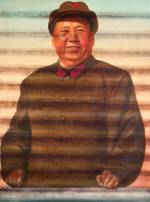 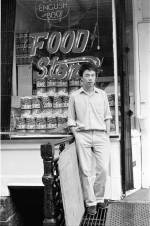