The Andermatt Concert Hall is a world-class auditorium, the first in the Swiss Alps, designed by architect Christina Seilern to help transform this former army town into a new destination for culture, as well as sport and tourism 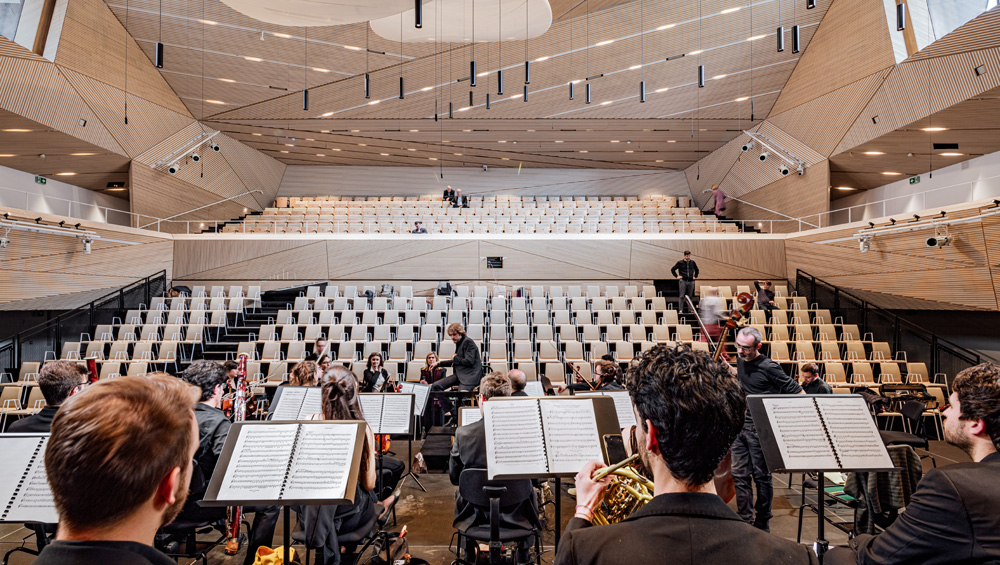 There is a curious, clunky quality to the pristine apartment blocks and hotels that fringe a new piazza in the Swiss Alpine ski village of Andermatt. They perch in this partially completed new neighbourhood of Andermatt Reuss with all the stolid, chunky, Lego-esque qualities of a Minecraft masterplan. But nestled in their midst is an altogether different kind of architectural animal, announced by a glowing, single storey, curved glass pavilion topped by a projecting canopy. A thing of lightness and grace, it is like finding a fine-boned pedigree racehorse in a field of overscaled, robotic donkeys. But it is more curious yet: underneath this elegant structure is a world-class concert hall; the only concert hall of any calibre in the Swiss Alps. 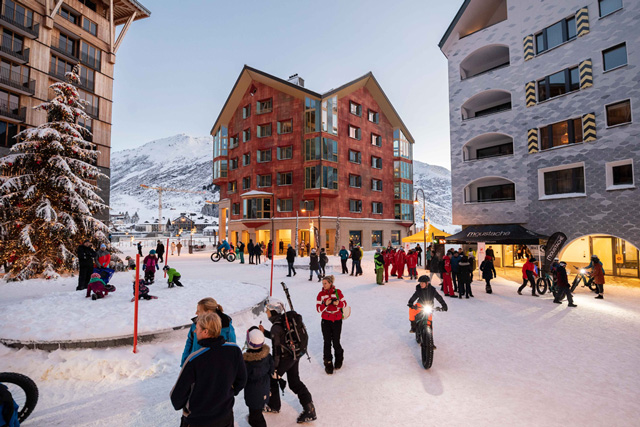 Small but perfectly formed, the Andermatt Concert Hall has been conjured with grit, determination and great skill, by the architect Christina Seilern of London-based Studio Seilern Architects, out of a most unpromising situation, requiring the transformation of a concrete, basement conference centre attached to the new Radisson Blu hotel Reussen.

It all started with Seilern being asked if she knew an acoustician. The person asking was an existing client of hers, the Egyptian property and resort developer Samih Sawiris. In 2005, Sawiris had been invited by the regional Swiss government to suggest ideas for regenerating this former army town and turning around the declining fortunes of its 1,000 inhabitants. He was so taken with its setting and strategically advantageous location – a plateau in the heart of the Saint-Gotthard Massif range, served by three alpine passes, and thus a major crossroads connecting landlocked Switzerland to its European neighbours - that he volunteered to steer the project himself, along with Belgian developer Besix. He saw its potential to become a year-round tourism and leisure destination, with impressive skiing – thanks to improved connections to adjacent resorts, it forms the largest ski area in central Switzerland - and also golf. 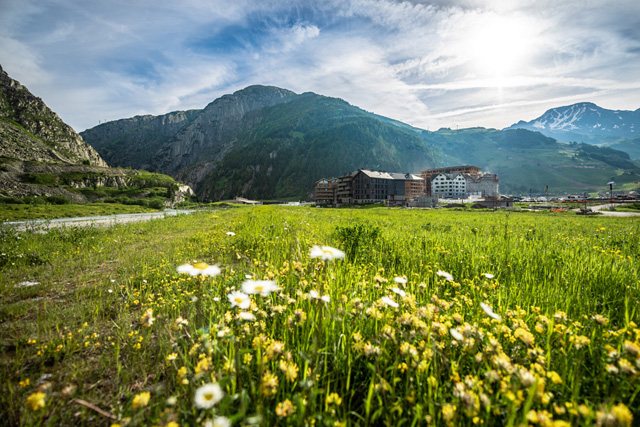 Having opened the super-luxurious Chedi Andermatt hotel (designed by Belgian architect Jean-Michel Gathy) in 2014, Sawiris realised that high-spending, quality customers could be attracted to the region, but to keep them coming back for more, there would need to be a really outstanding cultural programme. Two years ago, there was no viable venue for it, apart from the aforementioned, half-built conference centre. Hence his conversation with Seilern, who is now working on a new cultural quarter for Sawiris’ Venetian-style, lagoon-living development in the Egyptian resort town of El Gouna. She knows Sawiris for the music-lover he is (as a student in Berlin, living a stone’s throw from the Philharmonie, he says he queued and cajoled his way into almost every performance going). So she was convinced that if he wanted an acoustician, it was to do something of quality. She offered to find him one, if he gave her a job. 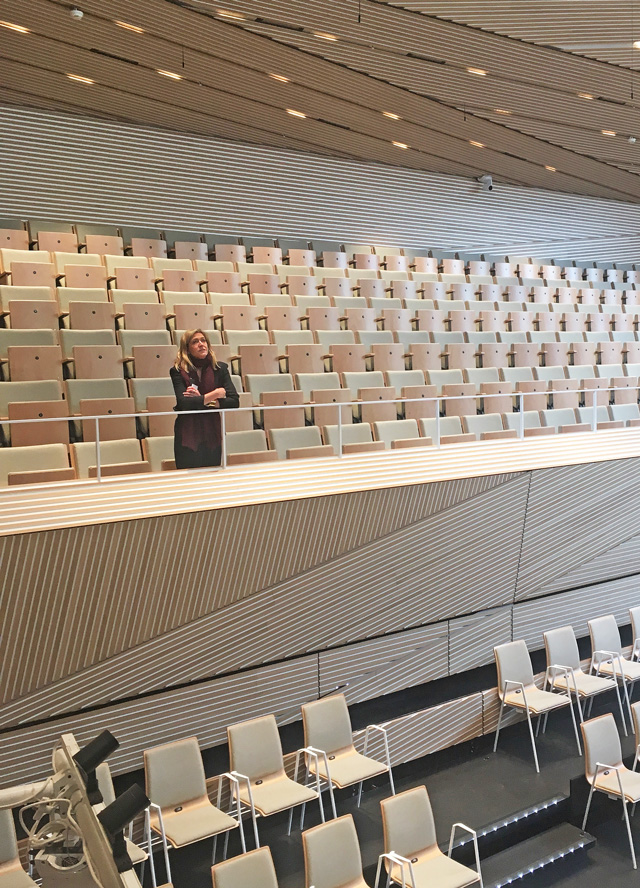 She may well have regretted that bargain at points in the following months – especially when she saw the space he had in mind: a partially constructed 6.5m-high concrete bunker at the back of the semi-constructed Radisson. With only a year and a half to opening, there was no time to make substantial changes. But she knew that to attract a really good orchestra – and Sawiris was talking of the Berlin Philharmonic opening the venue – she would need to at least double the height. She also felt that a more immersive experience could be achieved if the stage were moved from its more expedient, “shoebox” position at the end of the rectangular space to be in the midst of the audience. She persuaded Sawiris to join her on a trip to see the new Frank Gehry-designed Pierre Boulez Saal in Berlin, within the Barenboim-Said music academy founded by the legendary pianist and conductor Daniel Barenboim. The Saal is, in Seilern’s opinion, one of the finest performance spaces in Europe. 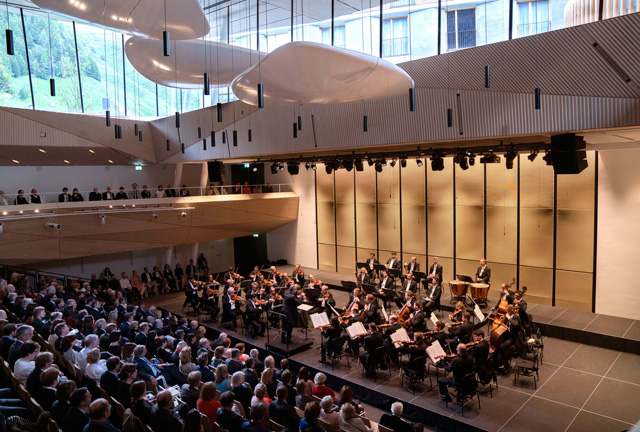 Using her clearly impressive contacts, she organised a meeting with the acoustician who had worked on this hall, Yasuhisa Toyota, and ended up meeting Barenboim himself. The acoustician agreed that no orchestra worth its salt would perform – and no world-class acoustician would design for - a venue with less than 12m-high ceilings. At this point Barenboim entered the room. Seilern knew that Barenboim’s Saal places the orchestra in the middle with the audience all around, so she asked him what he felt was the ideal location for a stage. He told Seilern and her client: “Music is not linear, music is circular. It goes everywhere. Therefore you have to put the music in the middle of the audience.” 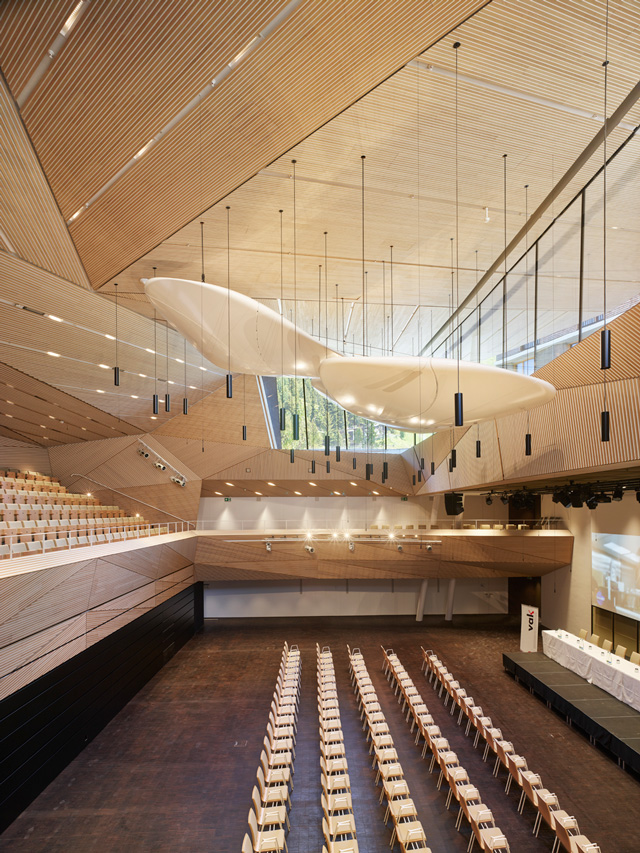 These comments gave her the vital manoeuvring space she needed to raise the roof to 12m, taking advantage of existing planning permission for a single-storey structure on that site. She also won the argument for wrapping the seating around the stage; but that required another piece of strategic thinking. With the stage repositioned, there was room for only six rows of seating. She asked the advice of friends of hers at the Berlin Philharmonic. “They said: ‘If the hall doesn’t have a certain number of rows in front of us, we can’t play,’” she says. Thus Seilern won the case for a mezzanine balcony wrapping around the space, doubling the audience to about 455 with a full symphony orchestra of 75 musicians and more than 700 with a smaller, chamber ensemble, when retractable seating can be deployed on the lower floor. With no time left to alter the foundations, a piece of swift re-engineering was required, resulting in the site being extended at the rear by a few metres, with the extra auditorium space hung off the main structure “like a backpack”. 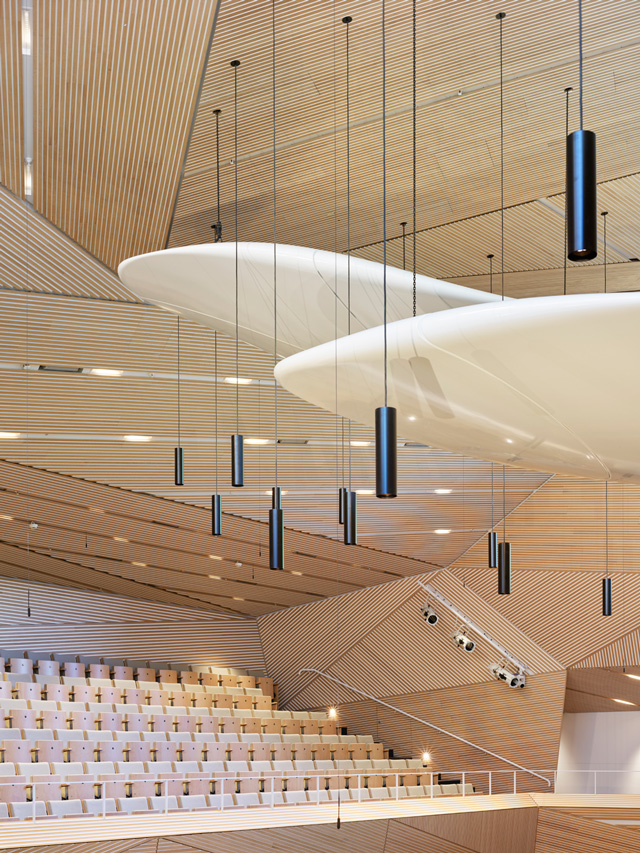 But has all of this intense liaising, negotiation, redesigning and re-engineering been worth it? On the strength of the opening night – and Sawiris did convince the Berlin Philharmonic to do the honours – it would surely seem so: the crowd demanded multiple encores from this exquisite team of musicians, having heard their inaugural programme of Mozart and Shostakovich. 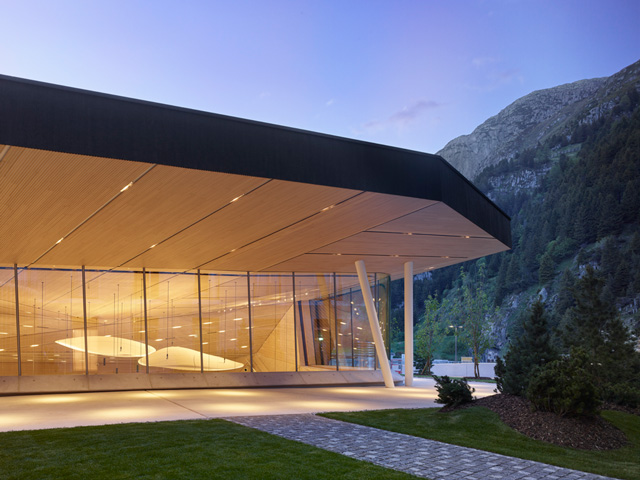 As for the visitor experience, the Andermatt Concert Hall is accessed via a glazed walkway from the hotel, or from its own discrete entrance off the main piazza. So the visitor enters in a blaze of daylight, but then descends underground, passing a modestly scaled but beautifully detailed, curving lobby/bar area to enter the auditorium. Whether you walk in at mezzanine or basement level, the auditorium is a revelation: a wide and welcoming wave of pale wood, its grooved panels arranged in a highly complex geometry, opens up around you, like the unfurling of a beautifully wrought piece of origami. The faceting of these panels has been finely calibrated by Seilern’s studio, working closely with Kahle Acoustics, to ensure that wherever you sit – on stage or in the audience – you hear as close as possible to a perfect balance of all the musical elements. 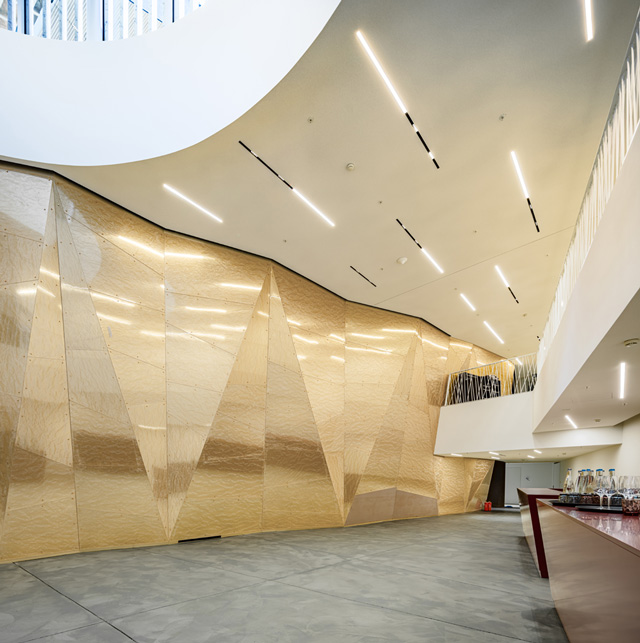 Dangling in the void above the stage are three graceful, cloud-like structures of plexiglass, which are designed both to act as acoustic reflectors but also as sculptural elements. Visible at street level, they draw attention to activity in the hall, but are programmed to be gently spotlit, even when the hall is not in use, becoming a piece of public art.

When daylight floods in through the pavilion, it bounces off the plexiglass clouds and washes over the pale, oiled-oak panels, bathing performers and audience in light as well as sound. Whether that full-on sensory experience is augmented or diminished by the visibility of clouds, starlight or snow, may end up being a matter of taste. Most auditoria plunge their audiences into darkness while concerts are in progress, so as to minimise distraction. Seilern talks compellingly of the enchantment you might experience listening to music while snow softly falls above you. 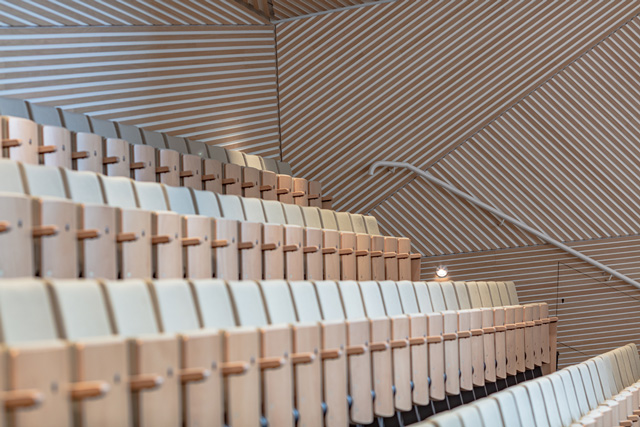 Speaking for myself, having experienced that opening concert, the fact that the orchestra was so close, and we, the audience, so well lit (in fading daylight), induced in me a sense of intense connection with the players, combined with a slight self-consciousness at my presence among them.

But it is an extraordinary space, and delivers on Seilern’s long-held belief that architecture should evoke a distinct sense of place, rather than adhere to the international forces of modernism. Carved, literally, out of the ground, it has been faceted and shaped through powerful forces like the mountainous terrain around it – albeit in this case the forces were Sawiris’ vision, Seilern’s skill and determination and the fine calibrations required by acousticians and architects working together; for one particularly complex corner, where eight panels conjoin, it took her studio three months to get the angles right, simulating the perfect positioning with 3D printers.

I asked Seilern which elements she felt were most responsive to the setting. She replied: “I think the use of wood; all of that is very alpine. The colouring of the building: it very much melts into the village. We didn’t want to make a huge architectural statement, because it would have been silly. It sits on a little pedestrian street. There is a hotel right next to it, and there will be another hotel close by. We wanted to do something quite discreet up there and have these clouds and evoke the elements. It is connecting with the village and connecting with the atmosphere, but this is also a cultural building. Because it’s a cultural building we could make it a bit more fun.”

Despite, the inauspicious start, and the struggles along the way, she seems truly satisfied with the resulting building. She says: “DH Lawrence said about writing that you sometimes have to stop trusting the author and trust the story and see where it takes you. And that’s it. You do research and you don’t know where it will take you. That first sketch that I showed Samih is very different from what we have now, but the main idea was there from the very beginning. The story unfolds itself as you discover things.” 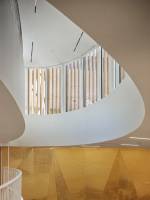