Covered in Time and History: The Films of Ana Mendieta

Covered in Time and History: The Films of Ana Mendieta

Mud, blood, fire and water: a touring exhibition of the Cuban American artist affirms her continuing relevance while revealing her formidable skill as a film-maker 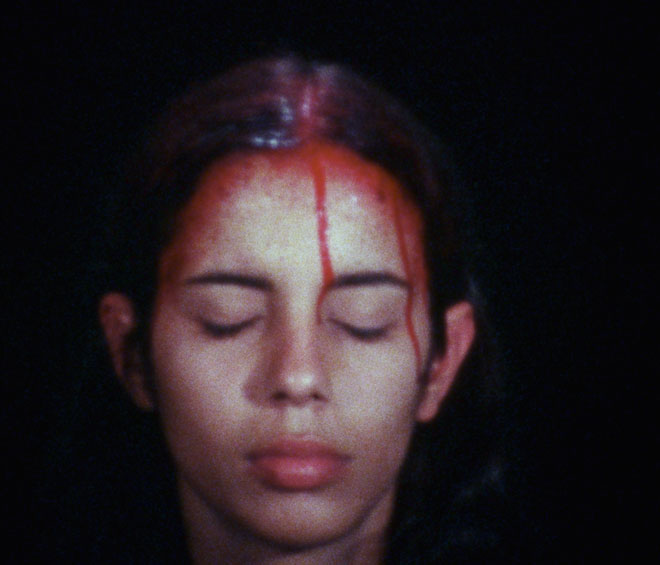 There is blood on the pavement, a sticky viscera that seeps across a paving slab before welling in the cracks. We can see it through the driver’s side window of a car. A woman in a shawl, a man in suit and tie, two men in parkas and jeans: each comes into view, pays no more than the most cursory attention to the puddle, and walks on. With each passerby, the lens flicks back to its original position. A couple attired in countercultural garb linger a second, before they, too, disappear into the distance. Finally, a shopkeeper emerges to expunge the gore, from what seems more like a duty towards cleanliness than concern about a potential act of violence. 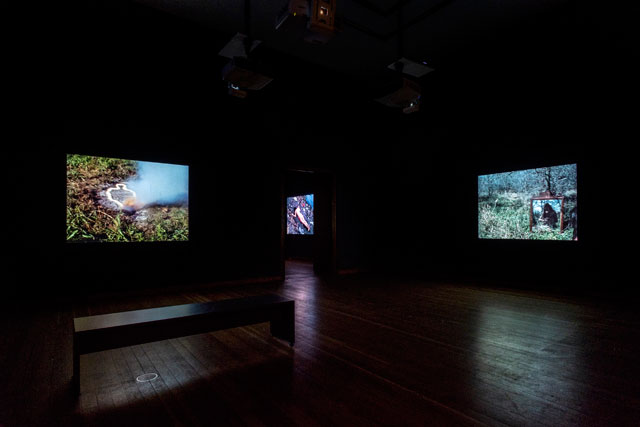 Installation view of Covered in Time and History: The Films of Anna Mendieta at Gropius Bau, Berlin. Copyright The Estate of Ana Mendieta Collection, LLC. Courtesy of Galerie Lelong & Co.

This is Moffitt Building Piece (1973), a film orchestrated by the Cuban American artist Ana Mendieta (1948-85) while a student at the University of Iowa. Mendieta was transfixed by traces and absences, especially those left by the human body. Moffitt Building Piece has often been interpreted as an unnerving statement on domestic violence. If a crime takes place and nobody does anything about it, or even notices it as a crime, does it remain a crime? 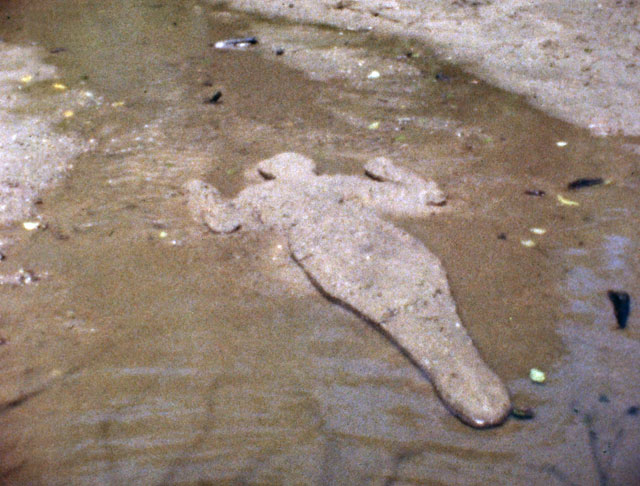 Yet there is more to Mendieta’s piece than this. As Maggie Nelson identifies in her book-length critical essay The Art of Cruelty (2011), writing on a series of photographs Mendieta took of the same event: “It intimates to passersby that a grievous and dramatic injury has taken place, but it gives no explanation, and more important, not recourse to action.” The passersby might be passersby not by choice, but because the residue gives them no space for their feelings to be transferred into activity. If anything, the narrative associations of cinema – and indeed Moffitt Building Piece’s shaky view over a mundane Midwest street makes it resemble a 70s indie thriller – makes Mendieta’s bloody pool crueller than in photography. You’re meant to do something, to drive the narrative forward. But what can you do? 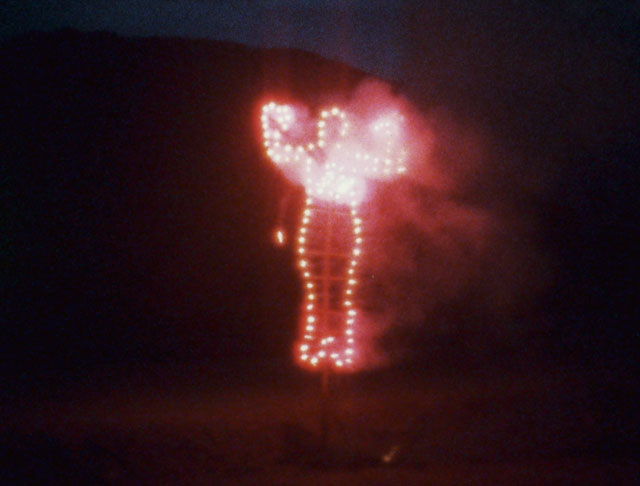 Questions of powerlessness against larger forces resonate throughout the touring exhibition Covered in Time and History: The Films of Ana Mendieta. Originating in 2015 at the University of Minnesota, this summer it was shown at Berlin’s Gropius-Bau. It will open next on 16 October at  the Jeu de Paume in Paris. The selection of films has varied slightly along the way. In Berlin, Gropius-Bau presented 23 of Mendieta’s films, which have recently been restored and digitised from their original Super 8 format, and three related photography series. The majority last a couple of minutes, some far less. Although this is a small proportion of the 100 or so films that Mendieta created in her all-too-short lifetime, it offers a rewarding primer on her work in the medium, which has often been neglected in favour of her photographic and performance work. It remains as powerful and relevant today as when it was produced. 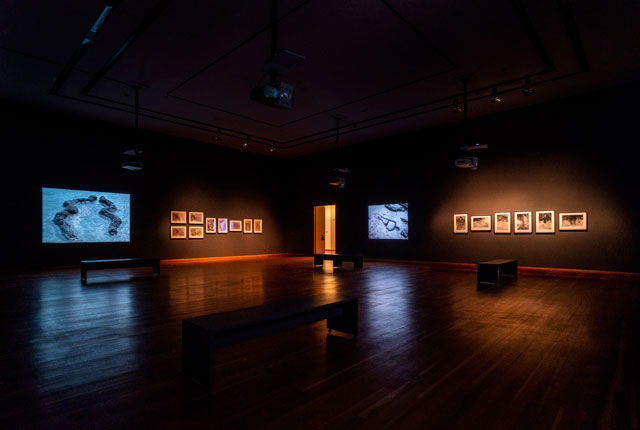 Installation view of Covered in Time and History: The Films of Anna Mendieta at Gropius Bau, Berlin. Copyright The Estate of Ana Mendieta Collection, LLC. Courtesy of Galerie Lelong & Co.

It is also a show of surpassing beauty, particularly as presented at the Gropius Bau in near-darkness, without even rudimentary wall text. One of Mendieta’s great themes was the situating of the body in nature, which even at its most banal looks bewitching through her lens. Yet this beauty goes hand-in-hand with potential jeopardy. Burial Pyramid (1974), filmed in Mexico, sees the naked Mendieta seemingly asleep under a heap of boulders, slowly regaining her breath and coming to, pushing away some of the stones as she heaves. If this is a fusion with Mother Earth, it is a fraught one: Mendieta lies on the verge of suffocation, oppressed by the physical weight of nature. In another video from the same trip, Creek (1974), she floats chest-down in a stream, her head angled to the side to avoid drowning; it feels as if she could ebb towards doom at any moment. 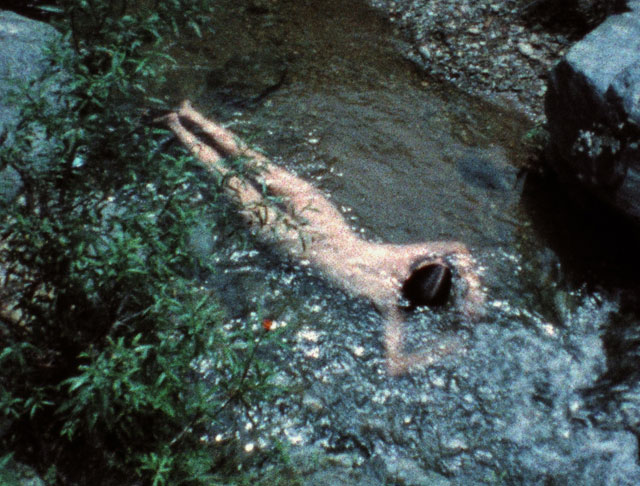 Mendieta’s childhood probably instilled this concern with impermanence and fleetingness. She was born into a prominent family in  Cuba under the regime of Batista. In 1962, three years after Fidel Castro took power, she and her sister were spirited to the US under Operation Peter Pan, which between 1960 and 1962, airlifted more than 14,000 Cuban children from Havana to the US. On her arrival, she lived for four years in refugee camps and foster homes before her mother arrived. Writing in a 1981 artist’s statement, Mendieta claimed that her work stemmed from being “torn from my homeland during my adolescence”. 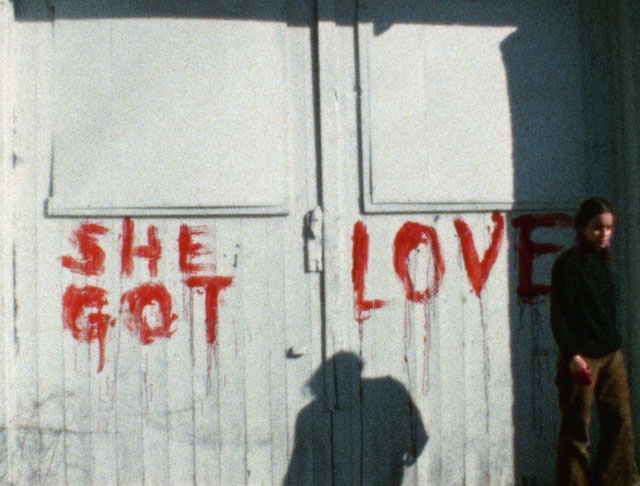 By using film, especially the fragile, stuttering products of the Super 8, Mendieta underscores this transience. Her films are themselves imperfect traces of a long-vanished action. Many of them include disappearances. In Blood Inside Out (1975), she smears her naked body in blood, creating an armour that ultimately conceals her flesh from view. The agonised Blood Writing (1974) sees her paint the phrase “SHE GOT LOVE” on a wall — an act that, especially as performed by Mendieta, seems to imply an instance of gendered violence — before leaving the scene, implying the persistence of an act’s traces after the act itself is complete. 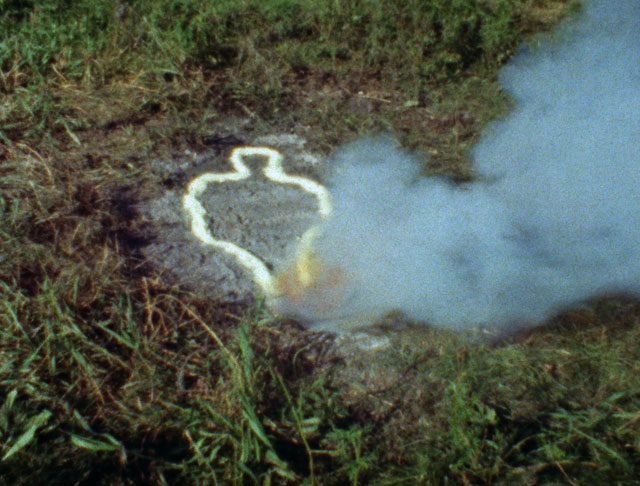 Mendieta herself vanished from film in the middle of the 70s, concerned to avoid the confrontation implicit in the presentation of the nude body. She turned for the remainder of the decade to the siluetas, in which she substituted her body for its sculptural representation. The earliest of these works presented at the Gropius-Bau, Silueta del Laberinto (1974), has an angel-armed representation in blood and mud on the floor of a pre-Columbian ruin, the setting itself a potent reminder of humankind’s evanescence. Later, she crafted siluetas from a burial shroud, gunpowder, mud, fireworks and sand. Rather than a literal representation of Mendieta’s body, these draw on archetypal female forms. They are invariably subject to some process of gradual destruction, whether swiftly through fire or slowly through the lapping of waves. 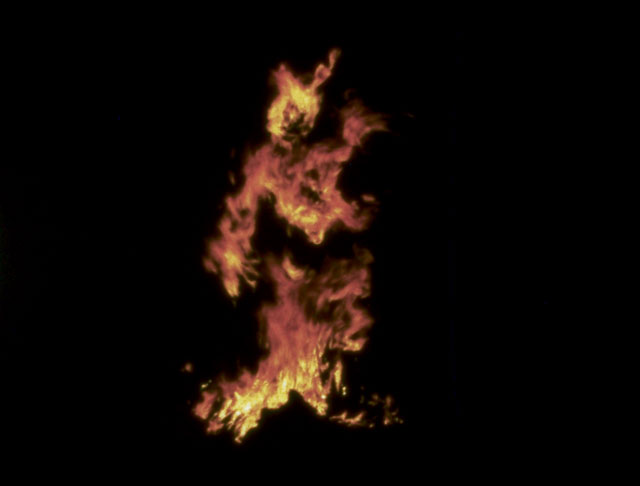 The siluetas present people’s impact on the earth and show how they ultimately dissolve back into it. In Ochún (1981) – chronologically the last film in the exhibition, and the only one with sound – the body itself vanishes, replaced by two curves of mud rock with an intimation of a submerged form between. Named for the Santería goddess of waters, it shows water flowing from Florida towards Cuba. Both a personal gesture from Mendieta to her homeland and a generalised depiction of longing against separation, it is a poetically subtle image that seems a world away from Mendieta’s more confrontational, blood-based work. Yet it shares with these pieces an acute awareness of things absent, of the echoes and erasures implicit in the visible: something that few artists have ever expressed with Mendieta’s clarity and grace.