Questions about the nature of representation have dogged the medium of photography since its conception. For some, a photographic image quite simply represents a moment. It is a record of what has passed. Others describe the dynamic as being a little more complex: the camera is not just a mechanical eye, but a means of combining elements - natural and man-made - within a picture in a formal rather than representational way.

Those in the spirit of Moholy Nagy and Man Ray assert that the photograph need not picture the outside world at all: instead an image may be created as a result of arranging objects between the photographic paper and the light of the darkroom enlarger. Depending upon the length of exposure, a photographic image may also contain temporal properties. For example, an exposure time of an hour or more can be observed as an image distortion. So too can the image be modified through the use of cropping, solarising and tinting. Even in the case of platinum and palladium printing (photographic mediums used primarily for depiction) the image content is enriched by the range of mid-tones afforded to this type of printing. When Charles Nègre, for example, photographs a ruined monastery, he is able to bring out every indentation from the moss-clad walls by virtue of the subtleties of platinum printing.

Representation is also at the heart of the photographic work of Russian artist Alexander Rodchenko, for his interest is to produce images that make the viewer aware of the medium by which the image is made. This he achieves through his unusual angled shots. In 'Electricity Pylons' (1929) his choice of angle accentuates the latticework of the pylons themselves; in choosing to present them as diagonally cutting across the picture-plane, he imbues the image with a movement, a vitality, but in doing so he flattens the image out so that the eye responds to the structure, not as a representation of a pylon, but as a pattern of light and dark.

Looking at 'Camshafts' (1929) from the series 'AMO Automobile factory', one is confronted with a rhythmic pattern of interlocking cylinders of two sizes. The close proximity of the camera to these objects has the effect of limiting the viewers' understanding of what is depicted, and in doing so it allows the image to be perceived abstractly.

The image, for Rodchenko, is not a document, but a relation between photographer, image and observer. The camera angle by which the viewer comes to apprehend the image is intrinsic to the work itself; indeed, by the angle of the image, the viewers are made aware of a visual field other than their own. So, too, one may notice a certain quality through the position of the camera, something that may not exist if shot frontally. Looking down upon a procession of soldiers, a marching brass band, or upon a busy canteen, one might be caught up by the shape, and not the individuals, of this human configuration. And this can be seen in the works of 'Sports Parade in Red Square' (1936) and 'Canteen' (1932).

The question of illumination is never far from the photographer's mind, and Rodchenko is no exception. Many of his works attain an enigmatic quality through his experimentation with light sources. Just as Moholy Nagy made images by filtering light through objects of varying degrees of translucency, Rodchenko investigates the position of the light source and its effects on the quality of glass: the difference between a glass object appearing opaque and it appearing, in the case of 'Wine Glass' (1928), as if drawn by a line of phosphorescent light. With natural light, he often plays with the ambiguity between the physical and the immaterial: in 'Steps' (1929), lines of dark grey running diagonally across the picture form a backdrop to the figures of a woman and child (instead of appearing as shadow lines cast upon a flight of steps), and in doing so bring to mind images used in Eisenstein's 'The Battleship Potemkin'.

The dynamic use of angles is not an end in itself, but a means of composing graphically. And this is best illustrated through his photomontages. These are perhaps the most humorous pieces, if not the most explicitly political. Often created in relation to a publication, whether it was to complement the poems of Vladimir Mayakovsky or as the means of political expression in a Modernist journal, these pieces exemplify Rodchenko's preoccupation with design, in particular the way typeset is integrated into the image. Like the photographs, these images are devoted to the expression of the diagonal, and this can be seen in works such as 'Crisis' (1923), which portrays two aeroplanes above a group of falling people.

One particular striking image, from Mayakovsky's book About That (1923), conveys to the viewer both in terms of content and design, a celebration of technological achievement: a rectangular length of cityscape attached at each end to a listening device and speaking trumpet respectively. It is a piece which bears a strange resemblance to some of Athanasius Kircher's acoustical designs, and it is this quirkiness combined with the eye of a formalist that seems to capture the spirit of Rodchenko's work. 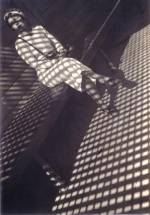 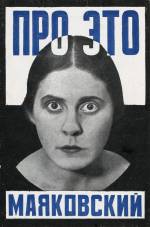 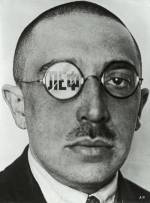