With rivers and wetlands at its thematic centre and Australia’s First People key, the 2022 biennale asserts that sustainability must no longer be a theme, but an action. This is art that packs a powerful political punch 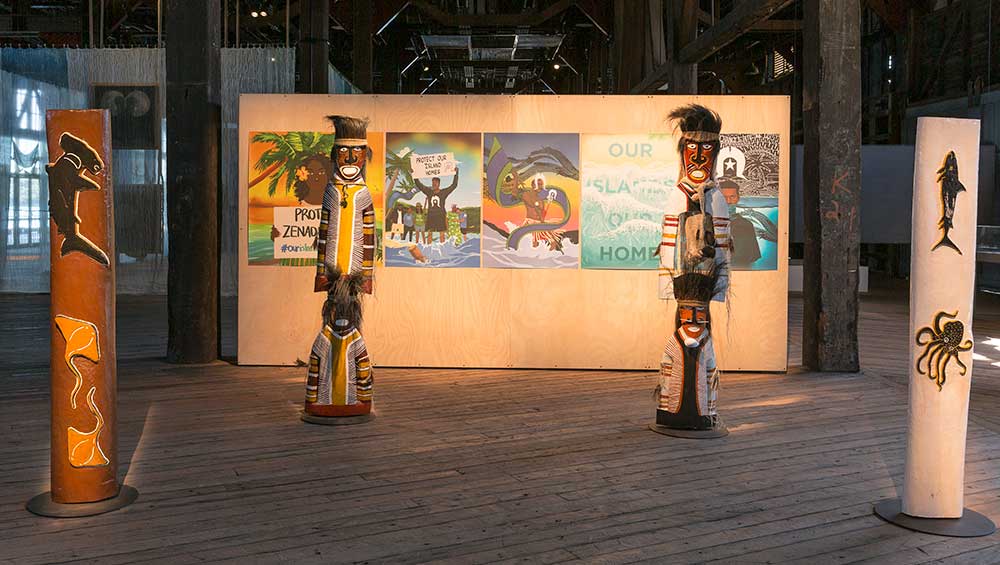 Living in Scotland, I shared the hopes and passion of those delegates from all over the world who attended the 2021 United Nations Climate Change Conference (COP26) in Glasgow towards the end of last year. Yet four months later, as I left for Australia, media footage showed the most horrific plumes of black smoke belching into the environment, caused by Vladimir Putin’s invasion of Ukraine.

The appalling flooding this year in Queensland and New South Wales, so soon after the devastating bushfires of 2019-20 and the ramifications of the Covid 19 pandemic, made for a potent mood of dissatisfaction in Australia. The federal election on 21 May saw an unprecedented swing away from the governing coalition and its conservative policies, leaving the centre-right Liberal party with the lowest proportion of seats since the party’s first poll in 1946, and the removal of the incumbent prime minister, the climate change denier Scott Morrison. The Greens increased their seats and the new Labor party prime minister, Anthony Albanese, alongside a group of female independent candidates pushing for a radical but measured approach to environmental issues, have assumed power. Such a dramatic political shift epitomises the stance of the 23rd Biennale of Sydney, of consciousness-raising in response to the climate emergency. 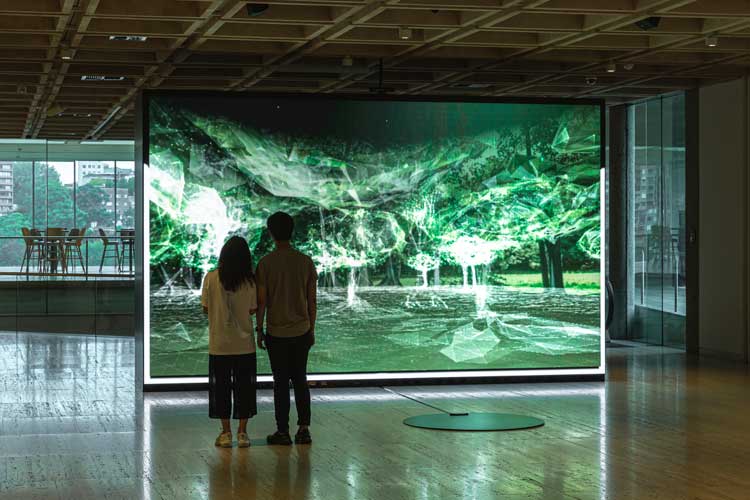 Entitled Rīvus, the Latin word for a stream, the 2022 biennale asserts that sustainability must no longer be a theme, but an action. Rivers, wetlands and numerous salt and freshwater ecosystems are at the centre of the politically charged atmosphere of this year’s biennale. Australia’s First People are key, following on from two years ago when Brook Andrew, the biennale’s first Indigenous artistic director presented Nirin. Both biennales illustrate that art can inspire wonderment through immersive projects and that creativity can contribute to political debates surrounding sustainability.

Artists, architects, designers, scientists and communities have been selected by this year’s artistic director, the Colombian curator José Roca, to address the urgent issues of environmental destruction with great ingenuity, posing questions that endow legal personhood to non-human entities such as rivers, mountains, plants and animals. Indigenous Australian culture is based on non-human entities existing as living ancestral beings. There are numerous profound projects and artworks here that illustrate and invigorate an empowered view of our precious habitat through questions such as: Can a river sue us over psychoactive sewerage? Will oysters grow teeth, in aquatic revenge? Rivers are presented as givers of life. Historically, they enabled travel and communication. Colonial enterprise benefited from the ability to set up transport and industry, and rivers were often places of conflict and opportunism.  The Latin root rīvus is also the origin of the word rivalry.

This year’s biennale uses the wetlands along the waterways of the Gadigal, Burramatagal and Carbrogal peoples as its conceptual framework. The inhabitants of these imagined ecosystems are not individual artists, but rather artworks, experiments and activist projects. The biennale is rich in the research of hundreds of participants, including Dr Anne Poelina, a Nyikina Warrwa woman, who recently published a paper about the recognition of the legal rights of rivers and has played a role in the personification of the Martuwarra (Fitzroy) River. The biennale’s conceptual framework enables artists and scientists to explore the “delta” of interrelated ideas, through “meandering tributaries”, to include conventionally unrelated facets of knowledge, such as river horror and counter-mapping. In so doing, Rīvus is seeking to achieve what can become sustainable methods of co-existence. The foregrounding of First Nation cultural knowledge is one of the elements of continuity between Nirin and Rīvus, enabling us to unpack accumulated western knowledge systems and for the biennial to retain relevance.

Homage is paid to Joseph Beuys (1921-86), the artist and activist who, in 1982, proposed a plan to plant 7,000 oak trees in the German city of Kassel in protest at government ineptitude and the need to address urgent environmental issues. The work, 7,000 Oaks: City Forestation Instead of City Administration, also sought to address the lack of green areas in a city severely damaged in the second world war. Two years later, Leon Paroissien, artistic director of the 1984 Biennale of Sydney, commissioned the planting of a single tree as a homage to Beuys. A Moreton Bay Fig was chosen in discussion with Beuys and planted in the grounds at the Art Gallery of New South Wales, establishing one of the world’s earliest environmental artworks. In the same ideological strain, Nick Waterlow (1941-2009), artistic director of the 1979 biennale, European Dialogue, played a pivotal role in challenging Australian attitudes within global culture. Always ahead of its time, the Biennale of Sydney, guided early on by Waterlow, championed the art of Australia’s First Peoples, on the international stage. A number of projects have been made this year, including a performance piece by the Australian artist Mike Parr, who made an earlier homage to Beuys at the biennale in 2006.

One of the most profound projects is the participation of Torres Strait 8, a collective formed in 2019 to represent Zenadh Kes (Torres Strait Islands). Yessie Mosby, the group’s spokesperson and claimant asserts: “We must look after our island, the way it has looked after us. The bosom of this island is our mother, and the water surrounding it is our father. We have to protect them, our islands, our home.”

As traditional owners of Zenadh Kes, whose inhabitants’ roots go back more than 60,000 years, the Torres Strait 8 are taking the Australian government to the Human Rights Committee of the United Nations for its derisory action on climate change, in a landmark human rights complaint. It cites rising sea levels, coral bleaching, damage due to erosion of coastal land (where their forebears are traditionally buried) and the manner in which it impacts their traditional life and culture.

Mosby’s “art as protest” installation, Maluw Adhil Urngu Padanu Mamuy Moesik (Legends from the deep sitting peacefully on the waters) (2022), was commissioned by the Biennale of Sydney and the Institute of Modern Art, Brisbane. It is made from: four carved totemic poles with materials found on his island home including: yellow cedar wood; red, yellow, white and black ochre; human hair; pig tusks; eagle, rooster, cassowary and cockatoo feathers; white sap; mangrove bark; cowrie and pearl shells; and bamboo cane. He is motivated by the impact on his own children of becoming refugees of climate change, which he finds a distressing prospect. “This would be a catastrophe for Torres Strait Islanders. Our land is the string connecting us to our culture. It ties us to who we are. If we were to move, we would be like helium balloons disconnected from our culture. Our culture would become extinct. We would be a dying race of people.”

Mosby describes the life on Masig Island, halfway between the tip of Cape York [Queensland] and the mainland of Papua New Guinea: “I wake and sleep to the sound of the ocean breathing its waves on to the beach. My genealogy, my ancestors, my family tree lies here. This island is my library, my school and my storyteller. It’s love, it’s life and it’s ancient. There is a mythical, spiritual aura around this place. We are not migrants to this sacred land, we have lived here for generations.” 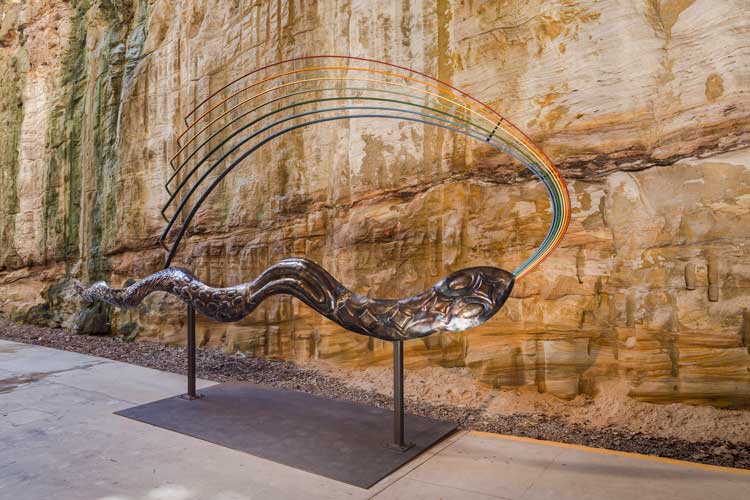 Badger Bates. Save our Ngatji (Rainbow Serpents), creators of spiritual rivers connecting water, sky and land, 2022. Courtesy the artist. Made in collaboration with Matt Mewburn and the team at Eveleigh Works. Commissioned by the Biennale of Sydney with generous support from the Australia Council for the Arts. Installation view, 23rd Biennale of Sydney, Rīvus, 2022, The Cutaway at Barangaroo. Photo: Document Photography.

Voice of the Baaka River, 2022 (film still), with the text spoken by Badger Bates, a Barkandji man from the Baaka River region, portrays the disastrous plight of the once-vital river in the Murray-Darling basin, through inappropriate agricultural practice since white settlement. Poisoning of the water and dehydration have led to mass fish-killing episodes, most recently in 2018, when more than a million fish died. In cultural terms, the demise of the indigenous peoples’ land rights has caused irrevocable damage and loss. 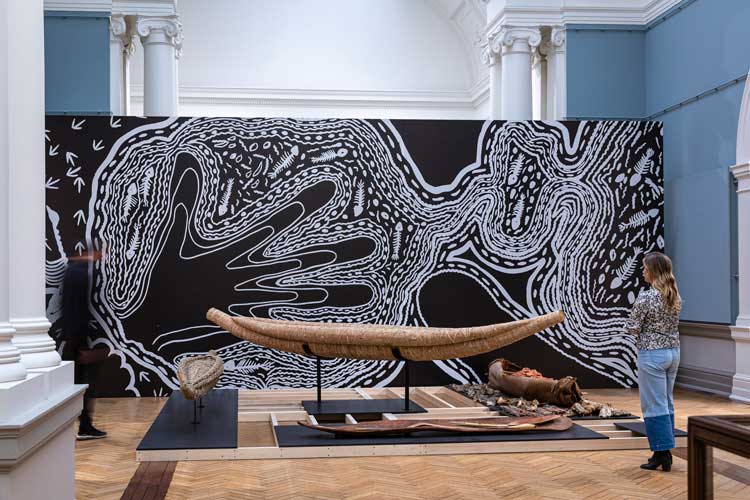 Badger Bates. Barka The Forgotten River and the desecration of the Menindee Lakes, 2021-22; Wiimpatja Paakana Nhaartalana (Me Fishing in the Darling River), 2004; Warrego - Darling Junction, Toorale, 2012; Ngatyi Yarilana (Rainbow Serpents having young), 2007; and Barka (Darling River), 1992. Presentation at the 23rd Biennale of Sydney (2022) was made possible with generous support from the Australia Council for the Arts. Courtesy the artist. Installation view, 23rd Biennale of Sydney, Rīvus, 2022, Art Gallery of New South Wales. Photo: Document Photography.

Bates’s own work, Baaka, the Forgotten River and the Desecration of the Menindee Lakes (2021-22), comprises linocuts replete with ubiquitous images: Bates fishing in the Darling River, Rainbow Serpents and the Drying Lake. It is hung against an amplified section of his linocut on the wall at the Art Gallery of New South Wales (AGNSW), along with the first Barkandji canoe cut from a river red gum tree in more than 70 years. Bates led the collaboration with staff and students from Wilcannia Central School and the Torres Strait Islander team at AGNSW. His poignant message is: “When they take the water from a Barkandji person, they take our blood. They’re killing us. It’s not just us Barkandji people who are feeling it. It’s the white people and other people too … How can I teach culture when they’re taking our beloved Baaka away? There’s nothing to teach if there’s no river. The river is everything. It’s my life, my culture. You take the water away from us, we’ve got nothing.”

Roca, an appropriate choice as artistic director for Rīvus and well versed in its conceptual framework, is also curator and artistic director of FLORA ars+natura, an independent space for contemporary art in Bogotá, and curator of the LARA collection, Singapore. He co-authored Transpolitical: Art in Colombia 1992-2012 (with Sylvia Suárez) and Waterweavers: A Chronicle of Rivers (with Alejandro Martín). His biennale was intended to have a low carbon footprint so, rather than fly back and forth from his home in Colombia, he lived in Sydney for the 18 months’ lead time and made Zoom calls to network around the world. He was joined in this, the creation of an inspiring 23rd Sydney Biennale by four curators on the ground: Talia Linz, Paschal Daantos Berry, Anna Davis and Hannah Donnelly.