Premiered at the Glastonbury Festival, Ai Weiwei: Yours Truly is a moving and powerful documentary about the horror of political imprisonment, offering insights into the artist’s own struggles and those faced by freedom fighters across the world 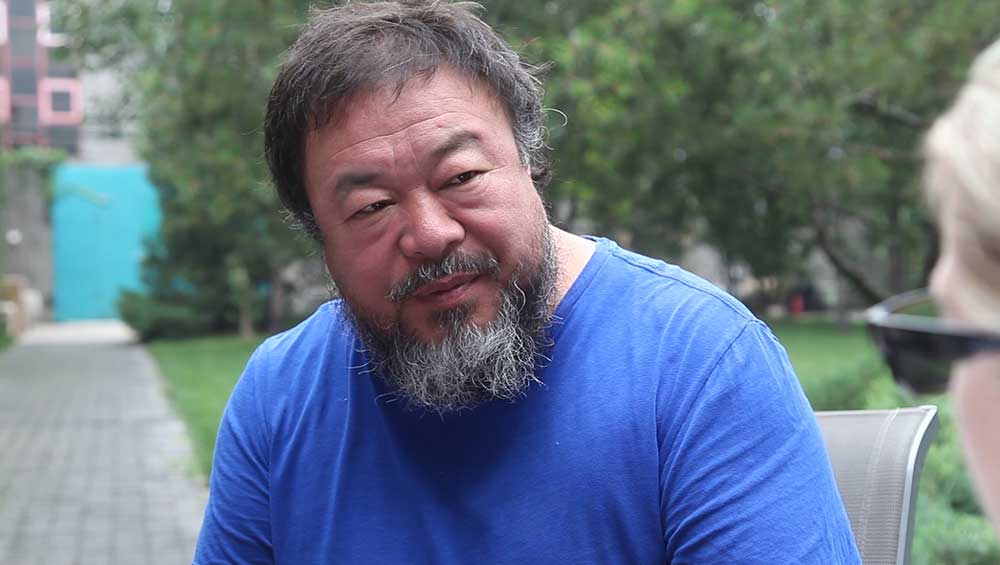 Glastonbury Festival is symbolic of personal freedom and has always embraced a political aspect alongside this. Although for many there, liberty may be focused on individual hedonism, without thought for the wider fragility of this freedom, or how our personal freedom depends on the efforts and sacrifices of others, the festival is keen to underline that, as ever, the personal is political and the stakes are high. The freedoms we enjoy are not inevitable, nor are they universal, and they must be fought for.

President Zelenskiy of Ukraine delivered a speech to the vast crowds via huge screens at the side of the stage. “We in the Ukraine would also like to live the life as we used to and enjoy freedom and this wonderful summer, but we cannot because the most terrible thing has happened … Russia has stolen our peace, but we will not let Russia’s war break us … [We] are all under threat now, so I turn to you for support. Glastonbury is the greatest concentration of freedom these days and I ask you to share this feeling with everyone whose freedom is under attack. Spread the truth about Russia’s war; help Ukrainians who are forced to flee their homes because of the war … Put pressure on all the politicians you know to restore peace in Ukraine. Time is priceless, and every day is measured in human lives. The more people join us in defending human life and peace, the sooner Russia’s war against Ukraine will end. Prove that freedom always wins.”

The Libertines then came on and delivered the best set I had ever seen them play live, reminding us why they had, for so many people, been beacons of a certain sort of personal freedom and camaraderie. We cannot take our liberties for granted, as Zelenskiy reminded us; war and authoritarianism spread quickly and even going to a festival or listening to music can become impossible in just days or months. This was also the same weekend that the supreme court in the US overturned Roe v Wade, which almost 50 years before had granted women the right to terminate a pregnancy, and sparked protest by several musicians at the festival. In the Greenpeace area, meanwhile, activists reminded us of the climate crisis, and Greta Thunberg gave a speech on the Pyramid Stage. It was impossible, for all the joy and hedonism, to ignore the wider political crises in the world, and the freedoms and lives at stake.

The festival also premiered Ai Weiwei: Yours Truly, directed by Cheryl Haines, in partnership with Amnesty International. At the Gas Tower in the Shangri-La area on 23 and 24 June, festivalgoers were able to watch the screening of this remarkable film ahead of its UK release. The documentary was a triumph, explaining precisely why art must be political and why it is for ever entwined with freedom of speech. As Ai Weiwei states early in the film: “It is the obligation of artists to fight for and to protect freedom of speech; that is the soul of any creativity.” This documentary is testament to that.

Beginning with an explanation of Ai Weiwei’s own experience as an artist-activist, imprisoned for his efforts to reveal the names of the more than 5,000 children killed in the Sichuan earthquake in 2008 (whom the Chinese government had refused to identify), the film makes clear the horror of being incarcerated “in a fashion like kidnapping” and being told he would not see his son for 13 years. Charting Ai Weiwei’s eventual release, in the wake of global activism in his support, the film explains that Ai Weiwei’s father, a poet, had been exiled as a dissident to north-east China by Communist officials in the 1950s. Ai Weiwei, who spent his childhood in exile, recalls being a young boy and seeing his father receiving a postcard, which reminded him of his writing in the 1930s: “I see the expression on my father’s face, how that moved him.” 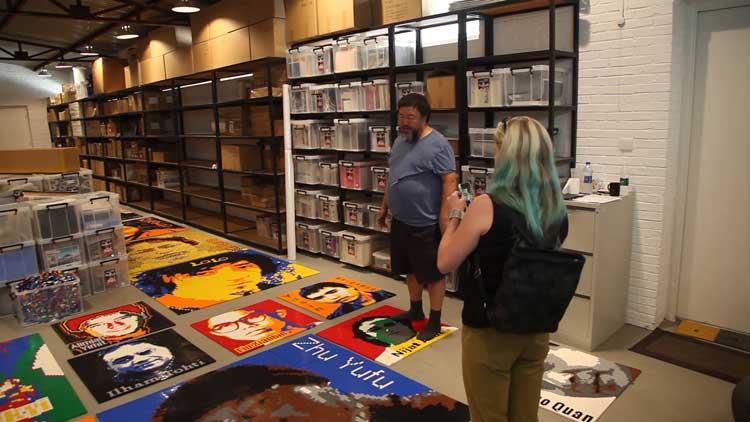 The rest of the film is focused on Ai Weiwei’s collaboration with Haines, who, in 2014, worked remotely with the artist (still forbidden from leaving China at that time) for a site-specific installation about the incarceration of individuals fighting for freedom, on the island of Alcatraz in San Francisco, titled @Large: Ai Weiwei on Alcatraz. The work, made from Lego bricks, includes 176 portraits of prisoners of conscience. Embracing the haunting, historically significant spectre of the prison, itself a site of suffering, this exhibition told the story of the artist’s development of political consciousness, as well as many individuals, such as Martin Luther King, first world war prisoners of conscience, and Native American activists, who also sacrificed their freedom for the protection of others. This is the crux of the documentary; those who are brave enough to fight for the liberty of others are typically punished the most severely. 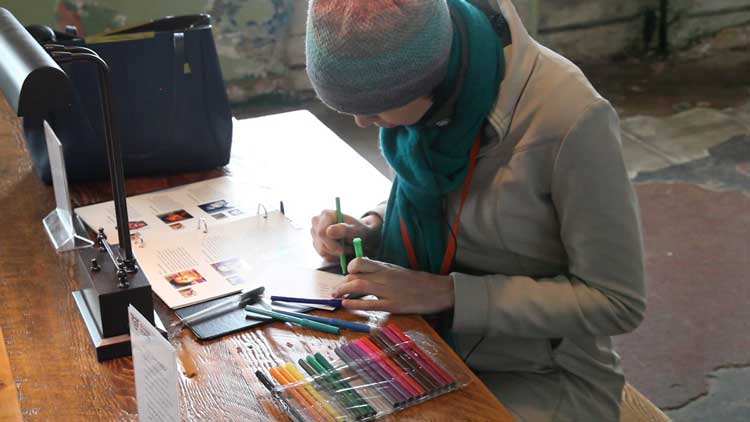 Ai Weiwei’s memory of his father’s joy at receiving a postcard when in exile also informs the next stage of the exhibition and the documentary. In the film, we see how visitors to the exhibition were encouraged to write a postcard to prisoners of conscience around the world, organised by Amnesty International, and at the festival, too, those attending are given blank cards to write on, passing on this practice of reaching out, in the belief that even small acts of human communication and solidarity can, as Ai Weiwei experienced first-hand, make a real difference. The postcards were sent on to prisoners in Bahrain, China, Iran and Vietnam. This film, and the exhibition and screening attached to it, is a call to action, a communal reaching out and a very personal request to protect international human rights and freedoms, those we may often take for granted until confronted with these stories and people.

The last part of the documentary, which is especially moving, reveals the effect that these postcards (more than 90,000 were sent from the original exhibition) had on those who received them. Featuring interviews Ai Weiwei had with fellow political prisoners, such as Chelsea Manning, who leaked military and diplomatic documents to WikiLeaks, John Kiriakou, the CIA whistleblower who exposed the agency’s use of torture, and Ahmed Maher, an Egyptian activist, these testimonies confirm Ai Weiwei’s own childhood observance and adult experience of the solace to be found in small acts of communication and solidarity from strangers.

A truly beautiful, powerful and extraordinary film and wider project, there could be nothing more humbling to experience in a festival designed to celebrate artistic freedom. Yours Truly was a heartening collaboration and a reminder, at times a truly heartbreaking one, of the fragility of personal and political freedom. Along with the other gestures and words and songs of solidarity, this Glastonbury was a bittersweet one, reminding us of all the joy and liberty to fight for, and the time running out to do so.

• Ai Weiwei: Yours Truly is now available to stream online in the UK.