Ai Weiwei is showing at four New York City galleries simultaneously. To mark this, Royal Academy America hosted an informal event at which Ai talked to members and the general public about his work and his mission

For the first time, Ai Weiwei is showing works at four galleries simultaneously: at the Lisson Gallery, the Mary Boone Gallery (both at the Chelsea and Midtown spaces) and at Deitch Projects, all in New York City. Through his large cast-iron trees, the artist points out how a country lost its forests, and through drawings on a large wall and the Laundromat installation (at Jeffrey Deitch), about the refugee crisis, focusing on the camp at Idomeni, he addresses how migration is about humanity.

On this occasion, at an informal event, where Royal Academy America members and the general public were present to hear Ai Weiwei talk about his work and his mission, he was introduced by Greg Hilty, curatorial director of the Lisson Gallery New York, and took some questions from the audience.

He talked about how and why trees disappeared in northern China, explaining that his trees commemorate what happened in China in the late 1950s and 60s. He talked about migration and said that, historically, people moved around and that many families in New York were refugees, and that we are all immigrants. He also talked about the election in the US, saying that it was not only about refugees, but about human dignity, about human rights, and about what kind of fundamental values we are defending. Refugees, he said, are just one phenomenon in this political situation.

He mentioned that he has visited hundreds of refugee camps all over the world and said that he was planning to go to the US-Mexican border the following day and then to Turkey, Jordan, Israel and Africa. He is making a documentary film on the refugee situation.

He said that in his shows he always tries to include current situations or political views: he says that’s all artists can do.

• Ai Weiwei: 2016 Roots and Branches is at the Lisson Gallery, New York, and also at the Mary Boone Gallery, both at its Fifth Avenue and Chelsea locations, New York. Ai’s project Laundromat is debuting at Jeffrey Deitch, New York. All four exhibitions are on until 23 December 2016. 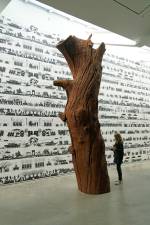 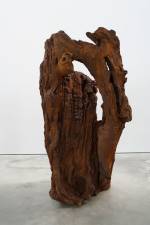