Ai Weiwei: According to What?

Ai Weiwei: According to What?

The Brooklyn Museum marks the final stop on this North American touring exhibition by Chinese artist Ai Weiwei, titled According to What? Covering 13,000 sq ft (1,200 sq metres) and spanning 20 years, it is vast. Anyone who has seen previous renditions in Washington, Indianapolis, Ontario or Miami will discover new work here in Brooklyn, not least the striking addition of six huge dioramas made from iron boxes, titled S.A.C.R.E.D., in the entrance of the museum. The boxes are mini-prisons that show scenes from Ai’s 81-day detainment in a Chinese jail during 2008.

Also new is Ye Haiyan’s Belongings. A feminist activist who was kidnapped by the secret police on 6 July 2013, Ye was forced to hastily pack her family’s belongings when she was subsequently evicted from her home. She was then dumped with her bags and boxes at the side of a road, and told never to return. After hearing her story, Ai photographed everything Ye owned. These photographs form wallpaper depicting everything from schoolbooks to slippers to sex toys, a personal archive and history embedded in politics. The adjacent room shows a film, Stay Home, intimately documenting a woman named Liu Ximei, who contracted HIV after having a blood transfusion. If Liu were to protest about the treatment she received leading to her infection, her access to medication would be blocked.

This is a show of material wealth and emotional poverty articulated with tactile abundance: piles of pearls, salvaged steel rods, porcelain crabs, bike wheels, backpacks and intricately carved rosewood. Underneath this visual feast, however, is a bitter taste of the toxic political and social structures within China. Construction site images of Beijing’s Olympic Stadium 2008 (2005-8) cover the walls of one gallery, a project Ai collaborated on, but now describes openly as propaganda. A small hand-carved box belonged to Ai’s father is displayed open, alongside a largesealed Cube in Ebony that was carved using traditional methods in 2009. Ai’s father was also captured, in 1958, held by police, interrogated for being a famous poet, then banished from the city to the countryside.

It is impossible to tell whether the political provocations by Ai serve the art, or the art serves the provocations. It is reminiscent of the recent media attention given to Russian band Pussy Riot, whose music is a vehicle for political expression and activism. Similarly, Ai is bound by the laws and limitations within his own country, widely known within western society yet muted to the very audience he is wanting to reach. The artwork is charged with social critique while it probes and reveals political structures in the hopeful pursuit of change.“Art is about change, unpredictable and danger[ous],” says Ai.

Straight, salvaged steel bars from the Sichuan earthquake on 12 May 2008, in which a school collapsed, cover the floor. Lining the walls of the same room are 70,000 names, mostly those of the schoolchildren killed in the earthquake. Ai and his team met with the parents who refused to stay silent, listening to them and creating a combination of database, artwork and memorial. This artwork is morally symbolic of corruption, one of the main reasons his team were arrested more than 40 times while gathering names. Perhaps this was an influencing factor on Ai’s incarceration and subsequent surveillance. “Never trade freedom with any other kind of leisure or property, the freedom is in my mind,” says Ai. 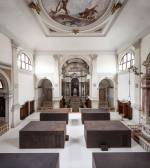 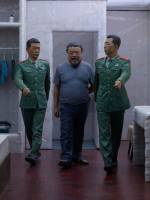