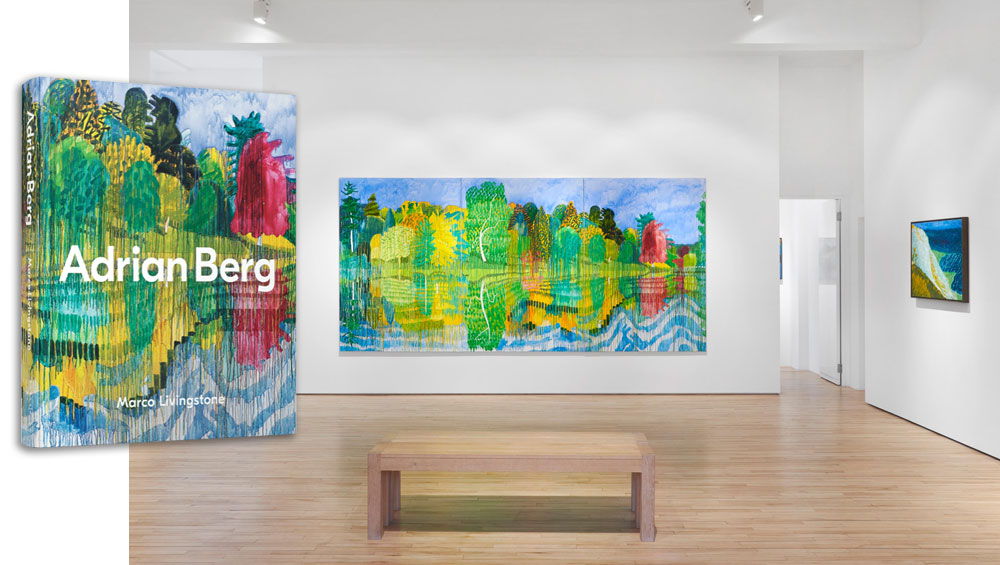 The retrospective exhibition of major paintings by Adrian Berg RA (1929-2011) at the Frestonian Gallery in London celebrates the publication of the first major monograph on his life and work. Although he received great recognition through exhibitions in the 1980s and 90s, with Peter Fuller championing his work, a full examination and reappraisal of the painter’s superb oeuvre is long overdue. Berg had a great influence on peers such as David Hockney and RB Kitaj, and several generations of his students in London.

The new study is a lavish production that does justice to his engagement with the natural world, with painting that celebrated nature and the ephemeral quality of trees, flowers and the environment, with an excellent text by his friend Marco Livingstone, together with essays by Paul Huxley and Samuel Clarke. Clarke’s contribution is “Berg’s Late Working Methods: An Eyewitness Account”; Huxley writes on “Adrian Berg and Teaching” at the Central School of Art and Design, Camberwell School of Arts and Crafts and the Royal Academy. His impact as a teacher was significant, as the interview with former student Tracey Emin reveals.

Berg was educated at Cambridge (where he studied English) and Trinity College, Dublin (where he studied education) and travelled in Italy as a young man before studying art in London. He was highly cultured and, as a consequence, his ideas and written words are also compelling: the book includes examples of Berg’s poetry, other writings and views on other artists. It is a meticulously conceived and well-designed volume, providing excerpts from numerous published writings on the artist’s life and work.

The book and exhibition begin in the mid-60s with a range of impressive and detailed landscape works made soon after he graduated, in 1961, from the Royal College of Art. Being slightly older than most of his fellow students (Berg was eight years older than Hockney), he was influential in sharing his love of literature and poetry. Perhaps his academic training (he first applied to study medicine) gave him the patience and attention to botanical detail. The ability to work from nature creating detailed perceptual drawings led to the recording of ephemeral detail of Regent’s Park. They recall a plethora of art historical sources, from Italian tapestries to Monet. The manner in which he takes the studies and translates them into visual music is unique in British art. His interest in the seasons in works such as Grass (1964) and October (1968) might well have led Hockney, many years after his pop art works and living in Los Angeles, to paint The Four Seasons (2012).

I was so happy to discover Berg’s work through Peter Fuller, at the Serpentine Gallery in 1986, soon after moving to the UK from Australia. Attempting to adjust to short days and grey Scottish skies, I found Berg’s visually exciting palette uplifting. In works such as his Untitled (Regent’s Park Dusk) (1982), included in the Frestonian exhibition, and Gloucester Gate, Regent’s Park, Night, Autumn (1982), I found more precise yet exploratory constructed works than Arthur Boyd’s Four Times of Day, Pulpit Rock (1983). (I was then writing my PhD on Boyd.) Boyd’s Bundanon work was made after returning to Australia from 30 years in London and Suffolk. Berg’s Regent’s Park works were his sole obsession for 25 years, for which, he received wide acclaim in the London art world. The most significant recognition came in the form of solo exhibitions at the Serpentine Gallery (1986), Barbican Centre (1993) and the Royal Academy (1999 and 2009).

From 1964, Berg had his home and studio in the Paul Nash terrace at Cambridge Gate, Regent’s Park, giving him the perfect vantage point for uninterrupted painting. In his Regent’s Park works, there also appears to be an acquaintance with formal Italian Renaissance gardens, of Persian rugs and the patterning of non-western art. I wonder if he knew of Sir Geoffrey Jellicoe’s labyrinthine aerial view drawings for landscape designs that fused classical principles with modernist simplicity? Livingstone’s splendid study of Berg’s life goes a long way to helping us understand his extraordinary brilliance as a colourist of rare intuition and observation, yet it allows the reader and viewer to enjoy the work independently as well.

In 1986, a necessary but traumatic move from his home at Cambridge Gate brought to an end the exceptional relationship with Regent’s Park. In due course, he found new inspiration at the Royal Botanical Gardens at Kew and at Syon Park in west London and, subsequently, in the glorious gardens at Stourhead in Wiltshire, Sheffield Park in East Sussex and Wakehurst Place in West Sussex, and along the Sussex coast near his new home in Hove. It was these subsequent works that allowed his incredible Regent’s Park works to inform the new, with a bolder palette and the marvellous patterning in nature with the introduction of bolder and more geometrically constructed elements. The use of lakes enabled mirror images; the bold skeletal forms of trees reflected in Second Lake, Sheffield Park Garden, Sussex Weald, 29th & 30th August (2003) are mentally and visually dynamic.

The paintings in the Frestonian exhibition from this late period span the period from the compositionally superb Beachy Head works (1994-96), through to his exquisite renderings of the glasshouses at Kew Gardens, and finally to his masterly triptych, Stourhead 25th, 26th and 27th June (2000). The final painting in the exhibition, Enter the Garden (2010), was finished a year before his death in 2011, at the age of 82.

Livingstone identifies the importance of Berg’s work to a new audience: “Today, with ecological concerns at the top of the agenda and a new generation desperately demanding measures to save the planet from damaging climate change that would irrevocably risk the long-term survival of our species and all manner of living things, Berg’s implicit insistence on humanity’s responsibility for treating nature respectfully could not be more urgent or necessary.

“Within the narrower but important issue of the future of art itself, Berg’s constant reinvention of the terms of painting, his repeated demonstrations that as a medium it remains as alive as ever and as pertinent a means for communicating a coherent world view, is a matter for celebration. Berg’s paintings, a decade after his death, return us time and again to the here and now, to an intense appreciation of our surroundings and to the joy to be discovered in looking very closely at the world and reshaping it, as he did, according to our own eyes and temperament.”

Grounded in perceptual observation, but full of the dynamism of hope, Berg’s work is among the finest British landscape painting of all time.

• Adrian Berg by Marco Livingstone, with contributions by Paul Huxley RA and Samuel Clarke, is published by Lund Humphries, price £40.