Kara Walker at the Met: After the Deluge
Metropolitan Museum of Art, New York
21 March-30 July 2006

Kara Walker functions as both subject and curator of a current exhibit at New York's Metropolitan Museum of Art, the second instalment in a series developed by the museum's Department of Nineteenth-Century Modern and Contemporary Art featuring work by contemporary artists. While in the recent past major museums have offered contemporary artists the role of curator, this series is the first time that the Met has done so. Apparently, Walker was given carte blanche to fill a small space in the Lila Acheson Wallace Wing with a selection of her own work, and pieces from the museum's collection. The result is an acute examination of the African American experience in antebellum America and its repercussions. Given enough space - literally and figuratively - to roam freely through the waters of this painful period and its visual interpretations, Walker did something truly unusual; she created an exhibit that will surprise, dishearten, entertain, horrify and astound viewers, from start to finish.

Walker's own pieces are surrounded by many rarely exhibited works from the Met's holdings. But, as representations of Walker's inspirations, they are important source material. Upon entering what seems to be a higgledy-piggledy hodgepodge of images, viewers may wonder at Walker's approach. Since this is Kara Walker, though, there is an astute method to the madness. The cluttered, pieced-together quality of the exhibit mirrors how art was shown during the 19th century. Typically, displays were densely hung, with little or no distinction between the artists shown. Walker's art is flanked by her sources, but visually she is presented as an artist among her historical colleagues.

Another interesting linkage meets viewers at the threshold. Reading the show's introductory wall text, they will learn that the catalyst for 'Kara Walker at the Met: After the Deluge' was Hurricane Katrina, the immediate responses to the tragedy and subsequent reverberations in public consciousness. For Walker, it is the stories behind the official story of the hurricane - the places where racial prejudice emerge - that haunt her, and provided a bridge for this exhibition. In an artist's statement, she says, 'I've heard harrowing anecdotes of survival and humorous tales of rancid refrigerators. And always, at the end of these tales, reported on the news, in newspapers, and by word of mouth, always there is a puddle - a murky, unnavigable space that is overcrowded with intangibles: shame, remorse, vanity, morbidity, silence'. How, then, is this recent tragedy connected to the tragic legacy of racial prejudice and slavery, and why is it part of Walker's iconography?

The image of water, the main character in the drama of Hurricane Katrina, is apparent in many pieces here and functions as a connection for disparate thoughts, emotions and observations. Water is fluid: strong and flexible, it can cause great destruction and withstand great challenges. In Eastern spiritual traditions, the strength and fluidity of water is revered. A rock may crumble, a tree may fall, but water will become one with the wave. Water can also flush out hidden debris, and clear out the dirt that soils personal and collective histories. Like all tragedies, Katrina brought people together, and sparked moving public displays of emotion; but there is, in Walker's terminology, a 'murky' area that is not politically correct. While the most blatant forms of prejudice continue to recede into the past, the shame and self-hatred, which all forms of prejudice generate, remain. Referring to what she says is a line of thinking familiar to black people ('All you have to do in this world is stay black and die'), she says, 'Instead of sitting very still, staying black and waiting to die, I have asked each [piece] to take a step beyond its own borders to connect a series of thoughts together related to fluidity and the failure of containment'.

Walker chose a Nkisi (male power figure) as a focal point for the show. As viewers enter the exhibition space, they encounter a primitive figure made of wood, iron, glass, terracotta, shells, cloth, fiber, pigment, seeds and beads. Created sometime during the 19th century in the Congo or Angola, the figure is one of numerous examples of power figures from the region. The purpose of such figures was to address the needs of a village, families or individuals. A sculptor and village priest worked together, one forming the material aspect of the figure while the other inserted magical substances into minute gaps in the wood. These substances imbued the figure with power to overcome particular obstacles. When new needs arose, the priest was called to add to the figure's spiritual inheritance.

The pieces selected from the museum's collection, most from the 19th century, offer a variety of views of the qualities of water, and of black experience from an outsider's point of view. Winslow Homer's 'Dressing for the Carnival' (oil on canvas) from 1877 shows former black slaves helping a black man dress for a Mardis Gras carnival act. The women wear the ubiquitous headscarves, and the children are barefoot. Homer's 'The Gulf Stream' (oil on canvas) from 1899 presents a black man stranded in a boat on a roiling sea, surrounded by sharks. The piece caused both criticism and praise when Homer unveiled it for the public. Many observers were concerned for the plight of the man, but others appreciated the scene's realistic drama. Later, Homer added a rescue ship to the background, relenting to public outcry.

Among other works from the museum's collection are painter and tinsmith William P Chappel's miniatures in oil of scenes of Lower Manhattan, intimate views of life on the waterfront; John Warner Barber's 'A History of the Amistad Captives: Being a Circumstantial Account of the Capture of the Spanish Schooner Amistad, by the Africans on Board; Their Voyage, and Capture near Long Island, New York; with Biographical Sketches of Each of the Surviving Africans' (sheet size of fold-out wood engravings with hand-colouring and letterpress) from 1840, which functions as one of the period's documentary accounts; and Joshua Shaw's 'The Deluge towards Its Close' (oil on canvas, ca. 1813), given to the museum by William Merritt Chase and depicting a maelstrom of dead bodies and snakes.

These pieces provide content and context, against which Walker places her own works. Her medium - the silhouette - has an interesting history. Originally, silhouettes were created for those who could not afford more expensive artwork. In the mid-18th century, the form received the name of 'silhouette' from its reputation as a cheap medium, derived from Etienne de Silhouette, a French finance minister known for his thrift. During the 19th century, the form became popular in Europe and America for portraits and scenes of upper class society. Historical sources here include pieces by Frenchman Auguste Edouart (1789-1861), one of the most skilled silhouette artists of the period. A medium that eschews surface detail and focuses on structure, silhouette art has a fragile beauty. In addition to its aesthetic appeal, the medium was used by some to proclaim racial and class superiority; by focusing on the anatomical structure of human skulls and facial features, silhouettes presented visual confirmation of circulating theories of how profiles reveal social status.

During the late 19th and early 20th centuries, the silhouette was embraced by illustrators of children's stories and fairytales, including Gordon Browne, William Heath Robinson, Arthur Rackham and Jenny Harbour. Perhaps connections between the delicate nature of the silhouette, the dream-like quality of fairytales and the rich spiritual lives of slaves can be drawn. Most likely, viewers will draw their own conclusions, and there will be many. This is the delight and gift of Walker's work.

Walker's choice of medium is radical in several ways: while many civil rights activists have worked to remove negative stereotypes of black people and their history from the public arena, Walker makes these stereotypes elements of her grand spectacles. Her silhouettes place a spotlight on notions of bestiality, violence, sexual depravity and inferiority, in the starkest format possible. Every figure in these works is 'black', by nature of her compositional method. In works such as those drawn from her 'American Primitives' series (2001), black people become the grand showmen and women who entertain their captors, donning the roles assigned to them - timid slaves, slapstick comedians, ignorant outcasts, lower than animals on the evolutionary scale - objects to use and fear.1 Highly animated, Walker's figures cavort, laugh, scream and dance across her canvas, defying at least one stereotype - that of the passive slave. Her cast of characters will not be silenced; they testify to how prejudice degrades both perpetrator and victim.

Viewers may want to read Walker's 'Text Cards', from the 'American Primitives' series, just before exiting the show. The typewriter-written messages on these 5 x 7 inch index cards provide, in words, a striking coalescence of the diverse and divergent images on view. The text card message below could serve as the exhibit's epilogue, an expression of the nightmarish legacy - rage, self-hatred and despair - of prejudice in all forms:

We are not a disease
nor endangered species,
nor threatening import,
damaging the crops
and eating the indigenous Fauna.

But
the circumstances surrounding our arrival
exhibition and sale
infected us

We are good hosts
strong, but not immune

Walker's prismatic perceptions reveal an impressive range of influences, insights and imaginative flights. Although unflinching in her portrayal of prejudice and its insidious effects, Walker is no mere critic. Viewers will detect a balanced, even impartial, intellect in this woman, whose candour is unsettling. Her mature handling of an ever-volatile subject is impressive, even more so considering her age. Born in 1969 in Stockton, California, she received a BFA from the Atlanta College of Art and an MFA from the Rhode Island School of Design. Venues that have shown her work include the Museum of Modern Art, the San Francisco Museum of Modern Art, the Solomon R Guggenheim Museum and the Whitney Museum of American Art. She received the 1997 John D and Catherine T MacArthur Foundation Achievement Award and was the United States representative to the 2002 São Paolo Biennial in Brazil. She lives in New York, where she teaches in the MFA program at Columbia University.

'Kara Walker at the Met: After the Deluge' opened at the Metropolitan Museum of Art in New York City on 21 March 2006 and runs through 30 July 2006.

Footnotes
1. In an interview, Walker stated, 'The silhouette was a near-perfect solution to a complex project that I set for myself ... to try and uncover the often subtle and uncomfortable ways racism, and racist and sexist stereotypes, influence and script our everyday lives'. See: http://fmb-ebank.bancinternal.com/portal/story.asp?idstr=91319658
2. Smith R. 'An artist's murky mix of race and water at the Met'. New York Times, 25 March 2006. 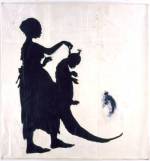 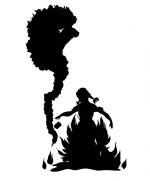