Zuzanna Czebatul: ‘People have to talk and dance with each other’

Zuzanna Czebatul: ‘People have to talk and dance with each other’

The artist talks about tigers, tarot cards, the vast carpet she made for this year’s Art Cologne and what it means to be the hired critic 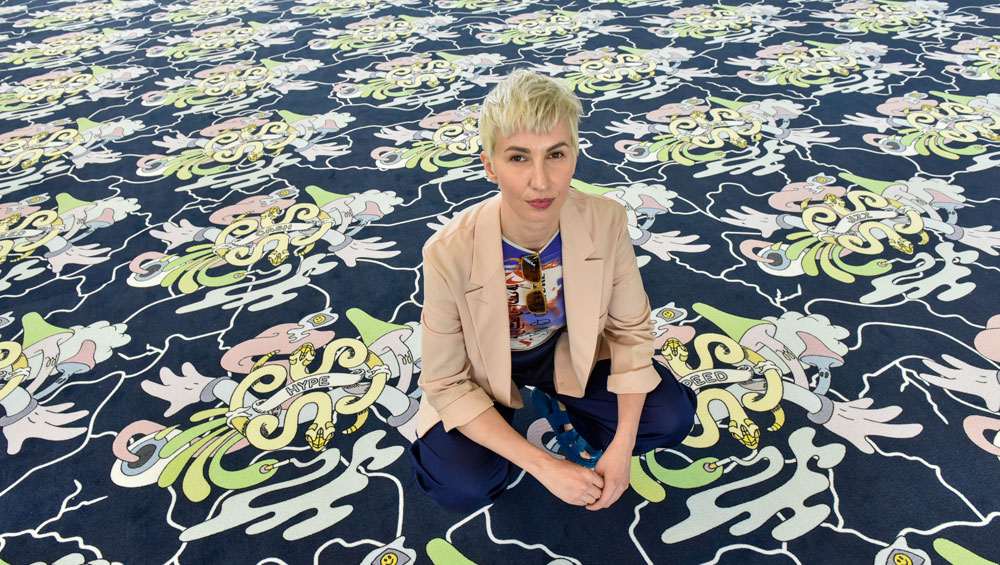 At the opening of this year’s Art Cologne on 19 April, the 1,800 sq metre entrance hall of the Koelnmesse trade centre was bedecked with an artwork – a carpet made by Zuzanna Czebatul (b1986) that stretched from wall to wall. Visitors, who numbered 58,000 by the time the four-day fair closed, glided across its repeated, trippy motif: a cartoon eyeball spouting a lolling tongue, two yellow snakes entwined around a banner, and a cigarette leaking smoke on to the pile. Based on the hypnotic design of casino carpets, Higher Than the Sun (2018) was an irreverent appraisal of the art fair. Art Cologne hosts 200 galleries, all sporting their wares in a shopping mall that is thinly disguised as a cultural event. Money changes hands as fast as poker chips: Berlin’s Galerie Aurel Scheibler quickly sold an Alice Neel sold for a six-figure sum.

When I meet Czebatul at the opening day of the fair, she is wearing a beige suit jacket, a rock band T-shirt and a pair of Klein-blue jelly shoes. We cruise across the carpet and then escape into the sun. Sitting beneath a small birch tree, we talk about tigers, tarot cards, and what it means to be the hired critic.

Izabella Scott: Your carpet fills the entire entrance hall, which is 1,800 sq metres. I think we can safely say it is the biggest work in the fair.

Zuzanna Czebatul: It’s the biggest work of my life! I exhibited a smaller version of the carpet as part of A Fruity Mechanical Treat (2016) at Schmidt & Handrup in Cologne two years ago, when I turned the gallery into a dystopian lounge. The same carpet covered the floor, but the emblems were smaller. This time, Higher Than the Sun (2018) includes the same words, such as HYPE, CASH, MEGA, and it still takes on the visual tropes of club culture, but this time I had the chance to expand it. On both occasions, I was thinking about casino carpets and the hypnotic designs that keep gamblers awake – and spending. 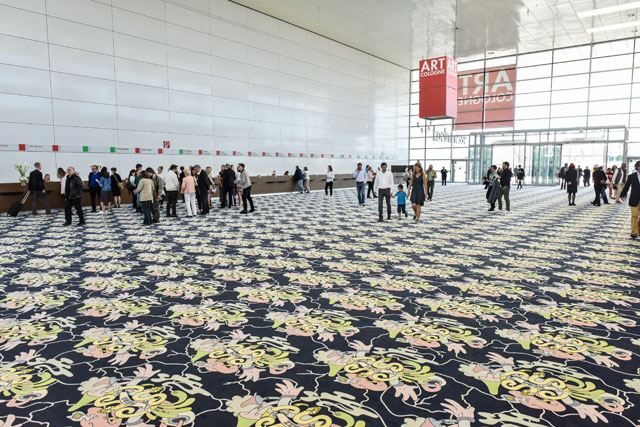 IS: Casino architecture is famous for its psychological tricks to stimulate spending – the lack of daylight and clocks, the certain kind of hypnotic music, and other architectural prompts that entice you to surrender, to lose control.

ZC: The whole idea – the windowless, maze-like spaces of the casino – is to keep you playing. Some friends of mine related an excessive trip to Las Vegas, an elongated group binge, and they explained to me that the only moment they realised they were tired was at Siegfried & Roy, a famous magic show. They all fell asleep during the performance. They later discovered that Siegfried & Roy are the only entertainment that doesn’t pump oxygen into the air – because they perform with white tigers, and the tigers can’t handle the extra oxygen. They go crazy.

IS: This practice of pumping oxygen secretly into the air – it’s a perfect symbol of power as diffuse, or what Paul B Preciado calls “the pharmaco-pornographic era”, where pornography, capitalism and the pharmaceutical industry combine to try and control us. We are breathing in a kind of power or behaviour – secreting it in our pores.

ZC: Casinos are the Disneyland of manipulation; they know all the tricks. The carpets that I’m influenced by have trippy designs on them. It’s a detail that not only affects the mindset of gamblers, but also has another simple function: if your chips fall to the floor, it’s almost impossible to find them again. Only the waiters and other staff know how to look.

IS: Where do you stand in all of this? What’s your role?

ZC: I’ve spent the past week doing a takeover of Art Cologne’s Instagram with sequences of sliding images. Each sequence is a story about typical figures in the artworld: the collector, gallerist, fair director, curator, critic and artist. The illustrations are comic strips with the humour of teenage magazines, and the stories show up the absurdity of the art world. Everyone has their own little tragedy going on – the absurd working conditions, the absurd money (what some people might call the “cash flow diversity problem”). And in every story, the problems are solved by drug-taking – which is intentionally bad taste. Of course, I had to include myself, too; a self-portrait of the artist reflecting on her position in all of this … Ultimately, I’m thinking of the art market as a drug trip, and the anxiety and fear and stress and joy we’re all caught up in, as we all try to negotiate this precarious, inviting, difficult, shifting market. We’re all culpable, we’re all seduced, we’re all part of this bubble. 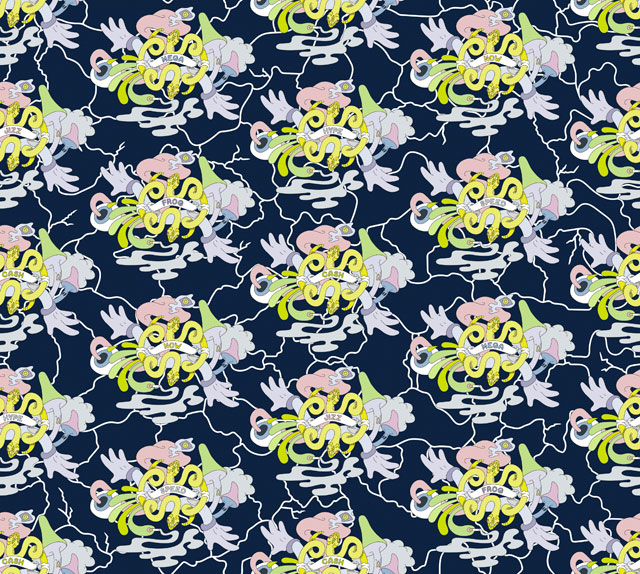 IS: Art Cologne commissioned the carpet and, in some ways, it commissioned you to critique the fair. Which probably gives the fair more publicity and more kudos, and allows it to own the critique. Does this trouble you? How do you navigate it?

ZC: Part of me hopes that the carpet has an effect on the hundreds of people who will walk across it to enter the fair – that it will stimulate the awareness that we all participate in the market, at whatever level. But who knows? Mostly, I’ve thought about what happens to this carpet when the fair ends. When I was preparing the work, I had a conflict of conscience when I realised that after five days, 3.5 tonnes of carpet, which cost €40,000 to manufacture, would be tossed into the bin. It seemed insane. There is a secondhand market for fair carpets – they are often sold to Russia – but the design is too loud. The only way to deal with it, I decided – and to combat the problem we spoke of, where you are hired to critique something and possibly only add to its value – is to make sure there is an immediate effect of the critique, beyond the fair bubble. Here was my solution: on Sunday afternoon, when the fair closes, a carpet handler will cut out each emblem into single tiles, and they will be put on sale, an edition of 100 or 200 – it’s not yet decided – at €50 each, which is a nominal sum. The money from the sales will be donated to Deutsche Krebshilfe [German Cancer Aid].

IS: How was the carpet manufactured?

ZC: This is actually a nice story. For the previous show, in 2016, I contacted a local carpet company, and it agreed to sponsor me. It only billed us for the production costs – nothing more – it was really an act of kindness. So, two years later, I called the same company to say: it’s me again, the carpet girl, and this time I have a job for you, and I can pay you – well. It was the biggest job it has had for a while. So, you give and you receive – I like the way it happened.

ZC: In the middle of the motif are two snakes, the oldest image of seduction. I see a direct analogy between sexuality and power, in the way that value is constructed within capitalism. There is something almost pornographic in the art fair, in its excess of sight. And a come-shot is kind of like a big purchase.

IS: Did you grow up in Germany?

ZC: My parents moved here from Poland when I was five, so I feel somewhere between nations. Polish people might like to claim me as Polish; Germans have a bit of a question mark over me. I don’t have an answer, but I do know that my interest in the arts came from being drawn towards a border-shifting space. In its best incarnation, the artworld is a fluid and open-minded sector. When my parents moved to Germany in the early 90s, they had the status of illegal immigrants. My mother worked as cleaner and my dad as a cook, but without papers. I remember the police would come knocking at our door. I quickly learned what it meant to have a different status. The reason we got permission to stay is because, as a last attempt, my parents’ friends collected signatures from all my classmates at school, who signed a petition to say they wanted me to stay. So, at the age of nine, I witnessed the students in my class deciding if I could stay in my home or not. It was a big lesson.

IS: You are being represented at the fair by Piktogram, a gallery from Warsaw, and I’m thinking back to your solo show Ellipsism in 2016, and the faux-marble works you make from concrete. Later this month, you have a new set of these works showing at Decad in Berlin. They are elliptical surfaces, full of symbols that are sometimes difficult to decode. Do you have particular sources for these symbols?

ZC: I’ve always been interested in marble, and the way marble is so tied to power. It has history, heritage and weight as the material used to build embassies and institutions, and there are obvious hierarchies between high and low materials that I like to question. I use faux-marble, which is made out of concrete. It’s a formula that was gifted to me from a Russian materials engineer I met. At the time, I was working obsessively with concrete, and he gave me a chemical formula. It’s concrete that looks like marble, that I can tint and adjust. It’s obviously much cheaper than marble, too, so I can play around. My technique is simple: I pour the formula on to Plexiglas, and then adapt the surface. For Ellipsism, I made eight concrete pieces, and I was working in symbols of love and fertility, reclining women and pomegranate trees – classic symbols from the ancient world. The faux-marble is coloured, and I draw on the Plexiglas with silicon first, and then pour each field individually.

IS: There is something talismanic about the images – they remind me of tarot cards, perhaps in the way the symbols are so general.

ZC: The new concrete works, which will be showing at Decad this month, are all based on current political events that I’ve been following, and I think of them as fortune cookies. They offer a kind of prediction, but it’s open to so much interpretation. For example, one piece reflects on the debate about abortion rights in Poland. You can make out a woman sleeping under a pomegranate tree, and there is an axe beside her. It might be a scene of independence, or decision-making – but the narrative is unresolved. Like other artists I know, I try to be politically engaged. It starts with us, as artists, as thinkers, to try and use our influence in the right way – to debunk stereotypes, to get people thinking, to keep having conversations. People have to talk and dance with each other. This is what rave culture taught me: people come together from all different places; they don’t question each other; they come for the music.

• Zuzanna Czebatul’s work is included in A Hermeneutic Network, which is at Decad, Berlin, until 23 June 2018. 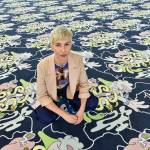