In her works on paper and installations, the artist Zarina, who left her birthplace in India more than 50 years ago, explores the idea of home while living elsewhere

Home has meant the world to artist Zarina Hashmi, ever since she left her native India in the late 1950s and travelled the world with her diplomat husband. The artist, who prefers to be called by her first name, lived in Asia and Europe before eventually settling in the United States in the mid-70s. Zarina made art about home in the many places she visited. It is through displacement that the idea of home has become central to her art, and she embodies it in varying degrees of abstraction, working with paper and sculpture, her two preferred media and modes of address. The exhibition Zarina: Descending Darkness, on view at Luhring Augustine and comprising mostly works on paper and one large sculptural installation, is a meditation on a lifelong journey of moving away from, and searching for, a home. It has a symbolic meaning codified in the black-and-gold colour scheme, prevalent in the works on display, in which darkness refers to a search for God, and gold symbolises divine light through the concept of noor, developed by the Sufi branch of Islam.1

Because of the exhibition’s spiritualised charge, the gallery space resembles a temple in which art assumes not only aesthetic, but also religious dimensions. Much of the grandeur associated with a place of worship comes from a hanging sculpture, DescendingDarkness (2013), located in the central room of the gallery. Composed of 111 bulbs in three progressively diminishing rings arranged in the shape of a chandelier, the sculpture epitomises the exhibition’s uncanny tension between familiar and unfamiliar, what we see and what we know, art and religion. Contrary to our commonsense practical expectations, the “light” bulbs hanging around the perimeter of the chandelier do not emit light, but reflect and even absorb it because they are made of polished black marble. The astounding and slightly terrifying effect of this work is a tribute to a force of material that can transform a common object into a mysterious thing. This installation sets the tone for the entire exhibition.

The other works on view are also about common things – home, politics, travel – but they also reveal the mystery of the everyday, because they are transformed by their material and by language, which the artist uses as an integral element. The striking effect of Zarina’s creations comes from her fusing of the expected and the unfamiliar in the composition of the work and the setting in which it is displayed. Monumentality of the central installation notwithstanding, the rest of the exhibition is composed of small and exquisite prints and works on paper that attest to the artist’s love and intimate knowledge of paper.

Zarina chose paper as her medium early on, even before she started making art. Paper has been used in traditional miniature painting in India since the Mughal empire in the 16th and 17th centuries, so it was familiar to her from her upbringing; the artist’s itinerant lifestyle has also encouraged the use of a material that was easily transportable. Its thinness, fragility, and organic nature reminded her of human skin. Paper like Skin,the largest exhibition of Zarina’s career, which originated in the Hammer Museum in Los Angeles two years ago and travelled to the Guggenheim in New York and the Art Institute in Chicago last year, examined her relationship with paper in great detail. In the mid-60s, Zarina was apprentice to a famed British printmaker, Stanley William Hayter (1901-88), in his Parisian atelier. From him, she learned to work with paper’s varying textures and qualities; she also became more confident as an artist, finding ways to explore and reveal particular characteristics of each specific type and piece of this material. Through her travels, she learned about the different treatments of paper in traditional cultures from her native India to Japan. It was in Japan that she perfected her woodcut technique, following the teachings of Shikō Munakata (1903-75), an artist who insisted on carving his own printing blocks. For Zarina, the process of carving was as important as printing and drawing because she was attentive to the way wood would leave its trace on the paper. She even emphasised carving over drawing, because she wanted to highlight expressive possibilities of wood: “I carve the block, then I bring the light in.”2

In several woodcuts on display, light functions as a delineator of meaning, separating things from one another, making them different and endowing them with meaning. In Fold in the Sky (2014), for example, the sheet of paper is divided vertically into two equal parts by a multitude of white dots that crowd on its left side while leaving the right side pitch black. The dots multiply toward the centre, making a thick speckled line with occasional “bursts” of spotted matter spilling into the neighbouring darkness. Because of the title, we imagine the dark being a night sky and the dots as stars, planets and other cosmic matter. The title, however, explains nothing, but gives us a poetic pivot around which we, in our turn, can “fold” our imagination.

In Abyss (2013), another print in the same room, a jagged line cuts diagonally across the surface of darkness, lightness seeping through hatching connecting two borders of a precipice. The title suggests a fissure of sorts, an irreversible disaster, or death. Research on the iconography of this print reveals that the image derives from the print Dividing Line, made in 2001, and refers to the outline of the border between India and Pakistan after their partition in 1947.3 Zarina’s family, which was Muslim, left India and moved to Pakistan in the late 60s. Although she was not living with them, this move was traumatic for her, because she, along with millions of other uprooted people, could not return to the place where she was born and raised, and find it the same. Knowing this story makes us think that perhaps the entire exhibition is a poem about the artist’s life told in images, where the prints are disassembled pages of a sacred book.

The back room of the gallery holds the “altar” of Zarina’s temple, a uniform but also motley assemblage of 50 collages put together in the form of a rectangular stela in an otherwise empty space. The collages resemble each other in their subject matter – all featuring miniature houses – and in their shape and size – squares of around 23cm (9in). They vary in the types of houses they represent: although most have a triangular roof perched on a rectangle, each is different from the next in the way they are made – from gold foil, black paper, or seemingly infinite combinations of the two. There is also a minuscule variation in the geometric arrangement of the works: five columns of 10 collages looking vertically, but the two columns on the right are shifted upward an inch or so, making the entire arrangement appear slightly off-balance. This variation in appearance and breaking of regularity makes us aware of a constructed, conditioned nature of our perception. Zarina’s homage to a place we rest is a poignant monument to impermanence. 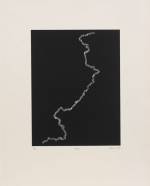 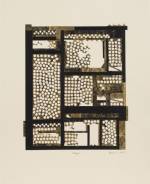 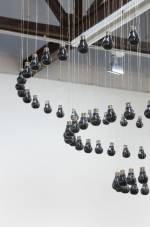 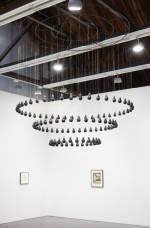 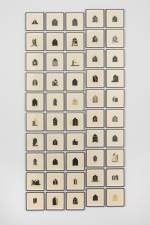 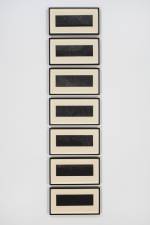