What is lost is lost forever, says Tillmans in this politically charged exhibition, which includes posters imploring British voters to stay in Europe. With the show straddling the date of the UK’s referendum on 23 June, it will be interesting to see what viewers make of it 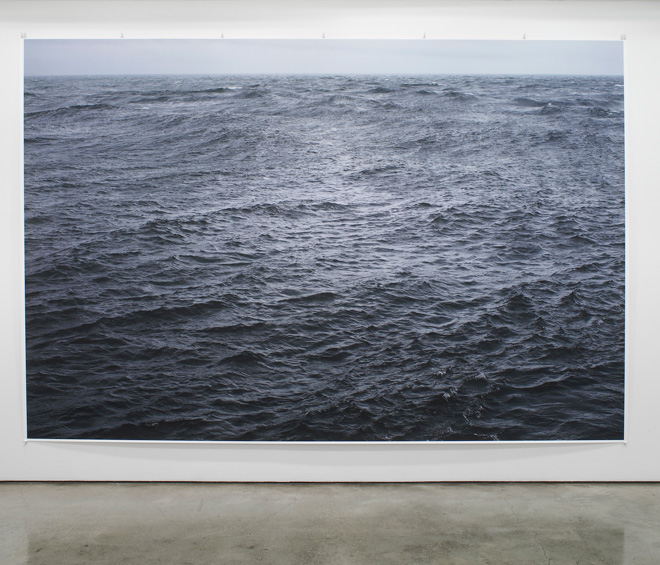 It has often been said that Wolfgang Tillmans’ work exposes the quotidian, the unremarkable, that it is purely observational: nothing could be further from the truth in the artist’s eighth exhibition at Maureen Paley. On entering the gallery, visitors will immediately encounter a loud collage of pro-EU posters, emblazoned with a broad range of inspirational (and wryly funny) quotes: “My ideal world is, we’re there, we’re in the EU, trying to make it better” (Boris Johnson, Der Spiegel, 12/08/15). These are not Tillmans’ own political posters (which are found in the exterior section of the gallery, bookending the exhibition), but are selected from EU-UK, “a lo-fi, high-impact, artist-run Remain campaign”, and Britain Stronger in Europe, both campaigning in advance of the UK’s 23 June referendum on its EU membership.

Tillmans has become prominently involved in the Remain campaign over the past few months: finding its efforts “lame and lacking in passion”, he has embarked on a mission to inform young people of the stakes at play. To that end, he has designed a series of posters and T-shirts imploring voters to “Say you’re in if you’re in”, reminding them portentously: “What is lost is lost forever.”

Tillmans was born in Remscheid, Germany, in 1968, and lives and works in London and Berlin. He has exhibited across the world, from Liverpool to Lima, and the Tate Modern will present a major survey of his work in 2017. Having become the first photographer, and the first non-British national, to win the Turner Prize in 2000, he has found himself an artist with establishment backing and significant influence. Tillmans remarks on his website that, as a German who has lived in London for an extensive period of his career, he sees himself “as a product of the European postwar history of reconciliation, peace and exchange”, a postwar history that he sees an urgent need to defend and extend.

In the ground floor gallery, one’s attention is immediately drawn to the exhibition’s largest work, The State We’re In, A (2015), a vast print showing the turbulent, metallic waters of the Atlantic Ocean, at the intersection of various international timelines and international borders. “No man is an island, no country by itself,” declare Tillmans’ posters: this message is transplanted into the exhibition, with works such as Fire Island (2015) and Kleine Welle (2015) depicting coastal vistas. The camera looks out to the horizon, implicitly questioning from where exactly one forges a unique and discrete sovereign identity within such universal landscapes.

In Wako Book 5 / Border Installation, Tillmans displays a collection of smaller photographs, loosely associated with the concept of borders: sterile airport checks, customs halls, a vandalised 2011 Spanish ATM. A sign states that “aviation security is no laughing matter”, while in an adjacent photograph a black cleaner smiles at a white child. An airport sign giving information on cross-border fees points out of the frame to an adjacent photograph of a strange human form underwater, contorted by refraction. A lone departure terminal sign asks: “What is a liquid?” The grouping of these photographs invites ironic detachment, belittling our (inter)national obsession with tightly defined frontiers enforced with the threat of violence.

Upstairs stands the installation I refuse to be your enemy, 2 (2016). This grouping of plywood tables constitutes the latest instalment of Tillmans’ Truth Study Center series (started in 2005). The tables are of varying heights and arranged at right angles; on them is placed office paper of varying colours and sizes, each conforming to a different national regulatory specification. In 2005, Tillmans exhibited at Maureen Paley an early version of Truth Study Center, with imagery gesturing to the exercise of power under the guise of capitalism, Catholicism and Islamic fundamentalism. While his disposal here of such explicit imagery is not a new development – the artist previously exhibited a similar installation titled I refuse to be your enemy at David Zwirner in New York last year – it takes on more potent meanings in this politically charged exhibition, gesturing to a diversity that does not overwrite an underlying commonality.

The office paper on these tables resembles colour swatches for the works on display on the walls of the upstairs gallery: almost all taken from planes, they are small, understated photographs, silky smooth compositions of grey-blue clouds in low light. Amsterdam to Lima’s sweeping exposure of the Atlantic Ocean, flat and calm from 35,000 feet, gestures to The State We’re In, revelling in the ease with which borders are dissolved by sea and sky.

But it is not all sublime and transcendent; more familiar environments are on show too. In Palm tree, sun burst (2015), an office forms the backdrop to a spherical palm tree bathed in orange light. There are empty, twilit studios, a grey printers’ cabinet adorned with a bright yellow parasol, a darkened room with multiple monitors, each depicting the sun viewed through different analytical programs. These settings are place-less: within these anonymous locations lies a unity of experience that transcends political and arcane divisions.

On his website, Tillmans writes a bemused defence of Brussels bureaucracy, arguing that its machinations actually do a rather good job, considering the enormity of the task at hand. At Maureen Paley he has us peer into the inner workings of things: we see disembodied industrial machinery, decontextualised to the point of geometrical abstraction and chaotic wiring. One of the larger works on show is titled Open Heart Bypass (2015), depicting luminous, disembodied red blood flowing through a delicate arrangement of hospital tubes. It is likely that one of the last photographs visitors will see is CLC 800 (2011), dismantled, a lone printer disrobed of its beige cladding and left a husk, unable to accept paper of any international denomination.

Tillmans’ photography takes us up above the planet and close up to the choppy waters of the dark Atlantic. We are shown computer analyses of our sun; we see the dark shadow of a head raised in ecstasy. We are given a bird’s-eye view of transatlantic paper regulation, while a charming and varied collection of portraits brings us back to more human scales. The oscillations in perspective in this exhibition are what make it so engaging: visitors, having been given a politicised framework to work with, are invited to form free-flowing narratives of association. The shape of those narratives will change dramatically over the course of the exhibition, which closes more than a month after the UK’s referendum. This is a collection of photographs uniquely compelling at a particular moment in geopolitical time. 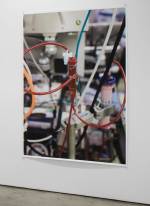