Versace at the V&A

Versace at the V&A

Versace at the V&A is the largest exhibition that the Victoria and Albert Museum, in London, has ever dedicated to one fashion designer. This massive retrospective will show Gianni Versace's unique flair for fashion and his great quest for beauty through revolutionary new techniques in textile design

The curator of the exhibition is Claire Wilcox, a curator in the V&A's Fashion and Textile Department, with special responsibility for 20th century and Contemporary dress collections. Claire Wilcox, Valerie Mendes and Chiara Buss have written the catalogue that accompanies the exhibition,'The Art and Craft of Gianni Versace. Versace's work is seen in two complimentary perspectives: Art and Craft. The book boasts a selection of nearly two hundred colour pictures and has been published in paperback.

Clothes by Versace are renowned for being glamorous, glitzy and often controversially brash. The man behind this hedonistic fashion empire was the late Gianni Versace. The fashion entrepreneur was born in Reggio di Calabria, a poor region of Italy. His mother was a perfectionist dressmaker and inspired Gianni to go into fashion design. The young Versace learnt his trade in London and Paris before moving to Milan in the 1970s, where he launched his own women's wear collection under the name, Gianni Versace Donna.

By 1979, Versace had begun work with the fashion photographer Richard Avedon. This was the beginning of a long line of fashion campaigns by Mr Avedon. 1982 was a major year for Gianni Versace that began with the launch of his innovative 'Oroton' in his collection at the Paris Opera. This metal mesh that Versace invented contradicted all of the usual properties of metal. It could be used to make delicate, shimmering evening dresses for women. It was also possible to colour and pattern the revolutionary material, as Versace often did. It could be used alone, or mixed with a variation of fabrics and patterns. Unlikely combinations included Oroton with lace, chiffon, animal skin and lace. The designer used Oroton to make slinky, figure-hugging garments that would usually require the finest silks and most delicate chiffon.

Although his revolutionary fashion design was at first criticised by the Parisian Haute Couture scene, fashion's fickle nature was soon shown when Versace's fame and recognition escalated. The industry that had at first dismissed Gianni Versace's clothes as 'tarty' and 'vulgar', in an attempt to salvage their obsession with the traditional conformities of fashion, began to welcome Versace's clothes and ideas. It became hip to be a flamboyant and passionate woman rather than a conformist 'damsel in distress.' As Elizabeth Hurley once said: 'Unlike many other designers, Versace designs clothes to celebrate the female form rather than eliminate it.' Gianni Versace had made this seductive, feisty new form of feminism flamboyantly fashionable.

Throughout the nineties, Versace remained a key figure, not only in international fashion, but also in glamour and fame internationally. You see the Versace phenomenon was not only about beautiful collections of couture clothes. A wealth of hedonistic and feminist values was woven into the dazzling silk of a Versace dress. International glamour and glitz were as important in the House of Versace as the shiniest diamante; celebrities and Princesses were valued, in the creation of an innovative collection, as much as one of Versace's dressmakers. The ideas of fame and fortune were key ingredients in the fiery cocktail that was The House of Versace.

Celebrities were, and are, quick to celebrate Mr Versace's fabulous clothes. It seems to me that the most legendary artistes and celebrities are all loyal ambassadors to Versace. Elizabeth Hurley (whose famous safety-pin dress by Versace is on show at the V&A) shot to fame when she appeared in 'that dress' with Hugh Grant to the film premiere of Four Weddings and a Funeral.

It is a distant relative of the black, slashed and safety-pinned clothing of British punk and of the body-conscious black Lycra sheath dresses of metropolitan disco and club life. While he accommodated the principle of anti-establishment slashed clothing, there was nothing untidy or raw-edged about this dress, and mundane safety pins became gilt and silver kilt pins resplendent with diamantes as well as Versace's Medusa-head emblem. The designer put his unique stamp of glamour and audacity on this design, which has become a landmark in the history of the little black dress.

The late Princess Diana expressed her independence and confidence by wearing Versace to a photo-shoot by Patrick Demarchelier.

The gown has a simple shape but the pattern is boldly geometric, with linear whorls and a dominant 'bow' motif that defined the hips. The classic mixture of pale blue and gold perfectly complimented the Princess's blonde and blue-eyed colouring

Supermodels such as Linda Evangelista, Naomi Campbell, Christy Turlington and Cindy Crawford made their name by fronting a Versace advertisement campaign in the early nineties. Other stars to celebrate their celebrity status by wearing Versace garments have included Elton John, Madonna and Joan Collins.

Gianni Versace oozed energy and glamour through his magnificent creations as a fashion designer. He sparked and represented an era that was enthusiastic to 'wear your dosh on your sleeve.' Versace produced iconic dresses to compliment iconic people. He scrapped conformity and thwarted flamboyance in favour of an open celebration of fame, sexuality, glamour and glitz, with the help of a few legendary celebrities and a flair for dressmaking. By the late nineties, Haute Couture was glowing with glamour and glitz.

Mr Versace did not only work with high fashion though. Many of his most beautiful creations were made for the stage. He designed many fabulous costumes for ballets and operas. During the early 1980s, Gianni Versace created wonderful tutus for Strauss ballets at La Scala. He proved that he was extremely versatile in his ability to design delicate ballet costumes as well as brash, seductive cocktail dresses. Some outfits that he designed for the stage were larger than life and decorated with colourful appliqués and bold patterns. They were really exaggerated versions of Versace's Haute Couture pieces, and would often have an effect on clothes that he designed for the catwalk.

Versace employed his ability as a colourist to create arresting multicoloured as well as monochromatic costumes. Capable of subdued moments, for Bejart's dance Souvenir de Leningrad he designed cream on cream with touches of silver tutus: refined exercises in texture achieved by skilful cutwork embroidery, pin tucks and scallops. With short bouffant skirts and a jeune fille aura, tutus were translated for the catwalk into sprightly dresses with tight bodices and very short bell skirts over hooped petticoats.

This innocent style on the catwalks was in total contrast to the glitzy and seductive clothes that Versace would usually produce. Gianni Versace also contrasted a number of seemingly uncomplimentary materials, patterns and colours. He would mix fabrics that had distinctly masculine connotations, such as leather and chainmail, with very feminine materials like satin, silk, lace and velvet. Leopard print would be teamed with Versace's favourite 'Wild Baroque' design of foliate volutes and architectonic roundels in simply designed dresses for an explosive unity. Gianni Versace could make the most unlikely combinations of pattern work wonderfully.

In a truly dramatic fashion, Gianni Versace died on the 15th of July 1997 in Florida. He was shot on the doorstep of his Miami mansion. The international glitterati mourned the death of this self-made icon (possibly with the exception of a few success-hungry junior designers and competitors, fashion is fickle after all) and wondered if the world could ever be quite so glitzy again. Ambassadors of brashness sighed a breath of relief when Gianni's younger sister, Donatella, stepped into the Versace throne to ensure the glamorous fashion house's survival. Madonna recently said, 'When I think of the House of Versace, of course I think of clothes and glamour. But more importantly, I think of the generosity that Donatella has shown towards me and my family. If Gianni were alive today he would be very proud of her'.

Donatella has successfully taken Versace into the 21st century, where Versace dresses continue to appear, clad to made-up Hollywood actresses, socialites and ambitious girlfriends, at glitzy film premieres and countless award ceremonies. For as long as fame and fortune are present in our hedonistic society, the House of Versace will continue to stand strong.

Versace at the V&A is a fabulous tribute to a man that has shaped couture forever. Each gold-studded sash and beaded silk dress at the exhibition is representative of all the values that Gianni Versace stood for: flamboyance, glamour, brashness and a fabulous flair for making beautifully cut clothes. The way in which the famous clothes are displayed makes the experience of seeing the creations all the more inspiring. Dramatic music and valuable film footage of past catwalk shows and Versace at work complimented the showstopping outfits tremendously. I was overwhelmed by the dresses that were indeed works of art and felt confident that Gianni Versace was surely a fabulous artist. This exhibition, at such a distinguished museum is proof that, in spite of fashion's fickle nature, Versace will long be remembered as a couture label that changed the rules of fashion forever. 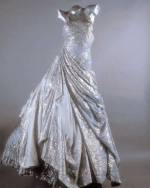 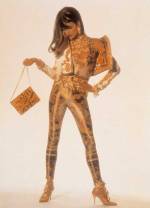 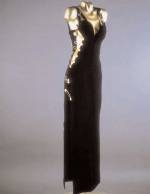 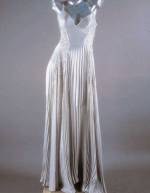