In the words of Henry Matisse, 'It seemed to me that Turner must have been the link between the academic tradition and impressionism'. This transition from Realism to Impressionism and beyond forms the backdrop of 'Turner Whistler Monet', an exhibition specifically aimed at establishing the visual and contextual connections undeniably linking JMW Turner, James McNeil Whistler and Claude Monet through a century and almost three artistic genres. 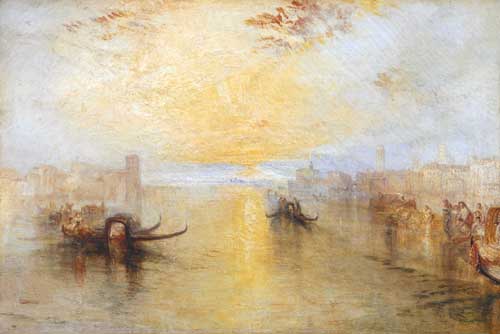 The culmination of an idea first conceived in 1988, 'Turner Whistler Monet' boasts a collection of over one hundred works from all three artists, many of which are the most popular works in their respective institutions and are rarely lent. Although comparisons between the three artists have been drawn in the past, the exhibition is unique in concentrating all three together and according to Katherine Lochnan, a Whistler scholar and senior curator of the Art Gallery of Ontario, it enables, for the first time, an exploration of their similarities in a 'sustained way'.

The exhibition is the result of a collaboration between the Art Gallery of Ontario, Tate Britain and the Musée d'Orsay in Paris and will run for about 11 months, travelling from Toronto to Paris to London, cities imperative to the influence of each artist. This artistic journey is echoed in the exhibition visually as well as geographically, the vast distances between the three countries serving to make fascinating contextual parallels, such as Monet and Whistler's studies of Waterloo Bridge, or all three artists' remarkable interpretations of San Giorgio Maggiore at sunset.

The exhibition is divided into six sections. It begins with Turner's 'legacy', compiled from his paintings and watercolours - many of which formed part of the Turner Bequest of 1856 and includes several studies of the Seine in the 1830s. The second section, 'From Realism to Impressionism', contains predominantly early works by Whistler and Monet of the Thames and the Seine. Of particular interest is Monet's famous 'Impression, Sunrise' (1872-73), the painting responsible for the very coining of the term 'Impressionism'.

The exhibition then focuses on the progression into Symbolism, primarily featuring many of Whistler's sombre 'Nocturnes' of Chelsea river views, including his notorious 'Nocturne in Black and Gold: The Falling Rocket' (1875). The exhibit is accompanied by a fascinating text detailing John Ruskin's public criticism of the work for its 'lack of finish' and the ensuing court case in which Whistler brought libel charges against Ruskin in 1878 for defamation. These events proved to be the catalyst to Whistler's artistic alliance with Monet in the mid-1880s and marked the promotion of French Impressionism in Britain.

Picture to picture and aided by sections of text, visitors are guided through the gradual shift in style. We witness the artists' simplification of painting techniques, which gave birth to a novel spontaneity in imagery and which captured the transiency of London skies during the height of the Industrial Revolution. This is particularly evident in Monet's pastel studies of the Thames, shrouded in his beloved 'fog effects ('effets de brouillard') and Whistler's dark translucent watercolours.

There follows an investigation into the relationship between art and poetry and the triumvirate formed between Whistler, Monet and the poet Stephane Mallarme, which cemented the growing artistic links between the two artists during the 1890s.

At times, large amounts of written information, featuring artistic references and quotations, clutter the walls and if the exhibition is flawed, it is in this excess of text which, given the exhibition's popularity does little to help the circulation of visitors. Deprived of the luxury of a private viewing - a necessity in order to fully appreciate the quality of the artworks - visitors are often left fighting for even a glimpse of the masterpieces on show. This was especially a problem throughout the first two sections of the exhibition showing Turner and the early works of Whistler and Monet which, in addition to being let down by poor lighting, at times took on a dynamic more akin to a gathering counting down the New Year.

Perhaps the highlight of the exhibition comes with the epilogue. Monet's startling series of four 'Houses of Parliament, sunset' (1904) has travelled from the farthest reaches of the globe and the paintings hang gloriously together, within touching distance of Turner's magnificent 'The Burning of the Houses of Lords and Commons' (1834). Next, all three artists are brought face to face against the backdrop of Venice and here, best of all; the clearest comparisons can be made between these three giants of their medium.