With his latest installation at South London Gallery, Thomas Hirschhorn’s portrayal of destruction gives us a damning glimpse of an alternative future that could easily become a reality

Several weeks ago, a group of friends and I disagreed about the credibility of comedian Russell Brand as a political commentator. I argued that in the run-up to the UK’s recent general election, he had abused an influential platform, and that his interpretation of socialism was unhelpful to the progression of democracy. My friends said that, dogmatism aside, he should be commended for the way in which he reinvigorated politics and piqued the interest of a previously disengaged demographic. To an extent, I agree, but still find myself grappling with this question: if someone roots for a cause that is flawed and arguably regressive, but reveals certain concealed truths to a portion of the populous in the process, should we see them as misguided or progressive?

This same question can be applied to Swiss artist Thomas Hirschhorn (b1957). A former member of communist graphic design collective Grapus, Hirschhorn rose to prominence in the 1990s, when he began to build the immersive sculptural installations that he continues to produce to this day. Often dedicated to, or directly referencing, lauded socialist theorists, such as Baruch Spinoza, Gilles Deleuze and Georges Bataille, Hirschhorn’s neo-Marxist structures have been exhibited at the Dia Art Foundation, New York, Palais de Tokyo, Paris, and the Institute of Modern Art, Brisbane.

It is safe to say that these installations are not attractive in a conventional sense. Unlike artists such as Yayoi Kusama and Chiharu Shiota who produce work on a similar scale, Hirschhorn does not aim to transport his audience to a world of fantasy. Instead, he moves to elicit a revaluation of their everyday environment, in part through the use of low-grade materials such as cardboard, packing tape and aluminium foil – materials seen by the artist as “universal, economic [and] inclusive”.

In-Between at the South London Gallery, a new site-specific work and Hirschhorn’s first major solo show in London in many years, is no exception. Occupying the entire central room of the gallery, the single work is rooted in a quote from Italian Marxist theorist and politician Antonio Gramsci: “Destruction is difficult. It is as difficult as creation.” A direct successor to works such as Höhere Gewalt (2014), Break-Through (2013) and Concordia, Concordia (2012), all of which explored the aesthetic of ruins, In-Betweenis a dissection of 21st-century infrastructure. From wall to wall and floor to ceiling, ventilation pipes and bunches of red wire hang limp like bloodless veins; sinks and toilets sit forgotten in the corners of derelict rooms; and strips of parcel tape cluster and bunch, gradually losing the ability to stick. The work depicts a fractured cross-section of the reality within which we embed ourselves, and while it is closer to the surreal than may be ordinary, the image is not beyond the realms of possibility. This is what it would look like if our over-synthetic, overdeveloped world all fell down.

Despite the impressive scale and construction of In-Between,there are issues. While the placement of the installation within the ornate central hall of the South London Gallery can be seen as subversive, the elegant cornice and skylight that peek through the tattered canopy of Hirschhorn’s derelict scene hint at a superficiality, one that risks undermining the “for the people” political commentary. Following this, a broader question can also be asked of the value of Hirschhorn’s raw, universal structures. Despite his open rallying against the contemporary bourgeoisie and his attempts to reinvigorate the subjugated – his 2013 work Gramsci Monument was installed in the Bronx, New York, with the help of residents at Forest Houses, a housing authority development – his previous works of similar low-grade materials have sold for an estimated £70,000. Perhaps this is pedantic, but for an artist who has devoted himself to a certain political philosophy for so long – and has won numerous plaudits in the process – it would be dishonest and naive to ignore these inconsistences completely.

But these areas of tension are not unexpected. Making such theoretically founded work in an art world that often seems estranged from the once fertile plains of philosophy and sociology, Hirschhorn’s installations can be seen as counter-cultural. With many of the seminal papers having been written in a different era – with little reference to the status of art – it is no surprise that his 21st-century reimaginings raise issues that were not previously pertinent. As Hirschhorn himself admits, with it being so contrary in aesthetic to the progressive and direct drives of modernity: “Creating destruction is difficult.” It requires the artist to actively regress: to deconstruct the secure, to revolt against the existent, and, most difficult of all, to add nothing whatsoever.

Here, we can return to that opening question of whether a vocal yet flawed political advocate is more beneficial than no advocate at all. While Hirschhorn’s work peddles a neo-Marxist theory that is arguably inapplicable to a contemporary society that is inextricably linked to capitalism, and while as a result of its direct, polemical approach, In-Betweenfaces a crisis of identity that may be irresolvable, ultimately it is a striking and successful work. The premonitory depiction of a broken world – of ourbroken world – achieves exactly what Hirschhorn wants it to: it “shows what the materials of making really are”, “makes the hidden connections visible”, and leads us to consider the unseen fragility that pockmarks the beating heart of society. Like the opinions of the political commentator that my friends continue to support, while the over-riding message here may no longer be wholly rational, its very presence deems it beneficial in the sense that it acts as a reminder. It reminds us that we need to think; that if we continue to build on what we build, we will lose sight of the insecure substructure that lies below and become susceptible to the very same earthquake that ripped through Hirschhorn’s In-Between. 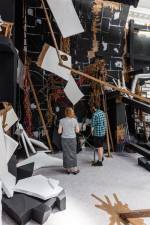