The world is yours, as well as ours

The world is yours, as well as ours

This exhibition takes the visitor on a whirlwind tour of some of China’s most recent abstract work, ranging from figurative landscapes to digital glitches to the eternity of the circle 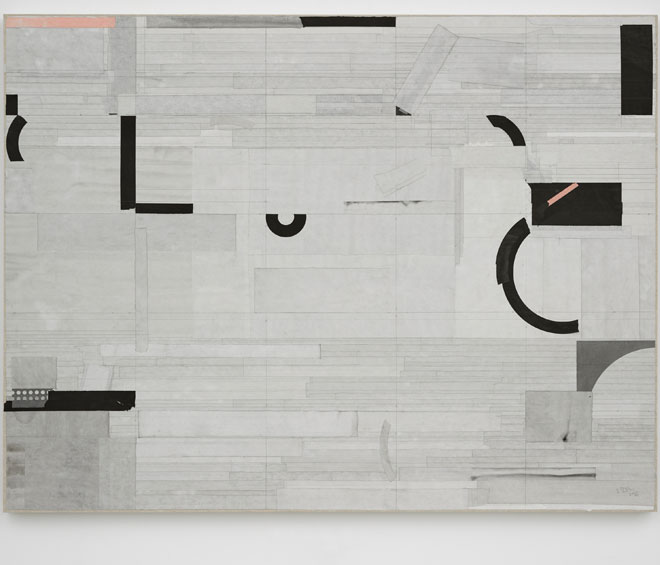 “The world is yours, as well as ours,” said Mao Zedong, in a talk to a group of Chinese students in Moscow in 1957, “but in the last analysis, it is yours.” This exhibition takes its title from two paintings on display by Jiang Zhi. With that last phrase dropped, the title is left ambiguous; the world in question at White Cube Mason’s Yard is that of contemporary Chinese abstract painting, and the questions of who and what defines and owns this world are up in the air.

Chinese abstraction developed in relative isolation from the west, and has a rich history within Chinese aesthetics. The characters that make up the Chinese writing system are themselves often simplified versions of illustrations or hieroglyphs; the practice of traditional calligraphy was revered as artistic expression long before painting, and often involved the artist injecting emotional movement and energy into abstract forms. Other key influences on Chinese abstraction as it exists today are the long-term prevalence of visually minimalist Taoist art, and the Cultural Revolution, against which artists have framed abstraction as rebellion.

On show at White Cube are works from nine artists from across China: from Beijing to Wuhan, Qingdao to Shanghai. Visitors are greeted on entering the gallery by The world is yours, as well as ours – Display 24 (2015-2016) by Jiang Zhi, with its companion work The world is yours, as well as ours – Display 25 (2015-2016). These works take inspiration from a computer glitch where the active window becomes bugged and leaves continual traces of itself wherever one drags it. Here, the artist has elaborated on this error – with which most computer users will have played at some point – to create complex cascading patterns, resembling a cloudscape or a blue flame. The simple iteration of flat rectangular panes in varying sizes imbues the paintings, painstakingly executed with oil on canvas, with a mesmerising three-dimensionality.

Nearby are works of an even more intricate nature. Two pieces by Liu Wentao, both untitled (2014, 2015), appear from a distance to be shimmering experimentations in shading and gradient. However, as one approaches, it becomes clear that these works are, in fact, made up of thousands of pencilled lines merging into a vast “net”, increasing in density until the canvas beneath is reduced to tiny pricks of white. These paintings reward close observation, and it is hard not to admire – and be intimidated by – the artist’s fastidious execution. The artwork dated 2015 is particularly eye-catching: the density of the lines recedes in mathematical sequence towards the centre of the canvas, leaving a narrowing set of ever-brighter squares. The canvas as a whole is reminiscent of staring down an elevator shaft, or observing the refractions of a distant light source.

Yu Youhan is often considered to be the father of abstract painting in China, and five of his works are on show here. As a painter, Yu has a wide artistic repertoire, spanning from pop pastiche to collage, but here we are shown near-monochromatic works of a similar style, despite ranging from 1985 to 2013. Abstract 1985-5 (1985) is part of Yu’s “circle series”, and his later work on show demonstrates his continued use of the circle in later years. As Yu remarked in 2014: “My circle represents the universe. It is as if I am observing the world through a magnifier. In China, we have a proverb that says you can imagine the appearance of a leopard by observing one of its spots.” These are mysterious and eerie paintings, whose abstraction co-exists with more imaginative, nearly figurative details: dribbling rivulets of near-black paint suggest trees, blood cells, or a face in water.

Zhou Li’s paintings also take inspiration from nature, resolving recognisable landscapes into abstraction. Mountain Enjoyment (2015) and Lines (2016) are both mixed-media works, with irregular looping shapes superimposed over pale blue washes of ink. Parts of the paintings have been papered over, revealing deeper colours underneath. This tight layering of different elements is also seen in three collages by Liang Quan. Liang has segmented the canvas into rectangles of different sizes and in various shades of grey and black, through which he has threaded more irregular shapes and colours. These works are reminiscent of an architect’s table, minute sets of lines delineated with precision, the ghostly shapes of rulers and protractors left behind.

Qian Jiahua and Qin Yifeng offer abstraction in a more minimalist mode. The two paintings by Qian are understated optical illusions: squares and rectangles with brightly painted borders lean outwards to playfully suggest, like several other artworks on show here, the addition of a third dimension. The three works on show by Qin Yifeng, Line Field 562 (2015), Line Field 570 (2016) and Line Field 571 (2016), are all works of acrylic on linen, where vertical dashes of white paint have been smudged into meandering patterns. On close inspection, the linen gives these paintings an organic, earthy quality.

One perceives that many of these works are playing with the idea of abstract painting as a “flat” medium through their layering of different elements, or their detailed shading to suggest three-dimensionality. Two works by Su Xiaobai confirm this perception, bulging heavily away from the wall, more sculpture than painting. The artist has used ancient techniques of Chinese lacquer work, starting from a wooden base and building up layers of oil and lacquer to create a dense, creamy surface. The smoothness of this surface serves to accentuate the cracks and textures of the wood underneath.

Left to hang centre stage in the downstairs gallery, as if a palette-cleanser for all this monochrome minimalism, is a large ink wash artwork by Tang Guo. The work, Luo River (2015), blazes with oranges, limes and teals. Like the other works on show, this piece evokes a natural landscape while remaining abstract: the artist has left the final resting orientation of the ink to chance, the result a detailed landscape of islets and coves.

Visitors to White Cube Mason’s Yard will be getting a whirlwind tour of some of the most recent abstract work to come out of China; the exhibition, which can at times seem claustrophobic, jumps between a wide variety of approaches to painting. This pluralism can be disorientating, but that feels part of the point. With artists young and old tackling subject matter ranging from figurative landscapes to digital glitches to the eternity of the circle, it is clear that the world of abstraction is thriving in contemporary Chinese art. 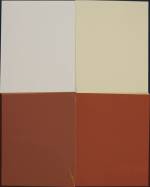 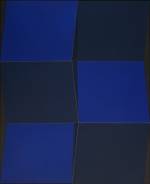 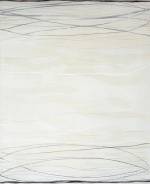 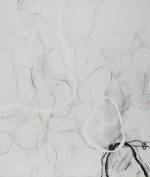