The Sacred Made Real

Spanish art of the mid-17th century achieved a level of naturalism, which in some respects was quite unprecedented. The manifestation of this impulse in painting, through the work of artists like Velasquez and Zurbarán, is already widely known outside Spain. What is less well known is the fact that, in parallel with this development in painting, there emerged a tradition of polychrome sculpture, which was so lifelike in its hyperrealism that it constitutes a kind of sculptural trompe l’oeil.

The fact that this sculptural tradition is less well known outside Spain than the corresponding school of painting is easily explained. Paintings are more portable, and soon moved into the circulation system of the international art market; sculptures, in addition to being more difficult to transport, were more often produced and destined for a specific ecclesiastical location. Spanish painting of the period also had a lively tradition of secular subject matter, which is absent in the sculpture of the period.

However, in addition to these considerations, it must be admitted that whereas the impressionistic naturalism of much of the painting harmonised with parallel developments elsewhere in Europe, such as the Low Countries, the tradition of lifelike (and often life-size) polychrome sculpture was likely to be completely alien to the tastes of many countries outside Spain. Certainly, in the Protestant north such sculptures would have been rejected as repulsive effigies and potentially idolatrous. Even today, many visitors to the current exhibition will, I am sure, feel a distinct sense of the macabre and a frisson of unease when confronted with some of the exhibits.

The Spanish appetite for lifelike polychrome sculptures of religious subjects must be seen in the context of the profound religious schism which divided Europe in the seventeenth century, a schism which, in simplistic terms, divided the north and east from the south and the west. While the Protestant states, including Britain, the Low Countries and Northern Germany, moved ever further from the hegemony of the Catholic South and the Church of Rome, the Counter-Reformation in the south, spearheaded by the Jesuits, demanded a religious iconology which laid dramatic emphasis upon the corporeal reality of Christ, the Virgin and the Saints, and in particular the suffering which was seen as a necessary part of the redemption of the Christian soul. While the walls and spaces of churches in the north became ever more bare and austere, even to removing statuary and whitewashing over existing paintings, the churches of the Catholic south were increasingly adorned with images and objects of ever greater naturalism, complexity and emotional impact.

Whereas the painters represented in this exhibition will almost all be known to the contemporary public, the names of the sculptors, such as Cano, Montañés and de Mesa, will probably be unknown outside Spain. A paradigm example of the sculptor’s art is the Head of Saint John the Baptist by de Mesa. This is a life-size replica of a freshly decapitated head and was possibly modelled on the head of an executed criminal. The anatomical details of the severed neck are faithfully reproduced, showing the trachea, oesophagus and spine, surrounded by congealed blood. The half open mouth reveals the precisely modelled teeth. The colour and texture of the skin and hair are meticulously rendered, making the object easy to mistake for the real thing. For such subjects, teeth were often carved from ivory and eyes made of glass. The reaction of the contemporary spectator is torn between a sense of shock at the macabre and a voyeuristic desire to examine the detail. It is unlikely that someone outside the cultural domain of the historic Church of Rome would feel the sentiments which it was intended to arouse: feelings of outrage, compassion and piety when confronted with a reminder of a great Christian martyr.

It is perhaps unfortunate that some publicity for the exhibition tended to emphasise horror and the macabre at the expense of more illuminating and constructive responses (Ironically, one web site contained a delightful malapropism, calling the exhibition The Scared made Real!). This could reduce the purpose of the exhibition to something analogous to Madame Tussaud’s Chamber of Horrors, The London Dungeon, or voyeuristic television documentaries about physical abnormality and gory medical procedures. This would be unfortunate, since the exhibition has an important cultural and historical purpose and contains much work of outstanding quality and beauty.

Nevertheless, one must ask how such work fits into the sculptural tradition; indeed, whether it is sculpture at all or simply effigy-making. Western sculpture has been dominated by a presumption of monochromaticism. We tend to forget that the great creations of ancient Classical sculpture were originally gloriously polychromatic, and painted in quite lurid schematic colours. By the time they became models for future generations, the colour had worn away or faded to leave the dignified monochromes we now see in museums, and it is this imagery which has provided models for successive generations of sculptors.

The paintings in the exhibition illuminate the fruitful rapport with the sculpture of the period. At the social level, there is Velasquez’ remarkable portrait of Juan Martinez Montañés, one of the most significant sculptors of the day. The occasion was an invitation to visit Madrid from his native Seville in order to execute a clay head of Philip IV, and he is shown working on the commissioned head which, as a kind of pun on the creative process, Velasquez has left in a sketched state.

At a creative level, Zurbarán’s Christ on the Cross reveals the stylistic and technical relationship between painting and sculpture. Painted for a position in a chapel of the Dominican friary in Seville, the canvas was set back in an alcove illuminated from above on the right. The highly modelled chiaroscuro of the image faithfully reflects the fall of light across the canvas, creating a kind of visual ambiguity in which it might be taken for a sculpture.

Visiting this exhibition makes one see familiar works in a new light. Velasquez’ Christ after the flagellation is an image well known to anyone who visits the National Gallery collection. Seeing it in the context of contemporaneous sculpture makes one appreciate the massive corporeality of the image, and the tremendous sense of weight as the figure of Christ with its tied hands pulls heavily to the right against a taut rope. The excellent hand list prepared for the exhibition suggests that the figure of Christ might have been modelled upon a sculpted version of the subject.

The exhibition is imaginatively curated and displayed, evoking the spirit of the Baroque by maintaining a low sepulchral ambient light illuminated by pools of brilliance around the objects. Whether one’s interest is art-historical, religious or purely aesthetic, it is a show worth visiting. 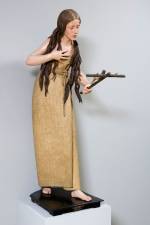 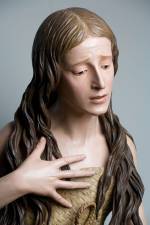 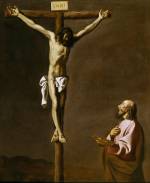 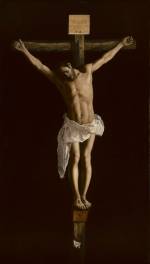 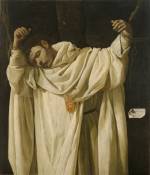 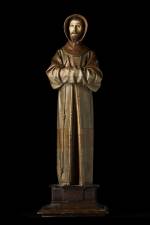 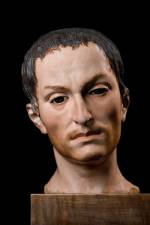 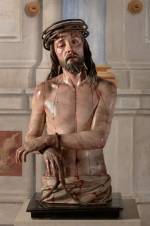 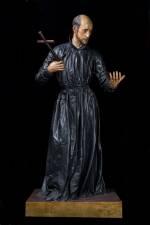 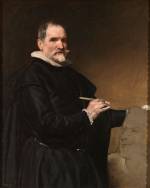