Rivera's paintings of the last 20 years present scenes in the streets or market places of Santa Fe, New Mexico, Guatemala, Mexico and Peru. What draws Rivera to such places are the colourful costumes and active street life of the native populations, as depicted in 'Indian Festival'. These scenes offer him the opportunity of depicting an interaction of animated, figural forms and colourful attire, although the pathos of their lives is undoubtedly also a draw for him. The interaction of figural forms has always been of interest to Rivera, informing his compositions even before he arrived in Santa Fe from New York City, 23 years ago. Two examples of his earlier paintings demonstrate the point: 'Birmingham', derived from the scenes of the Birmingham, Alabama riots of that year, a study for an 8 x 6 ft final painting of the race riot, and 'The Hockey Players', depicting the interaction of athletes in sports whose nature Rivera has always considered to be violent. In 'Birmingham', Rivera's feelings about the racial situation in the South at the time come through not only in the scene he chose to depict but also in the application of paint in long, quick strokes that emphasise the frantic movement of the figures. The colours are, for the most part, dark and sombre, adding to the sense of fear and impending doom depicted in the scene. 'The Hockey Players', in shades of blue and black, presents the clashing of bodies and hockey sticks that spells sports violence for Rivera. The paint here is also applied in thick, quick strokes that add to the sense of the quick, rough encounters of the players. 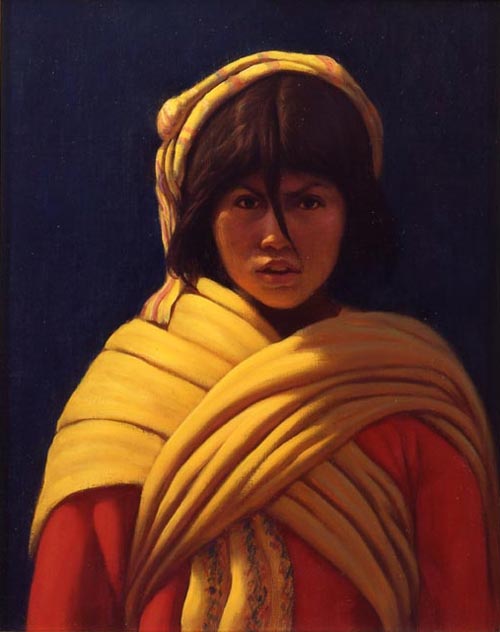 The application of paint in the earlier paintings is suggestive of the artist's attitude toward his subjects and the sombre colour represents his general mood while painting in New York. That mood changed dramatically once he arrived in Santa Fe, as did the colour of the paint for the new subjects he depicted. The scale of many of his paintings also became larger. There was a new 'lightness of being' in the paintings he rendered, an appreciation for, and awe of, the subject matter: figures of Indians selling their wares under the portal of the Governor's palace at the Plaza in Santa Fe, or Indians appearing in ritual festivals and market scenes. This new mood, colour and subject matter were further enhanced by Rivera's travels to Mexico and Guatemala, where he encountered more such scenes and figural interaction. Among his recent works are also smaller paintings, in a series of 16, 20, or more. His latest series is entitled 'Ventana' ('Windows'); small scale renderings or vignettes of poignant moments he witnessed in his travels in Guatemala, depicting figures in the market place, particular people who caught the attention and imagination of the artist, or the capture of their stance or momentary involvement: musicians, a woman selling fruit from her post in the marketplace, figures strolling or lounging, and women holding their children. They are brilliantly coloured, some lit from behind, or in full light, against bright backgrounds, or dark, or in shadow. The colour combinations and the formal elements of composition, such as the placement of the figures and their interaction, physically and in colour, give these paintings a grandeur larger than their small size. Two examples of earlier paintings, in larger scale but of somewhat similar scenes and colour composition, and exquisitely rendered, are 'The Watcher' and 'The White Rooster'.

In all of Rivera's paintings, the images emerge through the paint, layer by layer. Colour is added stroke by stroke, but even after a painting is completed, a quality of emerging reality persists, with a sense of figures floating up through the paint. Even when figures are presented in a representational scene, the effect is an abstraction of colour forms and lines, and it is these formal elements of composition that are the essence of Rivera's paintings. In 'Open Circle', the triangular white swathe of the blouse on the woman in the left foreground plays against the vertical area of the white blouse on the central figure, and the horizontal white shape of the flowers peeking out behind the woman in the right foreground carries the eye across the canvas. The curved horizontal stripes of the head covers on four of the figures and the striped blouse of the figure on the right play against each other; and forms in shadow play against those in light. Shapes of colour move across the painting, and lines of drapery play off each other, vertically and obliquely. Profiles of four of the women contrast with the full faces of the baby on the left and the woman in the centre, while the little girl's face on the right appears in three-quarter view. In canvases large and small, this is the compositional rhythm of Rivera's paintings. The paint Rivera uses produces a highly finished surface - in some forms resembling a tinted varnish - and it is this medium that also helps to create that quality of emerging reality that appears in his paintings.

Whereas his earlier New York paintings were based on sketches he rendered in subways, malls, cafes and airports, since his move to Santa Fe, he has used a camera instead of a sketchbook, which has become his tool for his paintings. Rivera looks through colour slides, searching for characters to use in his paintings, giving him a point of reference for his work. He takes pieces from different pictures and reinterprets them in the paintings. Rivera compares himself to a movie director, lighting a scene or a figure just like a movie director would, allowing the light to pull the parts of the painting together. His paintings depict the people of Guatemala or Mexico in all their indigenous splendour, caught in simple acts of life and bathed in rich colour and serene, chiaroscuro light. Their lives, their clothing, their traditions, their connections to one another, the dynamics of their personal relationships, their humanness, and even their spirituality, are what Rivera captures in his paintings. In his treatment of the subjects of his paintings, who make their living cultivating the soil or in the making of food, clothing or pottery, and in stripping out all extraneous elements, Rivera has placed a high value on simplicity, dignity and honesty. What is so apparent, in his work is the reverence for life.

But who is Elias Rivera? The special art issue of the Santa Fean, in June 2005, offered an article entitled Elias Rivera: the Legendary Painter Revealed. It contained an interview with Rivera in his studio by Katie Arnold, with photographs of the artist and his paintings by Douglas Merriam. This is one of many articles that have appeared in various publications in Santa Fe and New Mexico since his arrival in the south-west in 1982. Exhibitions of his paintings have been favourably reviewed since he began exhibiting there. The recent article in the Santa Fean, however, commemorates the Governor's Award he received in June 2005, in New Mexico, for Artist of the Year.

Rivera's first exhibition in Santa Fe was at the Munson Gallery on Canyon Road, but he now exhibits exclusively at the Riva Yares Gallery in downtown Santa Fe. He has also exhibited in other venues such as Aspen, Colorado, Washington, DC, and at the Oklahoma City Museum of Art, when he was Distinguished Artist in Residence at the School of Art, the University of Oklahoma, from 26 September to 31 October 2004. He began his career in New York City.

Born in the Bronx in 1937, an only child of Puerto Rican parents, his early life was difficult, moving from borough to borough, and apartment to apartment, because his father had difficulty supporting the family. His first exposure to art was at the age of six when he was bedridden for two weeks with a rheumatic heart murmur, and his mother gave him some clay to keep him occupied. He began to model it into figures and that, he claims, was the beginning of his lifelong interest in art.

At the age of 18, Rivera enrolled in the Art Students League, founded in New York City in 1875. With no application process and no degrees given, the League was known for its free approach to art education. Students pay their dues, choose a teacher and style of painting and stay for as long as they like. Rivera attended from 1955 to 1961. Having entered with the idea of becoming an illustrator, he soon shifted his vision to figurative painting. From then on, he sketched and painted constantly but took jobs as a dance teacher and waiter to support himself. Subsequently, he moved to Brooklyn, where he and another artist, Harvey Dinnerstein, purchased a brownstone townhouse on President Street. Rivera took the first two floors and the basement; Dinnerstein took the top two floors. As well as his studio on the parlour floor of the brownstone, Rivera set up a carpentry shop in the basement, to support himself by making and selling cabinetry and picture frames. It wasn't easy, but he certainly had the admiration of friends and acquaintances that dropped in to visit on their way home to see his new work. His home became a meeting place and Rivera was dubbed the 'mayor of President Street.'

Rivera has always been, as he describes it, a 'people painter.' In New York City, he spent his time sketching people on subway trains, in local cafes, at airports, in lounges of office buildings or wherever he could find interesting people or scenes. To help support himself as a painter, he also painted portraits. The original owners of Fortunoff, a famous giftware/household specialty store in New York, were among those whose portraits he painted, as well as many friends and acquaintances. However, living in New York City, where abstract painting was the vogue in the 1960s and 70s, Rivera had difficulty finding galleries to exhibit his figurative paintings and, consequently, he seldom exhibited his work there.

In 1978, a neighbour of Rivera's who had visited the first Santa Fe film festival held there that year, told him about the city and its art community. Another friend, and fellow artist, Albert Handel, who was teaching pastel painting in Santa Fe, also told Rivera about the art scene and encouraged him to move there. Finally, in 1982, fed up with New York City, Rivera packed up his paints, outfitted a van his mother bought him so he could paint along the way, and left for Santa Fe. Almost immediately, his figural paintings were admired and well received there. They were transformed from the darker moods and tones of his New York paintings to the colourful and upbeat scenes he found in Santa Fe. Eventually, the Riva Yares Gallery, where he remains today, began to represent him. In summer 2006 they will mount a retrospective exhibition of his paintings that will be shown in their gallery in Santa Fe, as well as at the Art Museum of Santa Fe and in Albuquerque, New Mexico. The well-known English art historian, Edward Lucie-Smith, wrote the essay for the catalogue that will be available for the exhibition in 2006. 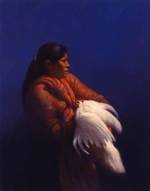 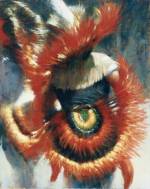