Rem Koolhaas, architect and author of Delirious New York, an important architectural tract of the mid-1970s, then made a telling New York skyscraper image entitled ‘Dream of Liberty’ with Madelon Vriesendorp. September 11 will have brought to mind this picture for many people. This month Koolhaas has seen the opening of his latest architectural project in Las Vegas; the Las Vegas Guggenheim. Arguably of course, Las Vegas, Route 91 et al, is still a potent cocktail of kitsch. As in the famous book publication which immediately preceded the Koolhaas book by Venturi, Scott-Brown and Izenour, entitled Learning from Las Vegas (1972), the writing was already on the wall. What no one anticipated was the extent to which the temples of art – the art museums – would be drawn laughing and screaming into the whole game. Looking back from the 21st century it has to be realised that the museum world is becoming, if not exactly Route 91, at least an infinitely expanding shopping mall; the ‘enclaves’ are becoming boutiques. 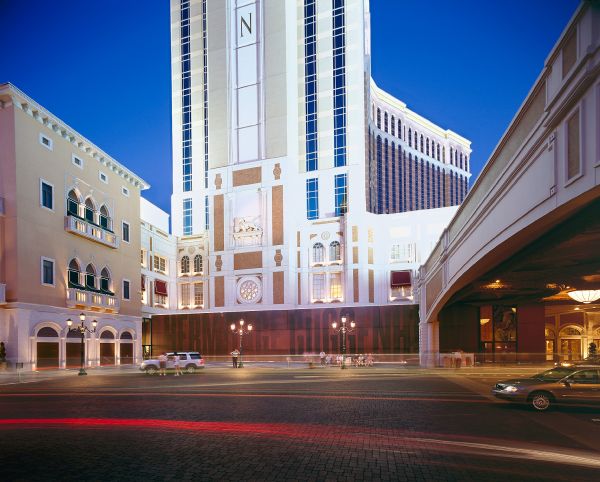 It is still possible for a ‘city state’ like the Getty Museum to set a gilded citadel up above the plane, but that is becoming increasingly impossible. Opening some three weeks ago, the Las Vegas Guggenheim is a dramatic extension of the parent Guggenheim model as a distinctive ‘brand’. It is not, however, a bigger splash than Frank Gehry’s Bilbao Guggenheim. Rem Koolhaas had the problem of locating tightly within the Venetian Hotel and Casino group complex. Certainly (as the street billboard man would say) ‘the End is Nigh’: it’s nigh indeed, for the total enclosure of the Temple by Mammon. It’s quite a pleasant embrace, while you are in it. Once outside, art will never be the same.

From the gaming tables of the Casino, the Las Vegas Guggenheim is barely a long throw of the dice or a croupier’s shadow away. Koolhaas has divided the museum twofold: the ‘classical part’ – the Guggenheim Hermitage as it is called – results from a special deal with the Hermitage, St Petersburg, and for the opening is currently showing major works from their remarkable Impressionist collection. A second gallery, known as the ‘Big Box’ space, is designed to hold contemporary exhibitions. A kind of ‘dive’, a 9 m ravine, splits this area thus into two, and a wildly running stairway reaches the lower level, glowing and vibrating with lime-green light. Frank Gehry, master of the new brand image, was actually hired to design the opening exhibition, ‘The Art of the Motorcycle’. A pivoting, red and black chevronned door (this by Koolhaas) leads one into the show – but the zoomy stripes within the ‘dive’ are all Gehry.

Koolhaas has created a ‘precious interior’ for the separate Hermitage gallery. The protective walls are of Cor-Ten steel, which emphasises the physical security (although electronic safeguards provide this in fact). The paintings are literally held to these walls by magnets, and the textured, rusted Cor-Ten provides a cool parody of the Hermitage’s velvet-lined walls.

Like McDonalds, Guggenheim is a brand. Here it plays on the Las Vegas strip, blending in dramatic, delirious parody with the longstanding, constantly changing pleasure route. ‘Motorbikes’, says Hilton Kramer, veteran New York City commentator and editor, ‘aren’t an art form. What we’re seeing now is the complete transformation of the art museum into a kind of culture mall: it’s popularising, but also debasing’. The ‘brand’, Kramer says, has ‘just lost credibility’. And one can’t deny the old seer has got a point. In a sense, the Hermitage Guggenheim is just a big boutique, but a boutique all the same but in name. And the ‘Big Box’ is a kind of amusement space for all comers. The ‘dive’ is today’s replacement for the 20th century promenade architecturale. And what of the olfactory culture: there is not much of the smell of hot rubber, gasoline (that’s all outside) but the mallish parfumerie lingers in the air (whether from the visitors or an extra enhancement one can’t quite be sure at all). In the Hermitage Guggenheim, the smell is not quite right either (one seeks a smell more of velvet perhaps, than of St Petersburg’s citizenry); but that can soon be remedied in the Aladdin’s Cave that is the Las Vegas Guggenheim.

The cross-cultural ramifications of international museum branding are formidable, and are not to be taken lightly, but ‘product’ first: there is, indeed, what the late Peter Fuller (critic and founder of Modern Painters) described as ‘Biennale International Club Class Art’ (BICCA) to contend with. What Peter feared acutely was the way in which the art ‘product’ of the day can be pre-programmed to meet curatorial and critical presumptions, rather than spontaneous work originally conceived by artists themselves. Will the genuine great national museum collections themselves now be reduced to filling ‘jewel-box’ detached boutique spaces in the new art malls such as Las Vegas?

A whole range of currently discussed issues re-emerge here, and the way an institution such as the Guggenheim sees itself as prospering is critical. The brand is, of course, already being franchised out. But as any rag-trade exponent will say, the problem with all franchise arrangements must lie with the assertion of brand image control: the receiver of the franchise will seek to amend the brand to suit regional or local variations in taste, while preserving the market appeal of the name or to increase margins. Thomas Krens, Director of the Guggenheim programme, has, ruthlessly and with success, wielded great power in expanding his brand. The actual precursor to the Bilbao Guggenheim was a brilliantly conceived Guggenheim for Austria, located at Salzburg, and designed by Hans Hollein within a rocky escarpment facing the city. There were problems with the Austrian authorities over funding, a different Viennese site was proposed, and the project was then withdrawn by Krens when the authorities failed to meet his requirements. A future Guggenheim may next be in Brazil. Krens can more or less dictate his terms. As Ana Somers Cocks, Editor of The Art Newspaper says, ‘You rent the use of the name, and you rent the products’, and branding is here to stay. Tate Modern, the National Galleries of Scotland, the Prado, the Louvre and the Royal Academy, all must fly with the flock. The difference is however, in the process of expanding all within the institutionalisation, from the centres to the regions, in lending and exchanging works, to maintain curatorial quality control.

It is no coincidence that this development in museum brand marketing has been driven from the premise of western consumer culture. What may shock its exponents is the extent to which Asian cultures may not be as attached to the imperatives of the original work and its propagation to the exclusion of replication. In Kyoto, for example, the architect Tadao Ando built the Garden of Fine Art (l991–94), Sakyo-ku, specifically making use of the replication of Seurat’s ‘La Grande Jatte’ and Monet’s ‘Water Lilies’, as well as Renaissance masterpieces, by means of ceramic tiles. In the future museums of the malls, the ‘boutiques’ for classical masterpieces may wind up simply showing replicas. Marketing logic might well reach this conclusion, unpalatable as it may seem to those currently expanding the museum brand and markets, under the banner of ‘Art for the people’.