Tesfaye Urgessa – interview: ‘Young people don’t need to have a geographical boundary. They belong where the dream is’

Tesfaye Urgessa – interview: ‘Young people don’t need to have a geographical boundary. They belong where the dream is’

Tesfaye Urgessa talks about his latest exhibition, breaking down borders and what home means to him 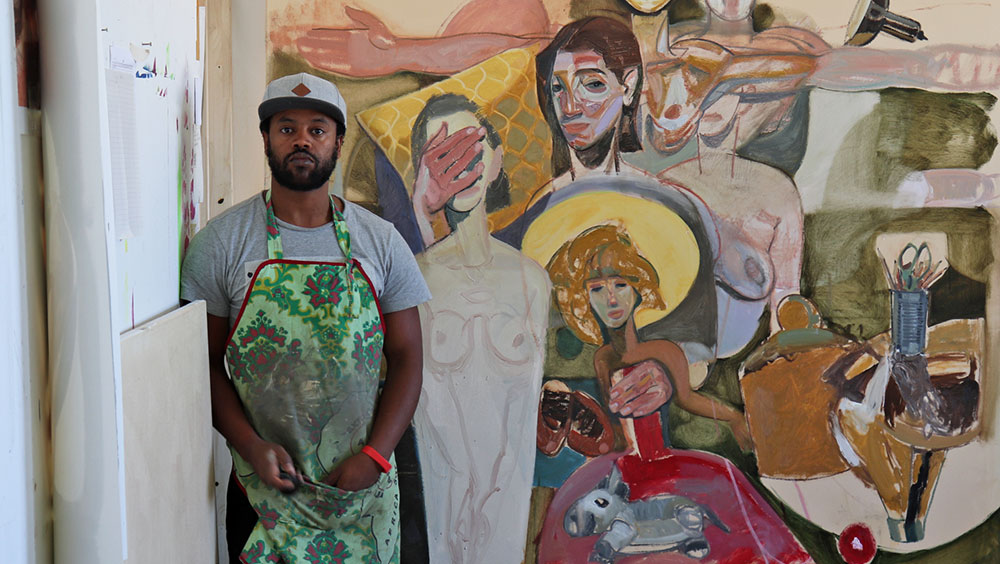 Tesfaye Urgessa. Photo courtesy of Saatchi Yates and the artist.

Tesfaye Urgessa is an artist with a vision. He was born in Addis Ababa in 1983 and moved to Stuttgart in 2009, where he enrolled at the Staatliche Akademie der Bildenden Künste. In 2018, he had a major exhibition at the Uffizi Galleries in Florence, where some of his work resides in the permanent collection. His latest show at Saatchi Yates in London explores society and immigration with groups of  lean but sturdy figures. A recurring theme in his paintings is family, which, he believes, is the “pillar of society”. “When you talk about society,” he says, “you’re at the same time talking about family.” Other canvases depict crowds squeezed into dark spaces, or lines of sturdy men with mask-like faces marching in unison.

Urgessa favours square canvases, twisting and contorting bodies into angular expressions of movement, tenderness and grief. Flesh tones vary from the meaty to the mouldering and limbs become entangled and truncated. The more you look, the more you see. Urgessa works on several paintings at once, living with them in his studio for many months, erasing elements before adding new ones, but leaving traces of each phase of the process. He spoke to Studio International via Skype from his studio in Stuttgart about home, immigration and how his daughter helps him when he is in need of inspiration.

Emily Spicer: Who were your early influences?

Tesfaye Urgessa: When my father was in his mid-40s, he met a local artist and was very impressed by what he saw, so he started to teach himself. When he came home from work, he started to draw and paint, mostly local scenes. He encouraged us, too. He bought us a book, How to Teach Yourself to Draw, and it was my favourite book. That was the beginning. Every time I went to a neighbour’s house, there was a portrait of a woman and man drawn by my father. Everyone was very proud of what he could do. And I was proud. At school I was known as the guy who draws all the time, in every exercise book. I used to get into a lot of trouble.

ES: So that’s the beginning, and then presumably you started to look to other artists in Ethiopia and further afield. Did they have any influence on you?

TU: Yes, but much later. I didn’t know there was a profession called an artist. The next thing for me was technical drawing, and I studied technical drawing and architecture and then I heard about the fine art school, because my big brother went there. Two years later, I followed him and joined the fine arts school. And after that I thought, OK, this is a big thing, I can make a career out of this.

ES: My education was mostly in western art. It was a very Eurocentric education, so when I see your work, I wonder how much of my own bias is coming to it. But I recognise a bit of Picasso and Lucian Freud in your figures. Is that fair to say?

TU: I think to some extent, yes. The school I went to was a major school, almost the only fine art school in the country, so most of our professors went to Russia in the 70s and 80s to learn about drawing and painting. At the time, the dominant movement was socialist realism, so they were very good at drawing and they taught us how to study anatomy. When I was studying, there was also the opportunity to expand a little bit more because of the internet, so we used to search what was happening in Europe, about Picasso, Lucian Freud, Francis Bacon – all those good artists.

ES: You have been in Germany for 11 years. Has that had an impact on the themes you explore in your work?

TU: When I was in Ethiopia I was interested in the themes I am working on now, about injustice and the fragility of human beings and so on. But coming to Germany changed a lot of things for me. I was looking at things as if for the first time. It gave me the chance to look at everything anew. And there was also the opportunity to see in the museums original works that I had known only from reproductions. The mixture [of those things] was a good experience.

ES: Do you think your work has become more political since you moved to Europe?

TU: Politically, when I was in Ethiopia, it was as if I was witnessing other people’s experiences; there was a slight gap. But in Germany I came to experience things directly. This makes things a little bit intense.

ES: What things in particular?

TU: Things such as the race difference and how you are treated. I used to know these things from the movies and so on, but living it personally is something different.

ES: Can you tell me a little bit about your show, which is opening at Saatchi Yates. Several of the paintings are titled No Country for Young Men. Does this reference immigration to Europe and the resistance some Europeans are putting up to that movement of people?

TU: The title came from the series of work I have been developing since 2016. I have produced 28 to 30 paintings on that theme. In the beginning, in 2016, I heard on the news that 56 million people were on their way, looking for a new country to live in. That figure shocked me. My wife is working with immigrants and I was also helping a little bit with that, so I thought I knew about immigration and how severe it was, but I was really shocked.

I work very slowly, but simultaneously on many different works, and over the course of six months, the paintings took on a very quadratic shape. They almost look like people trapped in ice cubes. I was thinking, these are people looking for a country but, at the same time, there is a sort of flipside. No Country for Young Men means for me that young people don’t need to have this geographical boundary. I believe young people belong where the dream is. On one side they are denied the country, on the other side they are beyond any definite country.

I think this is the natural way it should be. I think the world is going to be like that. If things progress, then within the next 100 years countries may not have geographical boundaries. This is inevitable, I think. Europe is getting together and Africa is getting together and, at some point, Europe and Africa will get together, and also other continents. I think human beings will arrive at such an enlightened state.

ES: With Brexit, however, there is a sense of rising isolationism, too, a fear of too much freedom between borders. When people react in that way, nationalism often rises, too.

TU: I don’t think that will keep going. I think human beings will evolve one way or another. There is an English proverb: it’s always darkest before the dawn. It’s like this, you know.

ES: You hope that we are on the cusp, then, of a more enlightened time.

TU: Yes, because there are new, positive movements. Many young people are participating in trying to do many positive things. That is a sign. At some point the numbers will get bigger.

ES: Could we talk about some individual paintings in your show at Saatchi Yates? One of the paintings from that series shows a group of men. In front of them there appears to be child with a blue face lying on a stretcher. Could you tell me a little about this painting?

TU: As an immigrant, if you are accepted into a country, it doesn’t automatically mean you have a home. Having a home is something completely different. Having a home means not being treated differently, to be part of society, and that takes a long time. Some people never arrive at that point – they just exist, and that’s it. With every No Country for Young Men painting, I tried to give an extra flavour, an extra particular thing, but I didn’t know what to paint. Then I told my eight-year-old daughter what I was looking for and she knew what to paint. She painted that small figure and it fits totally with the painting. There are some paintings I have done in cooperation with my daughter. She’s going to be a very good painter – much, much better than me – because she’s very into it and has already exhibited a couple of times. So she got it! [laughs]

ES: Do you hope that she will be an artist when she grows up?

ES: I’d really like to hear about your favourite paintings from this exhibition.

ES: How do you think your paintings will evolve in the future?

TU: I always want to keep my history. Things evolve slowly, like I do as a person. I don’t become a different person when I wake up the next day. I don’t want to plan my change. When my personality changes, my painting will change. I am not trying to be original. I am not trying to invent something new. My job is just to give recognition to those images that come into my head and stay in my head. That is the only thing I do. And when those things change, the painting changes.