Inspired by St Ives painters such as Ben Nicholson and Alfred Wallis, Danny Fox paints his home town, turning the people and places around him into half-imagined figures in a world of legend

Having returned home to St Ives in Cornwall after many years in London and then Los Angeles, the painter Danny Fox (b1986), in his latest exhibition, at Saatchi Yates on Cork Street, not only explores where he comes from, but also what it means to be a “painter”, a mythologised and feted figure in contemporary society.

It has been about seven years since I last saw him in person, in which time he has experienced a meteoric rise in his career as a painter. Back then, in Paris, he was worried about whether he would ever break through and concerned that he did not really know anyone in the art world. We drank red wine in bistros, talked about his writing (his practice also involves poems, and many of his paintings integrate writing and storytelling), Picasso, and people we knew. 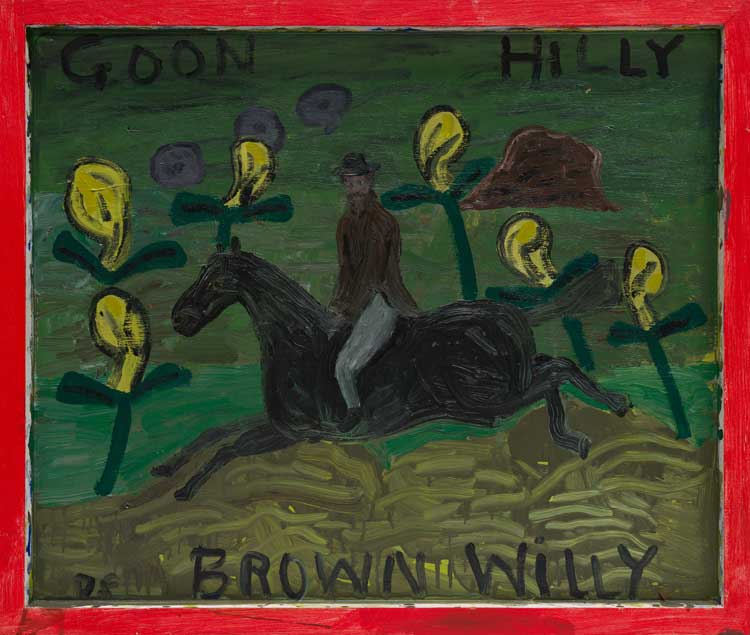 Other than, presumably, being less worried about not knowing enough people in the art world, he is not much changed – he is still warm and wry, now standing on the periphery of his own exhibition as if bemused by the scene, holding a glass of ice water. He is, he knows, also part of the show, although he seems at once comfortable with this fact and removed from it. He wears rose-tinted sunglasses indoors and an oversized coat; he smiles warmly. There are a lot of people filling the bright white upstairs space of Saatchi Yates. His canvases, and the striking figures they present, tower over the crowds of the well-dressed and well-read. As people mill around and take photos, Fox stays downstairs as if he is waiting in the wings. 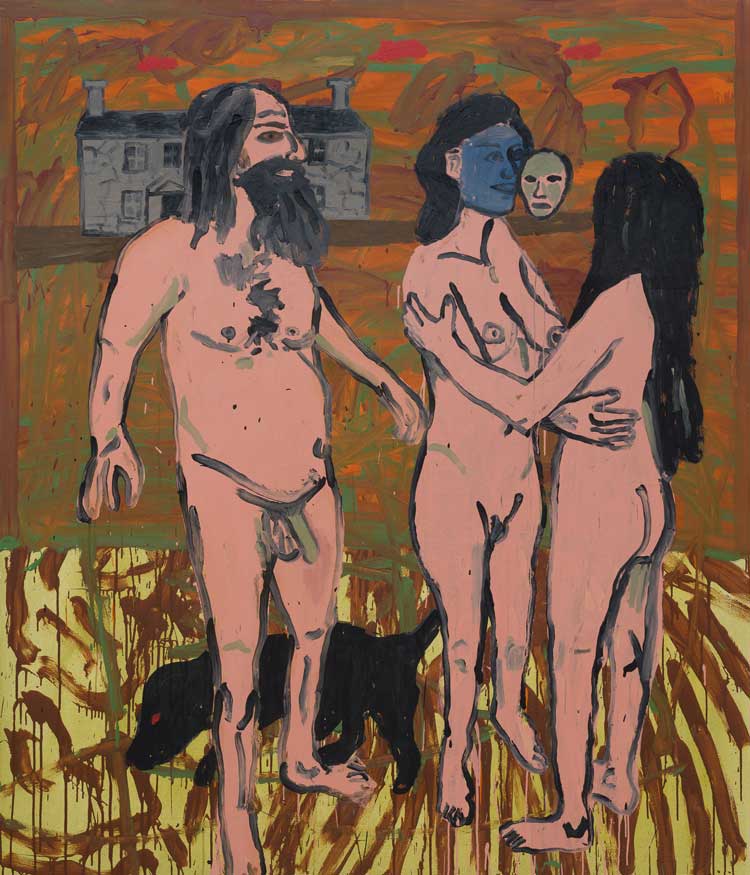 He has always had an eye for the mythological, and an alchemical ability to mythologise. He is fascinated by the stories we tell ourselves, personally and societally, and the rituals we enact repeatedly and at times absurdly. His characters gaze down God-like, or sometimes demon-like, silently telling their ballads and their secrets, muddying the waters and dancing around one another, brooding and longing and whiling away their days. There is always an intensity to his work, a sort of yearning, or at least the space to project one’s own yearning. There are new, muddy greens and greys and crimsons in these works, and then familiar little signs and secrets, and men fleeing scenes on horseback. There are moody women, modern Sirens, cult leaders. There are little dolphins and little canoes. 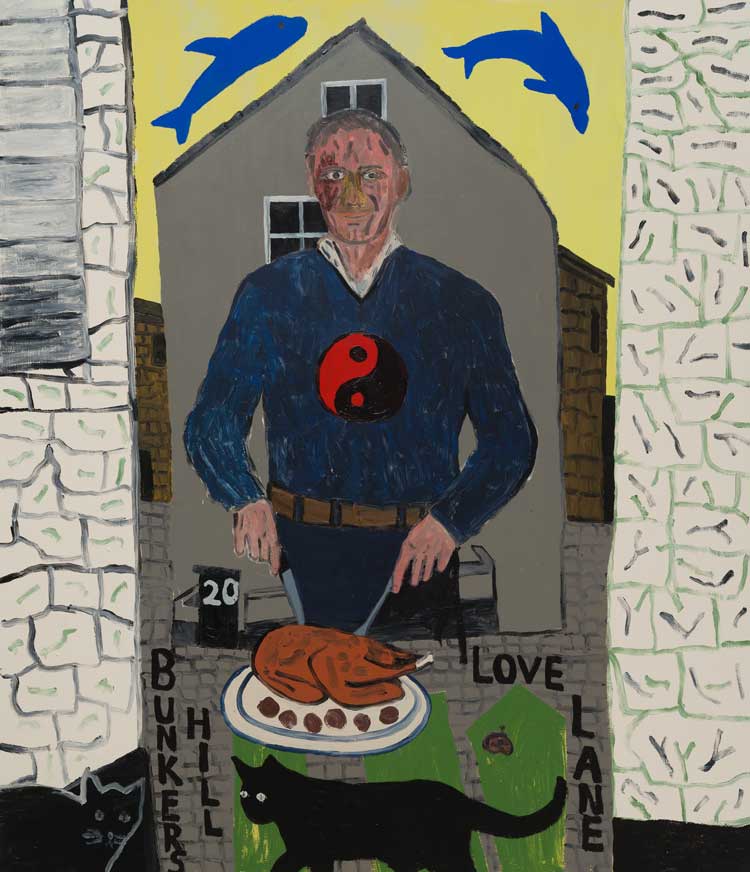 Despite growing up in St Ives, Danny has not previously painted the sea, or rather the sea-faring culture and folktales that are swept up in life on the coast. He has painted girls in Hollywood, musicians on Skid Row, and the gutter life of London (I think I first met Danny when we were both sitting on the edge of a gutter in Soho, I realise now); he has painted about the legacies of colonialism and the history of portraiture before. He has shown drawings of Chateau Marmont, the hotel on Sunset Boulevard, and the delirious, strained days of young love, and divorce. But now that he is painting the coast, all his previous paintings seem to have been secretly singing these shanties all along. All the figures he has presented before have been modern mermaids and monsters and men, caught in storms, or recovering from them. Now the coastal scenery simply emerges more clearly from the mist. 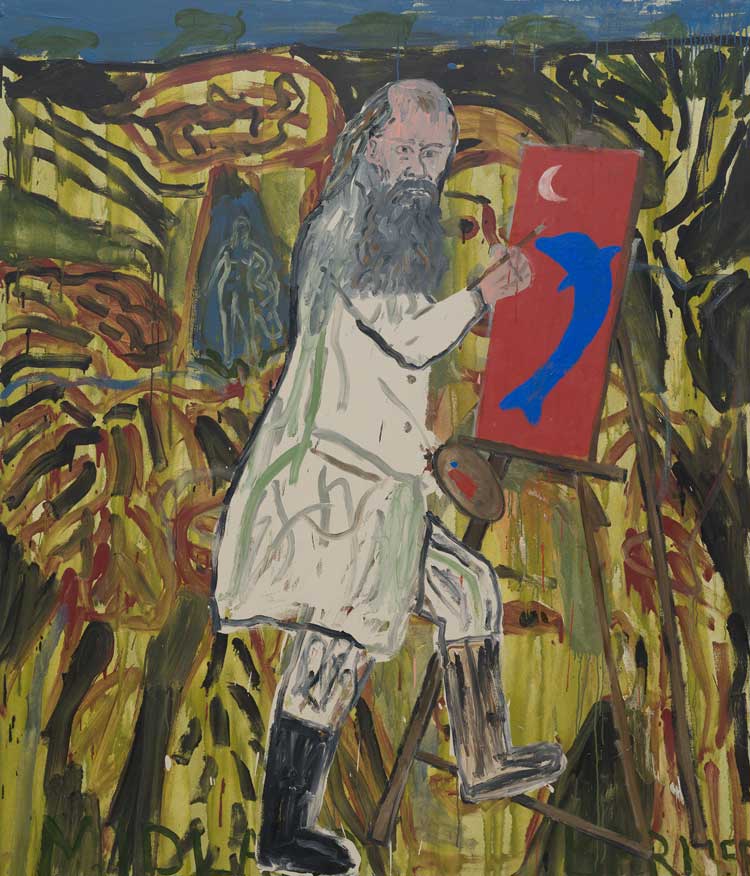 The sailor has returned home with his stories of girls in every port, of islands and escapism and drownings. Here are the treasures, the songs, the steals. But beyond all this, there is evidently a very real devotion to painting and paint itself, a love of colour and absorbing oneself in it. Painting is like sailing in a sense; you work hard to steer through it, against it, with it. You try not to drown. You love it regardless. 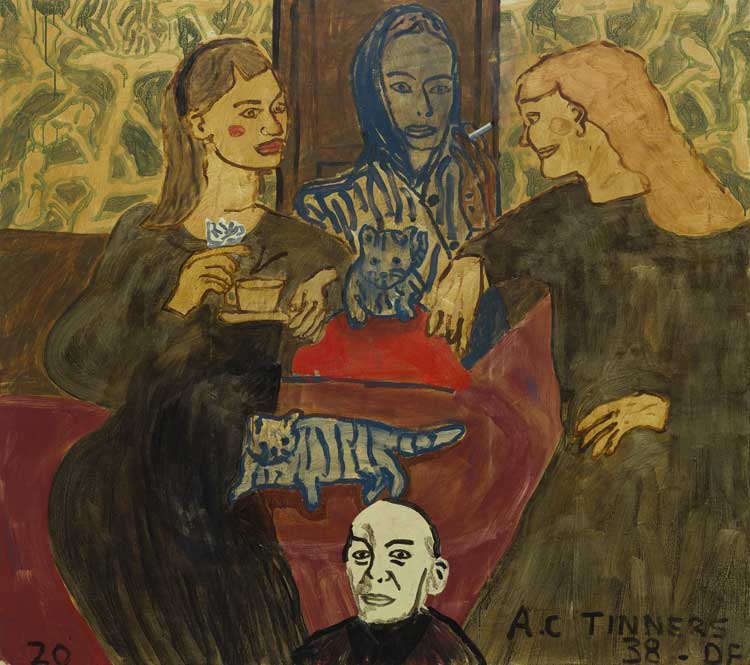 Painting can also be a sort of tourism, though – a way of fetishising and passing through a place in which you will never settle. Fox could easily have produced a bunch of seaside town postcards, in this mindset – easy scenes from a gentrified town. Instead, he has gone further into the murkiness of his own soul and his experiences, and those he sees reflected in the people and places around him. He has painted his hometown with love and integrity, capturing its raw character and history beyond the superficial or the simply pleasing. Inspired, in particular, by the history of St Ives painters Ben Nicholson and Alfred Wallis, these works also feature familiar local buildings and pubs and streets, seemingly haunted and subdued, sometimes dissolute, always striking. 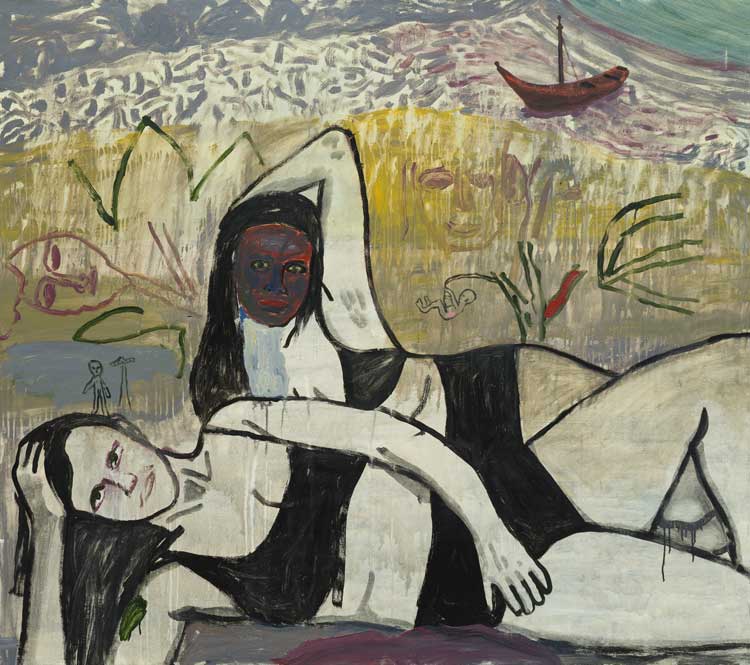 He sees the isolation and the days winding by. In The Beach is Boring (Without You), 2021, for example, two sullen girls in black bikinis appear to be haunted by faces in mauve and a tiny foetus, and another tiny baby lurking in the background. 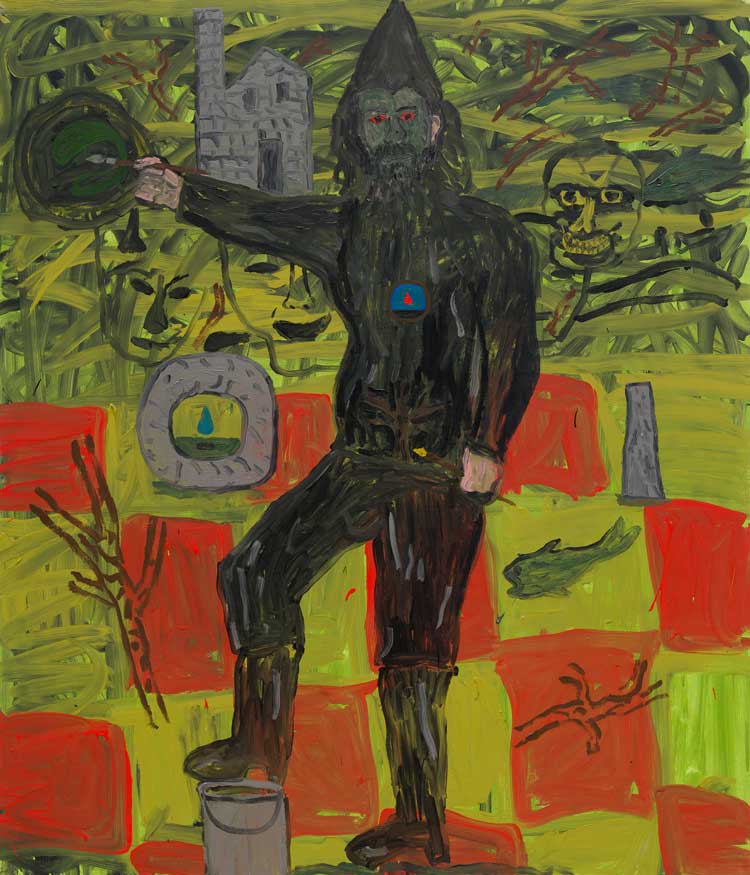 There is murky, acidic dissolution in Can of Petrol, Tin of Mackerel, Get on the Jet Fuel (2021), in which a man in black (who somewhat resembles Fox), with a dark green face and red eyes, stands with one foot on a can of paint, a cast of ghostly faces behind him. And in The Engine Inn (2021), three men, who evoke the Trinity or the three wise men, in a sense, stand outside a grey brick building in the darkness, a red head in the foreground. 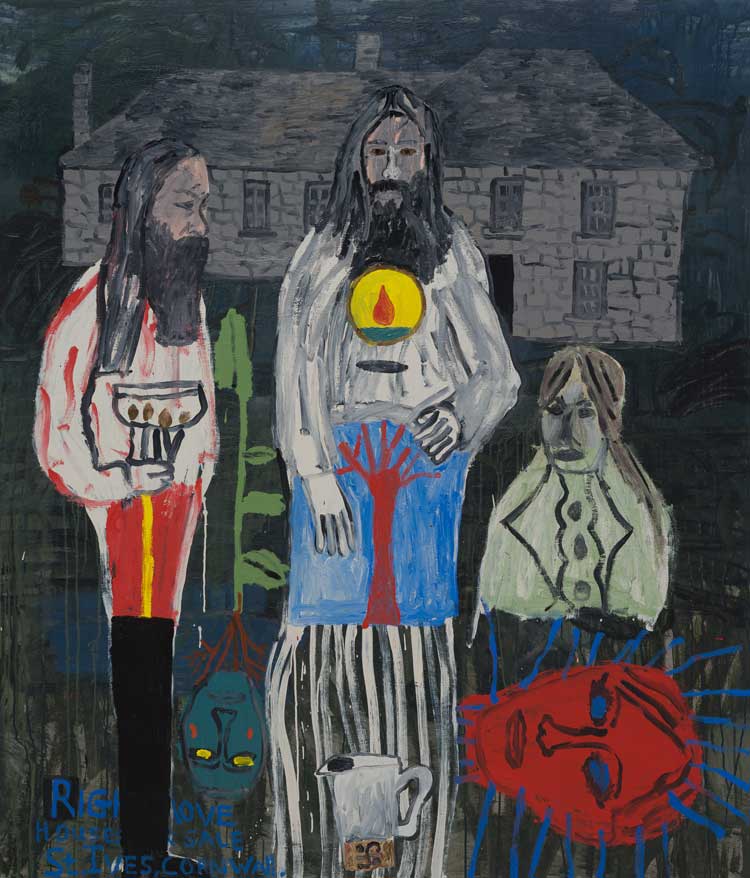 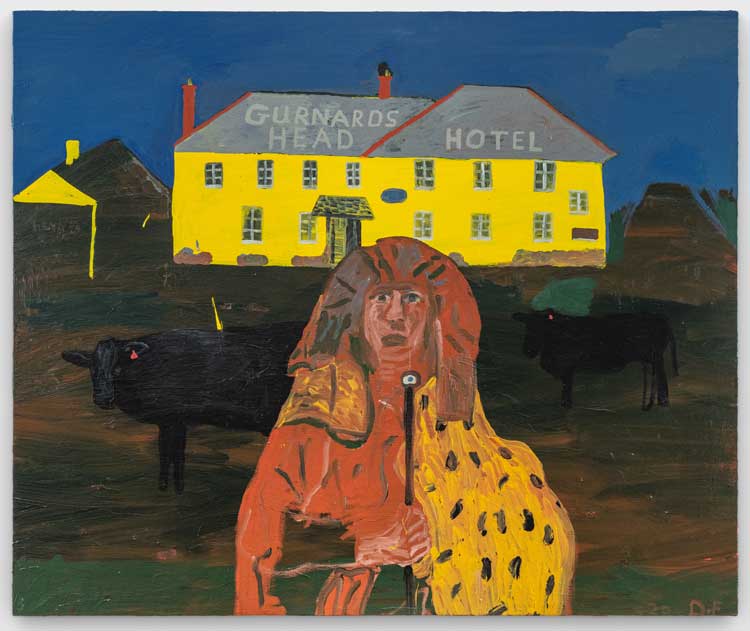 In Gurnard’s Head (2020), a figure resembling an Egyptian tomb emerges from a landscape in which two black cows roam, with the yellow country inn The Gurnard’s Head standing behind like a garish lighthouse in the dusky light.

Although all these paintings take a Romantic approach to the coast, there is, within that, a consistent sense of horror and rawness, subdued and hypnotic.  Fox also weaves in his own reflection on what it is to paint, placing himself and his predecessors into the Cornish coastline as much a part of the place as the distant boats or women lounging on the beach. The fabled painter is one more haunting and haunted figure in this world of legends and half-imagined figures. Like all good myths, there is something true in these paintings, and this painter. That, and the tricks, timing, and persistent allure of an excellent storyteller. 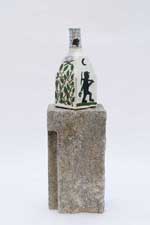 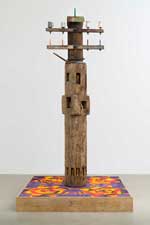