My first encounter with Tan Dun was through his multimedia concerto grosso 'The Map' last October in Shanghai. He still used the usual western musical instruments, however, what left a deep impression on me was his attempt to fuse western styles with his eastern roots. In his music, the cello interacts beautifully with the video footage of Nuo masked ritual drama, a Miao trumpet player, a villager who blows on a leaf and an ululating Dong female soloist from the mountains. This journey through space and time touches the soul and illustrates Tan's way into that spiritual world using avant-garde western techniques.

Perhaps, Tan Dun is best known for the Oscar-winning original score for Ang Lee's 'Crouching Tiger, Hidden Dragon' and his concertos using stone, paper or water. However, Tan does not believe in staying within the confines of music. His latest transgression brought him into the realm of visual arts, when the conceptual and multifaceted composer/conductor held his first solo multimedia exhibition - 'Visual Music' - at the Shanghai Gallery of Art. Conceptualised as an installation of visual music, the exhibit explored the process of 'Deconstruction - Reconstruction - Resurrection' through the rebuilding of abandoned pianos. This exhibition is part of a larger series of visual music projects by Tan Dun involving hundreds of pianos, which will be presented over several years around the world. In addition, the exhibition also featured multimedia installations and nearly a dozen prints and manuscripts, including the score he composed for the film 'Crouching Tiger, Hidden Dragon.'

Like his musical pieces that create an occasion for the audience, Tan's musical landscape invites the audience to explore his music 'visually'. The prelude to the exhibition featured elements of the dismantled piano laid out on the floor in a circular pattern reminiscent of a Zen meditation garden. It seemed to imply the decomposition of civilisation and yet, at the same time, the relics conveyed a sense of eternity. The theme 'Deconstruction - Reconstruction - Resurrection' is further exemplified through two deconstructed pianos that formed a pyramidal rubble of keys, chords and other assorted piano parts. Three monitors completed the background, featuring video footages that portrayed the various phases in the deconstruction and reconstruction of the piano. In it, we saw Tan himself wielding a sledgehammer and slowly hacking away the old instruments. The pounding smashing sound resembled the earth-shaking music of Beethoven's Symphony No.5. Another part of the installation featured a resurrected piano with multi-coloured keys. This reversal of the usual black and white piano keys disrupted the visual assumption of the piano player. Here, Tan played with the abstract quality of sound and vision and brought them back to their origin. He proposed a new experience by altering the musical property of colour that draws no intuitive parallels between emotion and colour.

'For me, there are no boundaries between the visual and the audio in art creation itself. They constitute a unified, yet circular realm for my thinking,' said Tan Dun as he discussed the topics of interdisciplinary practice and media. Tan first discovered some 'retired' pianos accidentally in the warehouse of a music school in Shanghai. Each piano had been played by hundreds of people to such an extent that a little smooth dent had formed on each key. Standing amidst them, he felt like he was in the middle of a huge ruin of human history, listening to the harmonious sound emitted when the key hit the chords. The sound seemed to recount numerous unending stories, answering numerous unanswered questions to the past. After experiencing different space-time change, the appearance of these pianos might be old and tattered, but they still make a beautiful sound like new pianos. The idea to create 'visual music' hence sprouted in Tan's heart. He began to collect old pianos, to send them for repair and remove all unusable and tattered parts. Utilising the remaining chords and body, he redesigned, assembled and created a new 'visual music sculpture' that allows man to play or make music through computer engineering means. Through this artistic act, Tan began to record voices from his innermost heart and amalgamating them with space-time values, attempting to continue to recount untold stories through these resurrected pianos. Time, war and disaster might be able to destroy the external appearance of all matters, but music and dreams will never be extinguished.

Contemporary art is an activity of transgression and manipulation of media. Wassily Kandinsky and Paul Klee broke away from realistic representation by using colour and composition to express the abstract quality of music. The musical notation and performances of John Cage had a huge impact on contemporary visual art forms like new media and web art. He composed audio and visual artistic elements that operate in complete unison and can no longer be separated. As a visual exhibition, Tan's exhibition might not provide new insights. Yet, it is another attempt to cross over into new genres, blurring the lines between art and music and blending Tan's own modernist style with classical traditions, from the East and the West. He is reciting his concept of 'Samsara' through the pianos. 'There is no beginning or end to life. Only continuity.' 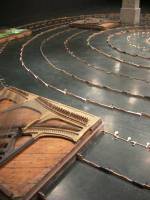 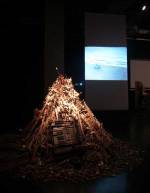