Concerned with the human condition and the solitary existence of individuals, Hamilton’s paintings condense figures into a couple of suggestive brush strokes, stranded in darkness or light. This retrospective offers an overview of two decades of her work

Drips of paint, suggestive brush strokes, thin translucent veils rendering the surface indistinct. Even when clustered together, Susie Hamilton’s paintings evoke a pang of loneliness: they offer snapshots capturing that sense of isolation and existential angst we have all felt during moments of despair. Returning to Paul Stolper Gallery for a 20-year retrospective, the artist offers an overview of her work, showing both its breadth, but also the simultaneous consistency of her preoccupation: lone figures, filled with sadness, exposed in darkness or light; the comedy of human pursuits. As Albert Camus wrote: “At any street corner the feeling of absurdity can strike any man in the face.”

“I see my figures as part of a world of power and dynamism,” Hamilton explains, “but they themselves are struggling in that world, vulnerable to things that are more powerful than they are. […] I’d like them to communicate something about the restless, comic, unfinished, untidy spectacle of life.” Her painterly techniques, such as adding Fairy Liquid to acrylic paint so that it makes “blooms” on the canvas and using watery acrylic so that it seeps over the boundaries of the figures, add to this battle for existence, and, in her quest to communicate economically – albeit creating intensity through compression – Hamilton’s figures are often reduced to mere blots and specks of paint. Some appear to effervesce at their edges, merging with the background in a Baselitz-esque smear.

The title of the exhibition, In Atoms, comes from Samuel Beckett’s 1956 radio play All That Fall, and can be read on many levels, not least suggesting “an energy bordering on violence”, as the figures – or atomic elements – go about their day-to-day business, colliding and bouncing off one another, connecting briefly, but then moving on. As in Michel Houellebecq’s Atomised, which narrates the bleak and unrewarding quotidian lives of its half-brother protagonists, humans are proved, in the end, to be nothing more than particles. In her combination of looseness and precision, Hamilton seeks to convey beauty in the world of the microscopic as in Kandinsky’s Composition paintings of discs and circles (1923-39).

An English graduate, married to a playwright, Hamilton is, unsurprisingly, greatly influenced by literature. “I’ve always wanted to paint poems,” she says. One series of paintings responds to Shakespeare’s The Tempest, and an example from this, Weeping Agin the King my Father’s Wrack / 2 (Ferdinand) (2011) is cleverly juxtaposed in the window alongside City (2004). In the former, a man sits alone, weeping (or so it seems), on a hill; in the latter, a tropical bird perches on a branch. Both are painted in dark blues and greens and there is an amazing symmetry and echoing of shape and composition, despite their very disparate content. This is the case for much of Hamilton’s work. In the opposite window, for example, Marigot (2014) hangs alongside Marigot / 6 (2014): a man following an ape through a forest and two figures, the lead one on horseback. Again, the two paintings, entirely different in what they depict, could almost be traced from the same template. This repetition and similarity reinforces the sense of the mundane, the humdrum of everyday life, the futility of it all. We see others as replicas of ourselves, yet feel stranded and alone, misunderstood.

Furthermore, the juxtaposition of light and darkness, heat and cold – as comes particularly to the fore in the displaying of Flamboyant Jungle / 4 (2008), with its immense stretch of pink and orange tropical heat, opposite the tiny, chilly Through the Frost (2001) – enables Hamilton’s works and themes to speak across the globe, across the seasons and across species.

A new and endearing series, displayed en masse, comprises works featuring bush babies and lorises, painted early this year. Personally, I prefer the monkeys and gibbons, which appear interspersed throughout the hang, their postures aping (excuse the pun) their human counterparts: hugging their legs, heads hanging – is it just the human condition, to be plagued by doubtful questions of meaning and purpose, or does this state of being reach further across the animal kingdom? How true are John Donne’s words: “No man is an island / Entire of itself, / Every man is a piece of the continent, / A part of the main.” Are we not all ultimately alone in the jungle?

The back wall of the gallery is hung salon-style, like the Royal Academy Summer Show, only with work of a higher and more consistent quality. It is hard to tell which works are new and which date from two decades ago. Solo shoppers wander amid worshippers from St Paul’s; solitary cleaners work alongside cowboys on horseback. Shadowy figures cast shadows of their own, disappearing behind the veils of paint and layers of snow and rain – indistinct, yet quite certain. Larger works with thick, sweeping strokes, and watercolour sketches, done in haste, with just a few strokes each. Hamilton’s general palette of mauves, purples and teals reinforces the feeling of weightiness, shadow, gloom and dusk drawing in – it also makes the light-filled works all the more blinding and powerful. Hot deserts create a mirage: the specks and blots appear to be floaters in the viewer’s own field of vision. Often radiating from somewhere within, light itself seems to hide the figures which emerge or, more often, seek to submerge themselves in its golden blanket.

As well as solitary figures, Hamilton paints huge crowds: dining rooms and beaches, seething with swarms of people, claustrophobic in the extreme, clustering like cells. Here, if anywhere, however, the sense of isolation proliferates. The figures are overwhelmed not just by the dark spaces or the sharpness of the light, but by the presence of each other, repelling more than attracting, spiralling in ever decreasing circles, closing in on themselves. It is as if Hamilton has reached the same conclusion as Camus: “As a remedy to life in society I would suggest the big city. Nowadays, it is the only desert within our means.” Hamilton’s works capture the inescapability of the human condition, its loneliness and its Sisyphean repetition. We are trapped both in – and as – atoms in space. 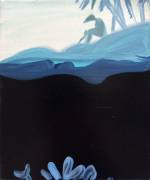 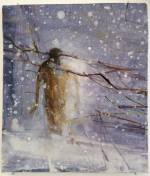