Ongoing excavations of two rediscovered cities have shone light on a rich era in Egyptian history, and form the backbone of a fascinating exhibition 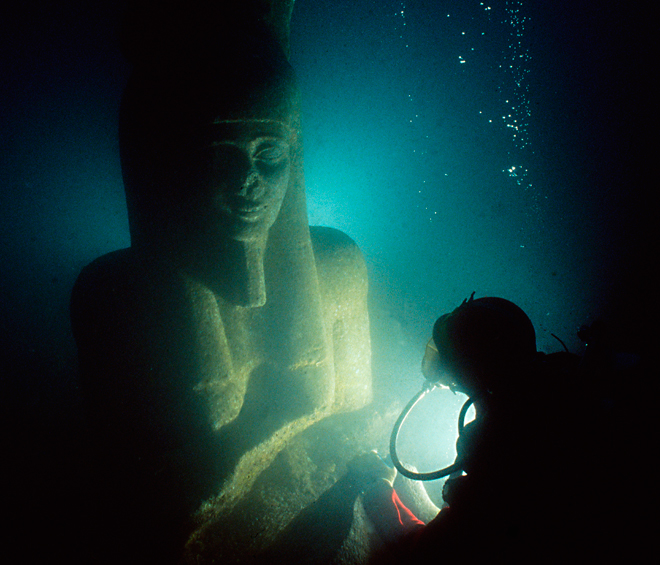 For centuries, two cities lay lost beneath the waves, known only from ancient texts and Greek mythology. Helen of Troy and her lover Paris are said to have fled the jealous Menelaus to the Canopic mouth of the Nile where these two ports once rose out of the sea as Venice does today. But like Venice, they were built on unstable foundations and eventually sank out of sight, a process expedited by a series of earthquakes and tidal waves. And so the physical remnants of Thonis-Heracleion and Canopus remained obscure for almost 1,500 years.

Sightings by a Royal Air Force plane surveying the region in 1933 triggered some initial investigations, but it was not until 1996 that an underwater survey by the European Institute for Underwater Archaeology (IEASM) revealed solid evidence. In the 20 years that have followed, tantalising finds and revealing inscriptions have started to give up the secrets of these submerged cities.

Thonis-Heracleion and Canopus were thriving thoroughfares, gateways to the Nile from the Mediterranean. They were founded before the Greek “liberation” of Egypt from the Persians in 332BC, but it was that event, and the subsequent Ptolemaic dynasty, that is the main focus of the exhibition. It is not difficult to understand why. The centuries following the Greek conqueror Alexander the Great were a fascinating time in Egypt, a fact borne out by references to the incestuous and murderous Ptolemys, the passions of Antony and Cleopatra and the tragedy of the Roman emperor Hadrian’s ill-fated Greek lover Antinous.

When Alexander the Great died, the rule of Egypt was handed to his general, Ptolemy, who became a de facto pharaoh. So started the Ptolemaic period in ancient Egypt. The vast Egyptian temples and comprehensive pantheon of gods echoed the Greek’s own modus vivendi and just as Alexander the Great had embraced Egypt’s traditions, so too did the Ptolemaic rulers that followed. Their colossal statues look unmistakably Egyptian, from their royal dress to their stoic, striding stance.

The hybrid of Greek and Roman conventions reaches a pinnacle in a stunning statue of Arsinoe II, sister and wife of Ptolemy II. Sadly only the torso and legs have survived, but this cult figure from Canopus beautifully demonstrates the dignified aspect of an Egyptian queen draped in the transparent fabric of Hellenistic Greek statuary, which clings revealingly to her idealised form. She is Isis and Aphrodite sublimely rolled into one.

While not all the finds in the exhibition were excavated from Thonis-Heracleion and Canopus, they do add to the story. Many come from the nearby city of Alexandria, which eventually eclipsed Canopus as Egypt’s main seaport. One such artefact is a majestic Apis bull with a sun disk displayed between its horns. He is a handsome fellow, perfectly proportioned and as fresh looking as the day he was made.

This exhibition is remarkable not just for the provenance of so many of the items on display, but for the stories they tell about the lure of Egypt throughout the classical world. Much is made of Osiris, god of the underworld, and the celebration of his Mysteries, which included the procession of torch-lit barges along the Nile. It was during one such occasion that Hadrian’s lover Antinous drowned. Antinous was subsequently deified and venerated as the god Antinous-Osiris and a city was built in his name at the site of his death. A small statuette depicting the tragic youth in traditional royal Egyptian dress is displayed near the end of the exhibition.

While the narrative of liberation, cultural respect and religious tolerance seems a little forced – and perhaps rose-tinted by our modern sensibilities – it is clear that this part of the Nile was a very special place. Throughout the exhibition eerie footage of divers shining their torches on the ancient stone faces of gods and pharaohs drive home the incredible sense of discovery surrounding these cities and their colourful pasts. But archaeologists have only scratched the surface. There is much more left to discover. 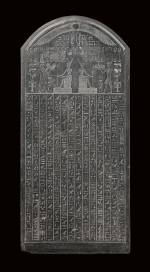 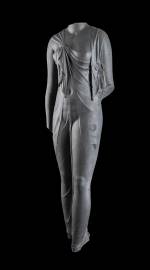 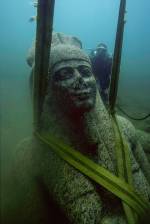 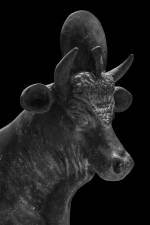 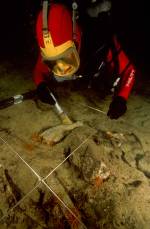