Sofia Borges: ‘Photography can be used as a tool to mould our sense of reality’

Sofia Borges: ‘Photography can be used a tool to mould our sense of reality’

The artist subverts photography, as she strives to ‘rub out meaning’. Instead, she explains, she is interested in the things that are lost, denied and corrupted in the transposition from object into image, and from image into reality, and from reality into meaning 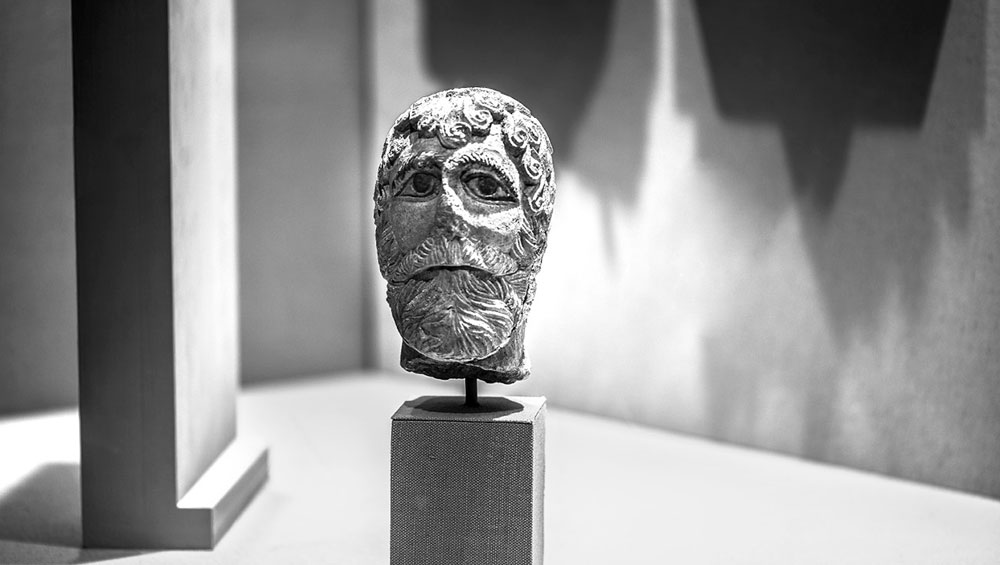 Sofia Borges (b. 1984) is a Brazilian visual artist who turns her camera on museums, photographing their objects, surfaces and displays as a form of research into acts of representation. Whether scrutinising palaeontology museums in France or zoological museums in Brazil, Borges’s subject remains the same: artifice, mimesis, things caught in the act of representing other things. Borges studied visual arts at the Universidade de São Paulo and has exhibited widely in eastern Europe and the Americas. She has won several awards in Brazil, including the 2009 Porto Seguro de Fotografia; more recently, she was awarded the 2016 First Book Award in the UK, which culminates in the publication of a photographic work conceived, first and foremost, as a book.

I spoke to Borges about her new book, The Swamp (MACK, 2016), her research into the philosophical properties of images, and the flat, silent world of the photograph.

Izabella Scott: Would you describe the museum as your muse?

Sofia Borges: I think my real muse is more of a myth, because what I seek to photograph is a state rather than objects, a state that might be inhabited by things, but is not the thing itself. The muse I speak of can be found anywhere, and not necessarily inside museums: at the beginning of my practice, for example, I photographed myself. But I find that in museums or zoos and other types of research centres, objects sustain very specific states and can hold in suspense many different layers of time, history, use and symbol at once. It’s easier to recognise those layers in an object that has already been separated from reality, and in museums, these objects – whether words and drawings in displays, plastic plants in dioramas, fossils in cabinets, portraits inside pictures and pictures inside paintings – are displayed precisely to hold these states of meaning. In museums, objects act out meaning with a specific purpose, and in this condition it’s easier for me to separate those states and so to evoke my “muse”. Ultimately, I try to show the myth itself: the myth of meaning, the myth of comprehension, the myth of reality.

IS: Is this process a philosophical questioning of photography, of the medium itself?

SB: I often think of my photographic research as a philosophical practice, where I question the act of depiction, the creation of meaning and modes of comprehension. I use photography as a tool to dissect objects and to anatomise their ability to represent. In my photographs, I try to show these objects as “dead”: without the living action of meaning something.

It was only recently that I finally understood that my interest in photography comes directly out of the fact that photographic images are so akin to the way we see the world. It’s such a simple thing to say, but it’s because of this that photography can be used a tool to mould our sense of reality. I avoid using photography to describe forms, follow narratives, or to demonstrate meanings; instead, I use it to demonstrate abstraction. I should say, this is not abstraction in formal terms (and you could argue that there is no such thing as an abstract photograph, since everything is representative of form). What I seek is abstraction in terms of meaning and in terms of comprehension. Since photographic images are just so similar to how we see the world, it’s harder not to understand them. I find that when I manage to show a depiction of “reality” that is refusing to deliver a defined meaning, I get closer to the heart of the philosophical problem – that is, the impossibility of ever fully understanding reality itself.

IS: You were the winner of the 2016 First Book Award with your photobook The Swamp, which has since been published by MACK. Did the work begin as a book?

SB: The Swamp is the culmination of seven years of research. The book itself came together remarkably quickly. I did it in about a week, but it took seven years of thinking, writing and looking endlessly at those images to be able to gather the book together. In the book, I tried to deliver everything I’ve learned so far in photography. Like a poker game, I put everything in. As with my exhibitions, I tried to steer away from narrative and thematic concerns. Instead, certain formal and philosophical relations arrange the flow of images, and there’s a minimal text threaded through. I brought together many types of images: a book of aliens, each one from a different galaxy. It was challenging to put together such distinct images, and I wanted every one of them to be strong enough to erase from your mind the previous one in the sequence. The text appears broken up between the images, and it is the only thing that allows for pause, and lends a sort of timing to the images. It is difficult to read, and I wanted to point towards something that the images already try to deliver: failure. The failure of language, of continuity, of comprehension, of meaning itself.

IS: On the cover of The Swamp is the statement: “Images do not exist.” Does this statement constitute a philosophical standpoint? Is it the culmination of your research?

SB: This provocative statement relates to the Greek concept of aporia, which is a philosophical puzzle made up of equivalent contradictions. In other words, aporia is an irresolvable, internal contradiction within an argument. I use the swamp itself as a metaphor, a place of contradictions where images have lost their legibility and their form – as if they’ve sunk into the mud. These are images in a slippery state; images that you can’t comprehend.

IS: Are you more interested in images that remain readable through the transposition into a photograph, or the ones that get corrupted?

SB: I’m interested in images that are completely readable in terms of form (ie you can recognise what is) but that at the same time are corrupted in terms of “meaning”. I believe that’s the condition of existence itself, and that language arises only from the ability to perceive meaning in terms of difference, not unity.

IS: That sounds akin to a post-structuralist reading of language, where language is understood as an approximation, and that meaning is built from difference. We are limited by what language allows us to say, and there is so much that is inexpressible …

SB: I’m always interested in the failure of language, and the notion of the inexpressible. In Roland Barthes’s 1967 essay The Death of Author, he writes something about Greek tragedy that I’ve always found compelling. He says the language of Greek tragedy is rooted in ambiguity and saturated with double meaning. The very basis of Greek tragedy, he argues, is characters that talk and misunderstand each other in a language that’s full of double meaning. The characters perpetually misunderstand each other, and the dramatic action comes directly out of this double meaning. Messages are lost, communication fails, and out of the ambiguity of language comes tragedy. I often come back to this text, and it was a particular influence on a show I curated last year called No Sound.

IS: The indulgence in double meaning, and in ambiguity, goes against the grain of what’s often understood to be photography’s basic function: to pin things down. Historically, photography has been used to measure and to classify, to make the world materially manageable – and this is especially true in a museum such as the Gallery of Palaeontology and Comparative Anatomy [part of the French Natural History Museum], a museum that features in your work. In your concern with tragedy and failure, are you trying to undermine the systematic side of photography?

SB: It took me years to understand why I was using photography as the central medium of my work because I’m not interested in what it’s so good at doing – controlling, classifying and so on. Nonetheless, something fascinated me about the medium and drew me in. This fascination comes, I think, from photography’s particular relation to reality. On the one hand, it’s so akin to the way we see the world and we’re always falling for images, thinking they show us something “real”, something that happened. But at the same time, an image is a flat, silent world, and because it’s authored, there will always be a degree of subjectivity. I’m interested in the things that are lost, denied and corrupted in the transposition from object into image, and from image into reality, and from reality into meaning. What really attract me are images suspended between legibility and abstraction.

IS: The form of the book often generates meaning, simply because it unfolds in sequence – one page after the next. Did you use this structure, or fight against it?

SB: I pushed words and images towards an abstraction. On one level, the images relate to one other, and the sequence is carefully chosen so that one image leads to the next. In this way, you might expect there to be an accretion of meaning, but, in fact, the very opposite happens – you get disoriented. This is because I’m intentionally messing up the sign system. I’m isolating images, isolating words, taking them out of the tapestry and forbidding a relationship between one image, or one phrase, and the next. I like to think of the result as an “interpretive hole”. When meaning is forbidden, what happens in its absence? My work is not about answering these questions necessarily, but finding the problems, identifying the voids.

IS: Is the “interpretative hole” you speak of a way showing the flaws in the system? Pushing it until it breaks?

SB: What I’m trying to do is to make you forget the way you’ve learned to read images, and doing this through an act of erasing connections, of rubbing out meaning. I want to make you go momentarily blind – and then see what happens after.

IS: You mentioned working as a curator, particularly in relation to a curatorial project at Galeria Millan, No Sound (2015). Was this also a philosophical enquiry of sorts?

SB: I was thinking of the exhibition as an active area of investigation. For No Sound,I selected a group of artists, mainly from within Brazil, and, over a series of days, we began a set of investigations into their artworks and images via four different processes. One was to use fire, and we burned objects to see what happened to their meaning once they were extinguished, often remaking the objects, burning them, remaking them. Another was using a stage, a velvet curtain for objects to pass through – because once you put something on a stage, it immediately become representative: the act of mimesis is triggered. Yet another was to dig holes in the gallery floor, and to throw the objects into them. I think of No Sound as a workshop, exhibition and research practice all rolled into one.

IS: Do you think of yourself as a researcher before being an artist?

SB: I don’t think it’s possible to make a distinction between the two. 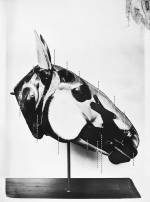