From sex dolls to data harvesting, the artist lays the blame for the digital-human disconnect squarely at our door, with our increasing willingness to allow companies access to our personal data 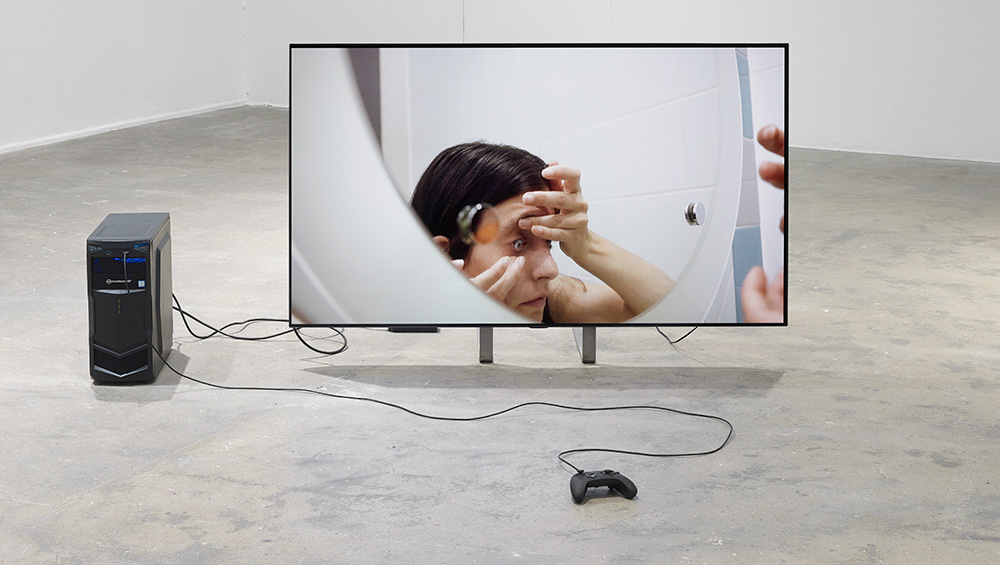 There are certainly more pleasant ways to spend a Saturday afternoon than watching a German worker cleaning up the latex sex doll that has just been visited by a client. But artist Sidsel Meineche Hansen (b1981, Denmark) doesn’t do pleasant. Her work is all about making us engage with the forces of darkness around and within us. From the corrupt and greedy data barons who are harvesting our every mood, message and movement via our dependence on apps or social media to the government or intelligence gathering departments piggybacking on their technology, what she is really showing us is that it is we who are to blame for this digital-human disconnect. Her works for this show, as ever, highlight the pathetic gullibility of human nature that has us mistaking social-media likes for popularity, virtual friends for an actual social life – or plumping for a robotic voice or the soft touch of latex instead of real intimacy. 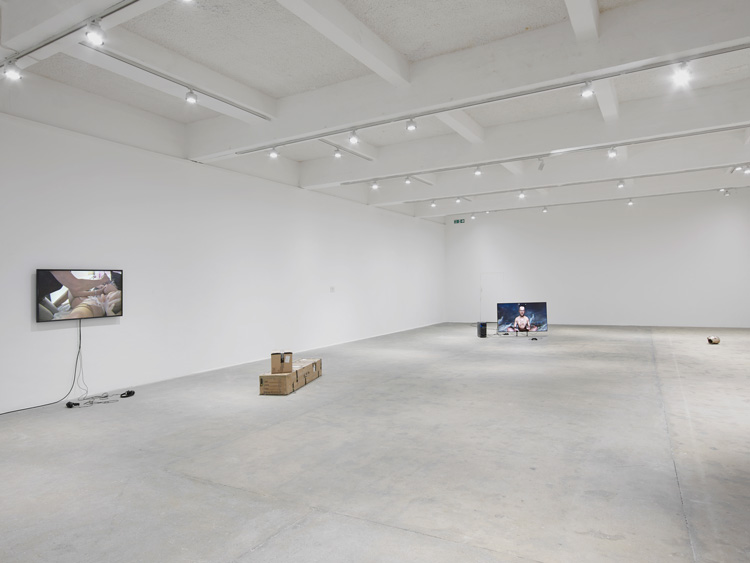 As the aforementioned worker sets about this spreadeagled sex doll with her bucket of disinfectant sprays and wet wipes, there is a strange tenderness in her movements, a degree of care that is quite striking, as she discusses the gratitude her clients express at having been given an opportunity to vent their anxieties or stresses in her perfectly clean, seemingly comfortable facility. Hansen’s camera simply records - a dispassionate observer - as she props the prone, “used” doll up again, adjusts her lolling head, pats down her hair and retouches her makeup, after slipping off the soiled undergarments and replacing them with clean ones, gently cupping the huge, jelly-like boobs with the frothy, white flimsiness of her bra. And in that dispassionate and frank appraisal is the power of the work. 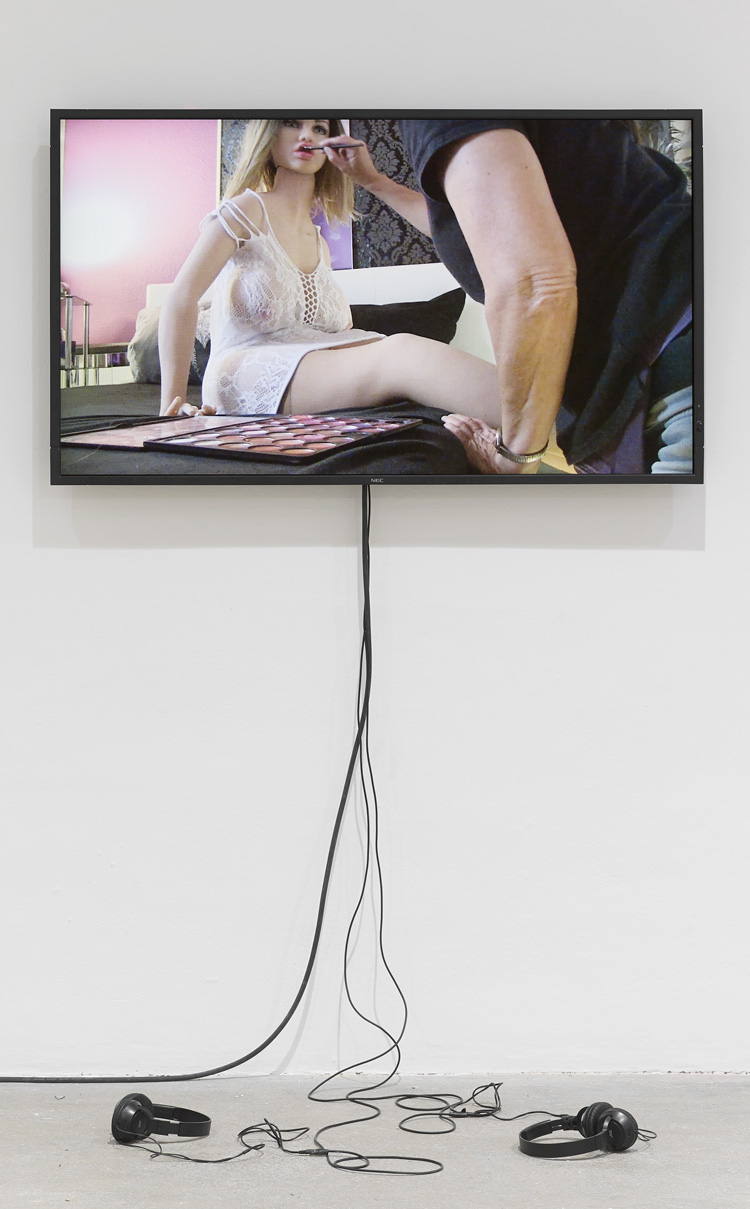 This 13-minute piece, Maintenancer (2018), is part of Meineche Hansen’s 2018 Pre-Order l-III series, documenting the transition to post-human prostitution - a transition about which, no doubt, there is much to be grateful, especially for financially and emotionally vulnerable young women, even if it does nothing to address why men feel entitled to enact their violent fantasies on dolls as proxies for real women. Here, it is shown on a loop with Love Doll Resurrect (2018), a 57-second stop motion digital video. A nearby stack of boxes (which I am afraid I mistook for a seat) are another work: Untitled (2018), and presumably the original packaging for these sex toys, emblazoned with their source: WM Dolls, Songshan, China. 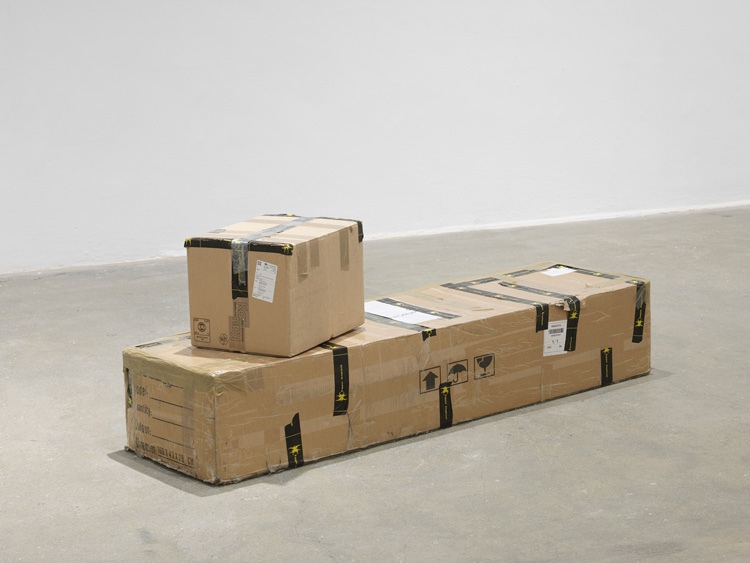 The major new work for this Chisenhale commission is End-Used City (2019), a 12-minute video, using gaming technology to allow audiences to select and view three short videos. The triggers are embedded in the eyes of an animated CGI figure, who crouches, up-close on the screen, against a dystopian urban background. His body is covered, as if by tattoos, with portraits of the key figures from the global tech-industry, those – we are told in the accompanying handout – “whose products and accompanying end-user licence agreements, set the terms and conditions of ‘surveillance capitalism’”. 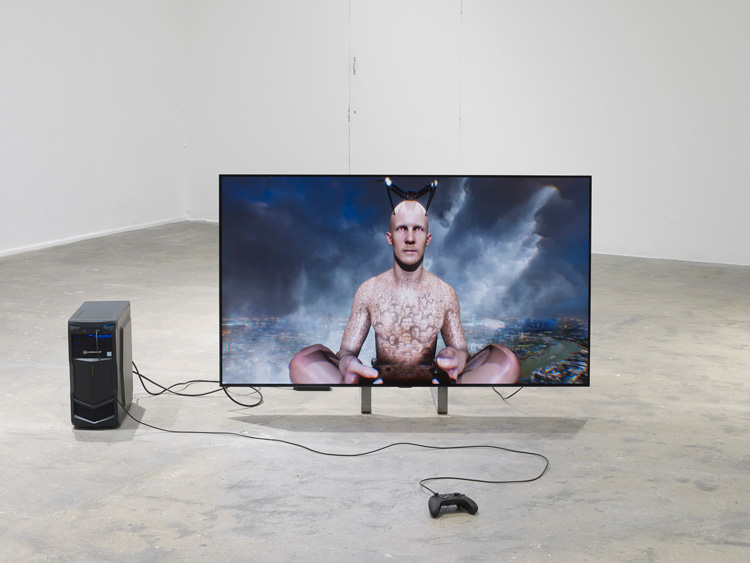 You can either use the games console to select the videos or simply trigger them in sequence. Starring a non-actor, Anna Smith, one film shows her strolling through a bleak, inner-city landscape (unmistakably London), exploring the underground system, traversing the bland aisles and escalators of a shopping mall, before popping surveillance contact lenses into her eyes.

In another, we observe her lying lethargically on a sofa before launching her own surveillance drone, which wobbles out of her apartment window to go off on its enhanced tracking adventure. And we also see the concierge of a residential tower block tracking a woman’s movements by CCTV as she enters, explores and then leaves an apartment block. The casual, matter-of-fact approach of this female caretaker, as she swivels the CCTV cameras, positioned on every corridor, in the lift, and on the exterior, to follow her “prey”, is chilling. 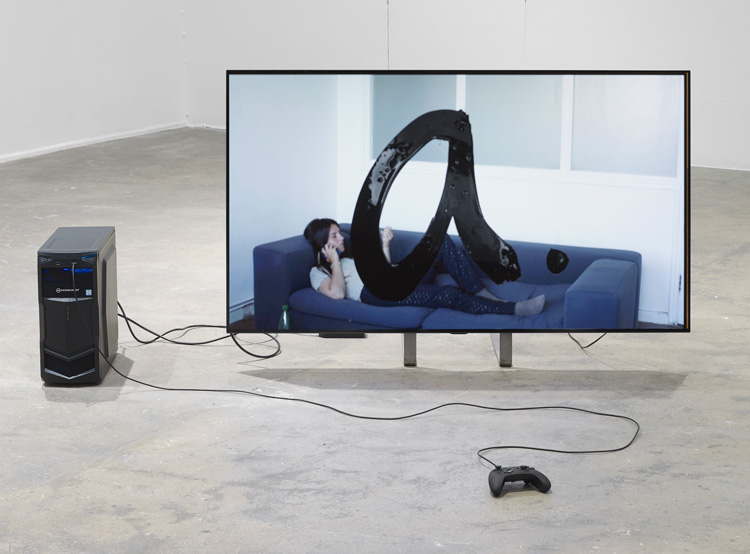 But the disquieting experience of simply witnessing these works is nothing compared with the deeper implications of the technology we now take for granted, as Meineche Hansen reveals in an illuminating conversation with curator Ellen Greig, printed in the gallery handout. Meineke Hansen’s practice includes deep academic research, as well as teaching (at the Funen Art Academy in Denmark, Goldsmiths, University of London and Central Saint Martins, University of the Arts London, among others). The research often takes precedence over  - or completely eclipses – the work; she set up a research collective, Model Court, in 2009, with Lawrence Abu Hamdan, Lorenzo Pezzani and Oliver Rees. The Maintenancer work came out of her learning about the first-generation sex robot, called “Harmony”, which combined a chatbot, set into a lifelike head, with a voluptuous silicon body. By downloading the software to run the Harmony application, the end-user agreement meant that the user consented to all their personal data (presumably from the interaction with the doll) being gathered by the manufacturer; clearly a horrifying abuse of privacy while conducting the most private of acts. 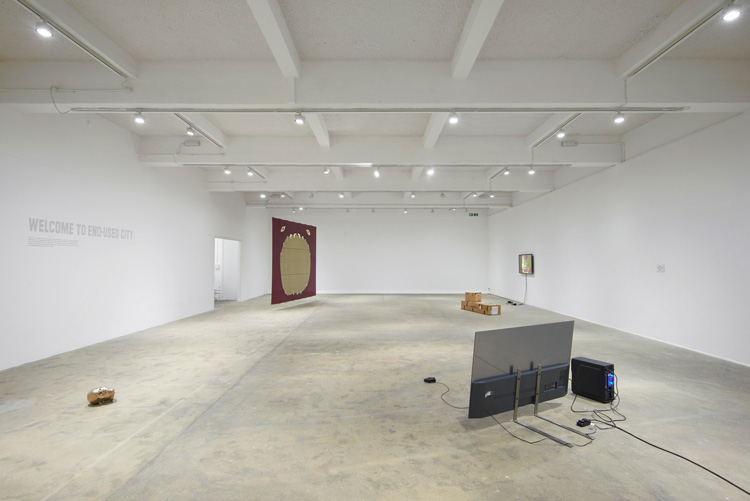 Citing Shoshana Zuboff’s book The Age of Surveillance Capitalism (2018), Meineche Hansen elaborates on how the tech sector is harnessing our human desire to feel that we are living our lives “effectively” – from exercise routines to diary-keeping, navigation to food-consumption. What the resulting work conveys is just a small part of how this might be impacting on levels of personal privacy, security and psychological wellbeing.

In End-Used City, she says: “The city is a machine that collects personal data about the residents … it is set in London in the present day because this is pretty much what is going on already.” 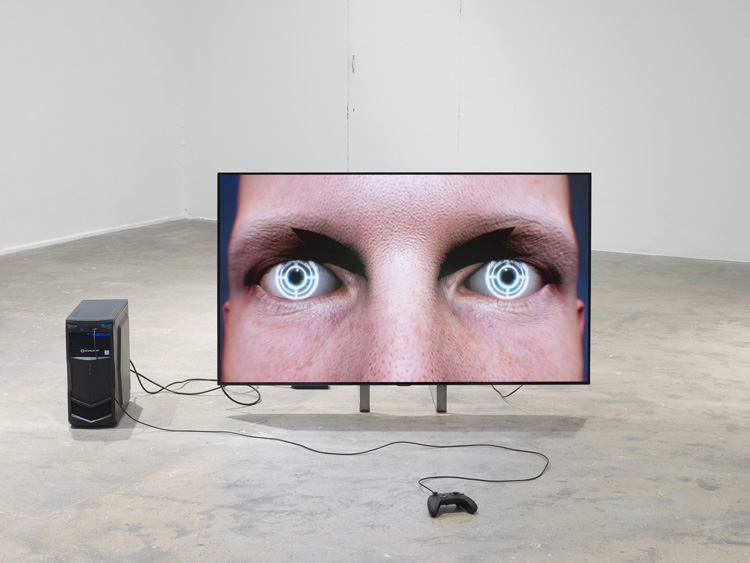 However, much of what Meineche Hansen wants to tell us with this new work is far from apparent to the casual (or non-gamer) viewer. What we would not know, unless we read the interview, is that the animated figure who hovers over London, wearing a drone as a crown, is a reference to Thomas Hobbes’ book Leviathan (published in 1651), the frontispiece of which features an engraving by Abraham Bosset, composed of 300 or more humans, by way of revealing that “the people are represented by their contracted leader, who draws his strength from their collective agreement,” as Meineche Hansen says. Furthermore, the words with which this figure introduces the game are taken from an NBC interview with surveillance technology specialist Alex Karp, the founder and CEO of Palantir Technologies, explaining the role that his company’s software plays in supporting national military intelligence across 30 different nation states.

While the artist’s concern is genuine, expertly researched and completely justifiable, the work alarming and timely, her immersion in the topic may be so great that she has trouble identifying which of the many layers of meaning and significance she has embedded in it will be in any way intelligible to the average gallery visitor. I did not notice, for example, the ink drawings that are overlaid on to the three different films: the smart phone “flight mode” symbol over scenes of London’s underground; an angry face of a passenger on a “Boris bus”. Neither did I spot the acronym Ocean, which is apparently a reference to the “big five personality model” employed by the analytics company IBS Intelligence, via algorithms, to identify consumers and voters.

However, any confusion is soon cleared up by the interview with Greig. For example, the “flight mode” symbol relates to a fact that had completely escaped me – as no doubt it has millions of others – that Transport for London, in providing free wifi underground, sees the data supplied by your use of its network as its to harvest; apparently a notice did appear at some point, suggesting that those travellers who did not wish to be compliant should switch their phones to flight mode. Being a non-gamer, I also did not recognise the quote at the end of the “game”, “You are all breathtaking”, which is taken from a statement made at the end of a gaming convention, by actor Keanu Reeves, introducing Cyberpunk 2077, a game in which he voices one of the main characters. 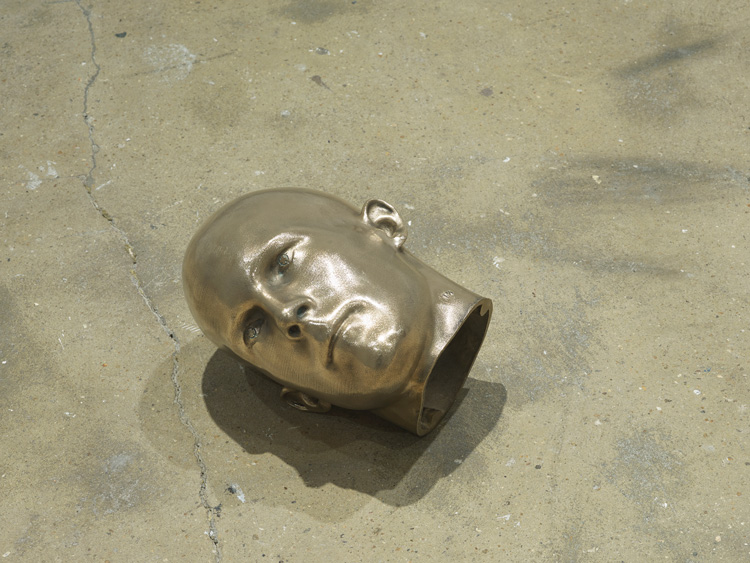 Meineche Hansen manages to convey so much more with much less through three remaining works. Public Sculpture (2019) is a 3D printed head cast in bronze, which lies close to the End-Used City monitor (the implication presumably being that the data that allowed this head to be digitally produced is now publicly available). 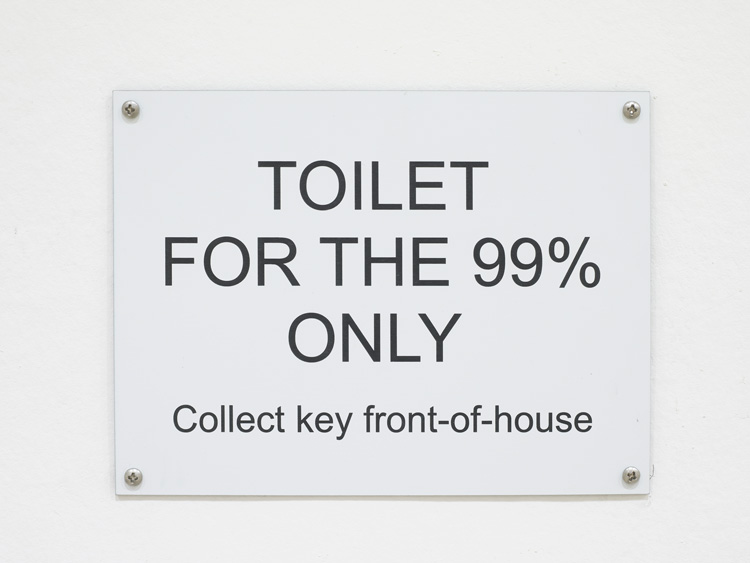 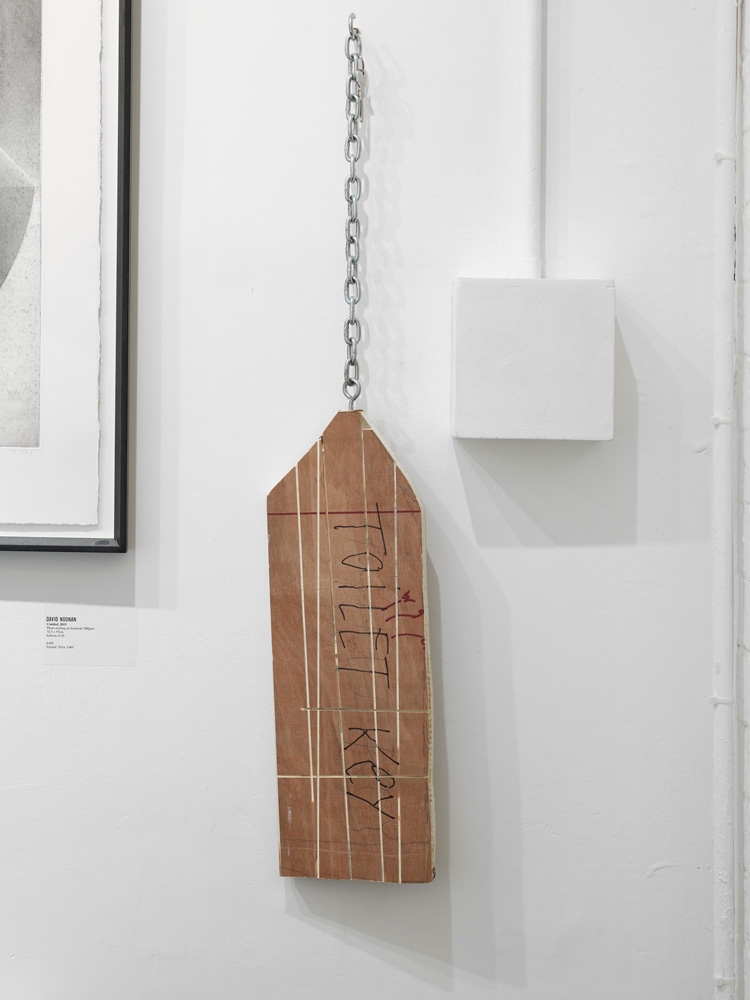 Keychain Secure (2019) is a door lock, key and large wooden keychain with which visitors have to unlock the gallery’s toilet door, should they wish to use it, in a tongue-in-cheek riff on how global coffee chains such as Starbucks now ensure that only paying customers can use their toilets (either with a key or by punching in a security code to the lock). An accompanying notice in the toilet declares: “Toilet for the 99% only.” 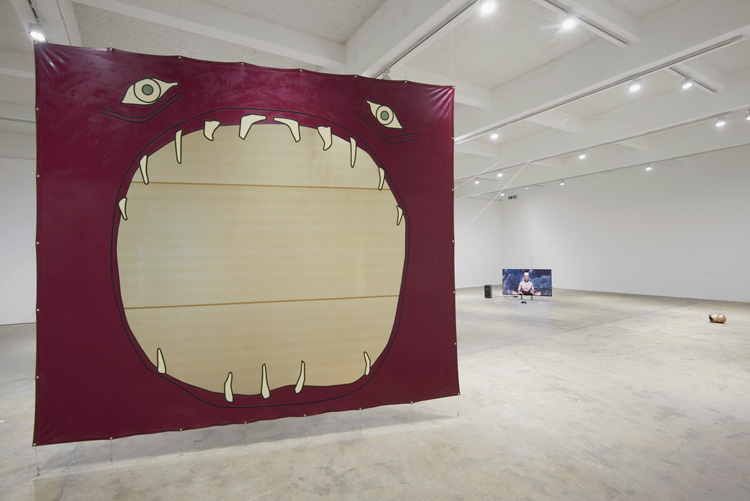 The first - and final - piece we encounter is Hellmouth (To Madame) (2018), a large, latex screen installed at the entrance to the gallery space. The idea for this, says Meineche Hansen, was inspired by a medieval theatre prop that depicted the entrance to hell in order to promote Christian values. It is an ancient motif said to be one of the earliest representations of a “vagina dentata”, says the artist, “based on the belief that the orifices of the female body are entrances to hell”. This particular hellmouth is double-sided, she says – to “negate the idea that hell is on the other side”. Clever. And this time admirably succinct. 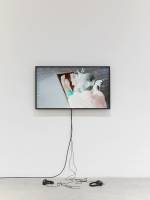