Paris comes to west London as the Griffin Gallery hosts an exhibition of works by the students of l’École des Beaux-Arts. So what is it like to study at a French art school?

It is always exciting to see the next generation of hopefuls emerging like fragile, fresh-winged butterflies from the safe cocoon of art school. Many will change direction; some will abandon art altogether – it’s a tough business, after all. But a few will triumph as fully fledged artists, and some may even go on to enjoy international reputations. But from the day they start studying, one of the biggest pressures on artists is the “concept versus skills” conundrum. Those taught at mainstream UK art schools by teachers of a certain age will often be told that ideas are more important than the finished piece. Technical ability is invariably sacrificed at the altar of postmodernism by a generation of tutors who studied in the long shadow of Marcel Duchamp. At least, that was my experience, and I was not alone. So I was keen to talk to French art students at the Griffin Gallery in London to see how, or indeed if, teaching differs at France’s premier art school, l’École Nationale Supérieure des Beaux-Arts.

The Griffin Gallery was set up to help develop the careers of emerging artists. It shares a building with the headquarters of Winsor and Newton, Liquitex, Lefranc & Bourgeois and Conté à Paris, all operating under the banner of ColArt, which owns not only the gallery but also a laboratory and purpose-built artists’ studios onsite. This exhibition is part of a four-year long collaboration between ColArt and l’École des Beaux-Arts, and this year sees the arrival in London of some of Paris’s most promising emerging artists. The emphasis is placed firmly on materials and processes, with the aim, as curator Becca Pelly-Fry puts it, of demonstrating a balance between technical skill and conceptual rigour.

A few pieces in this exhibition illustrate this point beautifully. “To look just at this one on the end,” Pelly-Fry says, gesturing to a simple, flat blue shape painted on an unprimed canvas, “you might be a little nonplussed, but when it is exhibited with the others, it demonstrates real confidence.” She is talking about Théodore Parizet’s work, which is a perfect example of what the exhibition is trying to achieve. In his abstract paintings, Parizet combines an intimate knowledge of colour with an understanding of the materials he chooses, not to mention a strong link to the principles of his artistic forebears. Rothko, he tells me, is a big influence: “He knows how to work with space. He wants to make a door, an idea of wanting to cross into another space.” Parizet’s canvases combine both acrylic and oils, exploiting each material’s physical properties; the way oil soaks into a canvas, or the way acrylic paint forms a crisp edge when it dries.

Painting dominates this exhibition. There is an atmospheric piece by Nathanaelle Herbelin called Tippy, which takes the form of a subtly painted image of a child’s tent with a huge amount of attention paid to colour and tone. It is a calm, understated piece, but also full of mystery. The tent stands empty and alone, an item without context, but one imbued with a strange presence of its own. Is it a mysterious metaphor or a portentous totem? Or perhaps it was the shape alone that appealed to the artist. Sadly, Herbelin was not available to ask, but in some ways the mystery is part of the painting’s charm.

Another empty structure forms the focus of Ségolène Haehnsen’s painting Un Vendredi (One Friday). A small, windowless shack stands in an arid landscape. Outside, a row of little pink shoes hints at a narrative. This is a personal piece that centres around Haehnsen’s daughter. “Everything started with these shoes,” she told me. “I have a little girl and she inspired me. The house just appeared in my mind. It’s like when you’re alone in your studio or in a theatre, when you have only a very few elements of the world.” I asked Haehnsen whether she had been taught to paint at art school. “There is a school of painting, but I’ve never been there. I was very against authority. You have to find your own technique, which makes your painting yours. Painting is about something very hard and you have to find the solutions on your own.”

This exhibition, then, represents a range of approaches and processes. Marina Le Gall’s Renard qui Marche (Walking Fox) stands nearby, a ceramic, cartoony sculpture that seems frozen mid-stride. It is paired with a painting by the same artist, entitled Lignes Vertes (Green Lines), in which a woodland scene is rendered in a uniform bright green. There is a lot to take in in this small exhibition, which covers almost every surface of the gallery. The buttery paint of Laura Garcia-Karras’s abstracts spill out on to the wall itself, Ulysse Bordarias’s latex Tapis Directionnel (Directional Carpet) occupies a space on the floor, and printmaking is rather ingeniously represented as an installation with a range of examples exhibited on a wooden construction that fits together like a jigsaw.

Such a variety of approaches leads me to ask Pelly-Fry the question that has been on my mind since I entered the gallery. How does teaching at l’École des Beaux-Arts differs from that at UK art schools? “From what I’ve seen at Beaux-Arts, the teaching is very much focused on the artist at  the head of each studio,” she tells me. “Students will be taught, and therefore influenced, by the particular style and interests of their studio master, which seems to lead to very close relationships between student and teacher.” She goes on to say that students in France have a respect for art history. “French students are very well versed in the art historical context. In the UK, I think art education is much more free-flowing, based on academic and philosophical thinking and influenced by a larger number of teachers, visiting lecturers and tutors.” There are no plans to send London’s art students to Paris on the same scheme just yet, but Pelly-Fry doesn’t rule it out as a possibility for the future. Perhaps students on both sides of the English Channel (or La Manche, if you hail from France) will one day enjoy the opportunity to exhibit outside their own country so early in their careers, with a little help from Griffin Gallery. 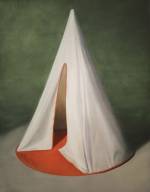 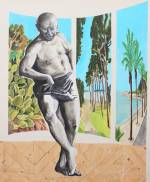 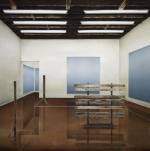 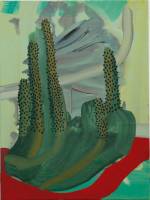 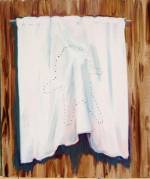 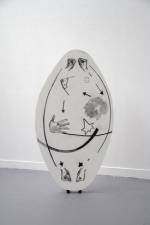