A suite of works by the New York painter form a tribute to the stars of country music, the power of celebrity and the American imagination 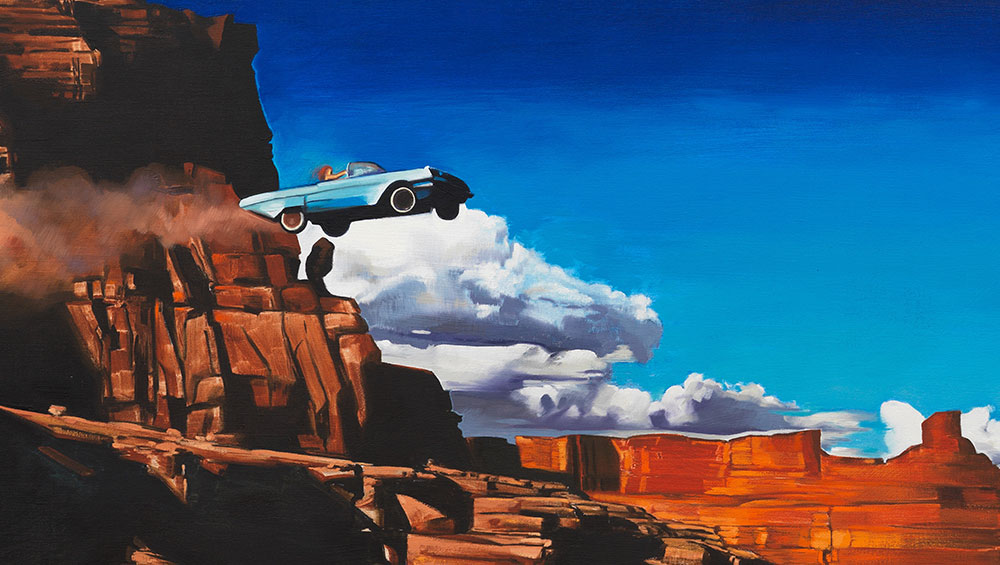 Last year, the New York-based artist Sam McKinniss considered leaving the city. I don’t know if he made it. But on the evidence of Country Western, his exhibition of new paintings at Almine Rech, London, the sort of countryside he was contemplating owes more to the American imagination than to rural realities. One of the few landscape paintings on show, Grand Canyon (2021, as are all works in the exhibition), purports to depict the most hallowed natural site in the entire country. But McKinniss has not only captured the mighty ravine. A blue Ford Thunderbird rocks through the sky, trailing exhaust fumes. Grand Canyon is a reproduction of the final scene in Thelma & Louise. 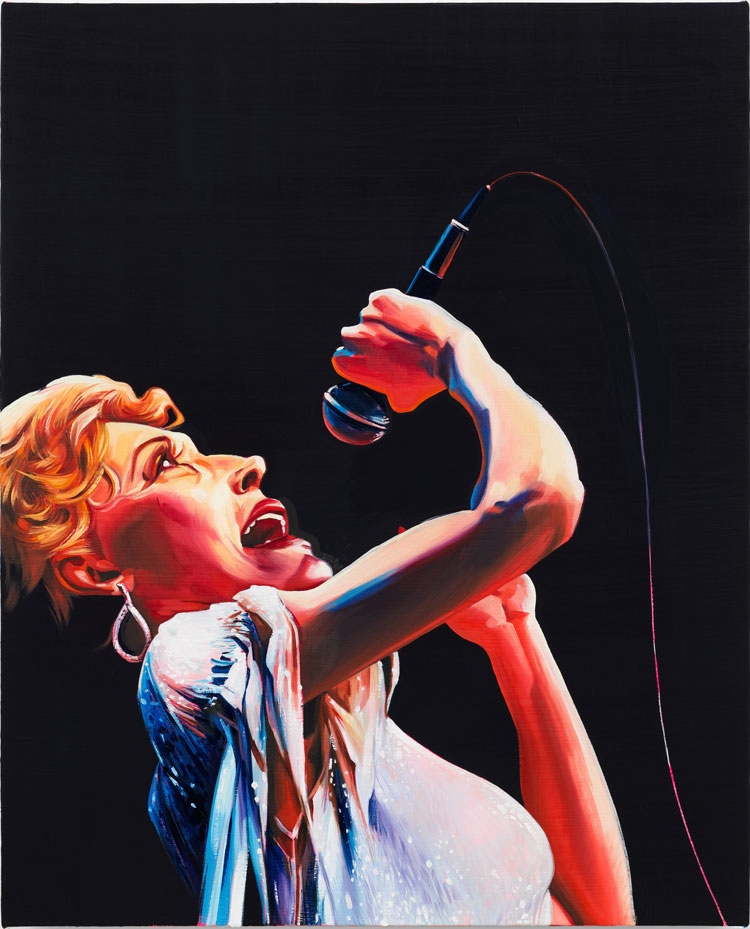 McKinniss is best-known for his portraits. The majority these works feature not the country itself, but the singers who romanticise it. We have the curly topped Lyle Lovett, with a frenzied grin. Willie Nelson smiles warmly beneath a top hat, with the desert to his back. The ill-fated Tammy Wynette bends back her head and belts into the mic, rapt in ecstasy. And then there is Dolly Parton, who appears twice: once holding a kitten, in saccharine ingenue mode, and later in a sparkling, padded-shoulder pantsuit, with half-straight, half-curly hair that dangles like an extravagant jellyfish. Wynette aside, there is something nervous about all these smiles, which can seem plastered on. “Face as front of shop,” writes McKinniss, “Parton’s teeth look bulletproof to me.” 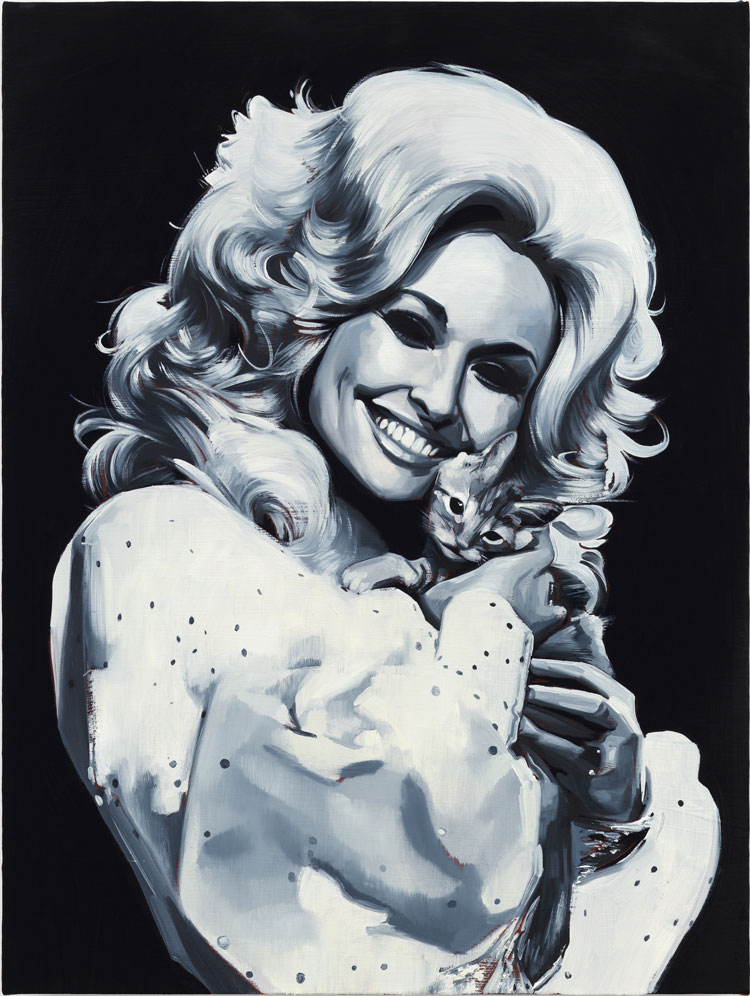 Country music is awash with contradictions. Inextricably American, it happily allows talented foreigners in: two of McKinniss’s paintings depict crossover success Shania Twain, a Canadian. But it also has a continuing tendency to exclude those who are not white and straight. While pop music often deals in passages of transcendence, rays of lights and looks of love, country favours the domestic, the nine-to-five; it is unsurprising that country radio has surged in popularity during the pandemic, with its nostalgic, unchanging warmth and stable pacing. Yet parallel to this – and the plain, plain-clothed men eulogising booze and trucks that dominate much of the modern country charts – the genre has its own campy glamour, all rhinestones and Nudie Cohn suits. 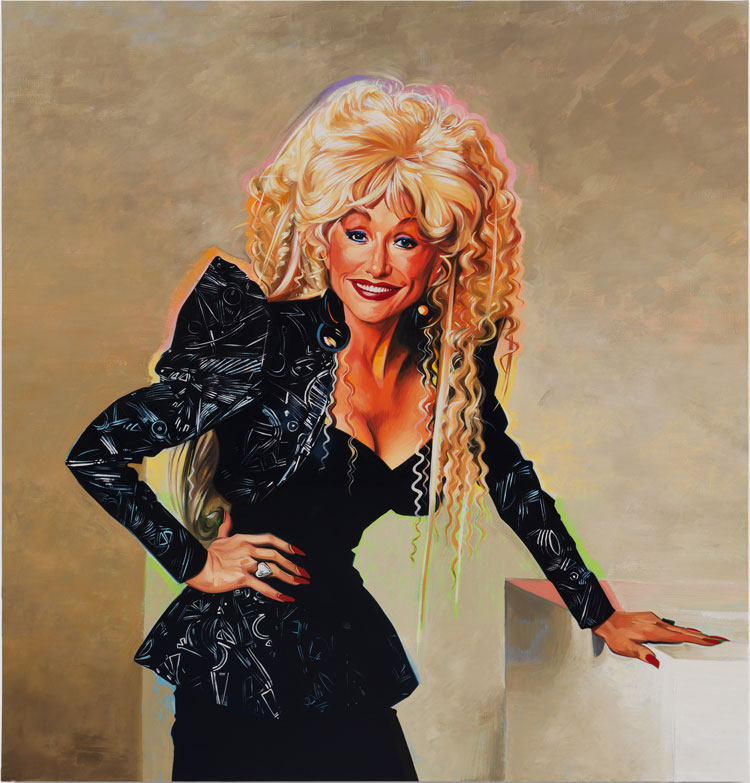 It is this side of country that appears to fascinate McKinniss. It is also the side that is most palatable to outsiders. With the exception of Wynette, whose signature tune Stand By Your Man has long been derided as antifeminist, McKinniss avoids the country’s more contentious branches. These have come under an increasing spotlight since the presidential term of Donald Trump, some of whose rhetoric was tailored to appeal to country-listening demographics. In February, Tennessee singer Morgan Wallen was banned from various radio stations after being caught using a racial slur; his records subsequently reported a spike in sales. 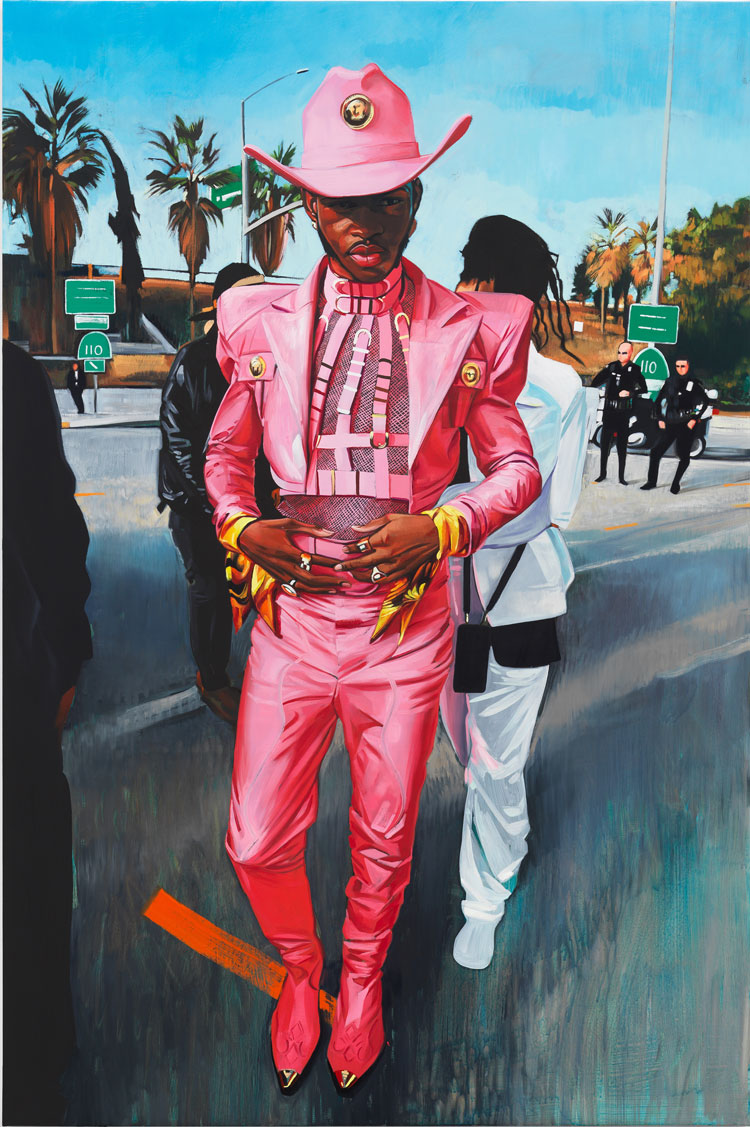 One of the most striking portraits here depicts one of Wallen’s opposite numbers, the black, gay Lil Nas X, whose 2019 mega-hit Old Town Road was removed from the country charts — ostensibly for not being country enough, but very possibly due to the singer’s race and sexual orientation. The singer stands proudly in a pink Versace cowboy suit. The fuchsia fabric, eye-grabbing in photographs, becomes, in McKinniss’s lurid rendering, a rebuke to the black uniforms of policemen in the background.

This portrait replicates a shot from outside the 2020 Grammys. McKinniss often paints from photography. With some exceptions, his works transplant images from popular ephemera – album covers, screenshots, postcards, magazine shoots – into finely wrought painted form. Past subjects include the tattooed shoulder of Zayn Malik, Laura Dern’s Jurassic Park character Ellie Sattler, and a member of the band Kiss; on McKinniss’s, website these are presented against a background of stock photos, advertisements and tabloid headlines. 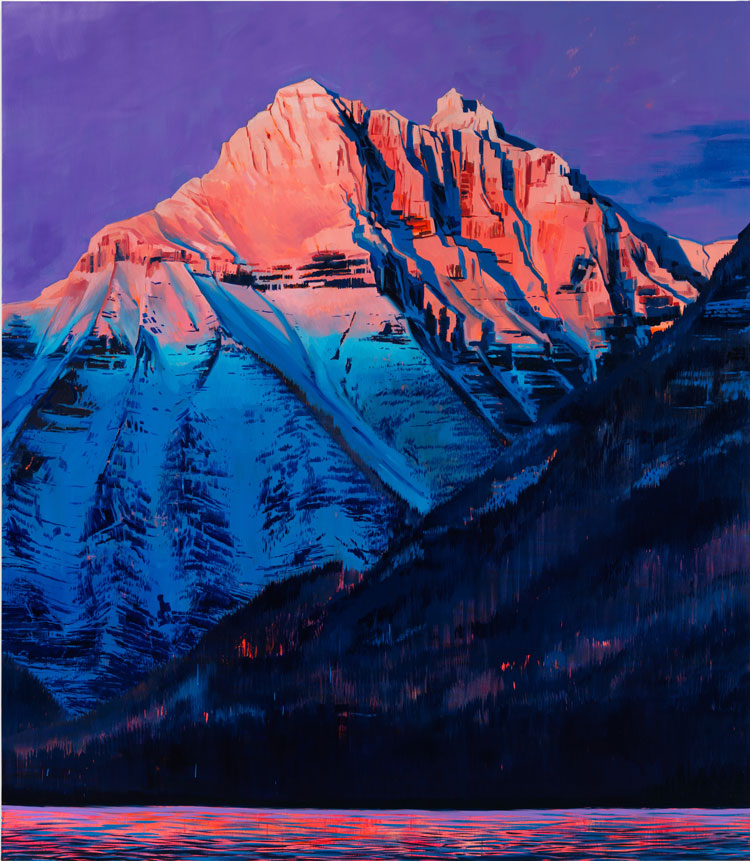 This method shares something with appropriation art. But his paintings insist on their own status as artworks; that many of his subjects come from celebrity and media does not seem the sole point. Scenes cribbed from popular culture share space with those that might not. One landscape in Country Western depicts Lake McDonald in Montana, bedded with rainbow pebbles and fringed by a spectacular mountain. Whether this image is drawn from popular culture seems beside the point.

McKinniss had a brush with out-of-art-world fame in 2017, with his cover for singer-songwriter Lorde’s second album Melodrama. But he rose to attention the year before that, with his painting of Prince from the cover of Purple Rain, which he began the day after the singer’s death. McKinniss’s gallery refused to commit to showing the painting before the work was finished, anxious about causing offence. But it need not have worried: McKinniss’s rendition, shrouding the purple one in flaming light, was a full-throated tribute. Prince was elevated like an Italian baroque saint. 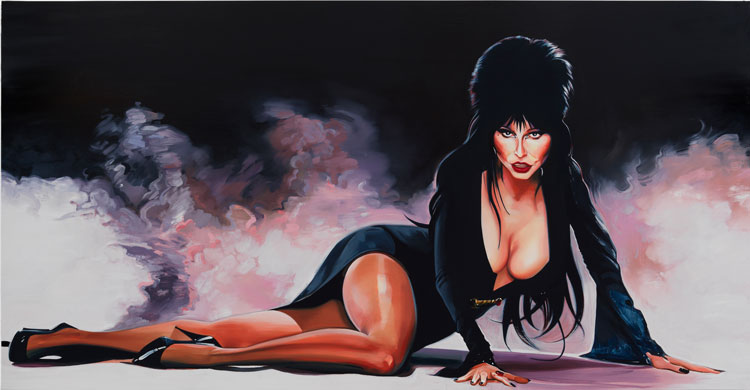 When fellow New Yorker Alex Da Corte creates a mixed media altar to horror presenter Elvira, Mistress of the Dark in a mixed media work, you anticipate some level of irony; when McKinniss paints her reclining before a cloud of dried ice, it feels like an earnest appreciation of the 80s cult icon, or at least of the image of her painstakingly recreated. Asked in 2016 about his painting of the Star Wars droid C-3PO, McKinniss described him as “a ridiculous and beautiful golden god”.

This sincerity sets McKinniss apart among artists embracing pop culture. Andy Warhol, who himself started to use Marilyn Monroe in his silkscreens shortly after her death from a drug overdose, idolised the glamour of celebrity while casting them as mass-produced commodities. When Elizabeth Peyton paints celebrities, she grants them a false intimacy that replicates that of fandoms. Many others have caricatured them, instrumented a celebrity’s ubiquity or shown them as victims of society (the work of English painter Stella Vine, popular in the mid-00s, did all three). 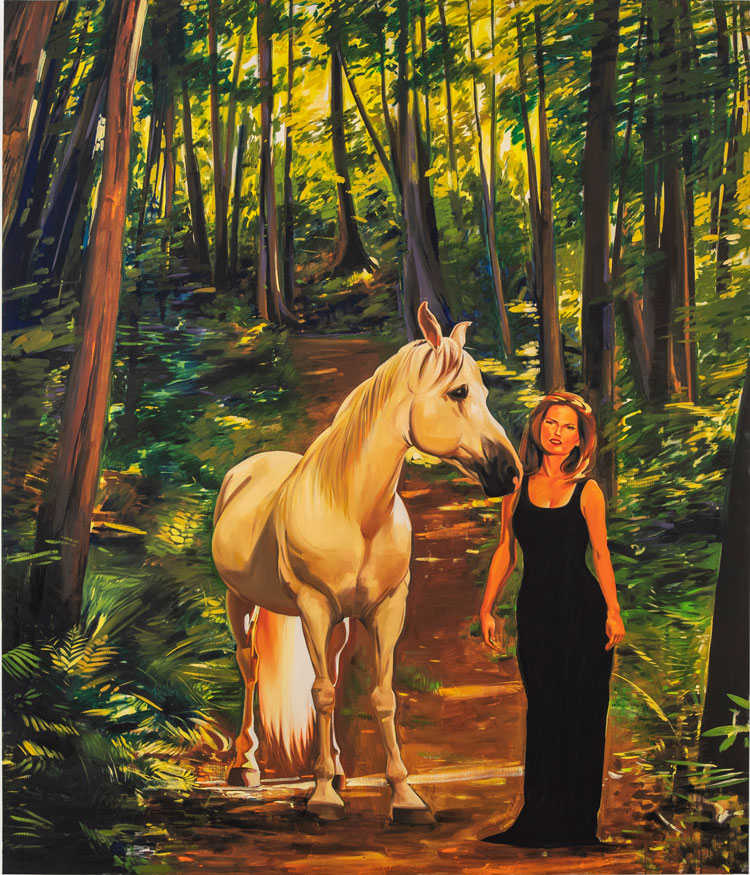 In an art world where a spoonful of knowingness and distancing has become almost de rigueur, McKinniss’s canvasses feel lassoed in a past, real or imagined, when artists simply painted what they enjoyed. His brushwork, proficient, present and correct, seldom demands attention for itself. But it often elevates what could so easily be kitsch – take Shania Twain’s Horse 2, in which the singer stands in a fairytale woodland, actually a stage backdrop, with her white horse – into something wryly affectionate. It is a fine line, but McKinniss walks it well. 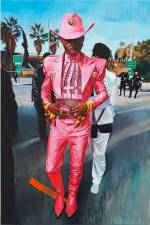