Throughout his career, Robert Motherwell (1915–1991) had a great love of paper. He called it "one of the most beautiful collaborative creations of mankind" and "the most sympathetic of all painting surfaces".1 In April 1965 Motherwell was in a Japanese shop in New York, buying a toy for a friend’s child, when he discovered a beautiful rice paper called “Dragons and Clouds”. He bought 1,000 sheets, all of which he intended to paint, without alteration. In May and June that year Motherwell painted the 560 ink drawings that make up the Lyric Suite(1965). The series remained incomplete after hearing from Kenneth Noland that their fellow artist and great friend, sculptor David Smith, had been in a serious car accident. Motherwell and his wife Helen Frankenthaler rushed to Smith’s side but he had died just 15 minutes before their arrival.

The Lyric Suite was named after Alban Berg’s string quartet, and dates from 1965 when, as Motherwell recalled, “And then one year I had them all framed, and I like them very much now. I should also say that I half painted them and they half painted themselves. I’d never used rice paper before except occasionally as an element in a collage. And most of these were made with very small. I mean very thin lines. And then I would look at amazement on the floor after I’d finished. It would spread like spots of oil and fill all kinds of strange dimensions”.2 Later in 1965 MoMA staged Motherwell’s first major retrospective. In the process of that show, he explained the Lyric Suiteto the museum staff, in the form of a questionnaire. Following that, with an addenda he wrote about them in more detail. Sam Cornish, author of the handsome and compact catalogue that accompanies the Jacobson show, observes of that period:

The purchase of the Japanese rice paper was just one of dozens of ‘reflections and circumstances… preconscious, unconscious, and conscious’, which led to the creation of the Lyric Suite. …The pressure of continual questioning about his art was combined with the apprehension of seeing it arrayed in a single space; ‘only painters and sculptors are subject to seeing their life work taken in a few glances, in a few seconds’. He felt increasingly self-conscious, something that ‘is awful in relation to the act of painting’. Much of the questioning was about the role of automatism in his work. His self-consciousness combined with the questions put to him about automatism and with his awareness of the ‘fecundity’ that drove the work of Smith and Motherwell’s wife Helen Frankenthaler: “And then it came to me in a flash: paint the thousand sheets without interruption, without the a priori traditional or moral prejudices or a posteriori ones, without iconography, and above all without revisions or additions upon critical reflection and judgement. Give up one’s being to the enterprise and see what lies within, whatever it is. Venture. Don’t look back. Do not tire. Everything is open. Brushes and blank white paper! Something like that, but intuited, not thought out’.3

Robert Motherwell: Works on Paper is the first show dedicated to the drawing and works on paper by Motherwell to be held in Britain. It marks 20 years since the artist’s death comprising some 90 works spanning most of his career. The hang is key to their appreciation; indeed they require what all challenging painting demands, that the viewer come and go from the works, to consider and reflect. Reading the description of Motherwell’s art practice in May and June 1965, where he made between 10 and 50 a day, indicates an intense even frenzied period. In extreme heat he worked naked, sweat often dripping onto the sheets of paper lined up in rows on the floor, listening over and over to Alban Berg’s music. Motherwell’s account of the creation of these works is in stark contrast to the finished works that evoke calm and silence. “Most were made in seconds not minutes. The rhythm of my wrist became freer and broader and unselfconscious. The strokes were made with as much violence as possible without tearing the paper.” After the event he noted, “perhaps I feel happiest when, during the creative process, I simply let work ‘pour out’, so to speak, without critical intervention or editing”; he also noted that this series was “unadulterated automatism”.4 Black ink was used in the initial stages of the suite, and as it developed he introduced coloured inks, and sometimes gouache.

Robert Motherwell was the youngest and the most prolific of the Abstract Expressionists, possessing a revolutionary modernist sensibility. Motherwell, who had studied philosophy before becoming an artist, remained an intellectual artist searching for a political and personal voice through abstraction. His works on paper and the critical role of drawing in his exploratory work, as this exhibition shows, were key to his work as an innovative printmaker, making over 500 editions and working with numerous collaborators. Robert Motherwell: The Complete Prints 1940-1991, Catalogue Raisonné (2003) of his prints was assembled by the Walker Art Centre, the museum with the largest collection of Motherwell prints in the world. The publication is one of the finest art books of the past 10 years or more; in autumn 2012 the Walker Museum, sponsored by the Dedalus Foundation (established by Motherwell in 1981) will publish the second volume: the catalogue raisonné of paintings, collages and works on paper. As the love of the Japanese rice paper triggered a vast body of work in the Lyric Suite, Motherwell’s printmaking testifies too, to his love of process and materiality.

If an artist is really good, he adapts to the particular quality that an etching can do, but nothing else can do. Or, a certain other quality that a Bavarian limestone in lithography has that nothing else has, including the best painting in the world. It’s something different… an abnormal sensitivity to the quality of the medium.5

Motherwell’s friendship with David Smith revealed his commitment to other artists and to a manner of working. He set up a studio in his home, with master printers and assistants, which suited his personality, and in practical terms was liberating, for he could have his prints made and editioned in one place; comparisons with his paintings could take place organically.

I like to experiment without a deadline...I am an erratic editor of my work – even more so in alien surroundings – and like to compare the prints physically with paintings in my studio. I painted alone in my studio for twenty-five years, and it got damn lonely… as I grow older, I feel the need of collaboration and comradeship.6

A study of Motherwell’s art in all the diverse media he chose to work with can be intoxicating; it is like a marvellous conversation that one does not want to end. Seeing the 90 works on paper in London was a rare joy, an experience that keeps triggering thoughts and inspiring mark making and meditation on aspects of life, that words cannot always elucidate. Motherwell wrote in 1979, “Good images have a way of generating others. The despair of the artist is that he can only work on one at a time”.7 The very moving nature of the London show of Motherwell’s works on paper is in keeping with the opinion of one of his greatest champions, Robert Hughes, long standing art critic for Time magazine. He wrote of a retrospective exhibition in Buffalo in 1988: “his full maturity came after the abstract expressionist ‘period’ – in fact, after 1960 – and his career illustrates the perils of generalising about decades, groups or movements. Of course there are expressionist elements in Motherwell, and strong ones at that. But the rhythm of this show obliges one to discard the hearty cliché of the abstract expressionist as a kind of existential romantic, flinging pots of paint in the eyes of fate”.8 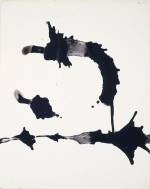 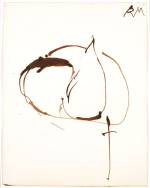 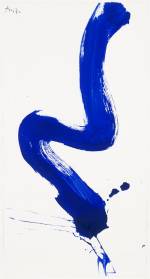 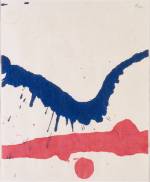