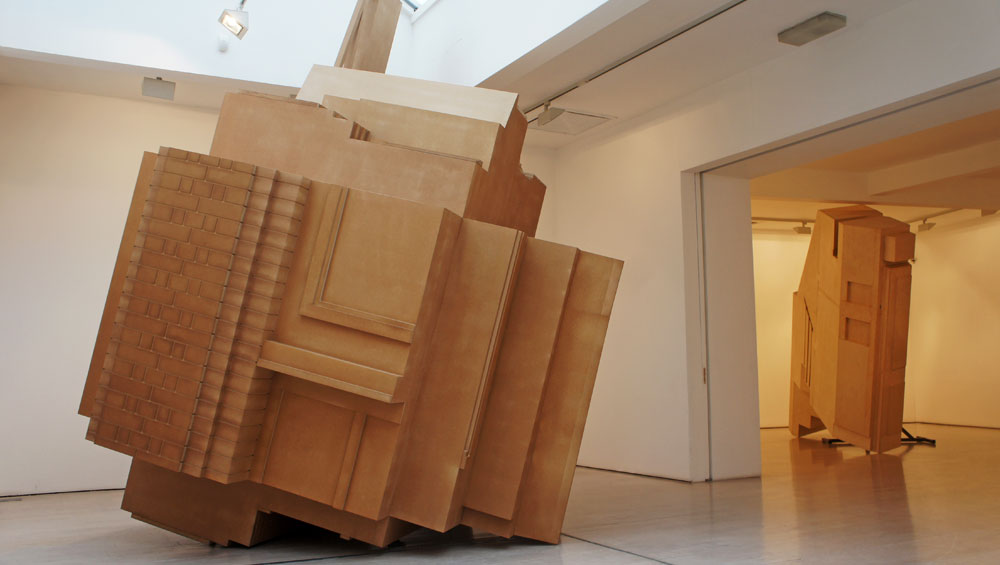 Walking into Stealing Space, Richard Wilson’s new exhibition at Annely Juda Fine Art, is like visiting the workshop of the artist’s brain. Ceiling-skimming sculptures, experimental drawings and maquettes of realised and unrealised projects all communicate how he thinks about space – and how he keeps challenging us to think about space.

Wilson’s vision for this exhibition is considerably more low-fi than his last major work, Slipstream (2014), an 80-metre long aluminium sculpture inspired by the aerodynamic velocity of a stunt plane twisting through the atrium of Heathrow’s new Terminal 2. In Stealing Space, we see him working on paper, and building with birch-ply-clad MDF (medium-density fibreboard) on a considerably smaller, domestic scale – yet still playfully interrogating the limits of the architectural space in the third-floor gallery at Annely Juda Fine Art, where he is showing for the first time.

At the opening of Slipstream in 2014, Wilson told me: “I want to make the void solid” and, while the materials and scale have changed, his objective has stayed the same because two sculptures in this new exhibition do exactly that. Space Between the Door and the Curtain (2017) and Space Between the Landing and the Gallery (2017) are solid voids of spaces in the gallery and at his home. “It’s an ongoing enquiry,” says Wilson, who also compares his new works to 20:50, a site-specific oil installation from 1987, bought by Charles Saatchi.

“It’s almost like building a fuel tank,” he says. “If you look at a Ferrari petrol tank, they are special shapes because they are fitted to the boot of a car. They maximise the shape of the tank as much as possible, so it has all these awkward moments on it, which are all about slotting into the boot of the car – and it’s the same with these pieces. It’s a tray or a tank that sits and follows the topology of the room. The space pieces certainly work in that way, but they are not exact copies of spaces in interiors.”

The sculptures are recognisable as interior voids through the negative impressions of banisters, staircases and door handles printed on to their surfaces, as if the empty space has been cast in MDF, and the titles reference the spaces they are drawn from – in between, everyday spaces that we tend to overlook.

“We all live in space and yet we’ve got no real concept of it. I’m just making the unknown real. I think what I was hoping is that, on viewing the sculpture, one realises that you just pass through spaces. The experience, the journey to the gallery, up those stairs, without knowing it, you’ve encountered a space. I’m just making clear the unknown, I suppose, by boxing up the air you’ve just walked through and transporting it into the room.”

Another sculpture, Block of Dering (2017), is wood “cast” from the facade of the gallery building. Alongside, a drawing shows Wilson’s playful moulding of air; a photograph of the facade has been cut up and “boxed” up using the language of an unfolding cube. “You can make volumes out of straightness and planes and you can make shapes be seen and be real just by putting a retainer around the shape to keep the medium of air in its place,” says Wilson.

Rather than sketches, the drawings are like architectural plans. With pencil and crayon, Wilson makes the interior voids solid through shading, floating them in a new void, a piece of white paper, just like the white gallery space. “The drawings really are about making clear what is taking place. They were really ways, or little windows, to inform the spectator just as to how I got to the sculpture. All the sculptures don’t just appear; they all come from previous encounters or inquiries.”

Wilson’s work has mostly been site specific. “I don’t sit in the studio and dream up an anthropomorphic shape and then go about producing it. I’ve always had to borrow from the real world,” he says.

The sculpture Blocka Flats (2017) borrows from the form of a chest of drawers. Conceptualised by its title and obscured of its purpose through altering it into an abstract form of diagonally jutting layers, Wilson objectifies this everyday object. In a different way, he makes it visible – he makes it solid. “It’s a bit like a suitcase: it’s a box of space that one wants to get hold of to be able to take objects from a to b, across water or across the sky. A suitcase is a void, but it needs its perimeters. I like this notion of what space is in the world.”

This three-dimensional block of spaces, a chest of drawers, taken out of its context and placed in a void, holds the same shape and basic concept of space as a block of flats, to which the title refers. Perhaps it is scale, rather than shape, that helps us distinguish the purpose of space.

“Scale is all to do with your relationship to what is big. One’s always thinking of comparisons. I love those drawings when you see ships leant up against the pyramids to give a sense of the pyramid’s scale or lines of buses underneath a sculpture to indicate how big it is. It’s all relevant to something – they are notifiers,” says Wilson.

He plays with the concept of scale in the exhibition, filling the larger gallery rooms with the “solid voids” of the timber sculptures. “I wanted them to slightly overcrowd the space, to be almost too dominant,” he says – then using a small room, almost obscured behind one of the sculptures, to display the small scale maquettes, including those of two realised projects, Turning the Place Over (2007) and Slice of Reality (1999-2016). Seemingly compact and neat in maquette form, these two realised works were, in fact, both vast in scale. Turning the Place Over involved cutting a 10-metre ovoid section from the facade of a building. On a similar scale, Slice of Reality was a cut section of a ship.

“When people say to me, why so big, I always say: ‘Well, if you’re putting something in architecture, the architecture is always going to be bigger than the thing that you’re putting inside it, so it’s not that big. I think what I’m trying to do is not just speak about the architecture of space, but question just how much space there is out there, and ask how much space does space take up? And to start showing what space is.”

These new sculptures are studies of space. They are byproducts of Wilson’s artistic production and results of a continuing, possibly lifelong and possibly obsessive enquiry into the understanding of space. Like an erudite scholar, Wilson has harnessed an unknown niche and opened it up to us through this exhibition.

Walking out of the gallery and through the real “space between the landing and the gallery”, I looked around, intending to fully ponder the space, but in less than three seconds, the window caught my eye. I gazed down on to the hotchpotch of building facades, the hanging pub signage and the grey morning clouds, transfixed for a moment. I looked at my watch and walked down the stairs. The space between the landing and the gallery was forgotten. 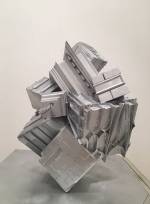 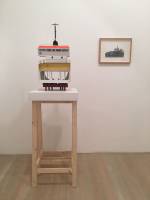