It is hard to imagine that innovation could be brought to the ancient tradition of printing from woodcut. Nevertheless, it is an art that strongly appeals to many contemporary artists.

Today, this centuries-old artistic skill continues to be taught at fine arts schools as a way of exercising forms of visual expression. Despite this, it is rare to find an emerging artist who uses woodcut as his main artistic language, or attempts to explore new possibilities of artistic expression within woodcarving. For this reason, the work of the artist Fabricio Lopez is unexpectedly refreshing as he uses wood as the matrix of new ideas in arts.

Lopez established his own strategy to work with woodcut in order to “conquer” the paper. His printing procedure requires a gentle yet vigorous process. It involves his entire body dominating the wide expanse of paper surface that he employs to create large-format prints, which can measure up to 5m x 3m. To show these large woodcuts, he also developed a system for exhibiting them, incorporating the environment in to his works of art. In fact, the environment has always played a significant role in his work.

Born in 1977, in Santos, a city on the coast of the state of São Paulo, Brazil, where he still lives and works, Lopez draws from the peculiar landscape of his hometown – a fusion of decadent urbanity with wild nature. Wandering through the historic city centre with its 19th-century coffee factories and port area, or kayaking on the region’s canals surrounded by mountains and sea, the artist makes notes and sketches. The drawings capture scenes or scenarios from the city, which he then reworks and carves on wooden matrices. Once the printing process has started, Lopez recombines these matrices, composing layered images in which he also allows chance to determine the outcome.

In the woodcut Oco [Hollow] (2013), for instance, we see a landscape composed of leaves from the rainforest superimposed on the image of the ruins of an old mansion. In another woodcut, Várzea [lowland] (2013), the same traces of wildlife create a background to sober lines delineating a boat and the wings of a massive butterfly and, walking above the interweaving of colours, is a pedestrian holding an umbrella. Lopez works with graphic ink, its saturated and vibrant colours highlighting the overlapping of images. Before working with woodcuts, Lopez was a painter, and what could be more natural than the creation of painted matrices or paintings made with carved reliefs? For the artist, even the wooden plank that generates many different prints has a lifespan and at a certain point deserves to become an artwork itself. When this time comes, Lopez alters its surface and makes a painted relief that contains the memory of the many images it has already made, remnants of paper and ink like the ghosts of old impressions.

The work of this artist, who brings new scale to woodcut, can be seen from 24 July at the gallery Mercedes Viegas Arte Contemporânea, in Rio de Janeiro, Brazil. Fabricio Lopez, who has already participated in international exhibitions such as Gravure Extrême, Brussels, and The Dirty and the Bad – from São Paulo to Svendborg, Denmark, in 2011, will display new works at this solo show that runs until 24 August.

Caroline Menezes: At the beginning of your career, you migrated through various materials and techniques. How did you arrive at woodcut?

Fabricio Lopez: I started working with wood for practical reasons, to build the studio furniture, since it was a cheaper solution than buying ready-made furniture. Since then, wood has become a fascinating work material for me. During college, you come into contact with various techniques and materials, and woodcut was one of them. In 2000, I resumed working with wood with huge impetus, overlapping the procedures that I had executed in painting with the woodcutting.

CM: The size of your artworks causes amazement as it is not common to see works on such a scale in woodcuts. How did you decide to work with such large formats?

FL: The scale was natural to me. I had been painting large pictures, so I decided I would make woodcuts of the same size. I have gradually been developing and adapting the tools and procedures, and searching for types of paper to enable me to produce these large images. I had a very important experience in 2004, at the Centro Cultural São Paulo, when I showed the first two large-scale woodcuts, measuring 3.20m x 4.80m.

CM: Your engravings always comprise figures, although they are not fully visible or decodable at first glance. In one of them it is possible to see a butterfly and, in another, a building. Are these images related to the urban space in which you live?

FL: In some ways, yes, they are linked to this whole production context that I develop in my studio and along the paths that I follow. They do not make a direct allusion to the place, but they are composed of the stimuli that the place provides. The photos I take and the notes and drawings that I make in the estuary, in the docks region, are information that I subsequently work on and recreate, in most cases using chance as a creative element to build overlays that bring about a unique image with their own dynamic.

CM: What do the painted matrices mean? What is this hybrid of matrix, woodcut and painting like?

FL: It is a painted relief because it ceases to be a matrix. I keep several matrices, and after a few prints with them combined, I set apart some with which I will no longer work. These matrices carry a history consisting of a series of residues of prints made, and I finish them by adding colour and thus they are transformed into painted reliefs. They then are no longer matrices but paintings, being a way to give another life to these images in a beautiful manner, by shifting from one art mode to another.

CM: You worked for some time in a collective studio. Was this experience also linked to woodcuts?

FL: In São Paulo I had the experience of being in a collective workshop that worked with posters pasted up on the streets. We developed a number of projects, residencies and workshops in the Coringa studio and the Piratininga studio. One of the projects was to take woodcut matrices to print shops that printed large-scale billboards, before the Cidade Limpa1 (Clean City) law. We got large quantities printed – 1,000 posters of the same image – and more than 50 artists pasted woodcuts all over Brazil for a few years. This exercise was even carried out in other countries.

CM: You developed your own technique of applying your prints directly on walls, dispensing with frames. What are the difficulties encountered when making a woodcut of this proportion and applying it in this way?

FL: I work alone, so I had to devise my own strategies. The paper I use helps me a lot, because it creases and tears, but at the instant that I glue it with reversible glue it becomes completely smooth again. This glue also allows me to remove the entire print from the wall with water. This paper can be soaked and then the glue melts, and the paper goes back to normal after drying and can be glued again without loss of image quality. This process allows the material to incorporate the architecture of the place where it is applied, becoming a second skin to the surface. In my printing process at the studio, I stand and lie on the paper. When I print, I am on the paper being printed. At the end of the construction process, the image already comes loaded with a story made up of the process itself.

1. Clean city law is a law established by São Paulo City Hall in 2006 prohibiting any visual advertising, such as outdoor posters and billboards, in public spaces. 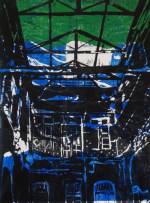 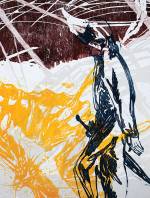 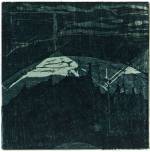 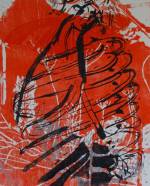