Andrea Palladio and the New Spirit in Architecture

It is significant that this exhibition at the Royal Academy in London originated in Vicenza (Palazzo Barbaran, through 6 January 2009) and has now come to London. The Palazzo was an important work of Palladio, lying close to the historic centre of the city, and built 1570-75.1 For the exhibition to travel and to be recomposed at the Royal Academy, Burlington House, Piccadilly, is highly appropriate since the Earl of Burlington devised this Palazzo with Colen Campbell as his scholar-architect, (guiding it between trips to Italy).

This occurred in 1717. Burlington was the key promoter of “Palladianism” in England as epitomised by the building of a model Palladian villa, Chiswick House (begun 1725). Although the influence of Andrea Palladio, spread as a result of his “I Quattri Libri dell’ Architettura”, across Europe, through France, Germany and even Russia (notably at Petrovsk), it was in England, through the enthusiasm of Burlington, that it most rapidly took root, retaining a lasting influence even into the present century, although now as a “niche” practice, of repetition in some hands. Palladio himself never did copy.

Accordingly, what is especially relevant is the comparison of social and economic motivations which both drove Palladio’s original clientele in the Veneto, but all of two centuries later, in England. Palladio found his most enthusiastic and committed clientele amongst the agrarian gentry around Venice and Vicenza, with a core of wealthy nobility, linked to Venice who had turned to agricultural improvement following the erosion of formerly productive Mediterranean trade routes by the Ottoman expansion. In England a not entirely different combination of social and mercantile factors saw a development of landed estates, improved by earlier enclosure methods, also fuelled by Atlantic trading wealth. At the same time in England the baroque flourish of Sir John Vanbrugh and others, a Whig ascendancy in effect, was overtaken by less openly extravagant tastes in country house design. The age was one overshadowed by revolutionary undertones on the continent, and clients here instinctively sought for a simpler clarity of elements in design, than the baroque ornamentation. Palladianism as such provided that ready rule -book for a coded expression of the client status, offering “civility” in a post-Civil War epoch. The great English contribution however was to merge seamlessly the country mansions under the influence of Palladianism with the “natural” landscapes set around them by Lancelot “Capability” Brown, through the eighteenth century. The mood of humanism, which influenced Italian architecture in the sixteenth century, could be said to have helped the engendering of the British Enlightenment philosophy, which lay behind the adoption of Palladianism in England.

Many of Palladio’s clients were modest gentry, such as a Salt Tax Collector (Villa Gazzotti Marcello 1542- 1547) or else as expressed in the later Villa Saraceno, designed for a prominent civil servant. Similarly, the Villa Zen (c.1558-67) was built for a prominent Mayor of Vicenza of the time. The Villa Forni Fracanzan and Grendene was built for Girolamo Forni, a merchant and dilettante painter, who commissioned Palladio’s least spacious villa (1560s). None were “grandees” but all were rising and wealthy individuals, anxious recognisably through their houses, to express and enhance their status in society. This exhibition is particularly relevant for informing us of what was a new development of English domestic architecture. Growing ideas of the natural landscape as promoted by Lancelot “Capability” Brown, ensured that combinations of Palladian “seat” with such revisions of the surrounding topography, as were appropriate to the fashion for a new picturesque. Painters emerged too, such as Richard Wilson, to consolidate the combination. Even Thomas Gainsborough lent his talent as a portrait painter to the embellishment of this affluent landed class. The fact is that Palladianism came to fruition in England 150 years after its originator had flourished in Venice. Indeed by Continental standards it was far out-of-date. Yet it caught on, suiting the British sensibility for the controlled but not excessive enhancement of “standing” in the fluid social climate of the 18th century. Later, awareness of the French Revolution and disenchantment with the brutalising aspects of the slave trade proved the wisdom of this preference. Palladio had himself carefully incorporated, to a limited degree, garden architecture and riverscape into his design, a precedent to later English developments. In the 16th century region of the Veneto, the already formal-functional patterns of the landscape would accommodate readily a villa as central as had been the original farmhouse and yard. Palladio embraced here, as in the Villa Thiene, a river –villa relationship with side-pavilions that faced onto the river Tesina, while maintaining the practical accessibility of the linked farm courtyard. Later it seems that Palladio did encounter a problem in the case of the Villa Cornaro linking this concept of side pavilions, for only after his death were these made adjacent to, and fully integrated with the main block: this was arguably a less than elegant adjustment, nonetheless approved earlier by him. Interestingly, this lack of garden design did lead to a commission, never completed for the English landscapist Geoffrey Jellicoe RA (1). But in the slightly later Villa Pisani -Placco the lateral wings are set slightly apart from the main villa, a more pleasing solution to the eye.

Palladio’s skill lay in his reduction of villa design to the most basic fundamentals. A rusticated ground level would serve as a podium carrying the range of single columns, which lent gravitas to the piano nobile: the entrance portico would command an equal number of bays placed symmetrically about the elevated entrance. Overhead, the single raised pediment was placed sometimes with a small circular opening. This completed the principal façade. Rear elevations were in line, but less overtly formalised (as at the Villa  Foscari, Malconenta di Mira, 1558-60).

Palladio’s father was a miller, and Andrea himself became a stonemason and sculptor initially. In the early 1540s he was talent-spotted by Giangiorgio Trissino, who became his mentor, introducing him to Vitruvius, and then bringing him to Rome on more than one occasion. While Palladio was of a different generation to Bramante, he rapidly absorbed his achievement. But his evident professionalism led him to produce in 1570 the “Quadri Libri d’Architettura’, a brilliant move, which spread his name and reputation widely. A valuable intermediary towards England was the architect Inigo Jones, who acquired after Palladio’s death, while in Italy, chiefly from Palladio’s student Scamozzi a large number of Palladio’s drawings. These came back to England and are well represented in the current exhibition in London. This protracted period of development for Palladianism to become the mode was one where Jones and even Sir Christopher Wren, let alone Sir John Vanbrugh, had been construed as “Classical” architects, but were not followers of Palladio strictly speaking, any more than was the Scottish architect Sir William Bruce (1630-1710). Perhaps this was because they missed the message of sublime simplicity that Palladio expounded.

In the long years interim in England, it took time for Palladianism to mature. In the fullness of the eighteenth century this came fruitfully on fertile ground in England, following the change from the Baroque/Whig ascendancy. In the nick of time, England and Scotland were spared a freshly grown, now overweening baroque culture and its full flowering. The social conditions that embraced Palladianism sought a slimmed-down aesthetic, amenable to a reformist culture expressing a more constrained Enlightenment cultural and religious framework. But one cannot underestimate the value of Inigo Jones, Colen Campbell and indeed, William Kent as links to the eighteenth century English flowering of a Palladianism which embraced, through “Capability” Brown’s accomplished “placement” of buildings in the English landscape, a new epilogue to Palladio’s own work, not ever contemplated in Italy. The Royal Academy exhibition is a masterly assemblage, indeed. The exhibition designer is the distinguished architect Eric Parry. Apart from the available wooden models, the exhibition is primarily composed of the drawings of Palladio, not only design drawings, but also numerous sketches in his own hand. These are particularly revealing. They include his survey of Raphael’s Villa Madama outside Rome. Villas came to occupy a central place in Palladio’s oeuvre. Although coming from Vicenza, centrally located in the Veneto, Palladio grew up at a key time during which the farms and estates in that great expanse of flat and fertile land were being improved as a matter of Venetian state policy, to establish a new self-sufficiency in grain. It was also recognised that landowners had military responsibilities. Land became a better investment than before. It is not perhaps emphasised enough in the Exhibition that this robustly agrarian agenda lay behind the building of the villas for the most part. The concept of a modern culture “of our time” that Palladio ensured was also “all antica” with regard to simple Roman precedents fitted the mood of the time. The villas for the most part were the centre of working estates, and had to encapsulate that role amongst all else.

One of the valuable rewards of Howard Burns’ catalogue essays and entries is the discovery that Palladio was intrigued by the problems of low-cost “affordable” housing in Venice, and there are (Cat.86a) sketches acknowledged to be in Palladio’s hand for four standardised type housing units with a courtyard and well. These included a first floor plus a mezzanine level. However Palladio’s supreme venture in Venice was of course for ecclesiastical clients. The “Sydney Opera House” landmark building of Venice has to be the church of San Giorgio Maggiore, facing over to the Piazza San Marco, and famously later painted by Canaletto. The work of reconstruction here was completed in the 1570s, but before Palladio’s death he had also commenced work on the gem-like Il Redentore, church not finally consecrated, until 1592.

This is not the first exhibition on Palladio to be mounted in London. The Palladio exhibition in the Hayward Gallery in 1975 had taken place in the final throes of conventional modern architecture: Brutalism had left a yearning for purity. The timing of this new exhibition, and its most scholarly catalogue, could not have been better. It arrives in London when the flush of postmodernism which followed and its counterpart, hi-tech signature structuralism has run a course leading forward towards a more rational and more cost-conscious climate of architecture, which while liberated from such excesses, retains a humanist, non-consumerist core. At the Royal Academy Mary Anne Stevens the Curator, Eric Parry and Kate Goodwin are to be congratulated on setting Palladio right again in the current global culture.

This bolt-on concourse and colloquium of views with key interviews by a cross section of leading contemporary architects runs parallel to the above exhibition and is a necessary adjunct, a demonstration of Palladio’s clear influence amongst the present generation of practitioners. It includes two architects from Italy Also Peter Ferreto and Zaha Hadid from England, Antonio Jimenez Torrecillas from Spain, Fumihiko Maki from Japan, Jan Olav Jensen from Norway, Neil Durbach from Australia, and Robert Konieczny of Poland. The designer of the Watercube for the Beijing Olympics, Chris Bosse is included. Five- minute film interviews are included from Sir Richard MacCormac, Roger Zogolovitch, and from Japan, Arata Isozaki. Noticeably “copyists” of Palladio, however elegant in mode, are not included. Kate Goodwin has curated this important adjunct and the theme and content established will be reviewed separately here later in March. 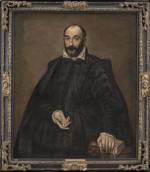 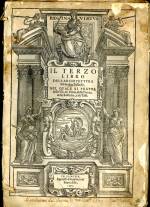 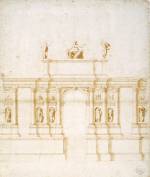 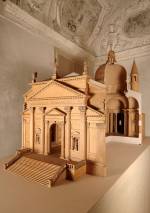