Return of the Buddha: The Qingzhou Discoveries

Return of the Buddha: The Qingzhou Discoveries

In 1996, while levelling the sports field of the Shefan primary school in Qingzhou, Shefan Province, China, workers discovered a shallow pit, filled with broken Buddhist sculptures. Although covering an area of 60 square metres, the pit was only two metres deep, suggesting that a protective temple or pagoda had once stood above it. The pit had been carefully constructed and the sculptures buried with care and ritual ceremony – not simply discarded.

The sculptures had not always been so carefully tended. All were broken in some way: many had been violently smashed, others showed traces of burning; some had only minor damage, been repaired, but broken again before burial. It is likely that some suffered during natural catastrophes (earthquakes; fire) and others were casualties of the intermittent persecution of Buddhism over the 700 years before they were interred. Fortunately, most figures had intact faces.

Of the 400 individual sculptures, 35 of the best preserved and most exquisite are on display in London as part of their first European tour. The sculptures come from a crucial time in Chinese Buddhist history, and Shefan lay at the end of the Silk Road so was open to a host of cultural influences from as far west as the Mediterranean. Hoards of other Buddhist objects (including over 1,000 sculptures) have been discovered in cave complexes and in reliquary chambers beneath pagodas in China, particularly in and around Qingzhou, but this find is probably the most important.

Also found in the pit were coins, porcelain, earthenware, lacquered wood and cast iron fragments that suggest the pit was filled some time between 1200-1250 AD. The sculptures, however, are considerably older, dating from a short span of less than 50 years: 529–577 AD. Most were carved from a fine-grained limestone, permitting crisp detailing, and it is remarkable how much of the original paint and gilding has survived the burial – providing a glimpse of how they must have appeared originally, faintly lit, within the recesses of a dark temple.

The size and decoration of the sculptures depended on the resources of those who commissioned them as acts of worship. The first exhibit is the smallest (less than two feet high), and earliest (529 AD), it bears a touching inscription from the donor – a widow who dedicated the offering to her late husband, two dead children and her only surviving child. It takes the form of a triad, a Buddha flanked on either side by a bodhisattva against a mandorla (a decorated, almond-shaped background). The Buddha has achieved nirvana, enlightenment; he is depicted with idealised features and a solemn yet serene expression. Bodhisattvas have delayed their own enlightenment in order to assist others on their own paths to nirvana. They are smaller than the Buddha, with more realistic faces and richly decorated robes. This triad is typical of the Northern Wei dynasty, during which sculptors shed some of Buddhism’s Indian influences and adopted more traditional Chinese elements: the Buddha has large, open eyes, a smile, and tiered, decorative robes that hide the shape of the body.

The largest exhibit is also a triad, some 10 feet high, five feet wide and weighing over a ton. Stylistically, however, it appears to be from a later period, when China was ruled by the Northern Qi dynasty whose aristocracy were nomadic, militaristic and hostile to indigenous Chinese culture. They favoured art styles from far afield – India, Afghanistan, Persia – areas influenced by the Greeks since the conquering armies of Alexander the Great in the 320s BC (whose name still echoes in ‘Kandahar’, the ancient capital of Afghanistan).

The solitary bodhisattvas of the Northern Qi period (after 550 AD) gave sculptors greater scope for stylistic experimentation. The most spectacular example in this exhibition is life-sized and as naturalistic as possible within the constraints of the form. The oval, full-mouthed face is austere yet compassionate and his richly decorated robes appear as crisp and fine as the day they were carved – with strings of pearls, tightly woven silk ropes, embroidered panels, and illustrations of fantastic creatures derived from Hindu mythology.

Another bodhisattva sits on an hourglass throne, with his left foot resting on a column growing from a dragon’s mouth. The face is gilded and framed by black hair; he wears a diadem still richly red, green and gold, colours that also remain on his pleated robes.

Buddhas of the Northern Qi are shown in slight motion with thin, plain garments that cling to the outlines of the body in a more naturalistic style. Two headless torsos of the Buddha from the Northern Qi period are strikingly similar in style to a red quartzite torso of Nefertiti in the Louvre – one of the great sculptures extant from Egypt’s brief flirtation with monotheism. Although the art and practices of the heretical Armana dynasty were later suppressed in Egypt, a more naturalistic styling in painting and sculpture persisted throughout the following New Kingdom dynasties and on into the time when Alexander became the first Greek pharaoh. It is purely this author’s speculation that a style originating in the Nile Valley in 1358 BC may have penetrated as far as the Pacific shore of China 1,800 years later.

Egyptian statuary is ‘underappreciated’, by some, for being ‘impersonal’, ‘rigid’ and ‘stiff’, especially compared to later Greek sculpture with its exuberance, fluidity and depiction of motion. These Buddhas could be criticised on the same basis; but for me, the restraint and formalism of these sculptures (in common with Egyptian art) actually serve to emphasise the emotion and character of both subject and artist. The effect is to illustrate both the transitory and the transcendent. The serenity and bliss promised by identification with the Buddha could not be better served and illuminated than by these works. 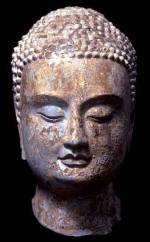 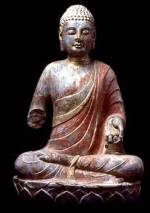 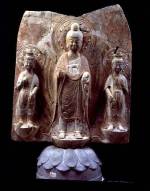