A new show at the Whitworth Manchester combines Raqib Shaw’s paintings and sculptures with prints, textiles and objects that reveal an intense dialogue between the ages and across continents 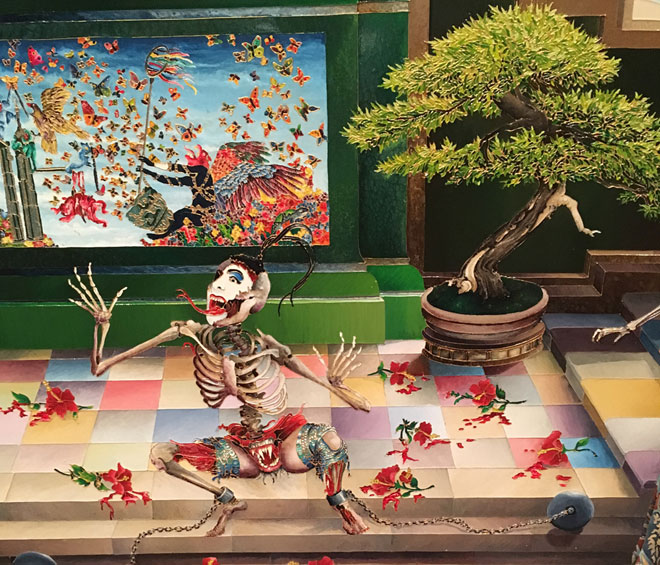 Raqib Shaw’s work pulsates with complexities and contradictions. The artist – born in Calcutta in 1974, raised in Kashmir and trained, and now living, in London – mixes ornate inspirations from Asia and Japan with a symbolism and formality drawn from medieval western masters, and infuses the whole with his own transgressive, highly personal narratives. His work seems to divide opinion. Though die-hard modernists find his style excessive or kitsch, there are a growing number of fans enthralled by the craftsmanship, symbolism and detail of his compositions. The fact that he uses an archaic, cloisonné technique – enamel paint, applied with porcupine quills to birch panels – to render his sensuous, fantastical paintings in the most hyper-real, glossy intensity, merely serves to emphasise his utter lack of interest in contemporary fashions. Either way, his work reverberates across centuries and continents with a conviction that few – if any – other living artists achieve.

It would be hard to imagine a setting that articulates the dialogue between east and west, ancient and modern in his work more effectively than the one that the Whitworth gallery in Manchester has contrived for this exhibition. It is as if a south-Asian princeling has called in his interior designers to redecorate the Whitworth’s central, open-plan gallery space; no accident there, as it is modelled in many ways on Shaw’s own reputedly palatial studio set-up in Peckham, south London. Four of Shaw’s colour-saturated paintings pulsate against a dark, ornate wallpaper backdrop: the wallpaper was commissioned from Shaw for this show and features writhing vine leaves adorned with tiny flowers and hummingbirds, along with blue and violet “pucks” (it is titled After A Midsummer Night’s Dream, inspired by works he created for Glyndebourne in 2016). Three sinuous, mannerist bronze sculptures are also his, but the rest of this show is given over to a selection of objects, drawings, textiles, rugs, sculptures and prints cherry-picked by Shaw from the collections of the Whitworth and other Manchester museums.

William Morris’s own Jasmine Trellis design (c1869) from the Whitworth’s collection is here – a pattern that Shaw used as inspiration for his wallpaper. A c19th-century silk, printed and brocaded gold and pink shawl from Kashmir from the Whitworth’s collection is also displayed, featuring salmon-pink florets quite possibly identifiable as the same hibiscus flowers that bloom in Shaw’s wallpaper; to reinforce that impression, not far away is an array of original botanical prints, including various hibiscus flowers from the Manchester museum’s collection. Cultures and narratives intermingle and cross-fertilise: elephant-trunked deities dispense blessings in a wallpaper print from Allan, Cockshut & Co (1880); English orientalist John Frederick Lewis beautifully captures the dappled golden sunlight, through an Arabic screen, in his 1873 painting Indoor Gossip, Cairo. A drawing by John Flaxman depicts writhing naked “slave” figures, setting off resonances with the naked tumbling figures in Shaw’s bronze statues. The opportunities for cultural and historical cross-referencing seem to multiply with each piece; the longer you stare at them, the more connections are revealed.

This is exactly what Shaw and his co-curators, Dr Maria Balshaw and Diana Campbell Betancourt intended. The show itself was inspired by a conversation between Shaw, Balshaw (then the Whitworth’s director, now director of Tate Galleries) and Betancourt, who is chief curator of the Dhaka Art Summit. They were discussing a possible exhibition that could work for both Manchester and Dhaka, as part of the programme for the New North and South network, celebrating shared heritage between the UK, Sri Lanka, Bangladesh, Pakistan and India. At the press opening, Balshaw elaborates: “We had been talking about the influence of Renaissance drawing … and I told him, we have some drawings in the collection. Then (Shaw said) in the V&A there are some extraordinary shawls, and I said, we have some of those as well. Then we started talking about wallpaper and William Morris, and we realised we had been talking about things that are all part of the Whitworth collection, because of its imperial history, and because Manchester was the textile capital of the world.” Balshaw points out that, far from being exotic souvenirs from the east, the best woven and printed items from South Asia were sought out and brought to Manchester by 19th-century textile merchants to inspire their own workforce to greater excellence and inventiveness; prints that we think of as quintessentially English are often anything but.

Given the autobiographical revelations and exposures familiar from his work, it is no surprise that Shaw has also brought in pieces from his own studio, including a c19th-century Renaissance revival hand-carved throne and a favourite Japanese Uchikake kimono and obi (c1875), which he wore for the photoshoot for his Kashmir Danaë painting (also on show). Touring the press around at the opening, Shaw gleefully admits the kimono has been not just worn, but “treated in the most base (fashion). It used to be a totally different colour. It has seen a lot.”

The desire to shock is irresistible to Shaw, as evidenced by his confessional pictures, which lure you in with their exquisitely rendered flora and fauna and chocolate-box colours. But look closely and all is torment, devastation and debauchery: Kashmir is burning, satyrs and skeletal characters cavorting; gaping, ravenous mouths with fangs where their crotches should be. Shaw frequently paints himself as satyr, mime-artist, ghoul and joker, unless he is appearing as persecuted divinity, blue-skinned and clad in sumptuous cobalt robes (referencing the Hindu god, Shiva, who is always blue). This is how he appears in the only new work in this show, the aforementioned Kashmir Danaë (2016-17), the last of his series of self-portraits based on old masters’ paintings, which were exhibited in London at White Cube (Bermondsey) last summer. “That one is my most personal, I think,” he says, pointing to the flames that are consuming his beloved Kashmir – where he grew up and lived until his late teens. Now that the country is in ruins, he says: “I can never go back.” This one was inspired by Jan Gossaert’s Danae, but instead of the golden rain that falls on the head of Gossaert’s blue-clad Danae – myth has it that Zeus impregnated her with the golden rain after she had been locked in a bronze chamber by her father, King Acrisius - Shaw’s kimono-clad figure has burning hot lava cascading down on his head.

Gossaert also inspired the neighbouring painting, The Adoration (2015-16). But where the Dutch Renaissance master’s The Adoration of the Kings (1510-15) features the usual biblical scene of royalty paying tribute to virgin and child, the kimono-clad Shaw – again in blue – is cradling one of his beloved dogs while attended by a more bestial kind of elite, richly robed but with slavering wolves’ heads for faces. Who are these wolves? In the catalogue interview, Shaw quips that they are “art world nasties”.

Also on show is a table that lays bare the tools and methods behind Shaw’s technique. In the past, he has been reluctant to discuss his practice, but now he is happy to enlighten the Whitworth’s many visitors about the cloisonné process. The use of this unbelievably labour-intensive technique, and the shiny, almost kitsch finish it achieves, gives him the confidence, he says, to reference the Old Masters. “If they were oil paintings, I think they would be rubbish oil paintings. You do not have the audacity to address Gossaert from the National Gallery (in oils). Don’t go there, it’s folly!” But he then declares: “We did stand up to the challenge. It doesn’t look that bad at all.”

Shaw also reveals one of the reasons for his adherence to this technique, despite the fact that it can take a year to finish a single painting (and that’s with the help of assistants): it is all about the extraordinary detail that can be fixed in enamel, even if you have to apply it with the point of a needle. “That detail is never ever lost. There is no short cut. That energy is there. It stays locked there for ever.”

Vitality is a good word to describe the high vibrational tone of all the works in this show, from Andrea Mantegna’s engraving Battle of the Tritons and Sea Gods (1470) to the Islamic hand-chiselled steel sword (Tulwar, c1875), to the 19th-century Japanese woodcut by Utagawa Kuniyoshi, Courtesan with Dog (1842). It is what makes it so mesmerising – even though it contradicts the “less is more” modernist credo; when the choices are good ones, more can be more.

As Balshaw says: “The references cross traditions in a really powerful way. When you are thinking about Islamic culture and use of pattern, pattern on pattern on pattern is not a problem at all. But 19th-century British interiors would have an incredibly florid wallpaper and then very large paintings in gilt frames …” (and chintz sofas, adds Shaw) “because they were actually wanting to demonstrate affluence … Doing it here feels right for all sorts of reasons.”

Shaw adds: “As a so-called contemporary painter, one always feels that one is pigeonholed as decorative art, and that’s almost something one feels very uncomfortable about. But (this show) … really is questioning that. The ultimate discussion is what is art, and what can art be?” 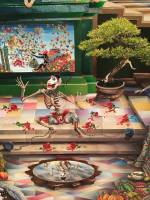 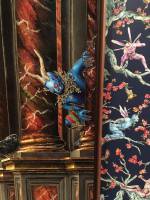 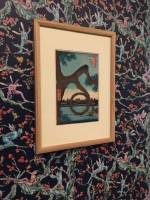 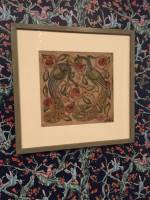 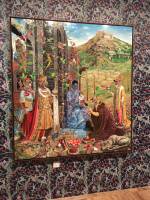 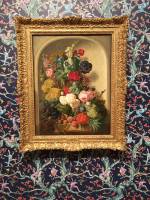 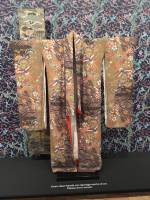 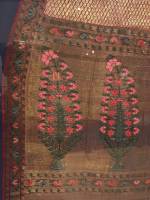 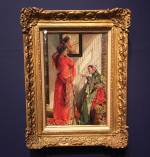 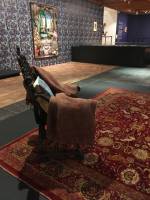 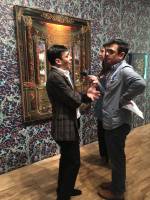