Nineteen emerging artists respond to the demands of the digital age in this annual exhibition devoted to new photography, offering expanded possibilities for depicting the real, the remembered and the imagined

First established in 1985, New Photography at the Museum of Modern Art (MoMA) in New York is an annual group exhibition that celebrates emerging photographers under a theme pertinent to contemporary creative practice. This year, its 30th anniversary show offers a selection of 18 artists and one collective who make work that either examines or relies on the processes of connectivity and circulation in the modern digital environment. While the exhibition fails to distinguish incisively between artists who simply use digital technology and the internet as materials and those who critique or laud their power as models for communication, the strongest works in the show are those that do both, presenting surprising reflections on the “ocean of images” that the exhibition’s title claims constitute the modern visual world.

Japanese artist Lieko Shiga’s series Rasen Kaigan (2006-12) uses digital technology to interrogate memories connected to a specific site and historical event. Photographing the small coastal village of Kitakami before, during and after a major tsunami hit in 2011, Shiga (b1980) presents doctored scenes shot with flashbulb starkness and effervescent pink, green and orange colouring, printed large and placed on the floor around the gallery space. A man poses contentedly alongside a woman, the long trunk of a tree apparently severing his neck; a girl attempts to cycle in the rut of a small, rocky ravine; bodies are seen bound or swathed in cloth, lying on the floor or hung upside down. Chronology is discarded – was each one taken before, during or post-tsunami? The crime-scene-style bright light and uncanny realism of the impossible or unexplained scenes in Rasen Kaigan suggest the capacity of digital photography to disrupt the truth of an event and to recall history with as much or as little reliability as the memory of the thinking, feeling human that can fashion such images.

Equally beautiful and disturbing are Indrė Šerpytytė’s black-and-white photographs of wood carvings that represent buildings in Lithuanian villages that were used for torture and interrogation by USSR agencies during the 1940s and 50s (Former NKVD–MVD–MGB–KGB Buildings, 2009-15). Šerpytytė, who was born in Lithuania in 1983, photographed the original buildings, commissioned wood carvings of each and then re-photographed the carvings against low-contrast grey backdrops, and the installation here includes both the photographs and the carvings. Although her project has a far less clear relationship with digital technology (the photographs are mostly gelatin silver prints and the wood carvings are physical objects), it mimics the mediating process of memory, examining the way in which sites and the events that they symbolise become distorted and gain and relinquish meaning through the act of representation and re-representation. Here, this distortion results in a toy-like anti-monumentalisation of the apparently serene, unassuming houses that were the unlikely arenas for political oppression.

It is perhaps inevitable that the concepts of digital virality and appropriation feature in several photographers’ work in the show, but none explores this more engagingly than David Horvitz (b1982) with his artist book Mood Disorder 2015. Horvitz took a photograph of himself with his head held in his hands, uploaded it to the Wikipedia page on mood disorders and watched how it was reused by various different media outlets to accompany articles on mental health. Reproduced in spreads across the gallery wall, his book project documents and archives the life of this anonymously produced image as it succumbed to, and reinforced, the stereotypical representation of distress, purely by means of the semantic residue that became attached to it via its circulation. More problematic is US collective DIS’s colour video Positive Ambiguity (beard, lectern, teleprompter, wind machine, confidence), 2015, which purports to examine the cross-dressing popstar Conchita Wurst’s political and social power as an icon of European culture. The premise of the work is that Wurst’s reputation has arisen as a result of viral activity and social networking, with the artists turning her into a copyrighted brand, courtesy of a MoMA watermark. Yet the video itself does not carry the full weight of the message: Wurst is writ large in high definition, but the work seems mainly to reproduce the manifestations of her position as a “symbol of queer identity” rather than to interrogate the media culture that is its root, or the nuances of the digital persona as opposed to the real.

US artist Lucas Blalock’s colourful still-life pieces are among many works on display that use the technique of digital collage. Cloning and stamping tools have been employed by Blalock (b1978) to create undulating, repetitive patterns across the composition. Although absorptive, these works appear to use technological tools of image-making without necessarily considering the implications of repainting and retouching reality – perhaps intentionally so. By contrast, John Houck’s take on collage involves him reconstructing arrangements of items from his childhood and photographing them as post-facto still lives. For Houck (b1977), this process served as an act of revisiting and reconsidering early experience through the staging and framing of a once-familiar scene. In specific works such as Pointing Device 2013, Houck also challenges the eye’s perception of light, depth and the tangibility of objects by layering paper into a collage and re-photographing it to produce a clean and flat, but highly realistic image.

Yet it is Israeli artist Ilit Azoulay (b1972) whose work steals the show at this year’s New Photography. Her wall-based installation Shifting Degrees of Certainty 2014 consists of a multitude of differently sized and shaped photographs and photomontages that document specific objects and sites that she encountered when living in Berlin. Numbered references in the bottom corner of each correspond to a track on an accompanying audio-guide that gives a description of the object or place, its provenance, its function and her experience with it. For instance, several photographs in one frame show Berlin’s KW Institute for Contemporary Art with a large crack down its exterior wall, caused, we are told via the audio-guide, by building work taking place on a neighbouring structure. The combination of sound and imagery and the haphazard way in which the photographs are hung lend the installation a certain animating impulse, as if presenting a multidimensional and multisensory collage of the city as Azoulay knew it. The result is a personal archive and an attendant cultural mythology that makes links between the networks and connections of the city and those of the brain’s sensation, emotion and memory. Although not supplied by Azoulay, a comparison seems to offer itself between these types of connection and those of digital networks, pointing to the fact that technological connectivity has become another facet of physical experience, or at least another of its facilitating or mediating agents. 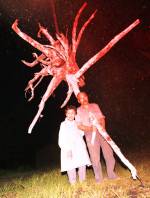 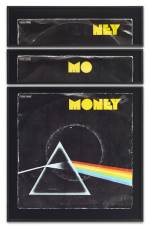