This show, spanning 50 years of Gilbert’s career, is not only a record of the artist’s output, but a moving and intimate documentary of his own family life painted across half a century 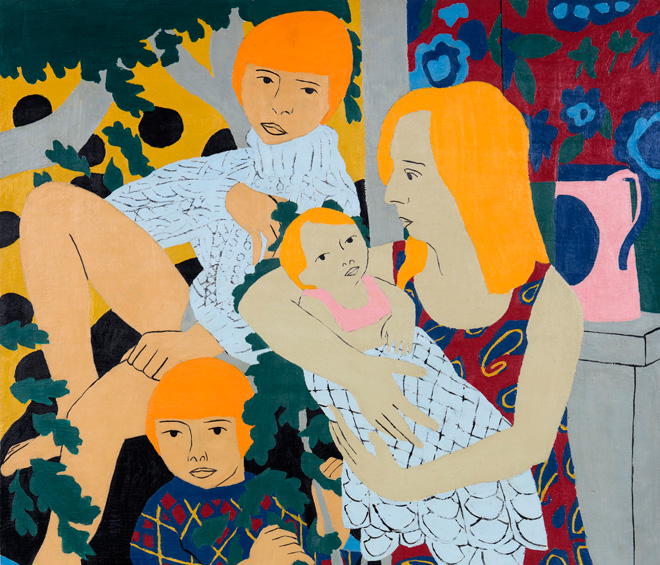 In the light-filled Tatha Gallery, which overlooks the River Tay and, beyond that, Dundee, 30 bright, intimate and intricate paintings by Norman Gilbert are on show. Spanning 50 years of his long career (Gilbert is now 92), these works not only provide a great overview of the artist’s work, and, indeed, an introduction to it for some, but they are also contained and succinct enough as a group to tell a moving story of family life, the artistic life, and the perseverance required to pursue both.

When I went to the opening night, what was immediately striking, beyond the vibrancy of the work itself, was the fact that the artist was surrounded by his family. As I walked around the exhibition, I realised that his four sons, two of whom were there that night, figured in the paintings, from boyhood until their adult lives. In Mother and Child (1969), for instance, the young mother holds a baby in a patterned blanket, as two older boys sit with her in a room crowded with flowers, fruit and the busy patterns of the interior decoration.

Cleverly layering colours to achieve a sense of coherence and liveliness, Gilbert subtly communicates the business of family life – the various perspectives, moods and voices ever at play, simultaneously. As he explained recently: “I try to make each colour and shape enhance every other colour and shape, so it’s entirely satisfactory, so it’s at peace.”

In Children and Bridges (1969), four children sit with Glasgow’s bridges in the background, stretching over the River Clyde, in a measured and balanced composition that complements the carefully chosen colours – predominantly shades of green and warm yellows.

With the falling leaves and stylised figures of the children, Gilbert achieves an interesting combination of movement and structure, a feeling of a dance, almost, in which different steps work together harmoniously. In People and Black and White Patterns (1972), this use of the figure with background structures achieves quite a different effect; there is a sense of dissonance in the way in which the two male figures sit, quite morosely, as the female figure tends to a young child. Again, the reality and beauty of family life is subtly observed in this careful, intricately detailed group scene. Throughout these works, the attention paid to these figures by the father, the artist himself, is touching. There is a consistent and loving commitment to seeing and documenting their lives as they grew up.

Across the work, too, the use of pattern is fascinating. Seeing highlights from throughout Gilbert’s career, from the 1960s until the last decade, the various patterns included, especially those from textiles, provides a sort of cultural history, as well as contributing to stylised invocations of family and other social scenes. In The Red Van (1977), the striped shirts, checked trousers and floral fabric of the interior are very much of their time. In Embrace II (1971), too, the leggings and trousers worn by the kissing couple are particularly striking and compelling. This intricate detailing also contributes to an interesting synthesis between figure and space, a project that Gilbert has clearly persevered with over his lifetime.

It is interesting, then, to see how the artist has developed these ideas in recent years, departing from painting figures in group scenes, and turning his attention to his immediate environment – the courtyards, balconies and plants in his home in Glasgow’s Southside – for the first time in his career. Tubs, Trees & Tenements (2010), The Cellar Stair (Ferns) (2010) and Plants (2018), shown in the beautifully lit, smaller back room of the gallery, all present brilliantly detailed and carefully layered compositions that bring to life both natural beauty and a sense of warm domesticity. A short film, accompanying the exhibition, shows the complex process involved in these paintings, and the ways in which Gilbert strives for visual harmony.

In perhaps the most arresting painting in the exhibition, Chair III (2018), which shows Gilbert’s late wife, Pat, in an armchair in their home, these interior details are used to show the gradual passing of the artist’s great love, in an original and moving manner.

While Pat sits in an armchair, she is at some distance away; another chair lies empty just in front of her. In other paintings produced shortly afterwards, as shown to me at the exhibition by one of Gilbert’s sons, there are only empty chairs, showing the deep absence of Pat after her death, as well as the home they created together. The heavy presence of love and longing is clear in these subtle, but harmonious scenes, showing a hard-won sense of acceptance, and a deeply personal, poignant response to bereavement.

These paintings are truly original and a rare testament to the sacrifices and joys of family life. Tatha Gallery has curated an exhibition that celebrates the fusion of art, love and life in a considered and moving way. 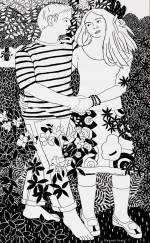