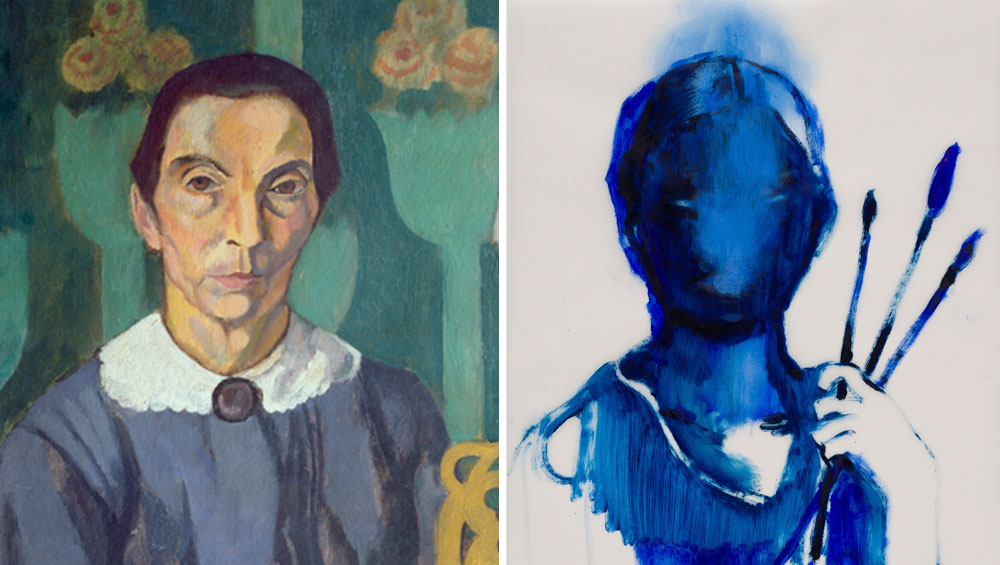 It is too early tally Covid-19’s cost to culture. But the experience of Charleston, a 17th-century farmhouse outside Lewes, East Sussex, indicates how severe the damage has been. Charleston was bought by the Bloomsbury Group painters Vanessa Bell and Duncan Grant in 1916, and became one of the centres of their activity. Painted by the artists and their friends, it is a treasure-trove of early 20th-century art and design, a modernist take on the frescoed Renaissance palazzo, flanked by a luscious tulip garden. The house, its inhabitants and its visitors figure so prominently in English modernism that it is difficult to imagine it disappearing. 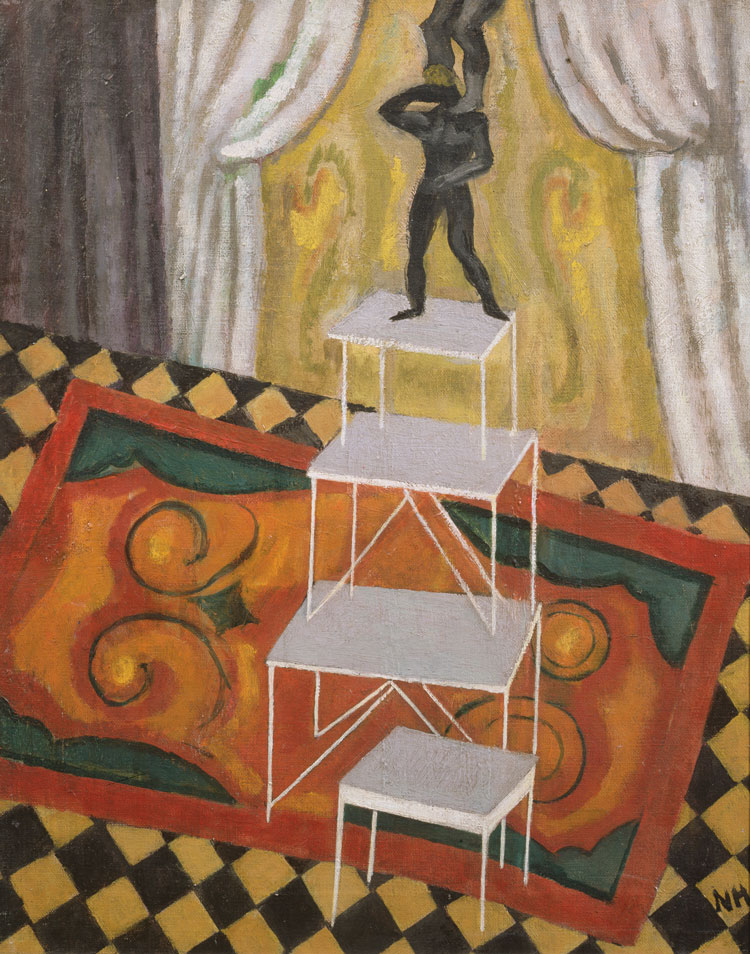 Charleston enjoyed a record 2019, bolstered, no doubt, by a recently built suite of galleries that allowed it to organise exhibitions that connect thematically with the house’s history. But 2020 saw it brought to the brink of closure. Only tireless fundraising allowed the museum to survive the loss of admission charges. As lockdown restrictions ease this summer, hopefully it will flourish again.

When Charleston reopens on 19 May, it will also unveil a pair of single-artist exhibitions that zoom in on the complicated relationship between artist and model – apposite for a house, the residents of which often painted each other. The subject of the larger exhibition, the Welsh painter Nina Hamnett (1890-1956), was herself painted by the Bloomsbury artist and critic Roger Fry. A one-time employee at Fry, Bell and Grant’s Omega Workshops, she skirted the group’s fringes; a small work of hers hangs in one of Charleston’s corridors. Hamnett’s exhibition is accompanied by a gallery of work by the South African artist Lisa Brice (b1968), whose pictures subvert the male-gaze depiction of the female nude that has dominated art history. 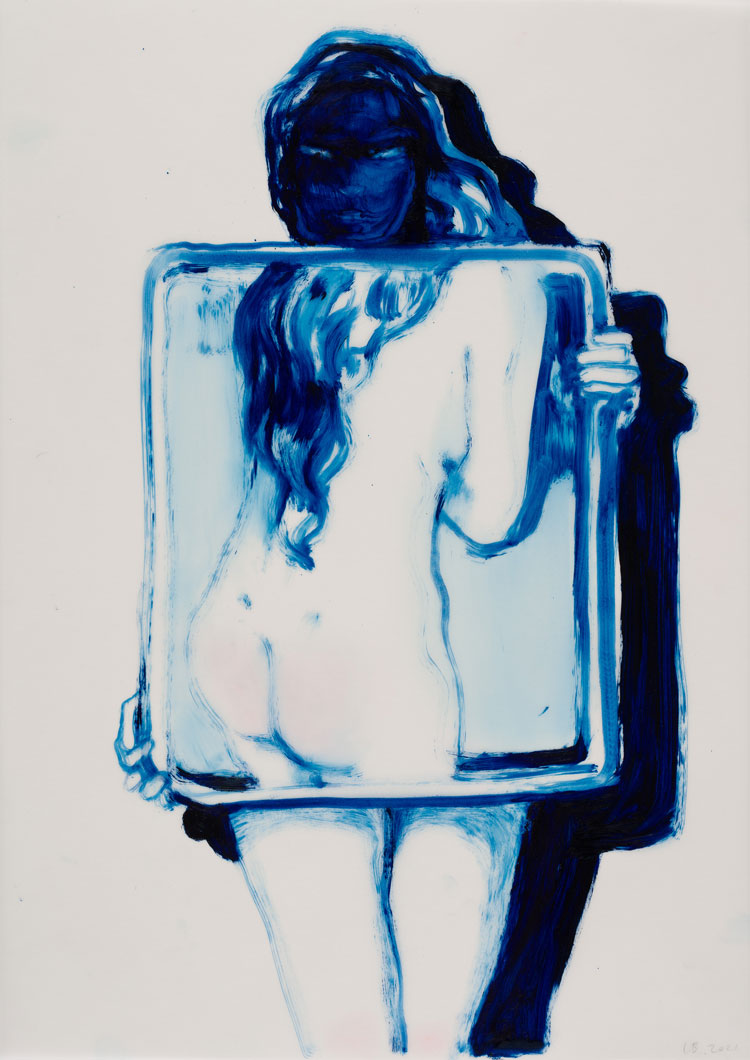 The Hamnett exhibition is the first retrospective of her work, six and a half decades after her death. Hamnett has become, in the words of the Charleston director and show curator Nathaniel Hepburn, “a footnote in art history”: a decline almost certainly hastened by her gender. This exhibition was initially planned to focus on her role as a model. An antechamber includes two Fry portraits of Hamnett, both painted in 1917. The larger of the two has her dressed in Omega fabric, assured and determined, with tired eyes that stress her role as a working woman. These are accompanied by Henri Gaudier-Brzeska’s bronze The Dancer (1915), a sinuous, fluid work that shows the nude Hamnett in a state of entranced abandon.

Gaudier-Brzeska and Hamnett were friends and lovers. One of her lightning-quick drawings captures the doomed sculptor nude, crouching down to touch his toes. He was one of many artistic playfellows. Moving to Paris in 1914, Hamnett immersed herself in the city’s storied avant garde. She met Amedeo Modigliani on her first night at the Café de la Rotonde in Montparnasse, where she later befriended Pablo Picasso, Serge Diaghilev and Jean Cocteau. She moved into the artists’ colony La Ruche. Vivacious and amenable, she became renowned for her dancing, whether in men’s clothes on the street or naked atop cafe tables. But throughout it all she was working hard at her art.

The exhibition at Charleston draws together about 50 of Hamnett’s paintings and drawings, largely from the decade between 1913 and 1924, when she jumped back and forth between Britain and France. The emphasis is on portraiture, a genre in which she excelled. “My ambition,” she wrote, “is to paint psychological portraits that shall represent accurately the spirit of the age.” Whether she succeeds in this aim, she certainly balances skill with a sharp perspective. Her portraits, said Walter Sickert, an early admirer, “are not those of an employé.” 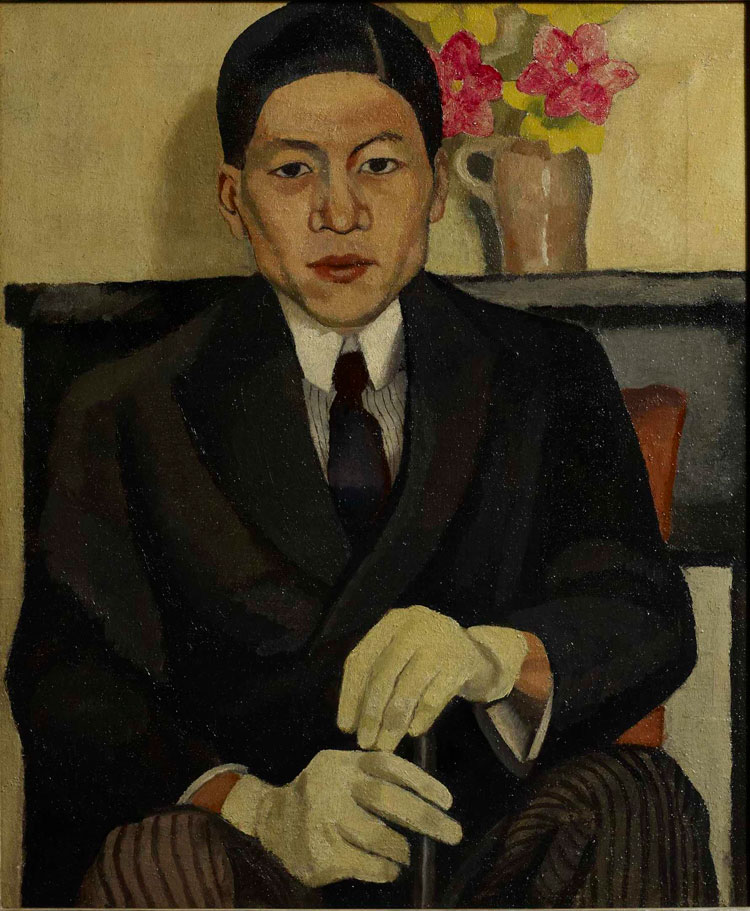 One of her largest pieces, from c1920-21, depicts a monocled young man in smart attire, top hat and cane in hand. Tilted towards the caricature of the Neue Sachlichkeit movement then taking off in Germany, it appears to exaggerate its subject’s stiffness and self-importance to the verge of parody, albeit subtly enough that it might pass him by. More often, Hamnett’s work is measured and respectful. A middle-aged Sickert (1919) has a penetrating gaze. An undated painting of the Japanese dramatist Torahiko Khori shows him clear-eyed and assured, while the sculptor Ossip Zadkine (c1914) demonstrates an earnest intensity, albeit one counterbalanced by the anguished visage of one of his craggy busts.

Hamnett gloried in overturning her era’s norms. In 1917, she painted Lady Constance Stewart Richardson, whose semi-clad dancing had seen her rejected from British polite society, as a serious, respectful woman mourning the death of her husband in the first world war. If Hamnett’s women tend to be solid, active, even forceful – a rebuttal of contemporary insistence on the dainty and demure – her men often demonstrate a softness. 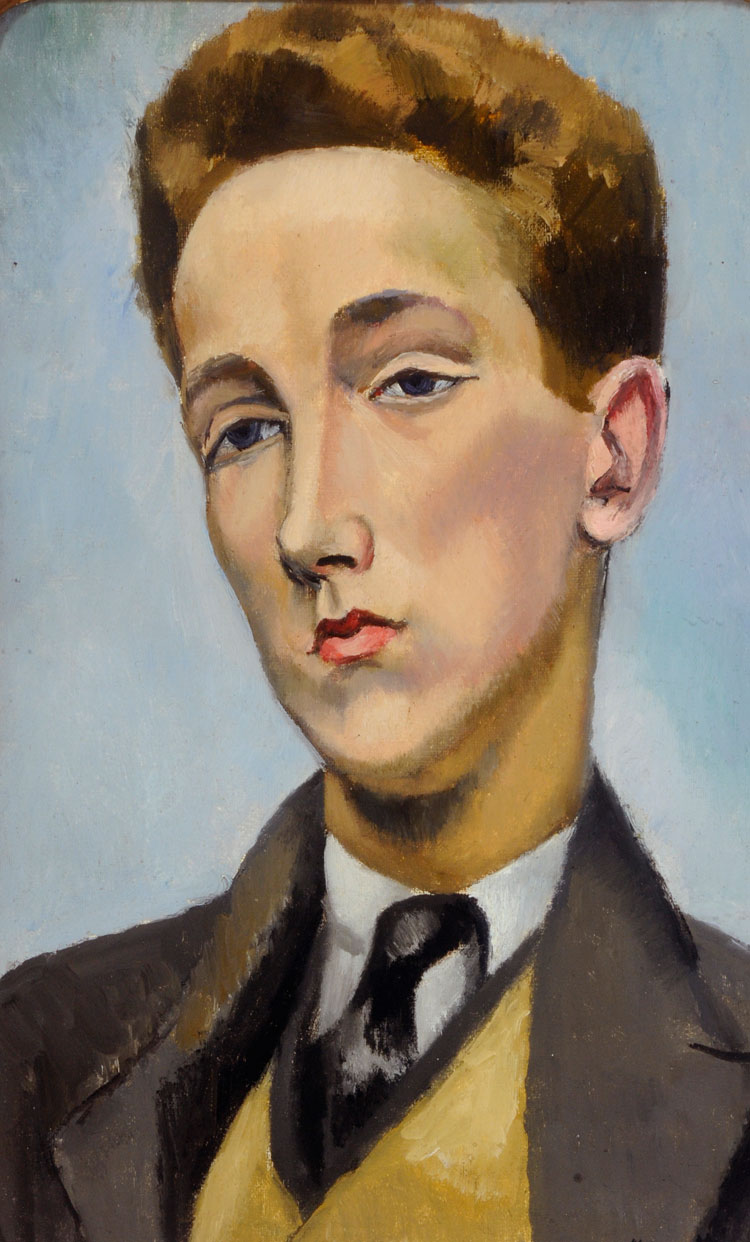 A 1922-23 portrait of the dancer Rupert Doone has him wearing makeup, including lipstick, and what might be false eyebrows, in a proto-David Bowie androgyny. One particularly fascinating work, c1918, has a dark-skinned young man reclining in a pose usually reserved for female models. He sits in an open, conversational pose, brandishing a glass of wine, as if modelling is secondary to the pleasure of Hamnett’s company.

It is in her drawings that Hamnett lets loose. Writing on her first solo exhibition in 1918, Sickert praised them for their “startling virtuosity” and considered them “sculptor’s rather than painter’s drawings” for their focus on contour and modelling. Pencil sketches of herself, probably from a mirror, show her trying out a range of postures. She produced numerous male nudes, from muscular life-models to spindly, knotty little creatures. One 1918 study shows Fry almost abject, curled up in a ball, holding his head to his hand, the lines of his ribcage protruding through the flesh. 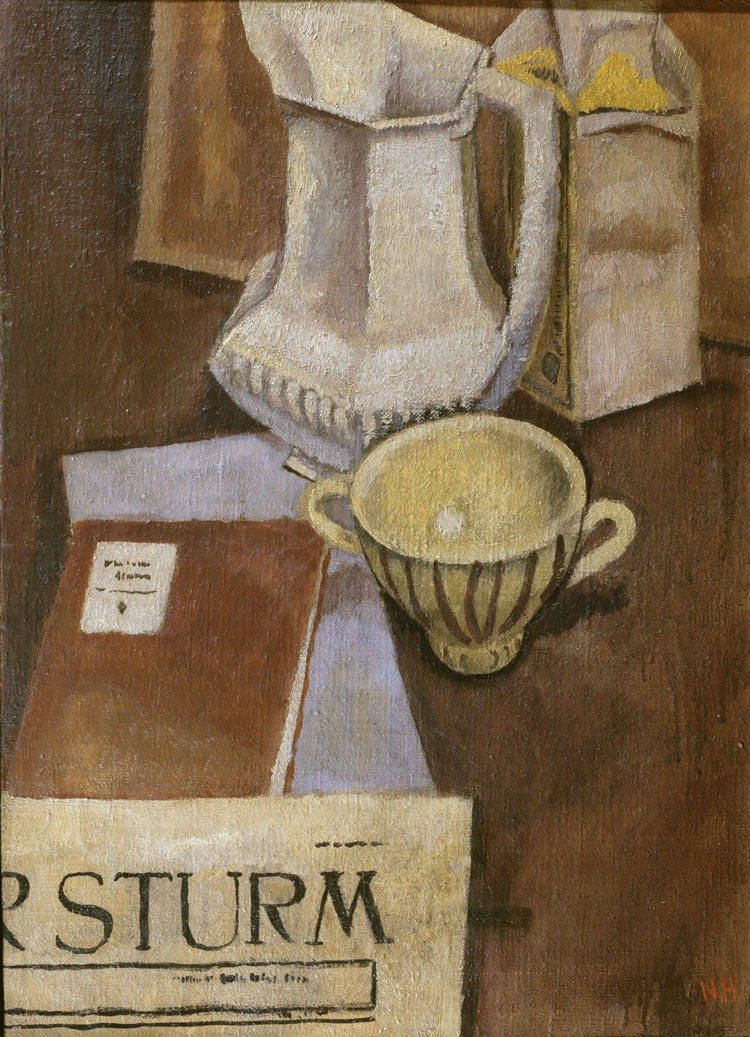 For all her exploits in bohemia, there is a sobriety to much of Hamnett’s work. The daughter of a disgraced colonial officer who became a cab driver, she was no stranger to the dreary side of modern life – chipped china, dour landladies, bricky rooftops. “Nina Hamnett,” wrote Virginia Woolf in a letter to Bell, “does roofs; why are you artists so repetitious; does the eye for months see nothing but roofs?” Woolf’s affluence might have blinded her to the meagreness of less rarefied urban existences. Hamnett’s still lifes capture the humdrum clutter of her grimy apartments: half-full wine glasses, a slightly scrunched-up carton, the German art journal Der Sturm. A 1919 painting from a summer holiday to Collioure even drains the colour from that Fauvist paradise, giving a garden the aspect of a prison yard.

Hamnett returned to London for good in the mid-20s. Her 1932 autobiography, Laughing Torso (1932), a frank portrayal of her struggle to become acknowledged as an artist, was a bestseller. But the triumph was shortlived: an unsuccessful libel suit by Aleister Crowley drained her finances. She fell into alcoholism, propping up Fitzrovia bars like a character from a Patrick Hamilton novel; it would be interesting to see the work that remains from this period. She died in 1956, impaled on a fence after falling out of her apartment window. Her reputation diminished soon after. 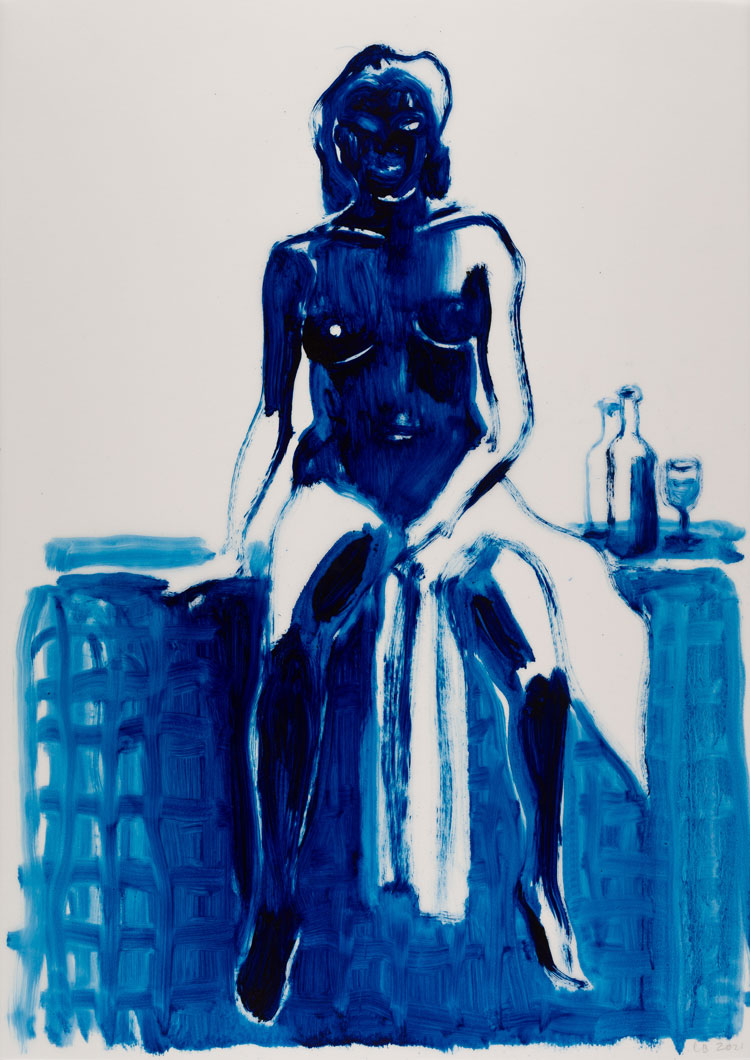 While her retrospective begins the rehabilitation of Hamnett’s art, Brice’s new oil on paper works celebrate her spirit. All Untitled (2021), and painted entirely in shades of blue, they present snapshots in the lives of imaginary, unnamed female artists, almost always nude, often smoking. Some of the poses are modelled on Hamnett: a particularly arresting work imitates the press photograph from Laughing Torso. Others have a surreal tinge. There are numerous mirrors. In one painting, a nude artist holds a painting over her torso depicting her back; another looks down at her own body for a L’Origine du monde-esque work. These are women who, like Hamnett in her drawings, use themselves as a model, and, by doing so, take control of their bodies. 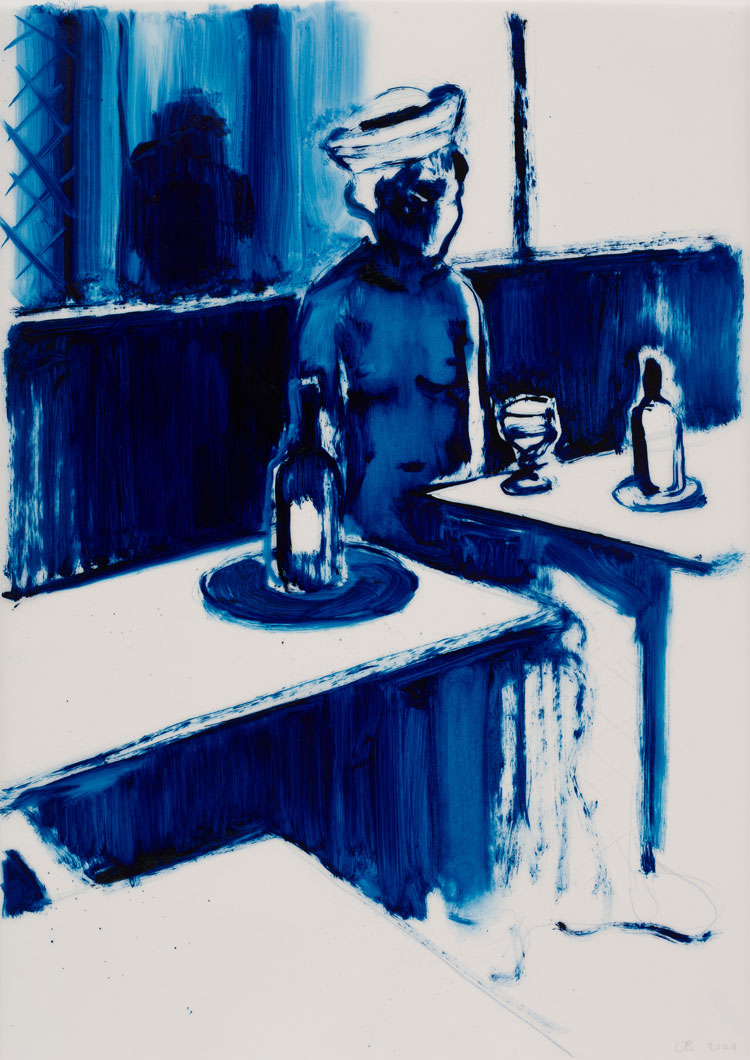 Brice’s monochrome technique is impressive. One piece depicts a cafe scene in blue and white alone, with figure, objects, light and shadow all rendered though different thickness of oil. Arresting, too, is her subjects’ casualness: Brice’s women are found in moments of ease, a quality shared with many of Hamnett’s best portraits. Despite the century that separates Hamnett from Brice –  and the enormous gulf in style – I imagine the old bohemian would approve. 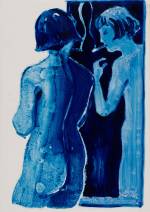 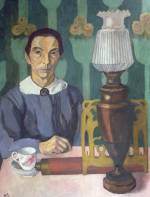 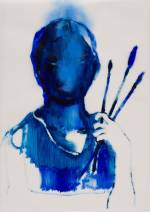