This landmark retrospective highlights the breathtaking variety of Goncharova’s output, from religious painting to Russian folk art to designs for French fashion houses and costumes for the Ballets Russes 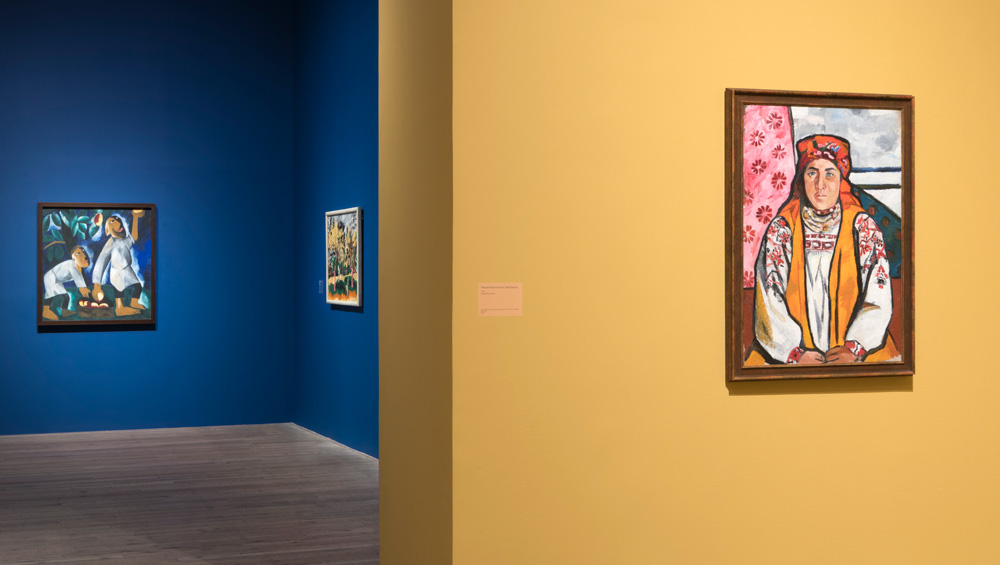 Born in Tula Province in the Russian countryside in 1881, Natalia Sergeevna Goncharova seemed destined for an artistic career from the beginning. When she graduated from the Fourth Gymnasium for Young Ladies in Moscow in 1898, she immediately began attending the studio of a local sculptor. In 1901, aged 20, she enrolled at the Moscow School of Painting, Sculpture and Architecture where she first struck up a friendship with Mikhail Fedorovich Larionov, who later became her life partner.  After a short period in the faculty of sculpture, in 1903, she turned to painting. 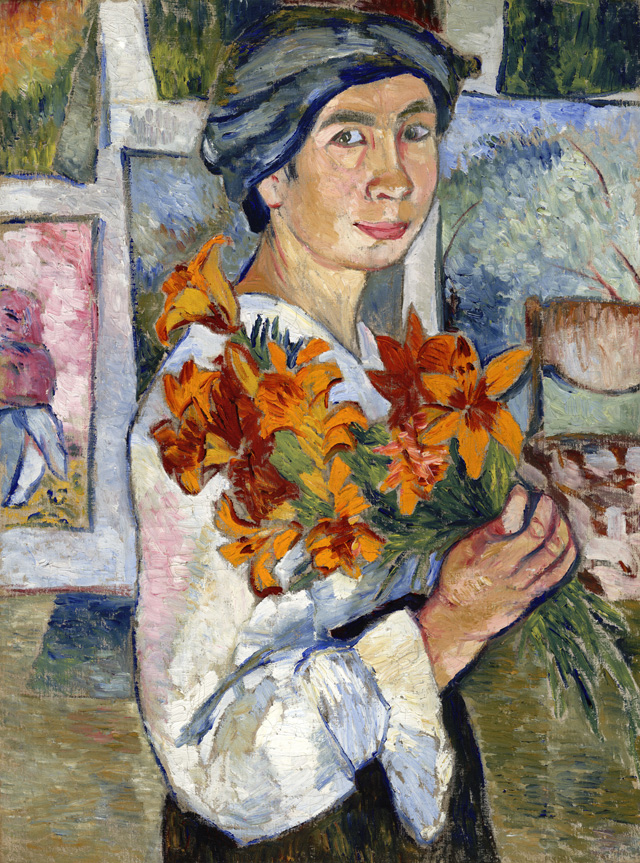 In her Self-Portrait with Yellow Lilies (1907-8) Goncharova presents herself with a mischievous glint in her eye. Her personal fashion sense was bold and bohemian and elements of that play out in her designs for Nadezhda Lamanova’s fashion house in Moscow and, later, when living in Paris, for the House of Myrbor.

In Moscow in the early-20th century, Goncharova was exposed to modern European painting through the collections and exhibitions of the businessmen Ivan Morozov (who also acquired works by Goncharova and Larionov) and Sergei Shchukin. Works by Pablo Picasso and André Derain were especially important to her development at this time. Yet she never lost sight of the arts and crafts of the Russian countryside, and this exhibition opens with examples of traditional costumes and tools alongside her paintings. The mask-like faces of the monumental figures in Peasants Picking Apples (1911) relates to Scythian stone figures that Goncharova had seen in southern Russia. 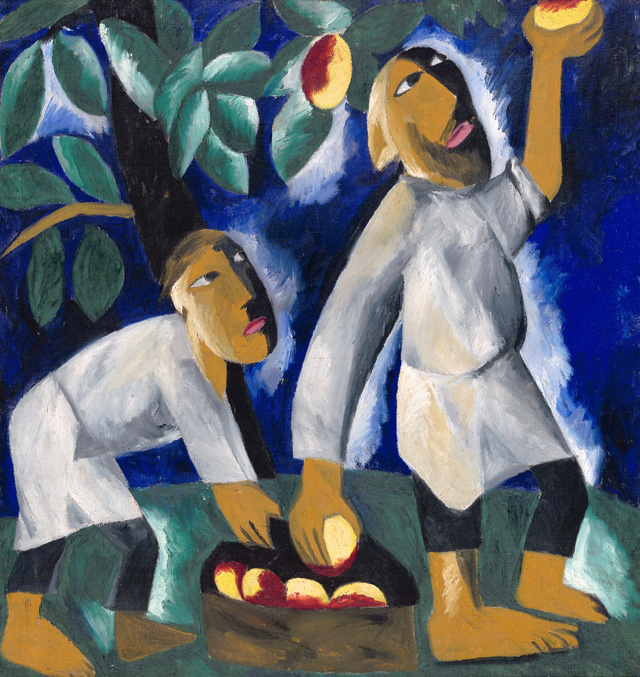 By 1912, Russian art had become even more important to Goncharova and she and Larionov pursued the establishment of a school of painting based on Russian art – icons, lubok prints, signboards, painted trays, children’s toys and folk art. The following year, in 1913, a huge retrospective of Goncharova’s work, with more than 800 works opened in Moscow. The Tate has attempted to restage something of this ambitious undertaking as a central feature of its current exhibition but displaying just 29 paintings. The diverse range of her work is what led Larionov and the writer Ilia Zdanevich to coin the term “everythingism” to describe Goncharova’s breadth of styles and influences. The 1913 exhibition included paintings, works on paper, fashion, textiles, theatre design, popular prints and more. 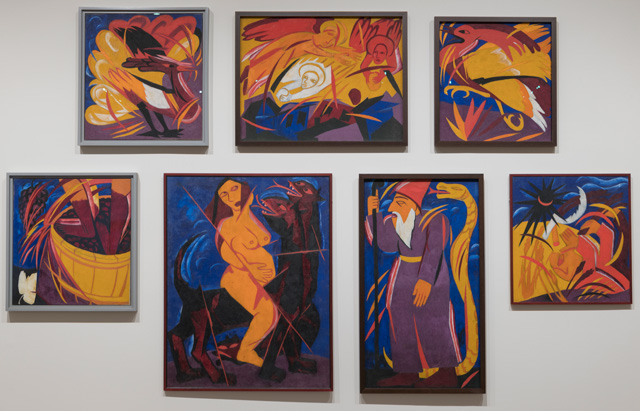 While the Tate gallery space given over to the 1913 exhibition gives a taste of this diversity of making, it is the reconstruction of Goncharova’s nine-part Harvest (1911) that dominates and transfixes the viewer. The impact of the work is in part due to its scale and vitality, but also its presentation as a reconstruction. There is a still current curatorial taste for reconstructions and, in this instance, the installation of Harvest transports us back to 1913, despite only seven of the nine panels remaining. 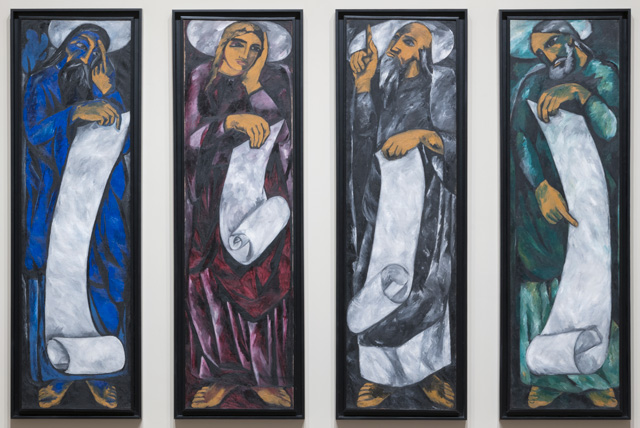 Goncharova’s diverse sources, influences, media and subjects included religious works, drawing directly on the imagery of Russian devotional icons and popular lubok prints. Engaging with traditional religious imagery was challenging and the Russian authorities removed The Evangelists (1911) from display in a 1912 group exhibition. The extensive 1913 exhibition placed the religious works in a separate room. Even then, they were once again censored and removed when the exhibition reached St Petersburg. Today, these are some of the strongest works in the exhibition and their display in a separate gallery space underlines their tumultuous history. 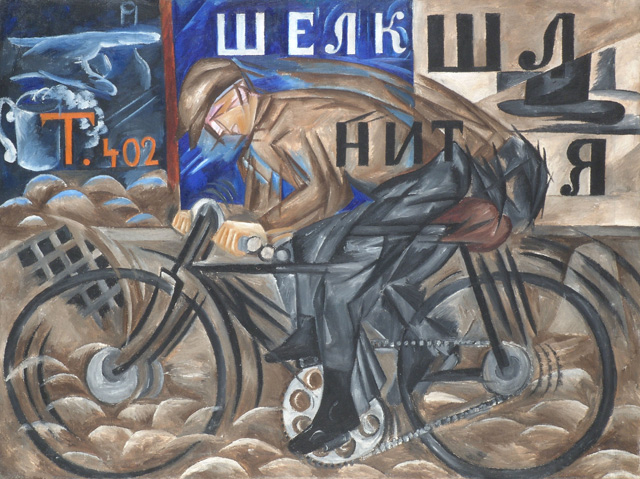 Around 1912-13, and in common with artists in other countries, Goncharova began to look for ways to celebrate the modern age. Responding to Italian futurism, she turned to urban subjects and the portrayal of machines and movement claiming: “The principle of movement is the same in the machine and in the living being.” With Larionov, she developed rayonism, an early form of abstract art characterised by interacting linear forms derived from rays of light. 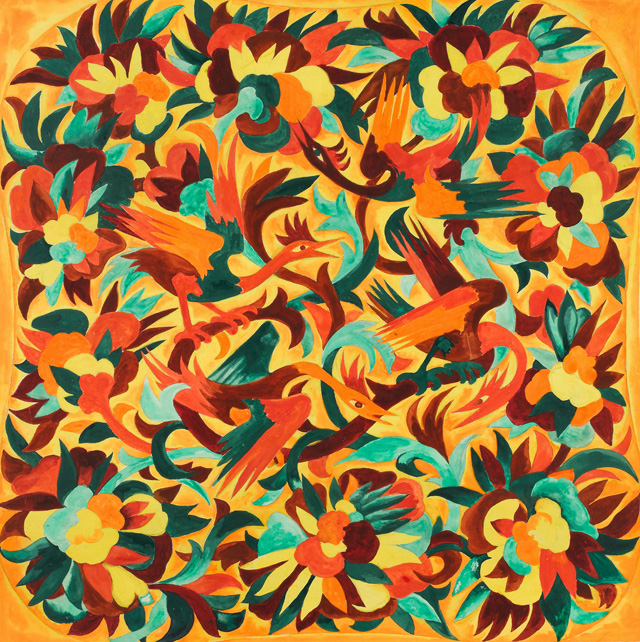 Goncharova first arrived in Paris in April 1914 when she and Larionov travelled from Moscow. They had been invited by Sergei Diaghilev to work on set and costume designs for his ballet-opera Le Coq d’Or (The Golden Cockerel). When the first world war broke out in August that year, Larionov was called up for military service in the Russian army. He was wounded within weeks and demobbed as unfit for combat. For her part, Goncharova created a series of lithographs, Mystical Images of War (1914), picturing the tragedy and patriotism of war. 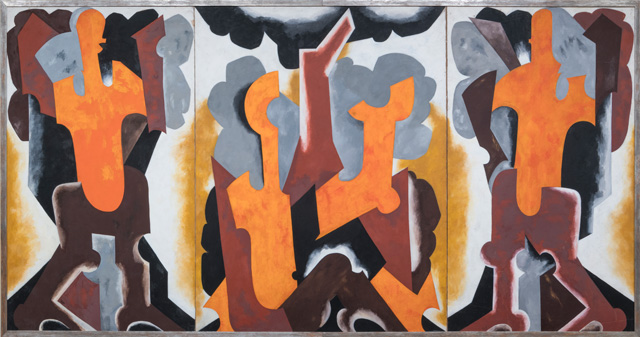 In 1919, Goncharova moved into the Paris flat that would be her home for the rest of her life. During this time, she exhibited in Europe and the US, receiving commissions for fashion, costume and interior design. Having a studio, large-scale works were once again possible for her. One such work was Bathers (1922). Goncharova later adapted part of the design for a poster for a ball she co-organised for the Union of Russian Artists in Paris in 1923. 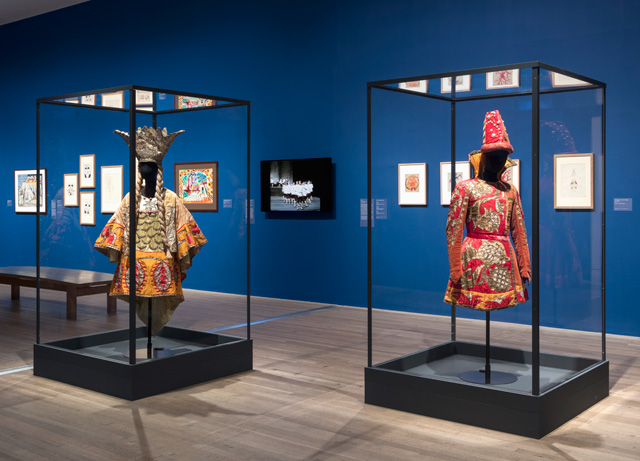 Despite her varied outputs over the years, Goncharova was perhaps best known for her contributions to theatre design. The final room of this exhibition features her work in theatre and it is something quite special. From film recordings of performances and photographs of rehearsals, to costume, choreography and set design and surviving costumes and recordings of music by Nikolai Rimsky-Korsakov and Igor Stravinsky, the assembled artworks and artefacts create an atmosphere of experimentation and creative excitement. That said, I would have liked to see the films on larger screens with seating from which to watch them, rather than having to stand in front of small wall-mounted screens. Goncharova’s work with Diaghilev and the Ballets Russes was extensive, and the presence of costumes alongside film footage of dancers performing in them gives due emphasis to the challenges Goncharova must have faced in creating artistically exciting costumes that remained practical for gesture and movement. It is an enchanting finish to an engaging exhibition and the strains of Stravinsky across the gallery floor almost had gallery-goers dancing. 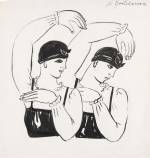 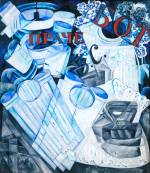 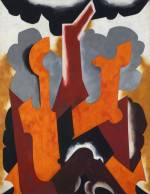 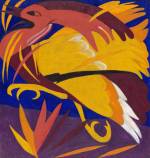 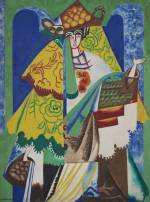 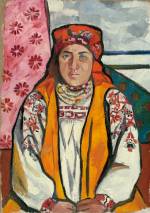 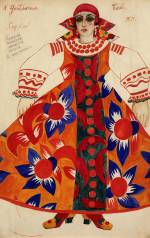 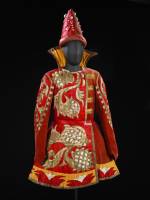