In 1972, the year before artist Jeremy Moon's untimely death in a motorcycle accident, Peter Fuller described his large acrylic canvases as studies 'of the possibilities and potentialities of the grid structure, both exploded and intact, when exploited in the context of an intimate and involved relationship with colour'.1 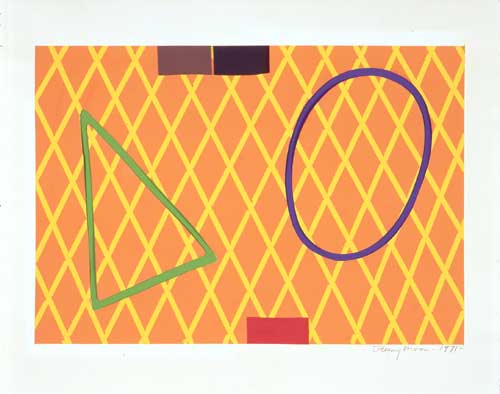 Fuller's observation that Moon's canvases were deceptively simple also holds true for the artist's experimental works, from his largely untouched estate, which were recently shown at the Rocket Gallery in London:

The eye scans and apparently 'reads' them in a moment; but if the act of looking is extended to the intellectual process of perceiving, they reveal complicated and elaborate visual metaphors. Paintings from which illusion appeared to have been banished in the purist Minimal tradition, in fact ripple with extenuated ambiguities.2

This exhibition at the Rocket Gallery in Burlington Street (the gallery has moved since the exhibition)3 celebrated the short career of abstract artist Jeremy Moon, featuring experimental works including drawings, pastels and collages. The title of the exhibition comes from a review in The Times of Moon's exhibition in 1965. In 1973, Moon's career was cut tragically short when he died in a motorcycle accident at the age of 39. He belonged to the generation of British artists whose first experience of contemporary art was that of the American art of the 1960s, encompassing a wide range of work from Abstract Expressionist painting to the post-painterly Hard Edge style. Moon chose the latter and painted and exhibited prolifically. He held almost annual solo exhibitions at the Rowan Gallery in London (established in 1962), from 1963 until his death. Moon was one of his generation to view the 'Situation' exhibition in 1960, which had a considerable impact on English art. Moon's exacting and pure compositions, which often echo the movements of dance, one of his great passions, reveal something of his character, as described by Barry Martin when he reviewed the Jeremy Moon Retrospective at the Serpentine Gallery in 1976. According to Martin, 'Jeremy Moon (1934-1973) was the most morally aware artist I have met and almost to the point of obsession was self-critical.'4

Norbert Lynton, who taught with him at Chelsea School of Art and knew him personally, claimed:

His work was always admirable. It was always strong and clear and more interesting with time than the first, apparently all-discovering glance suggested. Though some of his one-man shows presented a closely interrelated sequence of work, one never felt he was content to repeat himself or amuse us with superficial variations. The work was always vivid, well-made, and from show to show surprising in form though consistent in idiom.5

Moon's career was, in itself, interesting; he worked in advertising before completing a law degree at Christ's College, Cambridge. After his university education, he took six months of intensive ballet classes, five nights a week. Choreography subsequently informed his visual art, infusing it with a particular conception of movement, balance and harmony. Moon's first artworks were sculptures and he was awarded the sculpture prize at the Young Contemporaries in 1962. In 1963 he began teaching sculpture at St Martin's School of Art. In 1966, having established a regular exhibition record, he moved to Kingston, where the studio he built there still exists in much the same condition as when he died in 1973.

Moon had a critical intelligence and sense of purpose in his work:

I usually have a fairly clear idea when I start work; the more the painting develops, the more I become aware of the difference between what I planned to do and what I have actually done. The process of finishing the picture, therefore, is, to a certain extent, a question of coming to terms with what I've actually done and relinquishing the original conception. The final stage - getting the picture to work as I want it to - always goes on longer than I expect. I just keep on looking at it and working on it week by week, until I have taken it as far as I can - which is sometimes too far - then it's finished.6

In Studio International, in September 1967, he made the distinction between picture and painting:

The problem with the shaped canvases has been that if the outside shape of the painting is too complete in itself, it somehow closes off the central area of the picture and when that happens it's no longer painting for me and I'm no longer interested or satisfied.7

Early the following year, Studio International published Charles Harrison's review of Jeremy Moon's 'Recent Paintings', in which he described him as a highly professional painter, 'dedicated to a very demanding and very unadulterated conception of painting'. Harrison wrote:

The central preoccupation in Moon's painting has always been, it seems to me, the attempt to use colour meaningfully in a wholly non-representational and progressively non-illusionistic context … Intellectual and manual control over the process of painting are important for him, and this means that he has tended to view painting, at the working stage, as a process of realisation rather than revelation. We have no Jackson Pollock in Europe to illustrate how rapidly sensation can become paint or how inseparable, at the ultimate point, the two become; and Moon sees himself, I think, as very much part of a European tradition in which Matisse was the last great landmark.8

Jeremy Moon had strong views about art criticism; particularly that it developed too fast and often to please the art world. He pointed out that the making of art was a slow, personal process. Peter Fuller could well have been creating a parallel between Moon's compositions and the 'Triadic Ballet' (1919), produced by Oskar Schlemmer during his time at the Bauhaus in Berlin. A work of remarkable power that crosses disciplines with its command of architectonic space, Moon must have been aware of it and have aspired to Schlemmer's original achievements:

The artist may have been motivated by purely formal considerations but he achieves, in the end, a painting reminiscent of a frozen scene from some strange, symbolic mechanical ballet.9

There is no telling what Moon would have achieved had he lived into old age; the commitment of the Rocket Gallery to the career of this original and important artist is to its credit.